On its 20th anniversary, we look back at a beloved action-adventure that still endures, thanks to a fantastic cast and a classic Spielbergian template. 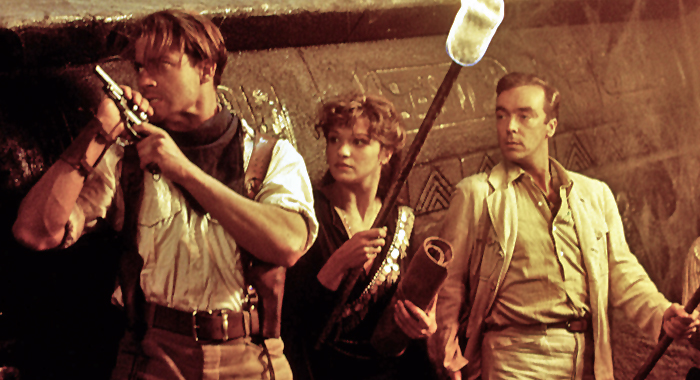 Rick O’Connell defeated the Mummy 20 years ago today, but as Imhotep liked to say, death is only the beginning. The Brendan Fraser-led action-adventure remake of The Mummy has proven to be as enduring as its titular bandaged baddie, and ’90s moviegoers of a certain age still remember the film fondly.

Although based on a black-and-white horror movie from nearly 70 years earlier, 1999’s The Mummy – released May 7 of that year – owes more to Harrison Ford than it does to Boris Karloff. With a swashbuckling sense of adventure, some supernatural spooks, and a stellar cast, Stephen Sommers‘ globetrotting spectacle recaptured Indiana Jones’ magic for millennials, swapping the Ark of the Covenant for a sarcophagus that never should have been opened, even if it was a blessing, not a curse, for moviegoers. How was it that The Mummy was able to channel Indy so successfully?

It Put a Fun Spin on Past Inspirations

Both The Mummy and Indiana Jones draw inspiration from the same era — not ancient Egypt, though that’s obviously a factor, but the films of the 1930s. When they created Indiana Jones, Steven Spielberg and George Lucas wanted to revive the spirit of old matinée serials and pulp magazines. Indy was the modern version of Doc Savage, an adventurer who explored strange new lands and braved thrilling challenges. By virtue of premiering almost 20 years after Raiders of the Lost Ark, The Mummy was able to invoke not just the spirit of those old serials in the same way, but also Indiana Jones itself, putting its own spin on the vintage tropes.

But The Mummy also benefits from its own history. 1932’s The Mummy, one of Universal Studios’ classic monster films, provided the 1999 movie its name and general plot, and the remake takes those ideas and runs with them. The original film is great, but it’s slower than the shambling monster itself, and there is actually very little “mummy action,” as modern viewers might define it. Boris Karloff is chilling as the creature, but he’s hardly in bandages, instead opting to blend into society and manipulate victims with his piercing gaze.

The 1999 Mummy effectively plunders the 1932 Mummy’s tomb, which seems fitting. It’s a good bit of grave robbing, though, as the remake does a genre switcheroo, infusing the old plot into another mold, one that Indiana Jones had so successfully revived, and makes it work spectacularly.

Brendan Fraser is Harrison Ford with a Goofier Smile 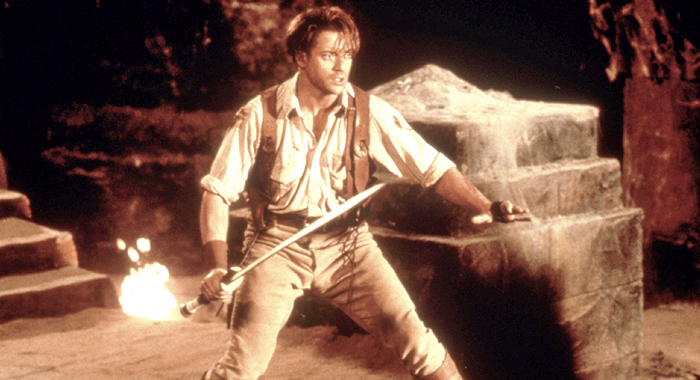 Brendan Fraser is still doing great work (he’s a delight as the voice of Robotman on DC Universe’s surprisingly good Doom Patrol series), but it’s hard to overstate just how hot he was in the 1990s, both as an acting commodity and as a hunk. Without Fraser, The Mummy doesn’t work, just as Harrison Ford is integral to Indiana Jones’ success.

As Rick O’Connell, Fraser is able to showcase a lot more of his chops than one might expect, effortlessly conveying our hero’s wide range of emotions across a variety of outsized set pieces and quieter moments. When we first meet him in prison, he’s a quip-happy nihilist who remains somewhat distant once he’s freed. On the voyage to the City of the Dead, O’Connell gradually opens up, finding his purpose, his courage, and a hankering for romance. Fraser has all the looks of a classic pulp hero, only he’s got the charm and the heart to make O’Connell more than just an adventuring straight-man.

In that way, Fraser’s not unlike Ford, who imparts Indiana Jones with just the right mix of world-weariness and wonder. If there’s a difference between the two, though, it’s that Fraser is more game than Ford. Whereas Ford makes characters like Han Solo and Indiana Jones work by keeping them somewhat at arm’s length — a subtle, constant eye-roll that lets viewers know not to take everything too seriously — Fraser is a puppy. There’s something indescribably late-’90s about the way his smile radiates in the role, his enthusiastic force of personality welcoming viewers into spooky tombs. Just as O’Connell couldn’t keep playing the part of the gruff veteran, Fraser can’t help but have a great time, and the audience loves him for that.

The Supporting Cast of Characters Belongs in a Museum

While it’s fun to watch characters like Indiana Jones and Rick O’Connell explore unknown lands, their journeys would be far less entertaining without other memorable characters to play with. Where’s the fun in an action-adventure if there’s nobody to trade witty one-liners with?

While Raiders of the Lost Ark has Karen Allen’s Marion Ravenwood, The Mummy has Rachel Weisz’s Evelyn “Evie” Carnahan. She’s a perfect match for O’Connell, as the two characters trade the high ground throughout the movie. When one makes a mistake, the other has the solution, and together they blur the line between courage and foolhardiness. Evie and O’Connell egg one another on, buoyed by Fraser and Weisz’s excellent chemistry.

John Hannah, on the other hand, offers plenty of comic relief as Jonathan Carnahan, who is in way over his head when it comes to this whole “ancient curse” business — think of Henry Jones Sr., Marcus Brody, or even Temple of Doom’s Willie Scott. The sniveling Beni (Kevin J. O’Connor), along with the group of rival American Egyptologists, serves as a fitting counterpart to the heroes, just like many of Indy’s ersatz foes. Oded Fehr also imbues personality into what could have been a stock role as Ardeth Bay, the leader of the guards who have kept Imhotep at bay for three millennia.

Then there’s Imhotep, the Mummy himself. As played by Arnold Vosloo (once he claims enough victims to graduate from emaciated CGI skeleton to flesh-and-blood human), Imhotep is an imposing villain, at times intoxicatingly so. He’s a larger-than-afterlife presence, making him an excellent foe for Fraser’s enthusiastic determination.

It Shares the Same Exaggerated Gung-Ho Sense of Exploration 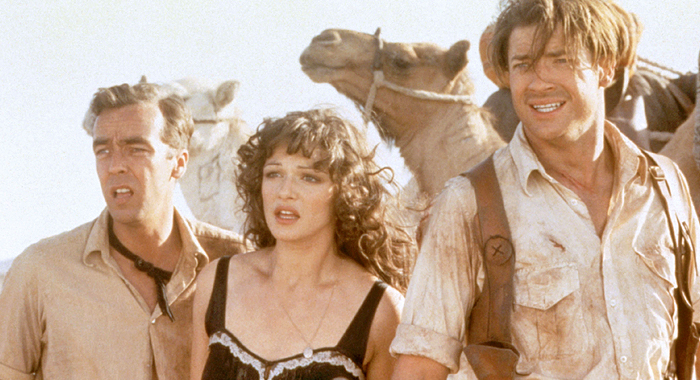 Indiana Jones is a bad archeologist, but he’s an amazing hero. Same with O’Connell and Evie, who are destructive grave robbers even by 1920s standards. That’s not the point of these films, though. The point is to go on an adventure, using the past and exaggerated mysteries of foreign lands as inspiration.

Watching O’Connell scream into a decomposing mummy’s face or watching Indy knock a Nazi into some propellers is a hoot, but the battles aren’t necessarily what make the films so memorable. It’s the journey into the unknown, following our friendly heroes into archaic, unfamiliar terrain.

The matinée serials and pulp magazines both franchises draw from harken back to a very specific era for exploration, one that didn’t ever truly exist as it appears in pop culture, yet feels very nostalgic. The characters of Indiana Jones and The Mummy both live at a turning point of world history, right at the cusp of what we’d recognize as the modern world. It doesn’t seem like there’s much new to discover, so instead, archaeologists Indy and Evie turn to history. And in the world of these films, there’s far more buried in the past than the modern world expects.

It’s a romanticism of sorts, one that’s not without its problems, but it makes for an exciting adventure at the crossroads of the past and the present, the intersection of the known world and the unknown.

Even though The Mummy is more of an action-adventure romp than a horror movie like its classic predecessor, there are still plenty of scares and suspenseful moments. Indiana Jones operates on a similar level, because it wouldn’t be as exhilarating to see Indy whip his way through danger unless viewers, on some level, really feared that danger. Still, even if you’re aware that The Mummy boasts a few scary moments, if you haven’t rewatched it in a while, you might be shocked at just how violent it is.

Raiders of the Lost Ark literally melts a dude’s face off during its climax when the Nazis open up the Ark of the Covenant, and who can forget the horrific sight of Mola Ram extracting a still-beating heart from a poor man’s chest with his bare hands in Temple of Doom? Taking a page from the same playbook, The Mummy blasts a bunch of excavators with acid, and that’s just a warm-up. Imhotep steals eyes and tongues from his victims, flesh-eating beetles gorge themselves as they crawl beneath the skin of their victims, and there’s plenty of torture. That the movie is technically pretty bloodless only makes the extent of the other gore even more shocking to watch.

Raiders of the Lost Ark is infamously rated PG, as the PG-13 rating hadn’t yet been introduced. The Mummy, on the other hand, does sport a PG-13 rating, but in classic Indiana Jones fashion, it pushes the limit. Archaeology is dangerous, violent business, or so these movies would have you think. But for those of us slogging through our decidedly less exciting everyday lives, adventures like The Mummy — and the Indiana Jones franchise before it — provided thrills and ignited our imaginations like few others did. We don’t get a lot of movies like The Mummy any more, and that’s perhaps why lots of folks still remember it with unparalleled affection. 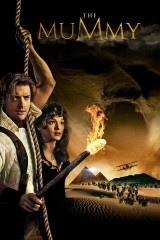 #1
Adjusted Score: 64496%
Critics Consensus: It's difficult to make a persuasive argument for The Mummy as any kind of meaningful cinematic achievement, but it's undeniably fun to watch.
Synopsis: The Mummy is a rousing, suspenseful and horrifying epic about an expedition of treasure-seeking explorers in the Sahara Desert in... [More]
Starring: Brendan Fraser, Rachel Weisz, John Hannah, Arnold Vosloo
Directed By: Stephen Sommers