The 70th Annual Primetime Emmy Awards featured a few of the awards show’s finest moments when it aired Monday night. The ceremony, hosted by Saturday Night Live’s Colin Jost and Michael Che, was telecast live from the Microsoft Theater in Los Angeles.

Aside from the big winners of the night — including Game of Thrones and The Marvelous Mrs. Maisel — here are a few of the biggest highlights from the show.


Celebrating the most diverse group of nominees in Emmy history, stars Kate McKinnon, Kenan Thompson, Sterling K. Brown, Kristen Bell, Tituss Burgess, RuPaul, Ricky Martin, and John Legend (with a guest appearance by Andy Samberg and the “One of Each” dancers) sang a satirical song of victory. Sandra Oh weighed in, “Thank you, but it’s an honor just to be Asian.”

Despite the diverse pool, only three of the night’s acting wins went to people of color: Thandie Newton for Outstanding Supporting Actress in a Drama Series for her role as Maeve in HBO sci-fi series Westworld; Regina King for Outstanding Lead Actress in a Limited Series or Movie for her role as Latrice Butler in Netflix drama Seven Seconds; and for Outstanding Lead Actor in a Limited Series or Movie, Darren Criss, who is only the second actor of Asian descent to be nominated for (and win) the category — Riz Ahmed was the first for The Night Of in 2017. Criss is half-Filipino like his character Andrew Cunanan in American Crime Story: The Assassination of Gianni Versace.


The beloved television and film actor won his first Emmy award for Outstanding Supporting Actor, Comedy Series for his role as Gene Cousineau in HBO’s Barry. “I wrote this 43 years ago.” Winkler said of his acceptance speech after receiving the award. The veteran actor was first nominated for an Emmy in 1976 for Happy Days for playing Arthur Fonzarelli – aka The Fonz.

3. RuPaul Sends a Message of Acceptance


RuPaul, accepting the award for Outstanding Reality-Competition Series for his series RuPaul’s Drag Race, thanked “all the dreamers out there” and sent an inspiring message to fans: “You can’t love yourself, how the hell you gonna love somebody else?” 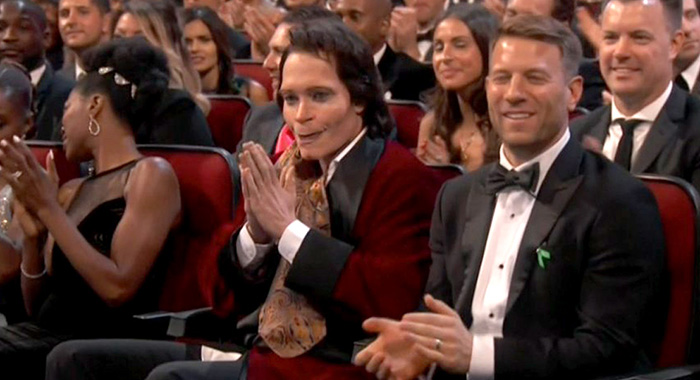 The titular (and creepy) star of the sixth episode of Atlanta’s second season turned up to find out if the show would win any awards in the night’s ceremony, after taking two last weekend in cinematography and sound editing at the Creative Arts Emmys. It did not. Atlanta ended up with three awards overall.


The veteran comedic actress and former Golden Girls star got a standing ovation, then charmed the audience with her self-deprecating humor: “Thank you – I’m just gonna quit while I’m ahead.” Eagerly accepting a kiss on the hand from presenter Alec Baldwin, White joked, “You think I’m gonna miss a chance when I get it?”


In one of the best feel-good moments ever at the Emmys, nominee Glenn Weiss won Outstanding Directing for a Variety Special for his work on the Oscars and celebrated by proposing on stage to his girlfriend: “You wonder why I don’t want to call you my ‘girlfriend’? It’s because I want to call you my ‘wife.’” She – thankfully – said yes!

7. The Americans Finally Gets Its Due – Mostly


Considered by some to be the dark horse of the Outstanding Drama race, FX’s The Americans didn’t take home the big prize on Monday night – that went to HBO’s Game of Thrones — but it didn’t go home empty-handed, either. Showrunners Joel Fields and Joe Weisberg took out Best Writing for a Drama Series for their series finale, “Start,” which has a Tomatometer score of 100%, while star Matthew Rhys took home Outstanding Lead Actor in a Drama Series on his third time nominated in the category. Keri Russell, Rhys’ partner in spycraft on screen and romantic partner in real life, lost out to The Crown star Claire Foy for Outstanding Actress in a Drama Series, but can console herself with her win for Achievement in Drama at this year’s TCAs. Thanking Russell, Rhys revealed, “She said, ‘If you propose to me, I will punch you clean in the mouth.'”