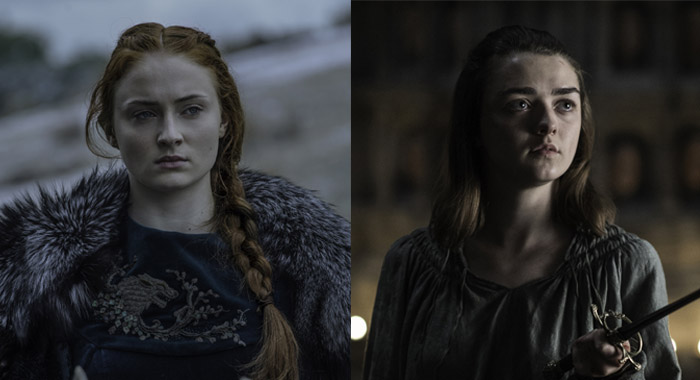 South by Southwest called Game of Thrones their Holy Grail for a panel. The Holy Grail is from a different book, but it’s apropos. David Benioff and D.B. Weiss, creators of the HBO adaptation of George R.R. Martin’s saga, gave their first-ever panel at SXSW. For moderators, they chose none other than the Stark sisters, Sophie Turner and Maisie Williams, who play Sansa and Arya in the hit series.

The Game of Thrones gang had fun ribbing each other on stage. Williams called her bosses “so f—ing old,” a line Weiss revealed they wrote for her. Turner and Williams kept calling them their fun uncles. Weiss kept interjecting that “fun uncle” sounded bad. The creators also joked that Sansa is dead because Sophie didn’t dye her hair back to red.

There was also some real season 7 and 8 info in their talk, along with some fun behind-the-scenes stories of making some of the show’s classic moments. We already know the show returns July 16, because of an online fan event HBO held just days before the panel, but here are 17 things revealed by Williams and Turner’s questions, as well as fan questions that were submitted online.

1. THERE WERE VICIOUS BATTLES OVER SEASON 8’S SIX SCRIPTS

The series’ final season will have six episodes, the showrunners confirmed. Benioff also explained the writing process for Game of Thrones seasons: He and Weiss outline and divide the script up between themselves and Bryan Cogman and Dave Hill.

“We have a 140-page outline for 6 episodes of the final season. Dave Hill will write the premiere, Cogman 802, and we’ll write the other four,” Benioff said.

Weiss said that the divvying got a bit contentious going into the final season.

“Usually it took two minutes to decide,” Weiss said. “This time it took 18 e-mails back and forth, because we realized it was the last time we’d be doing the show.”

Weiss and Benioff confirmed four shooting locations for season 8: Northern Ireland, Spain, Croatia, and Iceland. As fans of the series know, these are all countries where the series has filmed in the past.

Neither Weiss nor Benioff could quote an exact line from the final season, but Benioff suspected he knew who would say it.

“Tyrion,” Benioff said. “Something witty. We can write some crap line and Peter [Dinklage] makes it funny.”

The kicker with this question was that Benioff and Weiss wrote it for the moderators to ask. Then they forgot to think of a clever answer.

4. COULD THERE BE A DRAGON WHITE WALKER?

One fan asked if there could be a White Walker dragon in the zombie army. Benioff considered it.

“Maybe,” Benioff said. “It’d be pretty sad looking. I don’t know if it goes with the mythology.”

Weiss conjured a morbid image: “It’s going to crush that horse because it’s so big.” 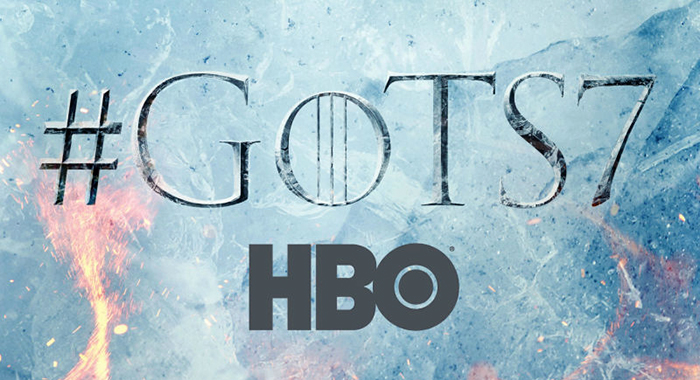 5. THEY SAW AN OPPORTUNITY FOR WOMEN IN MARTIN’S BOOK

“We realized it’s an awful world this story takes place in, but there were more compelling female characters in George’s books who had agency, who were out there, they weren’t secondary to anybody,” Weiss said. “They had their own storylines in this world. It seemed like a very actress-centric show from the source material.”

6.GAME OF THRONES MADE SOPHIE TURNER A WOMEN’S ACTIVIST

HBO drew objections in season 5 for the show’s depiction of Ramsay (Iwan Rheon) and Sansa’s wedding night, in which Ramsay rapes his young bride. The social discussion about portraying rape as a narrative device continues, but one positive impact it’s had is bringing Turner into a primary role.

“I’m quite proud of what that brought about,” Turner said. “It led to a discussion about the taboo of rape and turned me into an activist for that. I’m proud of having done that and been able to portray it on screen.”

On a lighter note, Weiss and Benioff like to mess with their actors. Usually the cast falls for it, like Kit Harington did when they sent him a script where Jon Snow’s face melts off.

“He fights with a white and burns his hand,” Benioff said. “The page described exactly what his mangled face was going to look like forever [on the show].”

Weiss backed him up saying HBO wanted to rough up his image.

“We had a whole story about how HBO felt he was too Disney, too Harry Potter, too clean,” Weiss said. “He bought it until we started laughing.”

They got photographic evidence on John Bradley.

“He was going to have a new costume,” Weiss said. “We said to the costumers, ‘Pull the most ridiculous Henry VIII crap you can find off the rack. Pinkish codpiece. When he goes into the costume fitting take the pictures like you do every year.’ He was such a good sport, but his face in the costume-fitting pictures is my favorite image from the show. John’s face, long-suffering, trying to smile when he’s got a codpiece the size of a loaf of bread.”

8. ONE ACTOR GOT BACK AT THEM

Nicolaj Coster-Waldau is not an easy mark. He had Weiss and Benioff in a panic between seasons, pretending he had shaved his head.

“The actors are supposed to look more or less the same between seasons,” Benioff said. “He was getting annoyed because he wanted to get a haircut. We haven’t approved anything. He sent us a picture, he’d shaved his head. I thought, ugh, now we’re going to have to get a prince charming wig.”

It got pretty serious before Coster-Waldau revealed it was a five-year-old photo.

The crew of the episode where Ned Stark (Sean Bean) gets beheaded had an idea to get a realistic reaction out of Isaac Hempstead-Wright, who plays Bran Stark in the series. They thought they’d fake an accident on set, but keep the cameras rolling for his reaction. None of that footage had him looking towards Ned though.

“We didn’t use any of it because Isaac kept looking to his mom,” Weiss said.

Locke (Noah Taylor) was supposed to die in season 3. Weiss explained how it was going to go down.

“In the bear pit scene, Nicolaj was going to throw Noah’s character into the bear pit, and we were going to have him mauled by the bear,” Weiss said.

Now here’s why he got a reprieve.

“We decided Noah should stay on,” Weiss continued. “He was too much fun to waste so we kept him alive. It hasn’t happened that often.”

11. THESE GAME OF THRONES SETS COLLAPSED

Benioff and Weiss recounted all of the sets that collapsed over the years:

The stone arch set in Malta blew into the sea in a hurricane.

A rock slide fell on Castle Black and crushed it.

Even the green screen wasn’t safe. A 300-foot screen in Spain blew over.

When Momoa returned for one last scene as Khal Drogo, he went out with the crew. Benioff played the slap game with him over drinks and ended up in the ER!

“Seemed like a really good idea at the time,” Benioff said. “My hand’s swollen like a catcher’s mitt. My wife was just so disgusted with me. She took me to the emergency room.”

Benioff got an X-ray and the doctor presented his official diagnosis: “The doctor said, ‘Your friend squished your hand.’”

13. THE EASIEST CHARACTER THEY EVER CAST

Weiss and Benioff admit that most casting is hard. They wanted Dinklage and Bean right away, but everyone else has been a process of weeding through auditions, except for one.

“The first video I clicked on was Mark Addy’s Baratheon video,” Weiss said. “I clicked on the one in the middle of the page and his first take of his first audition tape was perfect. He completely nailed it. That was the only time he ever nailed it. Mark was easiest.”

14. WHY THERE’S A SHAVING SCENE

Some viewers thought it was strange that Game of Thrones took the time in the pilot to have a scene where Jon Snow, Theon Greyjoy (Alfie Allen), and Robb Stark (Richard Madden) have a shave. Benioff revealed the reason it was included.

“The only reason that scene is in there is because there was no continuity between scenes in the pilot,” Benioff said. “The beards were all different. If you look closely, you can tell they’re all flexing because they’re shirtless. They all want to flex their abs.”

15. WHY THEY DISCOURAGE ROCK STARS FROM CAMEOS

A lot of celebrities want to be on Game of Thrones because it’s legit. What they don’t know is how long even a simple scene takes. Weiss tries to talk them out of it.

“A lot of people say they’d like to do it and we tell them, ‘This is so boring. You’re going to be sitting around for three days for 12 hours,’” Weiss said. “Sigur Ros came on. He goes out, does his hero bit, his action, his closeup. Then he’s like, ‘Can I go home now?’ Oh no, because you’re in 1700 shots for the next three days. He was a super good sport about it. He did it all.”

“We knew Maisie was a big fan of Ed Sheeran,” Benioff said. “This year we finally did it.”

16. THE KIDS GOT THEIR OWN WRAP PARTY SEASON 1

After the rigor of shooting a season of Game of Thrones everybody deserves a party. Even the cast members who are under 21! Since they couldn’t drink, the producers threw them their own wrap party.

“At the McDonald’s in Belfast, we had a special kiddie party,” Benioff said.

Turner clarified that it wasn’t being on the edgy Game of Thrones that made her swear. It’s her duty as a Brit.