The Whisperers' secrets, a civil war, losing Michonne, and 10 more things to know about the AMC zombie drama's new season.

TAGGED AS: AMC, The Walking Dead

AMC’s full trailer for season 10 of The Walking Dead sparked many a head-scratcher: What’s Michonne doing kissing King Ezekiel?! And will that factor into the when, why, and how the leader of Alexandria, played by Danai Gurira, will be exiting the series?

Those are just two of the major questions we have about the upcoming season. While we won’t get any answers until Oct. 6, we’ve rounded up 13 things we know about the new season ahead of its premiere.

1. The Whisperers are as threatening as ever.

AMC’s official description of season 10 reveals that Michonne, Daryl (Norman Reedus), Carol (Melissa McBride), and the rest of the survivors are going to continue to be tormented by the Whisperers, who killed several members of the group — including Tara, Enid, and Henry — and stuck their heads on spikes to mark the line the Whisperers do not want them to cross.

Anger about those losses and fear about the very real threat the Whisperers still pose is going to create an environment so tense that friends and allies may start turning on each other. Just take a look at the network’s official description for the season: “The Whisperers are a threat unlike any they have ever faced. Backed by a massive horde of the dead, it is seemingly a fight they cannot win. The question of what to do and the fear it breeds will infect the communities and give rise to paranoia, propaganda, secret agendas, and infighting that will test them as individuals and as a society.”

Executive producer Greg Nicotero, who directs his seventh consecutive TWD season premiere in “Lines We Cross,” hinted during the Talking Dead season preview special that the show is “really getting into fears of ‘who can you trust [of] the people who are surrounding you?’”

2. A few months have passed. 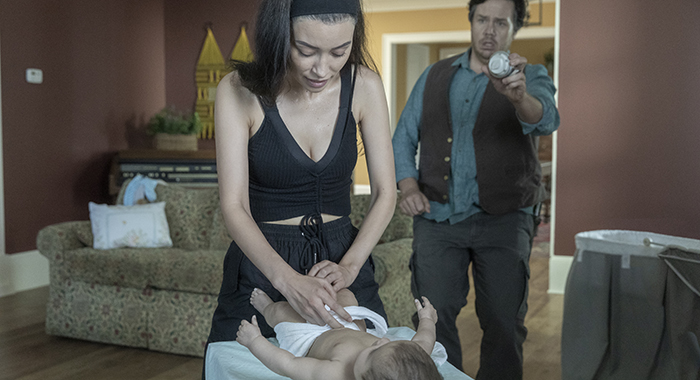 The action picks up a few months after the season 9 finale, and Rosita (Christian Serratos) has given birth to her daughter, whom she named Coco. And, to ensure there’s still a soapy drama in the apocalypse, the Love Quadrangle continues: Siddiq (Avi Nash) is Coco’s dad, Rosita remains in a relationship with Gabriel (Seth Gilliam), and lovelorn Eugene (Josh McDermitt) is changing diapers and performing other daddy duties.

Coco is not the only new face we’ll see in season 10. American Beauty and Ghost World star Thora Birch will play Gamma, a Whisperer who is the third in charge of the group of walker skin-wearers, behind Alpha and Beta. Gamma is a character who doesn’t exist in Robert Kirkman’s now-defunct comic book, but we know she is fiercely loyal to Alpha. In a teaser clip for the new season, we get a glimpse of Gamma coming face to skin-draped face with Daryl and Michonne.

Meanwhile, The Leftovers alum Kevin Carroll pops in as Virgil, a man who crosses paths with the survivors as he is on a desperate journey to reunite with his family.

4. We’ll learn more about the Whisperers’ back story.

More on the Whisperers: On the Talking Dead preview special, TWD showrunner Angela Kang confirmed there will be a backstory episode focused on Alpha (Samantha Morton) and Beta (Ryan Hurst), revealing the origins of their philosophies and their relationship in much more detail than was ever disclosed in the comic book. Morton also suggested we will witness more of Alpha’s humanity.

5. Negan will be set free (occasionally). 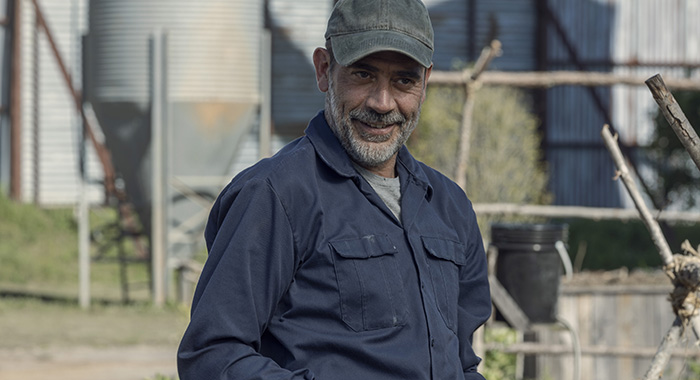 The series’ previous big baddie, Negan, has earned some freedom in Alexandria after he saved Judith in the winter storm last season. Though he’s still locked in his jail cell at night, “We’re releasing the Negan a bit,” Kang joked. During the day Negan is free to roam around the community and interact with the others. But can the cunning former leader of the Sanctuary really be trusted? Not everyone thinks so, and he will be a polarizing subject among the citizenry.

“He’s going to surprise you in ways you’re not going to be ready for as an audience, whether that be good things or downright awful things,” Jeffrey Dean Morgan said on Talking Dead. 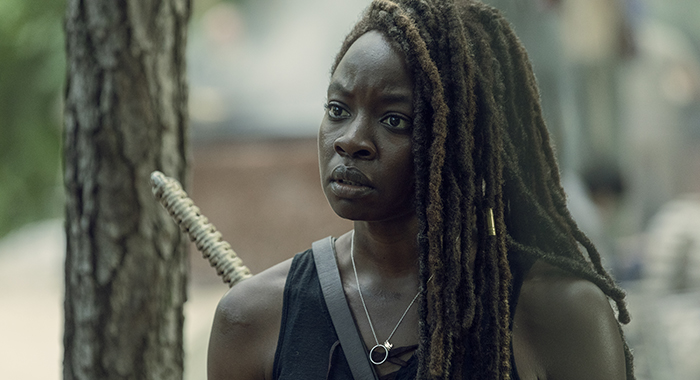 Kang promises a “pretty cool journey” for Michonne in season 10, but little is known about exactly when and how Michonne’s storyline will end. Gurira said much of her remaining time on the series will revolve around Michonne’s relationship with Judith, and making sure her adopted daughter is prepared to continue kicking ass in the apocalypse. The future of Judith and R.J., Michonne’s son with Rick, raises another of the season’s biggest questions: Who will raise the children when Michonne is gone? After the devastating loss of daughter Sophia and adopted son Henry, would obvious choice Carol be willing to step up again?

7. Carol and Daryl could finally get together… 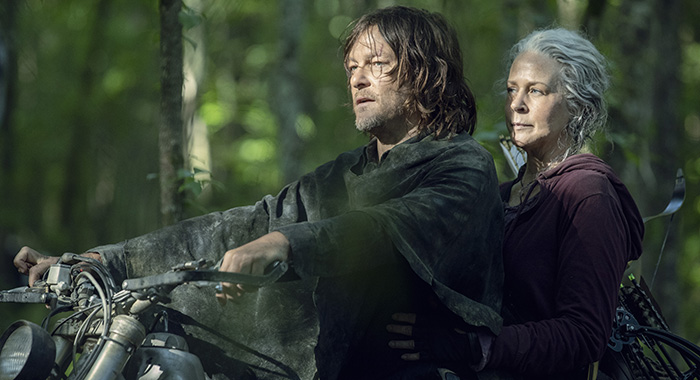 Now that Carol and Ezekiel (Khary Payton) are kaput and Carol has moved back to Alexandria, Carol and Daryl shippers are hoping anew that the two will become a couple. Kang said the BFFs will spend a lot of time together in the new season, but did not confirm that “Caryl” would become a TWD supercouple. 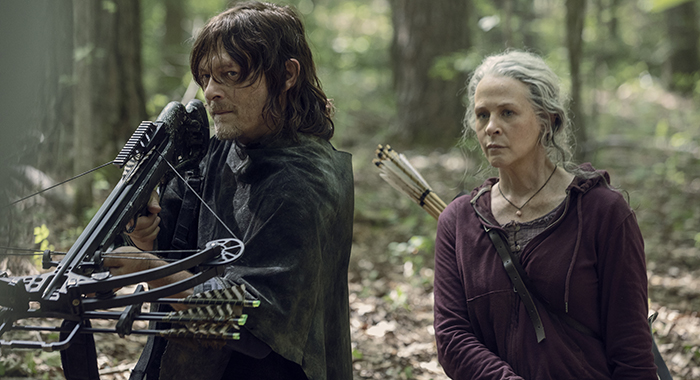 Then again, both have other things on their minds. Daryl continues to step up his role as a leader, and Carol is determined to avenge Henry’s death. There will be a meeting between Carol and Alpha in a scene that Kang called “epic.” And if we’re looking for a new nickname for the Whisperers, McBride provided a great one during the Talking Dead special when she referred to Alpha’s people as “skinfreaks.” 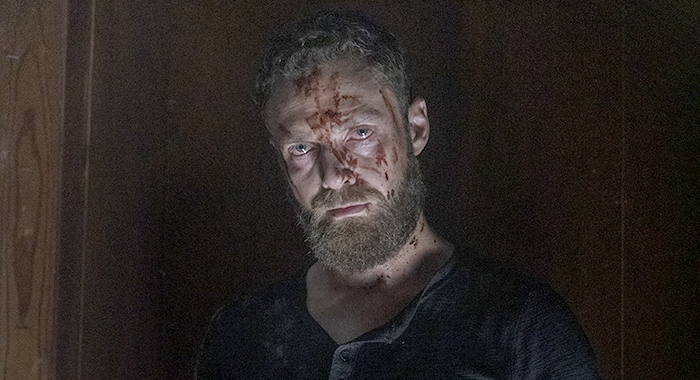 Returning to Nicotero’s ominous warning about who to trust: TWD cast members were asked to describe the new season in three words on Talking Dead. Ross Marquand said of his character Aaron, “No more Mr.-Nice-Guy.”  He cheated a little, counting that last bit as one word, but it suggests that Aaron, who lost an arm last season and is committed to protecting his adopted daughter Gracie, might be one of the characters who’s in conflict with people who were once his allies. It could also mean the show is going to follow the comic book and make Aaron a key figure in the Alexandrians’ efforts to thwart the Whisperers.

By the way, Nicotero’s own three-word preview of season 10: “Watch your back.”

10. Michael Cudlitz is back, and Abraham could be too.

Michael Cudlitz, whose Abraham Ford was murdered by Negan in the season 6 finale, once again returns to the series as a director. Cudlitz, who directed the season 9 episode “Stradivarius,” helmed two episodes for season 10.

Earlier this year on the daytime talk show Strahan and Sara, the actor talked about the upcoming Walking Dead movies and hinted that Abraham could make a return appearance on screen. The movies, Cudlitz said, “are gonna move in time, go back in time, go forward in time, and I believe pair up characters that weren’t necessarily paired up in the graphic novels.” And that’s a “strong, subtle yes. Very, very possible,” he added, that Abraham will be among those newly paired up characters.

11. Maggie could return as well. 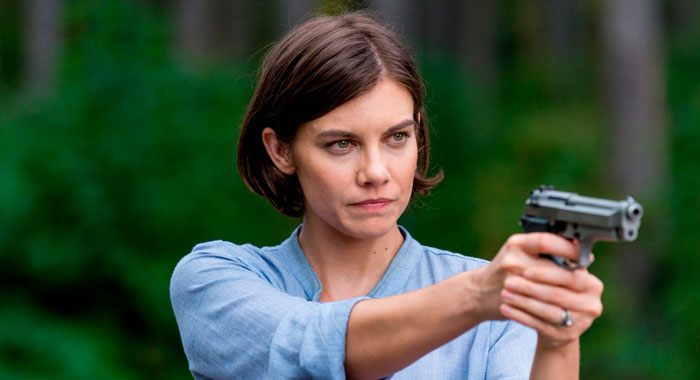 As Gurira makes her exit as Michonne, a role she has played since season 3, Kang confirmed the series is trying to bring Lauren Cohan back as Maggie Rhee. Maggie was last seen in season 9’s “What Comes After,” which was also the episode in which Andrew Lincoln made his final appearance (at least for now) as Rick Grimes. Maggie left her post as the leader of the Hilltop community to go help Georgie (Jayne Atkinson) set up her own community.

12. The Commonwealth could make their screen debut.

Speaking of new communities, the voice heard on Ezekiel’s radio at the end of the season 9 finale might have been the voice of a member of a new settlement … or maybe even Georgie’s group, which many fans believe will turn out to be The Commonwealth, a community that is a major part of the Walking Dead comic books. 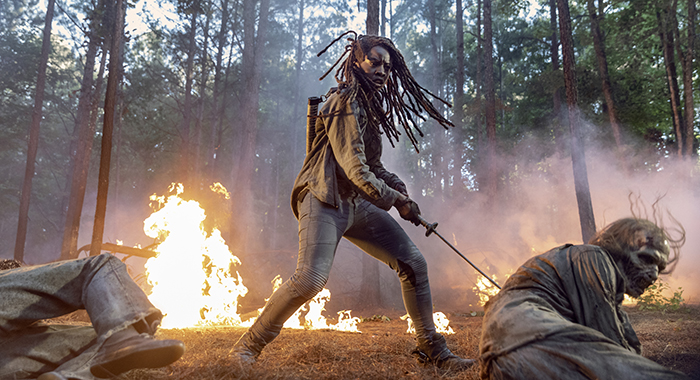 More of the three-word season 10 descriptions from TWD cast members:

Melissa McBride: “So much happens.” 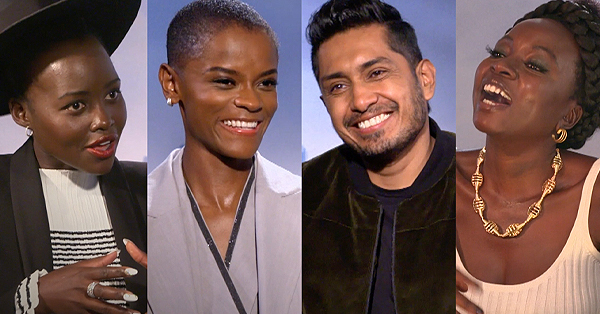