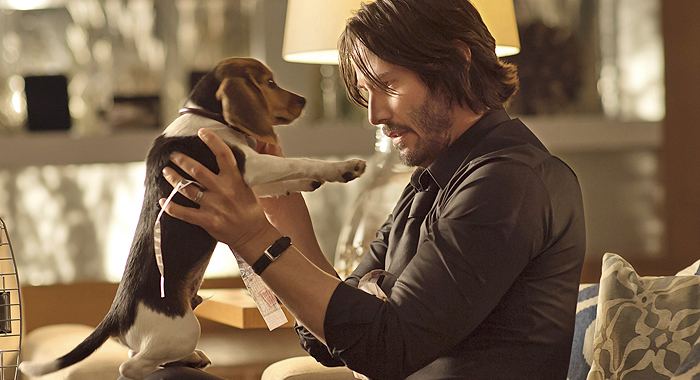 As a filmmaker, you can destroy entire cities with relative impunity and gleefully obliterate whole civilizations with malicious delight without losing an audience’s sympathy. But movies must tread lightly when animals are involved, because there are few things more likely to enrage audiences than the unnecessary death of an animal, particularly a dog. Dogs are borderline sacred in American society, and our treatment of onscreen mutts reflects that.

Thankfully, the 2014 instant cult classic John Wick, directed by former stuntmen Chad Stahelski and David Leitch, has the most necessary and meaningful death of a cinematic canine since Old Yeller, and one nearly as mourned. The dog is the key to John Wick’s magic. Without it, the movie is merely an extraordinarily well-made, skillfully directed and performed action neo-noir starring Keanu Reeves. That’s not a bad place to start, but the dog’s death elevates John Wick to the level of lurid pop tragedy. It transforms a movie for action-film buffs into a movie for anyone likely to be deeply affected by the death of an adorable dog. That is to say, everyone.

I usually find the revenge genre morally abhorrent and emotionally empty, but when vengeance is exacted on behalf of a four-legged charmer instead of a person, it changes everything. In that case, the very universe itself howls for justice, and in John Wick, the title character is the instrument of its fury.

The film opens with the death (by natural causes) of John Wick’s wife (Bridget Moynahan), a woman good and decent enough to inspire her adoring husband to abandon his life of violence and criminality, even though he is to killing people what Meryl Streep is to acting: the gold standard by which all others are judged. A lesser film would have dragged out the wife’s death, but John Wick deals with her as quickly, smoothly, and efficiently as it does everything else.

Before her light is permanently extinguished, though, she arranges to have a puppy named Daisy shipped to her husband’s home to help him deal with his impending grief. John doesn’t get to spend a whole lot of time with the dog, but he doesn’t need to. Daisy immediately makes an indelible impression and worms her way into the hearts and minds of everyone in the audience. Seldom has a badass action movie been so defined by the adorableness of one of its principals. With the exception of the Death Wish series, of course.

John Wick himself is a familiar action-movie archetype: a man of violence who has figured out a way to leave his past behind and enjoy the simple pleasures of an honest, law-abiding existence. Then one day, Iosef Tarasov (Alfie Allen), the degenerate son of Russian mob kingpin Viggo Tarasov (Michael Nyqvist), attempts to buy John’s 1969 Ford Mustang Mach 1 from him at a gas station. Wick politely declines the offer, but Iosef is used to having his way, so he and his men follow John home, where they murder his dog and steal his car. This makes John Wick angry. And you wouldn’t like John Wick when he’s angry. Because first he gets angry, and then he starts murdering people. And once he starts, he doesn’t stop until his thirst for vengeance has been sated.

Wick now has something to live for, and more importantly, something to kill for. From that point on, Viggo and John are on a collision course only one of them will survive, if anyone survives at all. In one of the film’s few bits of exposition, Viggo explains that John’s nickname was “The Boogeyman,” but even that undersells his badassery, because, as Viggo clarifies, John Wick is not the boogeyman so much as he’s the one you send to kill the boogeyman. He’s no mere killer for hire. He’s more like a contemporary folk hero.

In Viggo, John Wick boasts a villain worthy of its anti-hero. Nyqvist plays the mob boss as an inveterate philosopher who regards his life and death with a wry sense of world-weary resignation. His respect for Wick borders on awe, and he seems to know, deep down, that it is his existential destiny to be killed by him. He seems resigned to his fate.

But something deeper also seems to be at work. There’s a sense that Viggo wishes John Wick were his son, and he’s come to terms with his death — and the death of his own son — as an appropriate price to pay to the universe for the unforgivable, unpardonable crime of killing Wick’s dog and stealing his car. To put it in Network terms, when snot-nosed Iosef and his boys killed Wick’s dog, they meddled with the primal forces of nature, and Wick quite simply is not having it.

The film allows John Wick to remain a mystery throughout and surrounds him with characters who are every bit as enigmatic and tantalizingly unknowable as him. We learn, for example, almost nothing about the underworld figures played by the likes of heavyweights Willem Dafoe and Ian McShane, but the way they treat each other says more about them and the dark, ominous, honor-bound world they inhabit than reams of dialogue ever could. Because John Wick leaves so much unsaid, we don’t have any choice but to fill in the blanks.

These weary survivors flesh out the film’s vision of a criminal world that functions as an alternate universe that exists within our own world, complete with an elaborate code of ethics that, like everything else in the film, is never explicitly spelled out. This shadow world has gods and demons and legends of their own, and John Wick qualifies as all three. He’s a righteous angel of vengeance.

The genius of John Wick — and I do not use that word lightly — lies in its tough-guy minimalism, in the way it strips the revenge melodrama down to its raw, potent core. That minimalism extends to the dialogue. The more Keanu Reeves says here, the less badass he seems. Thankfully he says almost nothing, so when he does speak it’s more forceful. Likewise, we don’t need to hear about what a force of nature John Wick is because it’s apparent in every punch, every kick, and every bad guy murdered; the film is admirably committed to showing rather than telling.

Just about the only time John Wick says more than is absolutely necessary is when he’s captured by Viggo and explains the urgency and necessity of his particular path. He describes what Daisy meant to him, how she gave him his first taste of hope in ages, only to have that hope extinguished by a bullet. In John Wick, the criminal world is no place for tourists: either you’re in the life 100 percent or you’re out completely.

John murders a small nation’s worth of glowering Russians over the course of the movie, so he’s not exactly tip-toeing shyly back into his old ways. Yet it isn’t until John is captured by Viggo and roped to a chair, when he tells him and his armed thugs, “People keep asking if I’m back and I haven’t really had an answer. But now, yeah, I’M THINKING I’M BACK!” that his bloody comeback becomes official.

Reeves delivers those instantly iconic lines with ragged breath and visceral, overpowering rage. Like Philip Seymour Hoffman in Mission Impossible 3, he’s a deadly threat to everyone around him even when bound and captured by his enemies.

But there’s a Zen calm to John Wick that comes as much from the actor as the script. Reeves possesses a sweetness and vulnerability that, in the past, has worked against his efforts to come across as tough and imposing. But that likability, as well as his androgynous good looks, makes it easy to buy the title character as a man who will never recover from the personal losses he’s suffered, no matter how many Russians he murders. Just as importantly, at this stage in his career, Reeves has the presence and physical chops to pull off playing this virtuoso of bloodshed, this Mozart of righteous mass murder. Style-wise, John Wick is a marvel of clean, unadorned efficiency. The film’s alternately black-grey and lurid neon color scheme and visceral brutality suggest Only God Forgives if Nicolas Winding-Refn’s film was intent on entertaining audiences rather than repulsing them.

The world of John Wick is full of mystery and empty spaces, so while the film is perfect in its own right, its universe begs to be expanded with sequels and a TV spin-off and graphic novels and comic books and novelizations. Accordingly, the sequel did even better with critics and audiences than the original film, and it seems like there’s an awful lot that can still be done with the character, as evidenced by plans for a John Wick TV series.

But why stop there? If any blood-splattered action movie franchise invited an officially licensed line of dog toys and bulletproof puppy vests, it’s this one. Hell, if Billy Jack got four movies, then John Wick deserves at least eight.

John Wick transformed Keanu Reeves (who had a little bit of success in action via the popular Matrix films) from a wannabe badass to the real thing. John Wick is the hero we need, and a hero for our times, even if we have done little, if anything, to deserve him.