5 Reasons To Give Marvel's Iron Fist Another Chance

Better fights, stronger characters, and more Daughters of the Dragon action all make for an improved series in season 2.

The first season of Marvel’s Iron Fist didn’t go quite right. It earned a 19% on the Tomatometer and is notable for being the least creatively successful of the initial four Marvel television programs on Netflix. Daredevil fared much better with a Certified Fresh 99%, while Jessica Jones and Luke Cage debuted with respective Certified Fresh scores of 93% and 94%.

The series, starring Finn Jones as Danny Rand, a Manhattan-born scion of an industrialist family who learns the secrets of the Immortal Iron Fist while stranded in an inter-dimensional Far East city, had a number of things going against it. Jones was cast late and the production had little money or time to train him (or anyone else) for the fight scenes. And, let’s face it, a show called Iron Fist needs to have great fight scenes. On the emotional front, characters often varied wildly from episode to episode – particularly Danny, who went from Zen master to little boy at lightning speed – while the first season’s story line bore the responsibility of establishing The Hand’s more mystical elements ahead of Marvel’s The Defenders and its own ongoing Iron Fist elements like Danny’s relationship with Colleen Wing (Jessica Henwick) and the travails of the Meachum family.

But over a year later, Iron Fist is back with a second season, new executive producer Raven Metzer at the helm, and a seemingly stronger sense of direction. The critical response so far has been much better – a 38% improvement over the inaugural season. Nonetheless, it is understandable if you may have some misgivings about giving the show a second chance. Maybe the following five aspects of the new season will compel you to try the first handful of episodes.

From its opening moments, in which Danny takes on some armored truck thieves representing one of the gangs hoping to replace The Hand, Iron Fist’s second season makes the fight scenes a priority. Behind the scenes, the production hired stunt coordinator Clayton Barber to revamp the style and tone of the program’s martial arts action. A veteran of productions like HBO’s Fahrenheit 451 and Marvel Studios’ Black Panther, Barber said he was hoping to create a “punk rock kung fu song” with the fights, focusing on tempo and rhythm. The Chinese restaurant fight later in the first season 2 episode underscores this approach.

Barber also worked with the actors so they could do substantially more of their own stunts this time. Jones, for example, began stunt training four months ahead of the production and took an additional five months getting into shape. While stunt doubles were still employed for some shots, Barber said, “the cast was up to the task, and we got a really good result.”

In fact, the series was confident enough in its fight scenes to show five of them during the program’s panel presentation at Comic-Con International: San Diego back in July. While the armored car battle, and portions of the Chinese restaurant brawl and the K’un-Lun fights have appeared in clips and preview material since, a glimpse of fight scene between Colleen, Misty Knight (Simone Missick), and Typhoid Mary (Alice Eve) also revealed just how much had changed on the series, with Misty, in particular, facing some of the most visceral action yet.

Again, a show called Iron Fist needs to have great fight scenes, and the fights revealed so far definitely have some energy to them.

2. A Clearer Direction For Danny 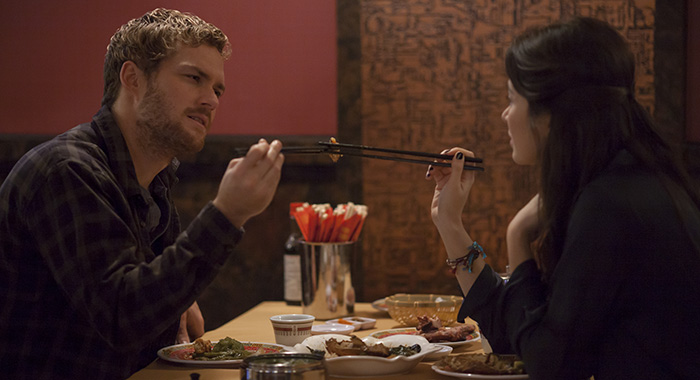 Where the first season saw Danny wavering between his duty as the Iron Fist and his wish to reintegrate into his old life, the second year sees him solider on with a renewed purpose following The Hand’s defeat in The Defenders, honoring the “dying” wish of Matt Murdoch (Charlie Cox) and defending his city. This sees Danny refusing to use his fortune – another issue he wavered on in the first year – and roaming the streets at night to stop a brewing gang war to see which outfit will replace The Hand.

According to Jones, Danny is taking his mission “very seriously” even as he continues to grow as a normal, functioning adult.

“He’s also moved in with his girlfriend, Colleen, so he’s coming of age, and he’s trying to balance all those things,” Jones said. Not that balancing those things is easy, especially as Danny is “enjoying himself — maybe a little bit too much.”

Nonetheless, the clearer presentation of Danny makes for a lead protagonist viewers may find more appealing. 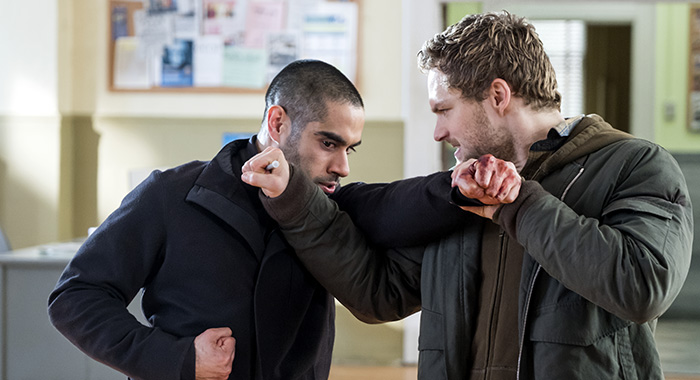 Season 1’s mixture of Harold Meachum (David Wenham) and various Hand operatives like Madame Gao (Wai Ching Ho) and Colleen’s mentor Bakuto (Ramon Rodriguez) – to say nothing of Ward Meachum’s (Tom Pelphry) journey – left the show unfocused in terms of the antagonists. But season 2 offers a much stronger opponent for Danny in the form of his K’un-Lun friend Davos (Sacha Dhawan), known to comic book fans as Steel Serpent. Appalled by Danny’s choices – and his apparent failure to protect K’un-Lun from The Hand – Davos was more than ready to ally with anyone opposed to Danny in the first season’s final moments.

Ultimately, the thing turning Davos from friend to foe, however, is his unwavering belief that he should be the Immortal Iron Fist. It is the key issue in that K’un-Lun fight we’ve seen in preview clips, which will be seen in full in the new season’s second episode, and it leads him toward an ability which could shake Danny’s hold on the Iron Fist.

And if you recall the end of first season, he’s also likely in league with Joy Meachum (Jessica Stroup).

The nature of their bond makes Davos a much stronger antagonist for Danny. In season 1, The Hand was something of a theoretical opponent for Danny based in little more than stories told about them in K’un-Lun. Even Harold Meachum, despite his connection to The Hand and his direct involvement in the plane crash which killed Danny’s parents and left him stranded, never made the fight truly personal. Davos, a person who is essentially Danny’s brother, makes the conflict much more palpable for the title character. It also makes the fight more difficult as Danny would still have empathy for him versus the more black-and-white way he looked at The Hand.

A stronger conflict, like one between brothers, can only aid the series overall. 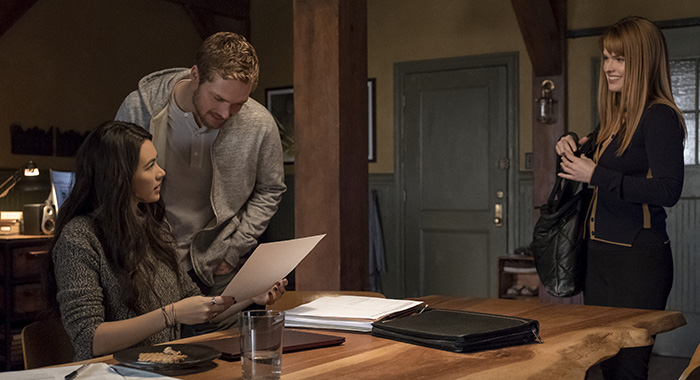 And like Danny and Davos, all the surviving characters appear to have more care and attention given to them. Colleen, for example, faces an internal conflict about staying in the fight following the events of The Defenders.

As Henwick told Rotten Tomatoes back in July, “Colleen’s like a bunch of contradictions. She says she doesn’t want to fight, but as you see she’s still fighting … She doesn’t want to live this life, being a vigilante, but she’s still dating a vigilante, so it’s kind of inevitable that you get pulled into all this drama that’s happening in Chinatown.”

Ward, meanwhile, continues his journey into — well, whatever Ward ends up being. His strange arc in season 1 was one of the highlights — even if he’s a character viewers love to hate — and the start of season 2 see him enjoying a little hedonistic backslide even as he tries to get help for his myriad issues. As for Joy, it seems pretty clear where she’s headed thanks to her new alliances. From the jump, she seems poised for simple revenge, but that motivation becomes less clear as things move forward. And considering her comic book counterpart’s character arc, Joy may end up in a very different place by the end.

One new character joining the series is Typhoid Mary. Played by Alice Eve, the classic Daredevil comic book villain joins Davos’ scheme to undo Danny. Mary’s various personalities may feel differently about this after a few episodes, however. A sufferer of Dissociative Identity Disorder, she invents personalities to protect the vulnerable person Danny first meets in a key scene of the second season’s debut episode. Her other personas, however, are definitely itching for a fight.

With one new key character and a number of returning characters needing no introduction, the opportunity to turn some them (yes, even Ward) into fan favorites is certainly possible.

5. The Daughters of the Dragon Debut — Sort Of

It is no secret that Misty Knight is coming downtown for Iron Fist’s second season, but as Missick told us in July, her story line will not be a full debut of the Colleen/Misty team-up known as the Daughters of the Dragon.

“I don’t think the fans are going to get to see them in the way that they hope, that peak, but I think it is a nice change,” she explained at the time.

Nonetheless, the pair will be featured in at least two fights across the season and though Misty has her own police-related reasons for visiting the neighborhood, she will offer Colleen the same emotional kick-in-the-pants Colleen offered her early in Luke Cage’s second season.

Of course, their time together will still inspire fans to demand a Daughters of the Dragon series all their own. As Luke Cage showrunner Cheo Hodari Coker mentioned to us back in June, people were already asking him for that series based on a short clip from their team-up on Cage.

“I think that they bring out a side to each other that you don’t get to see otherwise,” Henwick said of the duo during Comic-Con. “They have the same sense of humor, and they’re badass — what’s not to love?”

Considering the way fans have embraced the characters, this may be reason enough to watch Iron Fist‘s second season. Or, at the very least, try a handful of episodes. 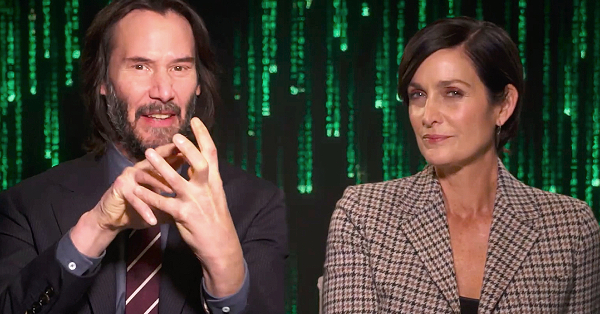