Cheo Hodari Coker recounts some lessons learned from season 1 and pouring “heart and soul” into the new season. 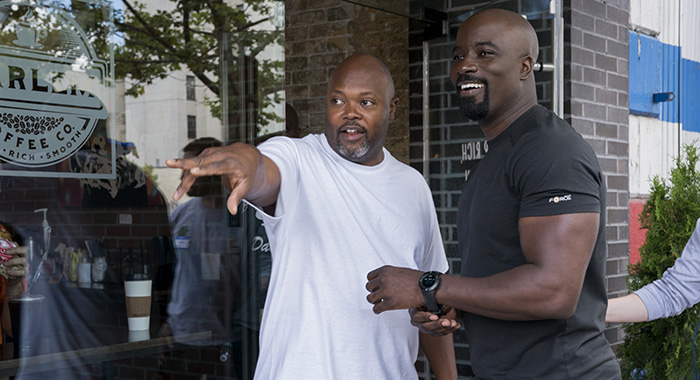 In preparing the second season of Marvel’s Luke Cage, executive producer and showrunner Cheo Hodari Coker said he took one key piece of criticism of the first season to heart: “People really felt very strongly, loving the first seven episodes, and then felt a certain way after [episode 8].”

The main antagonist shifted from Mahershala Ali’s brilliant take on Cornell Stokes, a.k.a. “Cottonmouth,” to Erik LaRay Harvey’s broader Willis Stryker, a man from Luke’s past who adopts a supersuit and the name “Diamondback.” The show itself also seemed to lose some of its focus following Ali’s departure.

While admitting that he had to have a “sense of humor” about the criticism, that issue of pace across the season became one of the things he wanted to tackle in the second season: “How can we make it so that all 13 episodes feel like you need to see them?” became a key question in developing the season-long story. In his estimation, the episodes in second season of Luke Cage “really ratchet up the deeper in you get.”

Set sometime after the events of Marvel’s The Defenders, this season sees Luke accepting his role as the Defender of Harlem, even if its bringing in little money and imperiling the future of Pop’s Barber Shop. Although, Bobby Fish (Ron Cephas Jones) is helping him field calls from Nike and ESPN for possible endorsement deals, an idea which felt like a natural extension of Netflix’s Marvel world to Coker.

“If superheroes really existed, Nike and Adidas and Under Armour would be out there trying to buy their rights no different than Netflix or Amazon are fighting over showrunners,” he said. To Coker, superheroes would eaily fit into the world of sports celebrity. “If you could throw a 400-pound tire, you’re an athlete. We are a culture that deifies our special athletes,” he explained. “You can say it started with the Olympics, if you’re looking at Greco-Roman culture and how athletes were heralded in the same way that mythological characters were, but in this age of narcissism and celebrity, money, power, image, where basically we get to turn the cameras on ourselves constantly, it amounts to one big-ass selfie session.”

Coker said it was interesting to explore superheroics through that prism, but teased he was also interested in “how quickly it can go away.”

“Like, all the sudden, if you get your ass kicked and you’re no longer popular, then OK. Nike wants their shoes back,” he added. 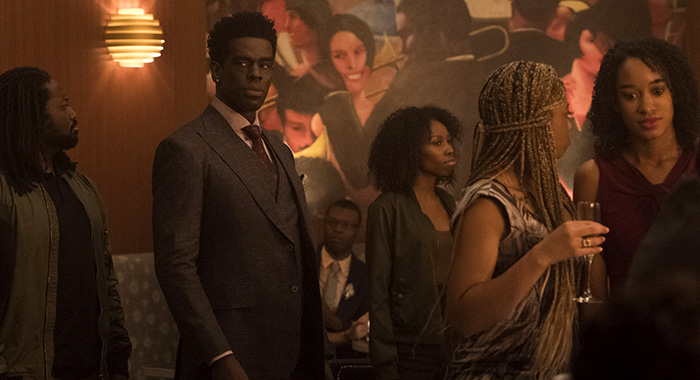 Presenting Luke with a challenge that could end his endorsement prospects is John McIver (Mustafa Shakir) — a.k.a., “Bushmaster” — a former Harlem resident returning to settle a grudge against gun runner Mariah Dillard (Alfre Woodard) and claim Harlem for himself. When Luke takes to social media to declare Harlem is his special protectorate, it becomes only a matter of time before Bushmaster tries to “correct” his thinking. The resulting encounter definitely changes Luke’s profile in the neighborhood.

Coker said the rise-and-fall story quickly evolved once Luke’s release from prison became a plot point in The Defenders.

“It might have been interesting to tell Luke’s coming home story,” Coker said. “But in not telling that story, it gives me room to really get it very quickly to what Luke is like now that everybody knows his secret and now anybody can find him. What it is like being a superhero in the age of Twitter, and Instagram, and having apps that can actually track your whereabouts?”

The storyline touches on issues of fame Luke has faced in the comics, but Coker felt the idea was fresh because of the intimacy the technology seems to give and the close-knit feeling of the community as presented on the series.

“As a creator working in the Marvel Universe, you want to always bring something different and new to the table so that fans have a different experience from just reading the comics,” he said. He added that there still must be respect for the comics, of course, and Netflix’s needs from the show as storylines develop. “It’s really always trying to strike that balance, but always trying to give new moments to it. For me, that’s where I really curate it with black music and black culture.” 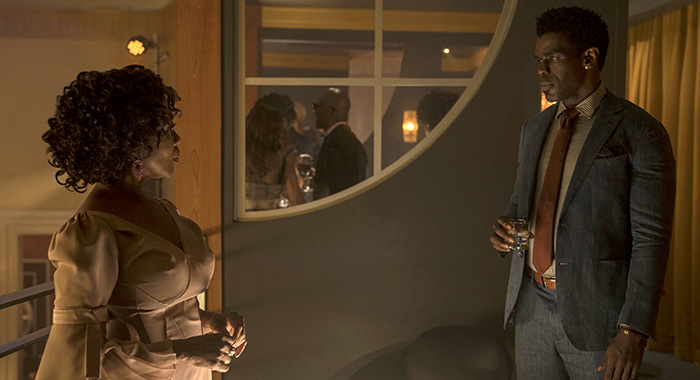 Part of that curation appears on a macro level as the story highlights a major cultural divide between Mariah and Bushmaster. It also appears in musical choices and references within dialogue. “Jay-Z’s 4:44 just came out [when were shooting], and so we have those songs talking about those moments where he almost lost Beyoncé, and he said ‘never go Eric Benét,’” Coker recalled. “And then being able to have Bobby Fish say something like that to Luke [adds a layer of meaning].”

The show also gets a little more playful and humorous in the second year. To Coker, the playfulness reflected the sense that the show could relax now that it was established. “When you’re first trying to establish a character, I think sometimes people – meaning us and the executives on both Marvel and Netflix side – are kind of afraid to lean into humor because we have this whole thing of, we want people to take this seriously, we want to stay grounded and gritty. But then it’s like, you stay too gritty then it’s not fun, you know? I always try to have pop culture references that I think are funny, because I’m relatively sarcastic.” 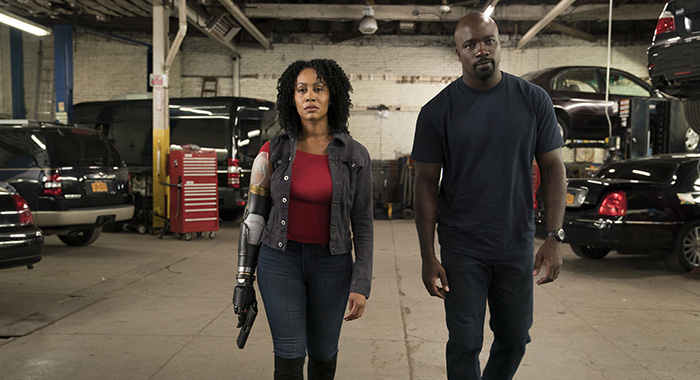 As an example, he highlighted a scene featured in one of the trailers: Misty Knight (Simone Missick) asks Luke why he couldn’t be her sidekick. His response: “It’s my show.” In discussing the moment, Coker was quick to say the characters were not breaking the fourth wall, but “the metaphor that we did with this was just too delicious to resist.”

The show will also tackle some of the current political situation, including the president, but Coker said, “we don’t come at Trump in the typical way.” Identifying himself as “Pro-Bama forever,” he explained, “even when you have an agenda, I believe in laying things out and letting the audience come to the same conclusion that you think you were going towards as opposed to saying this is what it is, you know?

“The thing is that you don’t want to be Fox News or MSNBC. You want to basically tell a story that comprehensively lets people come to their own conclusions,” he continued. Since superheroes appeal to people of most political leanings, Coker said a show like his – which is “clearly, you know, Black Lives Matter, and very clearly deeply entrenched into black politics” – still offers something to people outside the culture or experience. It is an element of the series he called “inclusively black.”

“We’re making entertainment that is uniquely from the black experience and deeply from that experience. We’re not watering it down, but we’re not doing it in such a way that people from outside that culture, or even from outside that political leaning, can’t enjoy or feel affected by the show,” he explained. 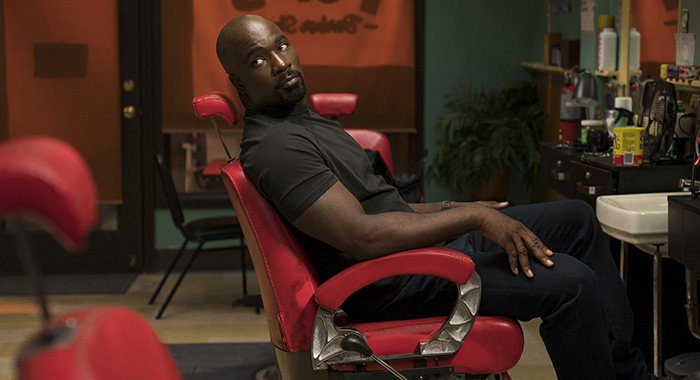 Coker noted musicians like Bob Marley, Stevie Wonder, and Marvin Gaye come at politics in a similar way – head-on with “very liberal leanings,” but “the way that it’s done, people from everywhere love these records because it speaks to the human condition.” Coker said he sequences the show like an album, and relies on music throughout the show to create a similar effect to albums like Stevie Wonder’s Songs in the Key of Life and Bob Marley’s Exodus.

“We’re trying to make a record that’s like What’s Going On,” he said, “where you really can say what you want to say, but you’re saying it in a way that the world can hear what you’re saying.”

He added that there is also a subversive quality, like the music of Marley, because “people from the system and the structure don’t necessarily feel like he’s talking about them when they’re listening to his records.”

Coker is very pleased with the results of the Luke Cage team’s efforts and hopes the audience feels the same: “I hope that the critics and I hope that the fans love the season as much as I personally do … You just have give your heart and soul to it. And that’s really what we did. I left nothing on the field. None of us did. As the writing staff, the actors, the directors, we let it all hang out. All of us collectively, you just say, ‘F— it. Let’s do it.’ And we really tried to make the best possible show that we could make, and I hope the people agree with us.”