Why Snakes on a Plane Fails as a Cult Film

Nathan Rabin looks back at a campy thriller that fell short of glory in its half-baked attempt to give the internet what it asked for. 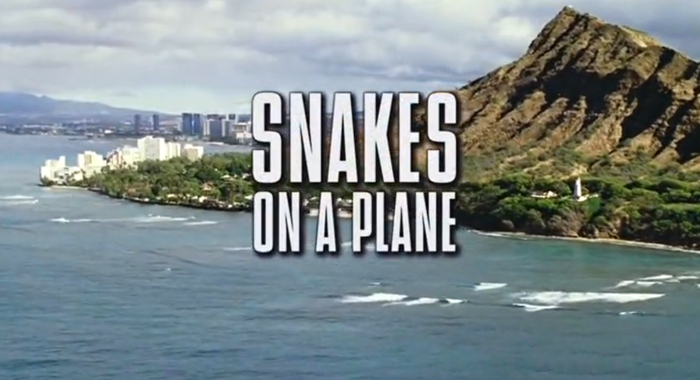 There is no quality the Internet prizes above awesomeness. Truth, beauty, justice; these are all fine and dandy. But for the hardcore denizens of the internet — the snarky, smartass souls who spend their days quipping wise on Twitter, contributing to Facebook groups, and surfing various pop culture websites — such admirable, old-fashioned qualities can’t begin to measure up to the zeitgeist-capturing awesomeness of the space raccoon that wears people clothes in Guardians Of The Galaxy or the Merc with the mouth currently hypnotizing the masses.

The cult of the internet is in many ways a cult of awesomeness, and about a decade ago, its denizens were overjoyed (hell, let’s use the appropriate terminology: they were super mega geeked) to stumble across a film title, star, and premise that promised to result in the single most awesome movie ever made. Note that I did not say the best movie or the funniest or, god forbid, the smartest.

The film that I am talking about is, of course, 2006’s Snakes On A Plane, a silly little trifle elevated to the level of a bona fide pop culture phenomenon before the non-internet world — the one that, to its credit, doesn’t care what insanity Jaden Smith is tweeting because they have more important things to worry about — knocked it back down to size.

Snakes On A Plane’s road to over-hyped notoriety kicked into high gear when, according to popular lore, Samuel L. Jackson agreed to sign onto a movie called Snakes On A Plane, to be directed by Hong Kong veteran Ronny Yu (who was eventually replaced), without needing to look at a screenplay. Why would he need to? If this awesome dude thought the title Snakes On A Plane was awesome enough for him to sign on, sight unseen, who were we to suggest that maybe this movie maybe wouldn’t be transcendently, awesomely bad, but merely sub-par?

It was like the old “Magic Word” on You Bet Your Life, only this time, the internet was promising that if Jackson would simply scream those words at the top of his lungs, then they would give the studio behind this surefire masterpiece all of the money. Not just all of their money, mind you, but all the money in the world. And if Snakes On A Plane did make all the money in the world, it would be considered a distinct commercial success. To that end, the filmmakers re-shot scenes in a desperate attempt to give its instant cult more of what they thought it wanted, and bumped up the rating from a weak and compromised PG-13 to a hard R in the process.

It did not go down the way the internet imagined it would, however, and the movie, which promised to make far more money and reach a vastly larger audience than anyone dreamed possible, ended up being, of all things, a distinct commercial disappointment. Considering the film’s modest budget, it wasn’t quite a flop, but it’s hard to see it as anything but the most compromised kind of success.

The internet loved the idea of Snakes On A Plane, but it was a lot less gung-ho about the reality of it, and non-Internet people who wondered what the fuss was about stayed away. Like the similarly hyped, similarly underwhelming Fanboys, Snakes On A Plane was an enormous cult movie whose cult seemed to have mysteriously disappeared as soon as the film was released and proven eminently unworthy of their frothing, misplaced passion and belief.

Jackson’s enthusiasm helped make Snakes On A Plane a thing, but he fails to make his protagonist, FBI agent Neville Flynn, anything more than than the shouty guy with a gun he plays in most of his more forgettable films. In Snakes On A Plane, Flynn offers to protect simian-featured extreme sports enthusiast Sean Jones (Nathan Phillips) if he’ll travel from his Hawaii home to Los Angeles to testify against martial arts-adept bad guy Eddie Kim (Byron Lawson) after the earnest, charisma-impaired young man witnesses the crime boss killing an enemy.

The veteran FBI agent plans to take up all of first class on the flight transporting his precious cargo, but his plans go extravagantly awry when Kim decides to smuggle pheromone-crazed snakes onto the plane in hopes that they’ll bring it down. Kim only wants to get rid of a single witness, but he has no problem killing a whole bunch of innocent bystanders in the process. He is not a very nice man.

It’s an action-comedy, but more than anything, it’s a disaster movie about a coterie of broadly drawn types who are faced with a crisis beyond most folk’s vivid imaginations and expected to figure out a way to band together for the sake of survival. In the grand tradition of disaster movies, these supporting characters don’t even need to open their mouths for us to know everything about them.

All it takes is one look at Mercedes (Rachel Blanchard), a lanky beauty with a chihuahua in her purse, to know that she’s a snobby child of privilege who enjoys the finer things in life, just as a single gander at “Three Gs” (Flex Alexander), a well-dressed black man surrounded by chunky flunkies, tells us he’s an arrogant celebrity who’s full of himself and more than a little obnoxious.

Snakes On A Plane doesn’t deliberately choose to be bad so much as it luxuriates in the freedom the world has given it to not be good. Even the talented actors on display here sink to the level of the material, like Julianna Margulies, who makes zero impression as Claire Miller, a flight attendant on her last trip before leaving the stewardess trade for good. Thank God the filmmakers establish that Claire is experiencing a personal and professional milestone, or the only notable thing that would have happened on her final flight would be all those snakes popping out of nowhere and killing people.

Snakes are the film’s reason for existing, but like everything in Snakes On A Plane, they’re more fun in theory than in practice. The idea is a kitschy, goofball delight, but as villains, snakes are pretty limited and one-dimensional; they basically have one move, which is to jump out and kill people. The CGI-intensive special effects here are unconvincing enough to kill any suspense but not unconvincing enough to be funny or fun.

Once onboard, Snakes On A Plane wastes little time pandering to the drunken whims of the audience. A couple goes to the bathroom to have sex and smoke weed and are murdered by reptiles for their troubles. Shortly afterwards, a man trying to urinate is rudely interrupted by a snake that attaches itself to his penis and refuses to let go. In shock and horror the unfortunate victim yells, “F—ing d—, get off my d—!” to the cursed reptile.

Now, a man moaning “F—ing d—, get off my d—!” while bleeding to death from a reptile feasting on his penis may engender guilty chuckles, but Snakes On A Plane is frustratingly light on guilty chuckles, which is the whole point of instant camp like this.

I was thoroughly underwhelmed by the film when I saw it by myself at a 10 o’clock screening the Friday it came out. I felt a bit like an enemy of fun, being so thoroughly non-entertained by such a frenzied juggernaut of trash-culture fantasy fulfillment. I suspect part of my response was attributable to seeing it in less than ideal circumstances (stone cold sober, in the morning, and with a critical eye), but I was also probably responding, on some level, to the hype.

I’ve made bad movie appreciation the cornerstone of my life and career, so re-contextualizing Hollywood product in fun and subversive ways is something I’ve devoted a lot of thought and energy to. I was irritated that the studio tried to create a pre-fabricated “so bad it’s good” cult classic, rather than letting a cult come to the movie organically. I was both relieved and a little chagrined that Snakes On A Plane left me just as cold a full decade later in a much different context.

The ultimate problem with Snakes On A Plane is that it has no real take on the material, no point of view. Bad movies generally become cult classics one of two ways. They’re either the product of gloriously misplaced passion, personality, and sincerity, like The Room, Fateful Findings, or Glen & Glenda, or they realize their fundamentally tawdry and sleazy nature and have fun with their shortcomings.

Snakes On A Plane knows that it’s stupid and silly, but that’s the extent of its self-awareness; it gives audiences what it thinks they want to such a tedious degree that it ends up feeling less like the kind of cult favorite that inspires fan fiction than actual fan-fiction itself.

It’s as if the internet were “playing” Snakes On A Plane like a kid playing a video game. The masses were making the movie’s characters do and say what they wanted, but all they were really doing was hitting the “Be More Awesome!” button until it stopped working. Movies made by committee seldom work when that committee consists of unseen armies of executives, script doctors, editors, and focus group respondents all working to create something that reflects less the strong, uncompromised voice of a single auteur than the half-assed contributions of a far-flung aggregation of people doing the best they can. But movies made by committee work just as poorly when the “committee” in question is the internet.

In a sense, it all comes down to the scene where Jackson fulfills his cornball destiny and yells that instantly famous catchphrase about the mother-bleeping snakes on the mother-bleeping plane. It’s the film’s ultimate moment of truth: an actor who embodies awesomeness is yelling the awesome line the Internet has lovingly forced on him in an awesomely titled movie with an insanely awesome premise, and the result is, alas, decidedly less than awesome. The whole phenomenon is leading up to this moment, and it rings utterly hollow. It turns out that “awesomeness” is a pretty thin conceit, shallow, juvenile, and empty. Huge portions of the internet may be built upon a middle school concept of “awesomeness,” but it’s not even enough to sustain a single silly b-movie.

Snakes On A Plane was supposed to illustrate the strength of the internet. Its success was supposed to be a testament to the web’s ability to whip up a hurricane of hype and press and transform a glorified b-movie into a fluke blockbuster. Instead, its failure illustrated the limitations of the internet’s awesomeness brigade, as well as “awesomeness” as both a conceit and a state of mind.