It's gonna be a hot time on the cold town tonight, as Nathan Rabin reexamines Tim Burton's second stab at the Caped Crusader. 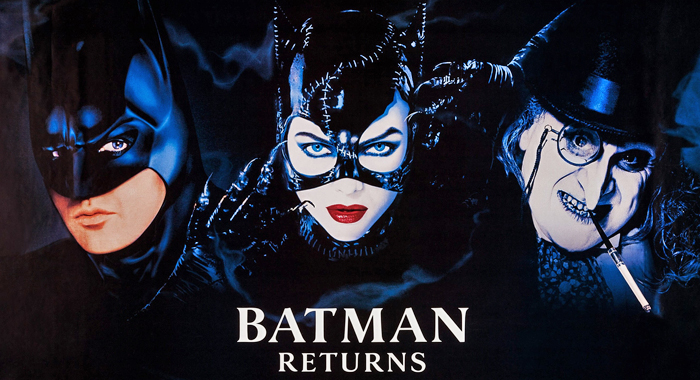 This may come as a shock to younger readers, but there was a time when the promise of a new Tim Burton movie was greeted, by critics and audiences alike, with excitement and feverish anticipation instead of eye-rolling and dread. I should know. As a child, Burton was one of my favorite filmmakers, if not my favorite.

Then again, I was at a perfect age both to fall rapturously in love with Burton’s aesthetic and then for that passion to turn ice-cold. When I was nine years old, Burton’s 1985 debut, Pee-Wee’s Big Adventure, was my all-time favorite movie. It was one of those magical films that single-handedly engender a lifelong passion for the arts, and 31 years later, Pee-Wee’s Big Adventure is still in my top 10. Just three years later, Beetlejuice rocked my 12-year-old self’s world to an equivalent degree. I was so geeked about the prospect of Tim Burton making a Batman movie (starring the guy from Beetlejuice, no less!) that I bought the novelization and saw the movie on opening day.

If anything, Batman Returns, which finds Gotham covered in snow as Christmastime approaches, is too much of a Tim Burton movie. Burton took a big-money studio assignment and transformed it into something so weird, so dark, and so personal that it belongs more in a column like this one about weird cult movies than it does in one about big blockbusters, despite the film being one of 1992’s top grossers.

I’m still amazed that Burton managed to get Siouxsie and the Banshees to record the theme song instead of, oh, I dunno, literally anybody else. I’m sure Warner Brothers would have preferred Paula Abdul or U2 or MC Hammer, but Burton stuck to his guns. I like to imagine that Burton fought to replace Pat Hingle with Morrissey as his Commissioner Gordon, but Batman Returns is still about as Goth as a superhero movie can be, even without the surly frontman of the Smiths in a major supporting role.

Yes, Batman Returns made a lot of money because a sequel to Batman was destined to gross a fortune no matter how bad or good it was. But the film did not make as much money as anticipated because there was a culture-wide sense that Burton had gone too far with what was ultimately a gritty, revisionist take on the Bruce Wayne mythology, but also, fundamentally, an action movie for boys who would then go and buy all of the related toys.

Batman was certainly dark for a tentpole blockbuster, particularly when compared to something like Richard Donner’s achingly wholesome, red, white, and blue Superman, but it was dark within an acceptable range. Batman Returns, on the other hand, was sexy and dark and disturbing in a way that both concerned and titillated adults.

The movie begins with two parents unsuccessfully attempting to murder their baby. The baby in question is Oswald Cobblepot, the scion of an aristocratic family who is born so hideously disfigured and viscerally disturbing to look at that his father and mother (Paul Reubens and Diane Salinger) send the unfortunate tot to meet a cold, watery death in the Gotham river after he attacks their cat.

Oswald does not die, however, and grows up to be the Penguin (Danny Devito), a crime kingpin whose disconcertingly round body makes him look like a rancid, monochrome human M&M with dirty, scraggly hair and the most atrocious penis-nose this side of Dan Ackroyd’s judge in Nothing But Trouble.

DeVito plays the Penguin as a feral, monstrous creature whose sexuality is overbearing and off-putting. He represents a sexual threat to any woman unfortunate enough to be within groping distance of him. He’s a creature of the shadows, of the sewer, of darkness and rejection and pain and ugliness.

But if the Penguin, with his phallic proboscis and grabby hands, was too disturbing for a film for whom a fast-food tie-in was inevitable, then Michelle Pfeiffer as Selina Kyle/Catwoman was way too sexual for the pre-pubescent set, although I imagine that one look at Pfeiffer in her skin-tight leather fetish wear was enough to kick-start adolescence in plenty of boys and girls.

The word “badass” is thrown around so gratuitously these days that it has lost what little meaning it once possessed, but Pfeiffer, in perhaps her defining role, is legitimately badass. She’s a feminist anti-hero who begins the movie as the meekest of milquetoasts. Pfeiffer spends much of the film’s first act talking to herself, because within the world she inhabits, she’s not just powerless, but invisible. She captures the existential despair of someone who is so used to being ignored that she all but disappears even before her crazy-haired, malevolent billionaire boss Max Schreck (Christopher Walken) hurls her out of a window in a fit of rage and she is nursed back to life by helpful felines. Out of this small, sour sadness, the ferocious force of nature known as Catwoman is born.

Catwoman and the Penguin become super-villains by virtue of trauma and rejection. They were the target of unfathomable cruelty by people who were supposed to help and protect them, so their rage towards humanity is both understandable and justified. Max Schreck, on the other hand, comes about his super-villainy purely through greed and cynical calculation. In that sense, capitalism is really the movie’s fourth super-villain. Heaven knows three villains just aren’t enough.

It’s money after all, that brings together the Penguin, the violently rejected progeny of a prominent family, and Max Schreck, a man of extraordinary wealth, power, and privilege. Schreck decides he’d have an easier time achieving his business goals if he had ultimate political and financial power in Gotham, so he convinces the Penguin to run for Mayor as the ultimate outsider, a vulgar, grope-happy creep who promises to make Gotham great again and speaks the language of the sewers because, well, that’s his true home.

In a development with absolutely no current cultural or political resonance, however, this marriage of convenience between a crazy-haired, evil billionaire who enters the political arena solely for his own mercenary ends and a rage-filled pervert launching an unlikely campaign for political office comes to an end when Batman tapes the Penguin bragging about his contempt for the people of Gotham and then plays it for the horrified populace. With his political dream destroyed, the Penguin then sets about killing Gotham’s first-born sons in a campaign that employs militarized penguins in a vengeance-fueled rage of biblical proportions.

Walken plays Schrek as a pragmatist above all else, an oily pretender who is hilariously unconvincing and disingenuous when he tries to play the role of the good-hearted public benefactor. Even in understated mode, it is absolutely gut-busting to hear Walken deliver the line, “I’m just a poor schmoe; got lucky.”

It’s the cold-bloodedness Walken brings to the character that makes him so unexpectedly terrifying. People mean nothing to him, least of all a woman like Selina. They’re just chess pieces to be moved around a board. The only thing that matters is winning, and if that means getting into bed with a man-beast like Oswald Cobblepot, then that’s what he’ll do.

As a superhero movie, Batman Returns is a mess. For the first hour, Batman shows up so infrequently that you almost want to stick a question mark at the end of the title. Does Batman really return? I mean, he shows up every once in a while to remind you this isn’t a Catwoman spin-off, but for the film’s first half, Batman Cameos would be a more honest title. For an action movie, Batman Returns doesn’t seem particularly interested in action scenes, although it does seem awfully interested in the complicated political landscape of Gotham and the illicit union of financial might and political power.

Thankfully, Batman Returns isn’t really a superhero movie. Oh sure, it’s based on one of the best loved comic book characters in existence but it’s really a twisted dark comedy combined with a tragic, gothic romance. Burton did not make a Batman movie for the masses. No, he made a Batman movie for the gothic, angst-ridden, teenaged malcontent he used to be, and the gothic angst-ridden, teenaged malcontent in all of us.

The film only seems interested in Batman when its second hour pushes Schrek and his machinations to the back-burner so that it can focus on the sizzling sexual chemistry between both Bruce Wayne/Batman and Selina Kyle/Catwoman. Selina Kyle and Bruce Wayne are two lost souls, hiding from themselves as well as the world, who see in each other the flickering promise that they might not be alone in the universe. It’s a tiresome cliche for the hero and villain in superhero movies to be mirror images of each other, but Batman Returns takes that groaning convention and makes it sexy and fun and fresh all over again.

Like Christopher Nolan’s The Dark Knight Rises, Tim Burton’s Batman Returns is too long, too self-indulgent, too shapeless, too messy, and has too many characters and subplots. Yet it’s pretty great all the same. Perhaps not coincidentally, The Dark Knight Rises also brought back Catwoman, and while Anne Hathaway was fine in the role, the difference between her Catwoman and Pfeiffer’s is the difference between solid and transcendent, between something that’s good enough and something that will be spoken about in hushed tones fifty years from now, the same way Heath Ledger’s Joker will be.

Batman Returns is a film of deliberate excess, less concerned with fulfilling audience expectations and the demands of the hyper-commercial Christmas superhero movie than it is in realizing its director’s idiosyncratic vision. It is so personal, so overreaching, and so agreeably weird and Tim Burtony that it seemingly left him nowhere to go, just as the Dark Knight trilogy realized the full extent of Christopher Nolan’s vision for the character.

As I stated earlier, Batman Returns is a dark comedy. It’s also a tragic romance that really drives home that there are only two letters separating “Gotham” from “Gothic.” It’s also, perversely but appropriately enough, a Christmas movie, not unlike the all-time favorite Yuletide classic Die Hard. The film takes place in the weeks leading up to Christmas and ends on Christmas day. This makes everything that happens in the movie a nightmare before Christmas.

Speaking of which, Burton would release The Nightmare Before Christmas — which he produced but didn’t direct — the very next year; for all its morbid charms, it marks the beginning of the filmmaker’s long, slow descent into fruitless self-parody. He’s done good work since then: Ed Wood is a masterpiece, Mars Attacks is a snarky, subversive delight, and I like Big Fish and Sweeney Todd more than most. But when a project looks Tim Burtony these days I almost invariably see it as a negative, particularly if Burton is actually involved.

So part of the pleasure of revisiting Batman Returns, beyond the four leads’ charisma and the amazing, Mad Men-by-way-of-The Fountainhead production, lies in returning to a time when a movie being very Tim Burtony was not only unambiguously a good thing, but in the eyes of a teenager who grew up worshiping him, the very best thing. 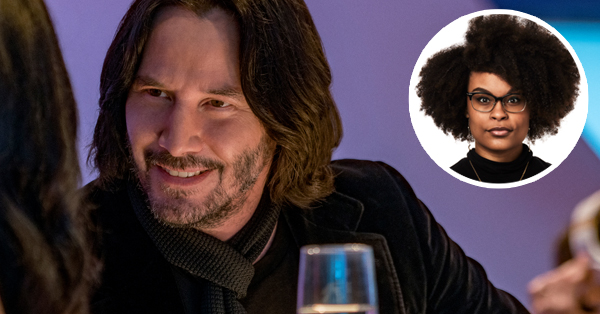