Why Ballistic: Ecks vs. Sever Is the Most Rotten Movie of All Time

We take a look back at the worst-reviewed film on RT on the 15th anniversary of its release.

This site tallied together the score of no less than 116 reviews (that’s a lot!), and not a single one was deemed positive. There wasn’t even a single contrarian, Armond White-style hot take — something like, “Ballistic: Ecks vs. Sever is the most important, humane and misunderstood film of the last forty years” — to throw off the film’s perfectly terrible score.

Usually when a movie is dubbed the worst of its time, or of all time, there’s a motley crew of defenders insisting that what critics and respectable folks think make it unforgivably awful is secretly what makes it awesome. That’s not the case here. As far as I know, there is no cult for this sad little orphan, just detractors.

Ballistic: Ecks vs. Sever’s arctic critical reception isn’t its only claim to infamy, though. The film was developed in tandem for what was supposed to be its official Game Boy Advance video game adaptation. But the production process for the film took so long that, by the time Ballistic: Ecks vs. Sever hit theaters, its much better-reviewed game “adaptation” Ecks vs. Sever had been commercially available for close to a year. This meant that the movie looked like an adaptation of the game, instead of the other way around.

Ecks vs. Sever is the only video game released before the film that inspired it even entered production, so the game was revised according to changes in the evolving film script, like when Sever’s gender was changed from male to female. At one point Wesley Snipes and Jet Li were set to star, then Vin Diesel and Sylvester Stallone, but they ended up with the duo of Antonio Banderas and Lucy Liu, who weren’t big names, necessarily, but at least had zero chemistry and were equally committed to exerting as little energy as possible in what everyone must have realized early on was a losing proposition. Probably when they saw the film’s title.

As a video game, Ecks vs. Sever was such a success it inspired a sequel more true to what the film version eventually became, in what I imagine is a rare case of a famously failed movie inspiring multiple video games. 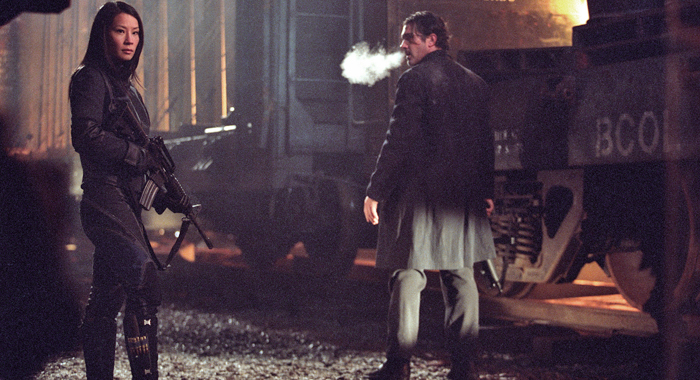 Given Ballistic: Ecks vs. Sever’s tortured and unique production history, it shouldn’t be surprising that the movie feels like the fourth entry in a multi-media Ecks vs. Sever saga rather than an original film. Even its opening scenes feel like the exhausted third act of the second sequel to a generic international action-thriller that never should have been made in the first place. The movie reportedly cost $70 million to make, and I’m guessing most of that went to the “gratuitous explosion” budget, while the rest was spent on long coats and wind/rain machines.

The film’s plot, which is at once insanely convoluted and annoyingly simple, also ultimately reneges on the promise of its title. It follows the spy-versus-spy machinations that ensue when rogue agent Sever kidnaps Michael, the child of retired FBI agent Jeremiah Ecks’ wife — and the apparent son of a bad guy secret agent guru played by Gregg Henry. A despondent, drunk, and grief-stricken Ecks is lured back into action to track Sever down, but it isn’t long until they discover they’re on the same side and team up to bring the pain to the man who convinced Ecks his family was gone.

As Ecks, Banderas has the scruffy, world-weary air of someone who hasn’t shaved, bathed, or changed his clothes since his wife was killed in a car bombing  — a scene the movie returns to again and again in histrionic, over-the-top flashbacks until the effect is unintentionally comic rather than tragic. Though Banderas can be enormous fun, Ballistic frustratingly refuses to allow him to be himself. The funny, brawling, live-wire charisma he brought to his best roles is replaced by a dour, black-eyed humorlessness that any number of second-rate action heroes could have contributed to the role.

On the other hand, early in the film, a slight figure in a long coat with a fisherman-style, vision-impeding hood dispatches a whole bunch of bad guys with improbable, wildly implausible ease. The filmmakers deliberately obscure this mysterious dynamo’s face so that the audience can be shocked and overwhelmed to discover that the person kicking ass in this Lucy Liu vehicle is (gasp!) Lucy Liu.

This is only the first instance of the movie being far more blown away by what Liu is doing — which is almost nothing — than is justified. Ballistic: Ecks vs. Sever repeatedly tries to depict its theoretically complicated anti-heroine as a minimalist badass of few words who prefers to communicate in the universal language of gunfire and bone-crushing punches. It desperately needs Liu to be a young Steve McQueen, or Clint Eastwood, or Pam Grier. Instead, they got a TV actress with a permanent scowl and the expressiveness and emotional range of a constipated android.

If Ballistic was, in fact, the sort of video game it resembles, then Liu’s character would be operating in “God Mode” the entire time. When Sever punches or kicks someone — with all the force and energy of a senior sweating to the oldies, by the way — they invariably recoil backwards as if they’ve been hit by the full force of a two-ton wrecking ball. Whenever she shoots from her massive arsenal of freakishly accurate weapons, she doesn’t just hit her target every time, they all explode dramatically.

Ballistic: Ecks vs. Sever takes place in British Columbia, which the film depicts as an endless eyesore of depressing Eastern Curtain style architecture, a grim, ugly morass of concrete and stone and perpetually overcast skies. It takes the monochromatic darkness of The Matrix to parodic levels, as Banderas and Liu spend much of the movie essentially cos-playing as Neo and Trinity. The movie’s ridiculous title, production history, and historically icy reception give it an undeniable element of novelty, but otherwise this alternates between being totally generic and a limp melange of tropes and cliches ripped off primarily from the Wachowskis, but also the films of Tony Scott and John Woo.

Ballistic: Ecks vs. Sever doesn’t have all the right ingredients for a goofy guilty pleasure so much as it has all of the most expected ingredients. It’s everything that’s wrong with early 2000s action movies in one singularly unappealing, unpalatable package, complete with a nonsensical title that’s a maraschino cherry on top of the movie’s three scoop sundae of grim miscalculation. 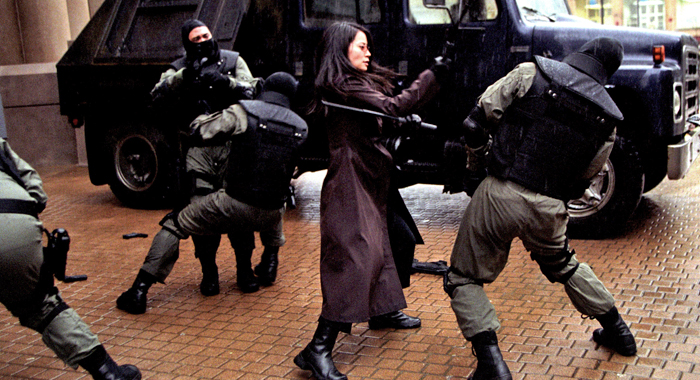 This isn’t just another action flick, this is a SUPER ACTION FLICK! When I see a flick that is supposed to be an action flick, I expect to see a lot of action. This flick doesn’t disappoint. I suspect another Detroit assembly line had to be opened up just to supply the cars blown up in this film. Apparently they ran out of cars because towards the end of the film, they started blowing up railroad cars!

Lucy Liu really delivers the goods here. Watch her as she runs through an underground parking garage in one scene. She runs with her mouth closed, just like that liquid terminator played by Robert Patrick in T2. Watch Antonio Banderas race around on a motorcycle without a helmet on. I was very surprised they let him do that.

This movie screams sequel to me. I hope they have one using the same cast and director. One small detail. Watch for Antonio to kill the bad guy’s Brit sidekick then watch the Brit sidekick show up a few scenes later. 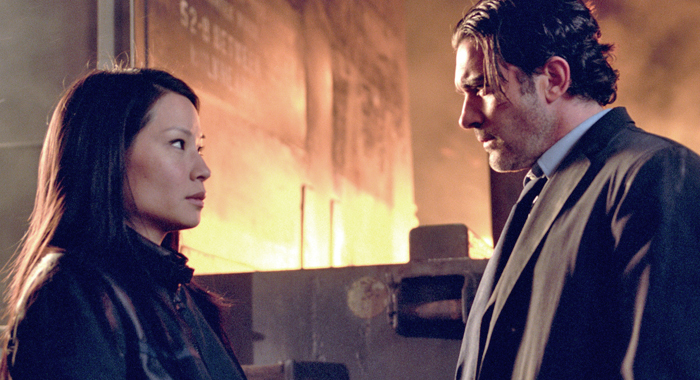 Does Ballistic: Ecks vs. Sever deserve to be the worst reviewed movie in Rotten Tomatoes history? I don’t think so. I think that honor should belong to a movie with more personality, or with any personality at all.

At the same time, I do think it deserves its universal zero. It’s exhausting, exhausted, and forgettable, with one bizarre and notable exception. During one of the movie’s many thrilling sequences of “people at computers looking at documents,” something in a file on Sever is referred to “werewolf grade.” There’s no real context for “werewolf grade,” nor does the film offer any explanation, yet I couldn’t help but fall in love with that phrase all the same.

What exactly would werewolf-grade entail? I have no idea, but if they remade Ballistic: Ecks vs. Sever with a werewolf in the lead, we might finally have a movie flamboyantly terrible enough to really earn the honor of the worst of the worst.

At the very least, the curious phrase left me with an intense desire to use it in a sentence, so I’m going to say that Ballistic: Ecks vs. Sever isn’t just bad. It’s werewolf-grade bad, and lycanthropes, like this particular all-time loser, are just the worst.

Nathan Rabin is a freelance writer, columnist, the first head writer of The A.V. Club and the author of four books, most recently Weird Al: The Book (with “Weird Al” Yankovic) and You Don’t Know Me But You Don’t Like Me.Follow Nathan on Twitter: @NathanRabin