Jerry Zucker's zany comedy is silly and a little dated, but it's also got something to say in its own wacky way. 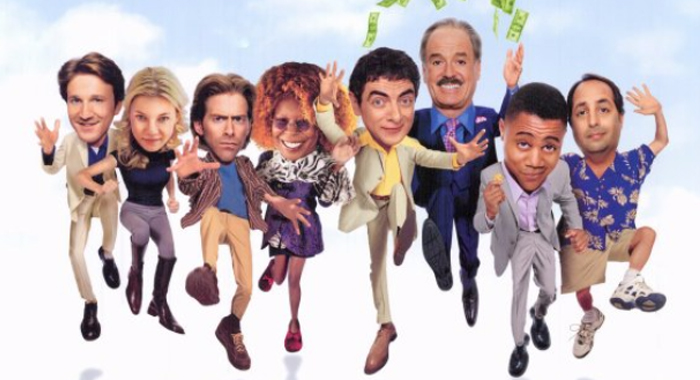 With 1963’s It’s A Mad, Mad, Mad, Mad World, producer, director and soul of Liberal American Hollywood Stanley Kramer set out to make the biggest — if not necessarily the best — comedy of all time. He more or less succeeded, but because he was Stanley Kramer, he also sought to make one of his big trademark social statements. Unsatisfied with merely scoring big belly laughs, he used the film to comment on the way money and competition can transform normal, ordinary Americans into crazed monsters of greed and ruthless self-interest. It was not a particularly subtle or sophisticated message, nor a particularly original one, but that element of social commentary has proven important to the film’s surprising longevity and influence.

More than six decades later, It’s A Mad, Mad, Mad, Mad World is still arguably the biggest comedy of all time. It’s so vast in every sense that a number of movies have been able to live healthy, vigorous lives entirely in its outsized shadow. Kramer’s film inspired an entire subgenre of movies about disparate groups of kooky characters all chasing after the same prize: 1979’s Scavenger Hunt, 1980’s Midnight Madness, 1981’s The Cannonball Run and its sequel, 1987’s Million Dollar Mystery, and 2001’s Rat Race all qualify.

In their frenzied machinations and central quests for tacky, tawdry prizes, these zany comedies represent something approaching capitalism in its purest form. Movies like Jerry Zucker’s Rat Race don’t just tacitly imply that a wild, irrational lust for money is endemic to our national character — they argue that greed is the American character.

Rat Race is both a celebration and a spoof of American greed and the desperation it engenders. The film was released to lukewarm reviews and decent box office returns, but it has since become something of a basic-cable classic. Its remarkable durability is attributable at least partially to the public’s enduring love of It’s A Mad, Mad, Mad, Mad World, but it’s also an unfortunate reminder how rare solidly funny mainstream studio comedies with a few memorable set-pieces are.

Like Kramer’s film, Rat Race quickly whips itself into a fine, frothing frenzy of automotive destruction and naked desperation. But it starts off slow, introducing the various players who will be competing for the $2 million stashed in a locker in New Mexico by billionaire hotel magnate Donald Sinclair (John Cleese), who operates in Las Vegas, that most American of American cities.

Sinclair decides to pit six teams against each other in a mad dash to be the first to retrieve the fortune. There’s an additional element of social commentary present in the fact that no one asks why he’s so eager to give away so much money in the first place. He only volunteers that he’s eccentric (something that, to be fair, does seem to explain and/or excuse a lot of strange, egregious behavior), and they’re so blinded by money-lust that they’re not inclined to prod much further.

In actuality, this tall, sinister hotel mogul named Donald is running a much bigger game than the rubes sweating over his money realize. The chase is merely an elaborate play to make an even bigger payday by inviting his casino’s high-rollers to bet on which team will win the money. Sinclair tells the gamblers he’s offering nothing short of a “horse race with animals who can think and plan and lie and cheat and play dirty.”

The competitors include Owen Templeton (Cuba Gooding Jr.), a referee who begins the film desperately trying to live down a famously bad call. It’s but one of a series of humiliations that the film inflicts on his character. When he’s not pretending to be a bus driver ferrying around a gaggle of Lucy Ricardo impersonators, he spends much of the film running around the desert in his underwear. It’s a role that plays to his bottomless eagerness to humiliate himself, as well as his flair for physical comedy and his knack for enduring the torments of the damned, all for the sake of a paycheck.

Rowan Atkinson — a bona fide British comedy icon (like Cleese) — plays Enrico Pollini, a broadly sketched, elfin, Italian man-child and narcoleptic that feels simultaneously like an affectionate and damning parody of Roberto Benigni’s persona as an oblivious sprite happily bumbling through a charmed life. Breckin Meyer, meanwhile, is typecast as the token square of the group, a responsible businessman roped into the craziness, and Seth Green plays half of a pair of con artist brothers opposite a character whose defining feature is that his tongue is pierced, forcing him to spend the entire film in a state of semi-comprehension.

The six teams of schemers are rounded out by an estranged mother-daughter duo led by an uncharacteristically restrained Whoopi Goldberg and, finally, Jon Lovitz as a mild-mannered husband who ignores his wife’s pleas not to gamble when he works out the 1-in-6 odds of winning Sinclair’s millions.

Lovitz and his family figure prominently in the film’s funniest running gag, one so weird, so inspired, and so brilliantly sustained that it goes a long way toward setting Rat Race apart from other comedies like it. Early in the film, he and his family spy a sign for something called “The Barbie Museum” and eagerly pull over, only to discover that, to their shock and terror, this particular Barbie museum is not devoted to the insanely popular fashion doll beloved by American girls, but to Klaus Barbie, a somewhat infamous Nazi.

There’s something about the specificity of the gag that elevates it and makes it unforgettable. It’s not just any unassuming roadside Nazi museum this Jewish family stumbles into. No, this one is intensely focused on one particular Nazi and staffed by men who dress like typical skinhead punks, but who approach their jobs as museum guides with hilariously misplaced solemnity. The eventual reveal that the “Barbie” in question is Klaus Barbie is explosively funny, thanks in particular to Lovitz’s appropriately mortified expression and body language.

What follows is almost as funny, as the milquetoast Jewish family man decides to exact a bit of belated revenge on the Nazis for that whole “holocaust” thing by stealing Hitler’s car, which also happens to carry such unexpected wonders as Eva Braun’s lipstick and Hitler’s harmonica. The idea of Hitler blowing gritty blues riffs is funny enough in its own right, but Rat Race ratchets up the weirdness until, through a series of unfortunate accidents, Lovitz ends up addressing a group of World War II vets looking and sounding for all the world like the reincarnation of the Führer himself.

Green, meanwhile, handles a lot of the film’s vehicular slapstick, barely surviving an endless series of near-fatal scrapes. It’s not too much of an exaggeration to say that about half of the actor’s dialogue is “Ahhhhh!!!” and “No!!!” That goes for much of the rest of the cast as well. Like a true child of It’s A Mad, Mad, Mad, Mad World, Rat Race features some gags expertly executed by veteran funnymen and women, but also some gags executed by veteran stuntmen.

Also similar to Kramer’s film, the tone here is one of unrelenting zaniness. Even before Goldberg’s character and her daughter avail themselves of the kind of rocket car Wile E. Coyote uses extensively (always to unfortunate ends), Rat Race still feels unmistakably like a live-action version of a classic Warner Brothers cartoon, and that is never a bad thing.

Rat Race does come up short, however, on star power, at least compared to its distinguished predecessor. It’s A Mad, Mad, Mad, Mad World had everybody. For a bit part, it was able to roll out Jack Benny or Groucho Marx. Rat Race, in sharp contrast, has to settle for the likes of Paul Rodriguez and Dean Cain. Thankfully, some of the superstar cameos connect in a big way, like Kathy Bates in a hilarious role as a small town eccentric who goes to extreme lengths to punish people for not buying the squirrels she’s selling.

Rat Race feels less like an early aughts movie than a very late 1990s movie. The music cue that sets off the craziness is, of course, Baha Men’s “Who Let The Dogs Out,” which feels strangely perfect, and the ending, during which the competitors all decide to do something deeply un-American and give the money away to charity, takes place in the best possible forum for such a gesture: a giant charity concert headlined by Smash Mouth.

Yes, Smash Mouth. And if you think Smash Mouth is going to appear in a film — or anywhere, really — without performing “All Star”, then you are a fool. So “All Star” ends, as it must, and this goofy, oddly timely and trenchant delight closes with the cast dancing and crowd-surfing to the feel-good anthem. If there is a moment in American cinema, or cinema as a whole, that is more sublime and artful than Cuba Gooding Jr. breakdancing alongside the members of Smash Mouth as they perform “All Star” for a Woodstock-sized crowd, I am not familiar with it. Also, I am certain that it does not exist.

A lot of people are desperately bummed right now for reasons I probably don’t need to go into. What better way to forget recent events than by watching a solid, at times explosively funny, sneakily satirical popular favorite about an eccentric, sadistic billionaire hotel mogul named Donald who pits a bunch of desperate Americans against each other, all for the benefit of his own bottom line and his greedy, debauched billionaire cronies? It’s escapism at its finest! 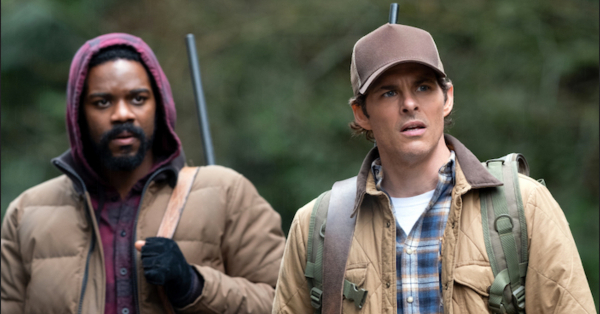 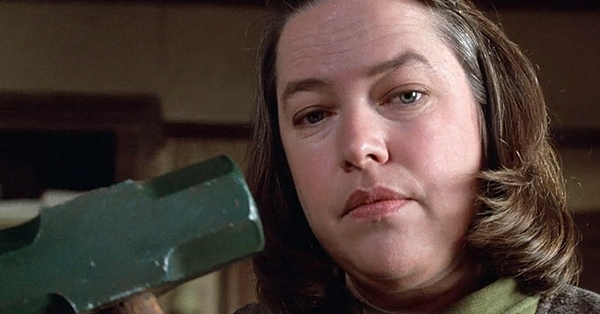 Hear Us Out: 30 Years Later, Misery Is Still the Most Terrifying Treatise on Toxic Fandom