Michonne, Carol, and Yumiko cut down some Walkers with Daryl before their confrontation with Alpha, Beta, and the Whisperers.

In the trailer for The Walking Dead season 9, episode 15, “The Calm Before,” Alpha (Samantha Morton) looks on while Beta (Ryan Hurst) says, “No one else will have to die now that deal is done,” and then Daryl (Norman Reedus) appears to walk off with them. But what leads up to that relatively chatty moment with the Whisperers? A savage beat down, shown here in our exclusive clip from Sunday’s episode. Daryl, Michonne (Danai Gurira), Carol (Melissa McBride), and Yumiko (Eleanor Matsuura) must take out the group’s usual Walker onslaught before negotiations can begin.

About the episode:
The fair at the Kingdom is underway, with all four communities coming together in celebration for the first time in years. While some pacts are renewed, other deals will come at a much steeper price.

The Walking Dead airs Sundays at 9 p.m. on AMC. 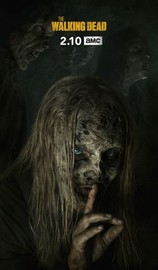 #1
Adjusted Score: 91.687%
Critics Consensus: Nine seasons in, The Walking Dead feels more alive than ever, with heightened tension and a refreshed pace that rejuvenates this long-running franchise.
Synopsis: Last season brought the culmination of "All Out War," which pitted Rick Grimes and his group of survivors against the... [More]
Starring: Andrew Lincoln, Norman Reedus, Chandler Riggs, Danai Gurira

The Best Peacock Original Shows and Movies (May 2021)

The Best Apple TV+ Shows and Movies, Ranked by Tomatometer (May 2021)