The Sex and the City sequel's Tomatometer score is hovering above Rotten, while Dexter: New Blood is solidly Fresh, and Cowboy Bebop has been canceled. Which other familiar properties returning to TV and on streaming have a chance at a Fresh score?

And Just Like That… we have another sequel. Or a continuation. But not a remake.

HBO Max’s latest project in the Sex and the City cinematic universe (SATCCU) premiered December 9 and is if nothing else, be a sartorial extravaganza. (Even though, like actress Kim Cattrall, original series costume designer Patricia Field is not returning. She’s handed the costume design reigns over to Molly Rogers and Danny Santiago.)

The launch of this new-old show comes not even a month after the premiere of Netflix’s live-action take on anime classic Cowboy Bebop. But, despite having an all-star cast that includes Mustafa Shakir, Daniella Pineda, a smoldering John Cho and a corgi, the space bounty hunter series suffered from negative reviews and was canceled after one season.

Similar pitfalls came for HBO Max’s sequels of Head of the Class and Gossip Girl. Meanwhile,  Showtime’s Dexter revival, Fox’s Fantasy Island, and The CW’s 4400 did slightly better, and Peacock’s Saved By the Bell, Disney+’s Doogie Kameāloha, M.D., and ABC’s The Wonder Years are adored.

There are plenty of other remakes, re-imaginings, and reboots of classic TV still to come. But what are the chances any of them will be any good? We look at some contenders.

How This Is Different: A deviation from the cult series that caused hundreds of women in flower pins, gold necklaces and tutus to move to New York City, HBO Max’s next installment of SATC premiered with at least one major change: The original foursome of friends will be down Kim Cattrall’s publicist Samantha Jones and will instead just focus on Sarah Jessica Parker’s Carrie Bradshaw, Cynthia Nixon’s Miranda Hobbs and Kirsten Davis’ Charlotte York. How Samantha’s absence affects the friend group is of major concern to fans interested in this new story, which is said to follow the friends from the complicated reality of life and friendship in their 30s to the even more complicated reality of life and friendship in their 50s.

Chances It Will Be Certified Fresh: As much as Sex and the City was adored during its original run, many fans and critics feel that a lot of the stories — particularly when it comes to diversity and sexuality — have not aged well. New cast members like Sara Ramirez and Sarita Choudhury may help with that. But don’t be surprised if viewers end up saying “I’m sorry. I can’t. Don’t hate me.” (The show’s audience score dropped into the 30s soon after the premiere.)

How This Is Different: Mr. Robot creator Sam Esmail is executive producing a new Battlestar for Peacock — a series he has repeatedly said is not a reboot of Moore’s series. Michael Lesslie had been serving as showrunner, but it was reported in the spring of 2021 that he’d left the project and was now working with Hulu on an adaptation of Margaret Atwood’s novel Maddaddam. Before that departure became public, Esmail told Collider that “I think we’ve got the basic construction of the type of story we want to tell, the part of mythology that we’re gonna explore — because Battlestar does have a rich mythology and again I have to give Ron a lot of credit for that — and so now we’re sort of closing in on what that pilot’s gonna look like.”

Chances It Will Be Certified Fresh: Moore’s take on Battlestar is an adored piece of science fiction, and Esmail seems aware that there’s an awful lot of pressure not to frack this up.

- - The Fresh Prince of Bel-Air

How This Is Different: This drama about a kid from West Philadelphia who heads to the toniest parts of Los Angeles isn’t so much a remake of the classic Will Smith sitcom as it is a variation on director Morgan Cooper’s viral video that re-imagined that comedy as a drama. Peacock gave the series a two-season order with Jada Pinkett Smith and Will Smith’s Westbrook Studios producing and Cooper directing and co-executive producing (The Wire’s Chris Collins serves as showrunner and an executive producer). According to Deadline, the one-hour serialized drama will “dive deeper into the inherent conflicts, emotions and biases that were impossible to fully explore in a 30-minute sitcom format, while still delivering swagger and nods to the original show.”

Chances It Will Be Certified Fresh: Lots of people are rooting for this to work and the current media climate seems ready to see a story that tackles such intricate topics.

How This Is Different: Much like the original series, creator Miranda Kwok’s new Fox series (which premieres January 3) is the story of a mother with a sick child who accidentally winds up in a life of crime after she impeccably cleans a murder scene. This version also brings in issues of immigration, wealth, and healthcare access because she’s in this country illegally as she holds out hope for medical treatment for her son.

Chances It Will Be Certified Fresh: It’s an anti-heroine story that Kwok stresses is very different from, say, Bryan Cranston’s Walter White on AMC’s Breaking Bad. In that show, she told Variety, Walter “eventually embraced his descent into darkness,” while her lead — Élodie Yung’s Thony De La Rosa — will be “constantly battling her own moral center.” It could end up being one of the most complex procedurals on broadcast TV. 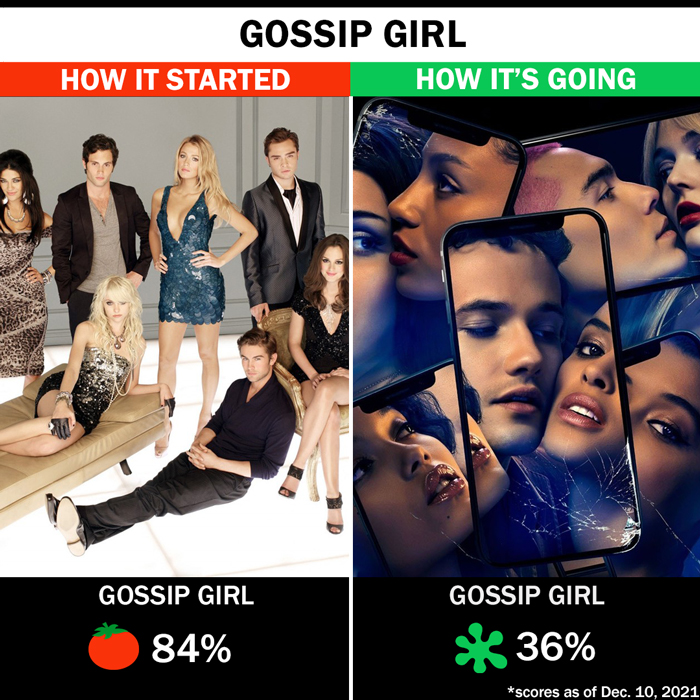 (Photo by The CW/HBO Max)

How This Is Different: Honestly, it could be almost exactly the same and still be brilliant. But the series, which has a two-series order at HBO Max and has Erica Rivinoja serving as showrunner, is acknowledging its short-lived greatness by titling its first episode “Let’s Do This Again.”

Chances It Will Be Certified Fresh: A lot has changed since the series ended in 2003. While some might not enjoy seeing, say, a clone of Mahatma Gandhi as a party animal, it would be fun to see what other clones could be introduced. A suggestion: Ruth Bader Ginsburg.

Fraggle Rock: Back to the Rock

How This Is Different: The musical series will bring back classic Fraggles like Gobo, Red, Wembley, Mokey, and Boober, but will also introduce new characters when it premieres January 21, 2022 on Apple TV+.

Chances It Will Be Certified Fresh: Well-done takes on nostalgic, kid-friendly, programming like Hulu’s Animaniacs have set the bar pretty high. But the fact that this show is executive produced by The Jim Henson Company’s Lisa Henson (the daughter of founders Jim and Jane) and Halle Stanford as well as longtime Henson collaborator John Tartaglia suggests a promising return. 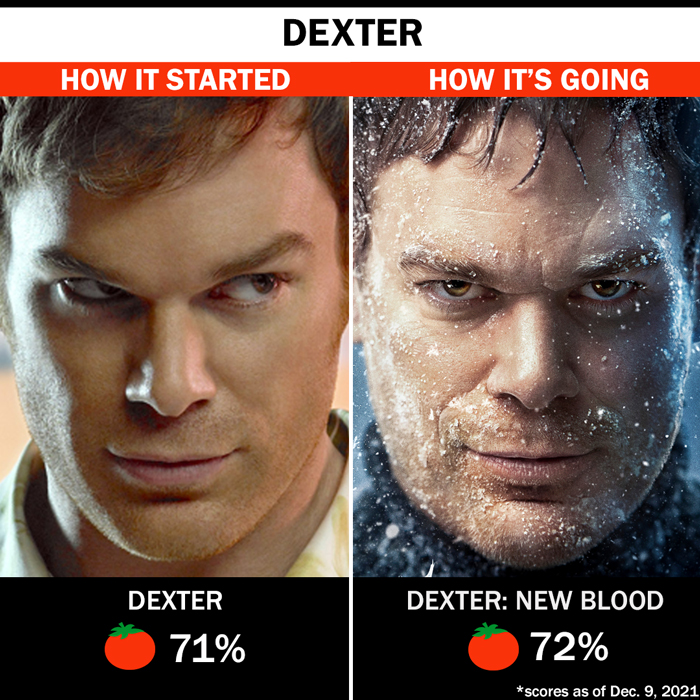 How This Is Different: It’s unclear at this point how Paramount+’s reboot will be any different than the long-running story of a Seattle psychologist with his call-in radio show. But, as The Hollywood Reporter points out, it’s being written by How I Met Your Mother’s Chris Harris and Life in Pieces’ Joe Cristalli — aka the guy who once ran the Twitter account @FrasierContempo that featured potential modern scenarios for the show’s characters.

Chances It Will Be Certified Fresh: Fraiser is a beloved show, yes. But with the ability to see the original online (it’s currently available on rival streamer Peacock), is anyone really listening for this one?

- - Daria — MTV’s Xennial-favorite animated series Daria, which was about sardonic teen Daria Morgendorffer (itself a spin-off of Mike Judge’s Beavis and Butt-Head series)

How This Is Different: This Comedy Central series, which is created by Grace Edwards and features the voice of Tracee Ellis Ross, will concentrate on Daria’s friend Jodie Landon just after she’s graduated college and started work in the tech industry. The show will reportedly feature themes of “empowerment along gender and racial lines, explorations of privilege, and a wicked sense of humor.”

Chances It Will Be Certified Fresh: The world needs more sardonic 20-somethings right now. Especially ones who know how to take down the patriarchy with a simple side-eye and basic HTML coding. 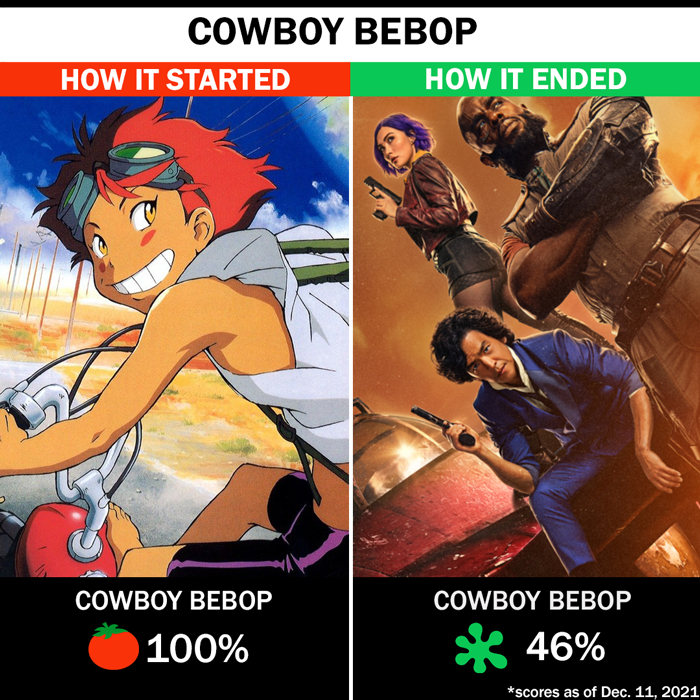 Joe Millionaire: For Richer or Poorer

- - Joe Millionaire — one in a long line of reality series that used a bait-and-switch premise to dupe unsuspecting attractive people into participating in a TV series (in this show, which premiered in 2003, a bunch of women thought they were battling it out in a house for a rich, attractive heir — turns out he was just an attractive construction worker)

How This Is Different: Fox’s reboot, which premieres January 6, has 20 women date two men. One is a millionaire and the other is an “average Joe” with meager finances. Can they sleuth out which is which? Or does it matter and love will conquer all?

Chances It Will Be Certified Fresh: It may not get great critical reviews, but it’ll probably be a ratings hit.

How This Is Different: The fourth (yes, fourth) series in the PLL franchise comes from Riverdale’s Roberto Aguirre-Sacasa and Lindsay Calhoon Bring instead of original Liars creator I. Marlene King. The HBO Max series will follow a new group of Liars who are being tormented by a mystery “A”ssailant who wants to make them pay for the crimes their parents committed 20 years ago. Well, that doesn’t seem very fair.

Chances It Will Be Certified Fresh: The other PLL spin-offs didn’t really work. But have Aguirre-Sacasa and Calhoon Bring figure out King’s secret? (And can they keep it?).