What To Expect From Riverdale Spinoff Katy Keene

Find out how the New York-set series ties in to Riverdale, how music figures into the show, and what familiar faces you might see. 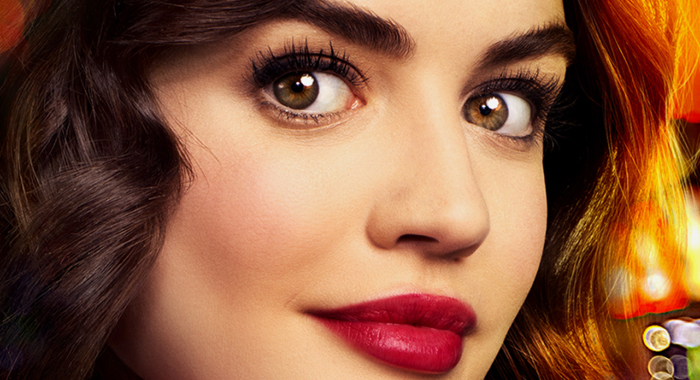 With its glitz, glamour, and can-do attitude, The CW’s Katy Keene may seem more like an echo of the network’s Gossip Girl than an extension of the emerging Riverdale universe. And that difference may cause fans of the mothership series – or its Netflix cousin, Chilling Adventures of Sabrina – to look at it with some pause. Some of those fears may be unfounded, as Katy Keene charts a new corner of the Archie Comics world on television. Join us as we examine some of the program’s unique details and why it fits in both The CW’s lineup and a place not too far from Betty (Lili Reinhart) and Jughead (Cole Sprouse).

It’s Got A Magical Tone 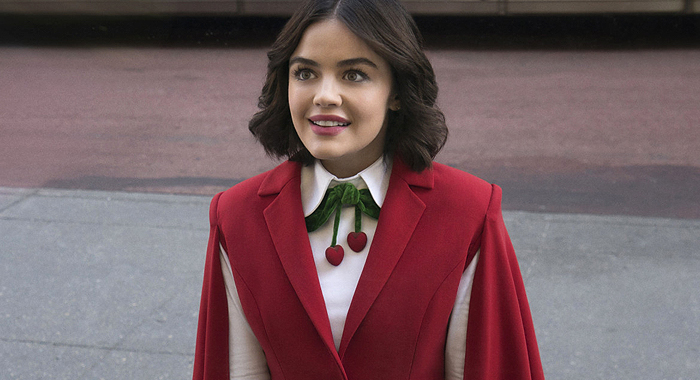 From his earliest discussions about the program, executive producer Robert Aguirre-Sacasa promised it would have a magical tone. In much the same way Riverdale’s atmosphere stems from film noir and the series occasionally flirts with horror tropes, Katy Keene’s sense of magic seems to come from romantic comedies in which the world itself is, on the whole, a good place. The city Katy (Lucy Hale) walks through is brighter, its denizens smile widely, and a song could break out at any moment.

And although the series would seem to set up romantic travails for its four principal characters — and each has someone in their lives — their truest romance is with the city itself and the sense that anything can happen there. Compared to the way the Riverdale gang seem to loathe their hometown and the soul of Greendale seems a secondary concern for the Sabrina characters, the love of place is a refreshing change – but it might drive those less enamored with New York a little crazy. 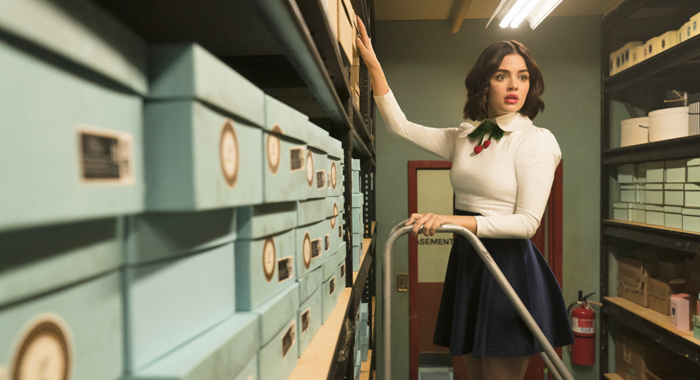 Though the program avoids specifics in its early episodes, the show takes place sometime in Riverdale’s future. Some reports indicated a five year gap exists between them, but we saw no indication of that. Early on, Josie McCoy (Ashleigh Murray) makes references to the time spent between leaving town with her father (as seen last year on Riverdale), but avoids elaborating too much on where she’s been. Additionally, Katy herself is a contemporary of Veronica Lodge (Camilla Mendes) – who availed herself of Katy’s costume-making skills on Riverdale earlier this season – but tells the viewers in the first episode she has been working at Lacy’s Department Store for three years. Perhaps her guest appearance on the February 5th episode of Riverdale will clear up the question of time. If Katy is already working at Lacy’s when Veronica heads to New York for some catching-up and shopping, then we know the two shows are within three years of each other.

At the same time, the lack of a precise time gap offers both shows some flexibility in terms of future crossovers or characters making long-term migrations from one series to the other. It also means events on Katy Keene are less likely to conflict with Riverdale. Luckily for both shows, Sabrina takes place in an alternate reality and keeps its Devil far from The CW.

Katy Is Your Narrator 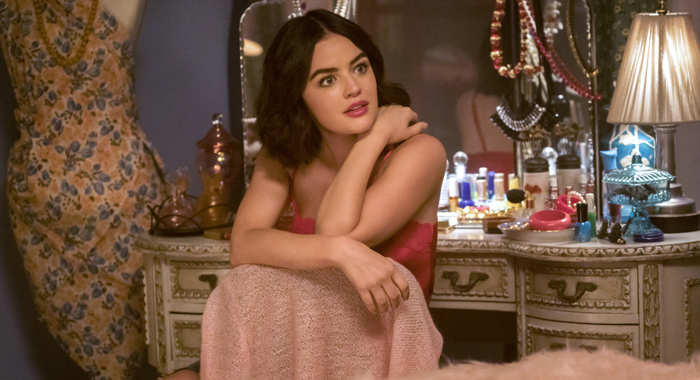 Like Jughead before her, Katy narrates the goings-on of the story. Although, from the episodes we’ve seen so far, she is only privy to her own thoughts and her own life. But also like Mr. Jones, she seems to have some omniscience or future knowledge about her life and may be speaking from some future point in time.

Created by Bill Woggon and first debuting in 1945’s Wilbur Comics #5, Katy was a popular character in the Archie stable for roughly 15 years. She appeared in various Archie Comics titles and, eventually, her own self-titled comic, in which the twenty-something character aspired to become a model, actor, and singer. Reader engagement was high, as the company encouraged fans to submit their own dress ideas for Katy to wear. But as the character’s popularity declined in the early 1960s, along with other female-focused comic book genres, she is not as well known as Archie, Sabrina, or Josie. After a short-lived revival in the 1980s (spearheaded by fans of her 1950s exploits), she disappeared once again into Archie trivia.

The television series re-imagines her as a would-be fashion designer who has a major talent as a personal shopper at Lacy’s. Seemingly mentored by department head Gloria Grandbilt (Katherine LaNasa) – who reminds us of Sabrina’s Aunt Zelda (Miranda Otto) a great deal – Katy appears to be caught between these two aspects of her chosen industry, much as her comic book counterpart vacillated between three facets of the entertainment industry. At times, she has a Veronica Lodge energy to her, so it’s not a huge surprise she’s the de facto leader of her group of friends, but we wonder how she and V really got along all those years ago. 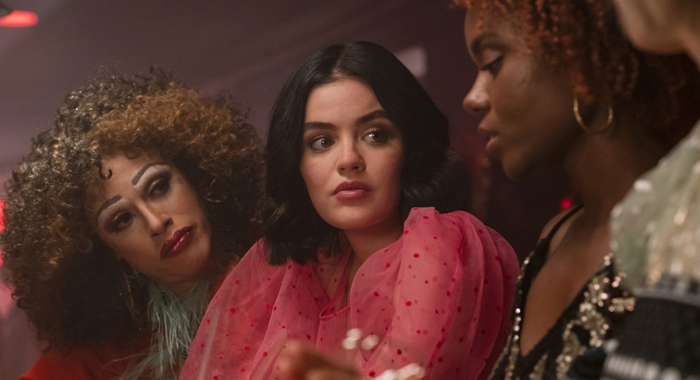 Like Riverdale and Sabrina, the fast, poppy dialogue remains a fixture, but with its references to Broadway, legendary recording studios, and fashion labels, viewers more aligned with the other shows’ reliance on film history and the macabre  may find themselves missing some of the jokes. Nevertheless, Aguirre-Sacasa’s constant voice means fans of Riverdale and Sabrina will just pick up new knowledge bases as the series progresses.

It’s Also A Josie And The Pussycats Show 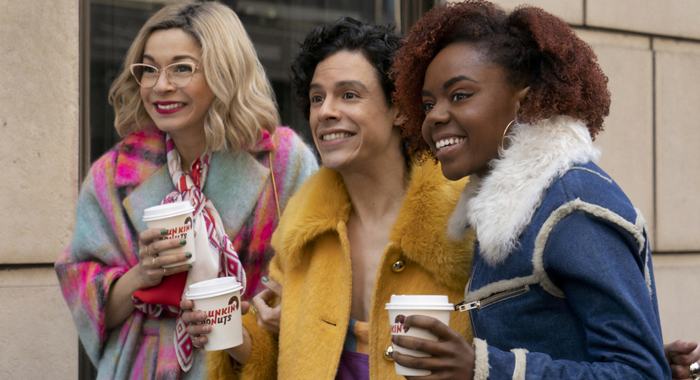 While Valerie and Melody are nowhere to be seen so far – and have been missing from Josie’s life since sophomore year of high school – Katy Keene features a lot of ideas from the Josie comic book and animated series. Pepper Smith, her original best friend in the comics, is one of Katy Keene’s four principal characters. Played by Julia Chan, she’s been re-imagined as a new media hustler with something of a shady past. Alexandra Cabot (Camille Hyde), complete with a white stripe in her hair, emerges as Josie’s first real antagonist on the series. Alexander Cabot (Lucien Laviscount) appears as a possible romantic interest for Ms. McCoy with a more idealistic vision for a record company than his comic book counterpart’s scheming for success and Josie’s affections. Nevertheless, Josie’s encounters with the Cabot siblings ring familiar from the comics, and Alexander’s interest in making Josie a star may lead to a reformed Pussycats — at least, we hope it does. Other Josie supporting characters like Albert and Sock are still missing, but maybe they’ll pop up at some pint. Long time Josie love interest Alan M. Mayberry is reportedly set to appear on the show (in the form of actor James Maslow), so it is possible the entire Jose and the Pussycats cast will populate Katy Keene.

But considering the traditional Katy Keene cast is pretty much limited to Gloria Grandbilt, her boyfriend K.O. Kelly (played on the show by Zane Holtz) and Katy’s sister (who has seemingly been erased for the TV show), the Josie group is a worthwhile set of characters to import into Katy’s orbit. Well, that’s presuming she’ll be an active participant in Josie’s story. 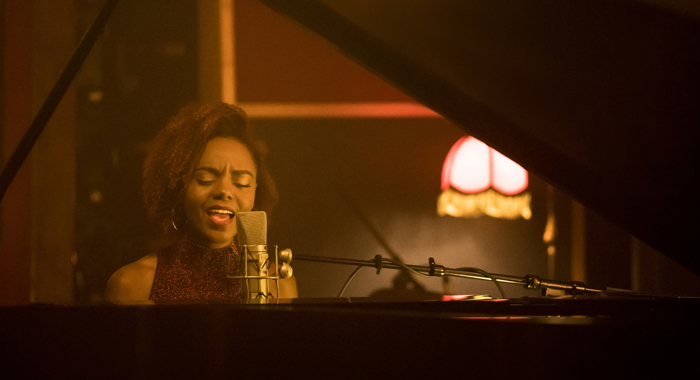 Riverdale likes its music. Whether it be Kevin Keller’s (Casey Cott) annual school production or the entertainment Veronica programs at La Bonne Nuit, the show has relied on both reality-breaking musical numbers and more diagetic performances designed to showcase the chops of its cast.

But even with the excuse of the speakeasy and Kevin’s love of musical theater, Riverdale is somewhat limited in the amount of singing it can credibly feature; keeping such scenes down to one every few episodes.

Katy Keene takes it to a whole new level, with several musical interludes per episode. Some may just feature a single person playing piano and singing, while others take to the stage at Molly’s Crisis – the favorite spot of Katy’s circle – but it’s a definite uptick from the amount of singing one might find on Riverdale.

This is by design, of course. Initial descriptions of the series noted its intention to be a “musical dramedy.” And while it may not feature as much choreography as an episode of Glee or even the level of production one might see at La Bonne Nuit, Katy Keene is very much about its cast singing.

There Are Theatrical Struggles 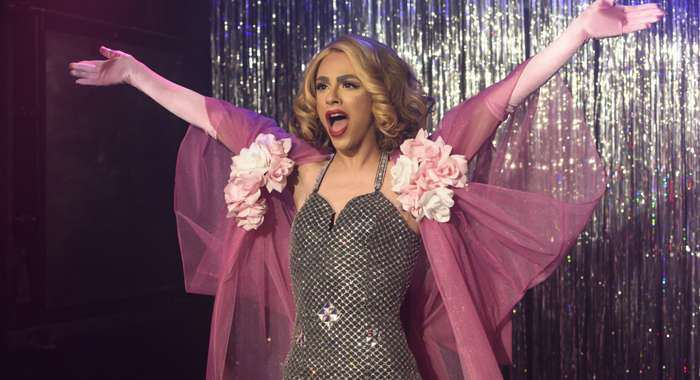 Of course, it can’t all be magical nights filled with song on Katy Keene. Drama still must occur. And in lieu of murder or witchcraft, Katy Keene’s dramatic hooks come from the characters trying to make it while maintaining their romantic notions about life. And though the show is trying to play this material in a more whimsical way – particularly with Katy’s story — the struggles are there.

Jorge Lopez (Jonny Beauchamp), in particular, has it tough as the program’s only character trying to make it on the Big White Way. Like so many before him, he wants to be a dancer in Broadway shows, but his seemingly fluid gender presentation and his drag act as “Ginger Lopez” may cause him any number of difficulties, to say nothing of the way the theater eats hopefuls of all stripes.

Meanwhile, Pepper’s real story has yet to reveal itself. Early press materials suggested she has a secret business plan, but if it’s the one she expressed in the episodes we saw, it will lead her into some rough times in the very near future — perhaps even the greatest struggle of her life.

But the presence of these struggles will, hopefully, underscore the sense of magic Katy Keene wants to cultivate about New York and establishing oneself in their 20s. Sure, the show may only be paying lip service to things like rent or the rigors of finding a career in the entertainment field, but it is trying to be a hopeful show. At the same time, we wouldn’t be surprised if it makes some sort of pivot into darker material. It is a Riverdale adjacent show, after all.

Katy Keene Season 1 premieres on Thursday, February 6 on The CW.