Despite critical acclaim and even some Oscar buzz, audiences largely preferred not to venture out to the theaters to see Spielberg's musical - or any other film, really - on the weekend of December 10-12, 2021.

The disappointment being felt at the box office this weekend shouldn’t be that a critically-acclaimed musical and likely Oscar frontrunner failed to post a higher total at the top of the box office. It should be that we are not totally out of the woods yet when it comes to the pandemic. Some people – fully vaccinated or boosted – feel safer, but others don’t. The numbers on this week’s big release share an unfortunate consistency that certain demographics just aren’t ready to return to theaters yet; they’ve gotten used to waiting. Somewhere, somehow, West Side Story will find its audience, and we’ve got a whole holiday and awards season to see if it does. 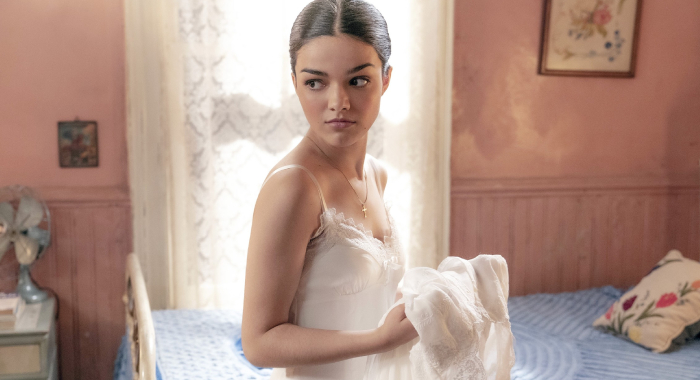 Steven Spielberg’s remake of the 1961 classic that won 10 Oscars did take the top spot this weekend, but only by just a bit more than a million dollars. West Side Story took in $10.5 million, which is the lowest #1 opening since the weekend of May 14-16 when Spiral: From the Book of Saw took in $8.75 million. West Side Story, however, didn’t play simultaneously on any streaming service like Spiral did on HBO Max. In terms of musicals, its total was more than Dear Evan Hansen started with in September ($7.44 million), but it was less than June’s In the Heights ($11.5 million), which also streamed on HBO Max on day one and was labeled a disappointment by many. Even if that was due to a lack of familiarity with the stage production, there are far fewer who can make that excuse for West Side Story. That said, being worried about a new strain of COVID-19 is a pretty good excuse, even if its one you won’t hear much of next week when Spider-Man: No Way Home opens.

Remember that pre-pandemic (and pre-Cats), December was becoming quite the month for musicals. Mary Poppins Returns, La La Land, Into the Woods, 2014’s Annie, and 2012’s Les Miserables all opened this month, and aside from Annie (which still managed $85.9 million), the others grossed between $127-171 million. The biggest of the December musicals opened to just $8.8 million and went on to gross $174.3 million. That’s right, The Greatest Showman went on to have the second-highest word-of-mouth multiple ever (19.79 times its opening weekend) for a film opening in over 2,000 theaters. The highest is Titanic. We may never see a number like that again, and there is no guarantee that even tremendous word-of-mouth over the holidays will convince adults to come back to the movies.

Only 18 films this year in that aforementioned category even grossed three times their opening weekend. (39 did not, though Encanto and House of Gucci will get there in part thanks to their pre-Thanksgiving openings.) That’s 65% of films released in 2,000 theaters in 2021. Compare that to 2019 when there were 48 films that crossed the 3x threshold and 65 that did not. That’s 58%, and none of those films had day-and-date streaming options. So maybe the divide isn’t so wide, but an extra 7% through a pandemic landscape must be taken into account; maybe it’s less of a rejection and more about having home options and weighing what’s worth the risk. There are still three more weekends of holiday box office, and those Eve holidays falling on Fridays aren’t going to help, but West Side Story still could find an audience before its 45-day theatrical window comes to an end. 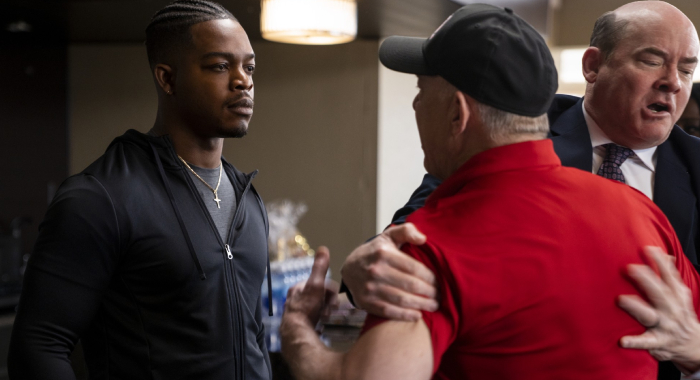 The Top 10 and Beyond: Encanto Becomes Highest-Grossing Animated Film of the Pandemic 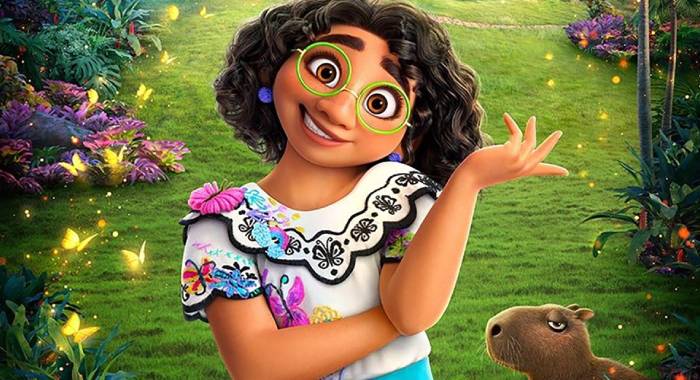 Adults who have had the opportunity to get vaccinated since early this year may not be coming back to theaters, but some with kids who have only had the option for a couple months have turned Disney’s Encanto into the highest-grossing animated film of the pandemic. Falling just 28% this week, it narrowly missed leading the box office for a third straight week with $9.4 million. That brings its total to $71.3 million, which is in the vicinity of past November releases Dumb and Dumber To, Beowulf, and Immortals, all of which had third weekends between $8.2-$8.9 million and posted final grosses between $82.2-$86.2 million. Families headed to Spider-Man next weekend may give this film a bigger hit but it will stick around into the new year to push its gross towards $90 million with the hope of a stretch into nine digits.

Another film that could be losing audiences more quickly next week is Ghostbusters: Afterlife, which grossed $7.1 million this week, driving its total to $112 million. What was once a path headed towards $140 million could be looking more like somewhere between $125-130 million, likely good enough to become the ninth-highest-grossing film of the year. Marvel’s Eternals has jumped up a spot on the chart into fifth place, passing A Quiet Place Part II with over $161 million. It will be knocked back to sixth shortly with the next Marvel film, which will likely push every film down a notch the rest of the year. That includes soon-to-be-third-place Venom: Let There Be Carnage, which is still sticking around in the top 10, just about $1.5 million away from matching the total of the first film. 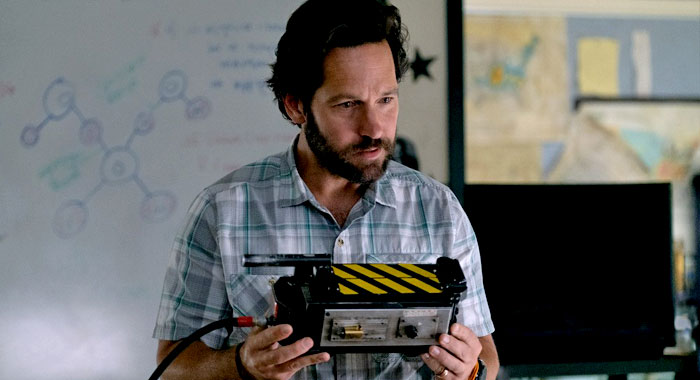 Adults may not have come out yet to see the cast of West Side Story sing, but they have, in some respect, shown up to see Lady Gaga not sing in House of Gucci. With its total up to $41 million, it is on track to finish somewhere between $47-53 million making, it the highest-grossing original R-rated film during the pandemic. Decidedly not R-rated is the faith-based Fathom Event film Christmas with the Chosen: The Messengers, which fell 62% this weekend, but its $1.28 million brings its total to $13.8 million. That is almost as much as King Richard has made, and that film has already exited the top 10 after just three weeks.

Finally, Sean Baker’s Red Rocket was released in six theaters this weekend, opening to $96,600 for a per-theater average of $16,100. That’s the fifth best PTA for a limited release this year behind Licorice Pizza, C’mon C’mon, The French Dispatch, and Bo Gia. Baker’s The Florida Project opened to $157,553 in four theaters back in 2017, a PTA of $39,388. In pre-pandemic times, that was the 14th best limited release PTA of that year. Paul Thomas Anderson’s Licorice Pizza continues to roll in just four theaters, along with previews across the country, including the Music Box Theatre in Chicago. It grossed $176,000 for a total of $1.1 million to date.

On the Vine: Spider-Man: No Way Home Set to Pull Big Numbers 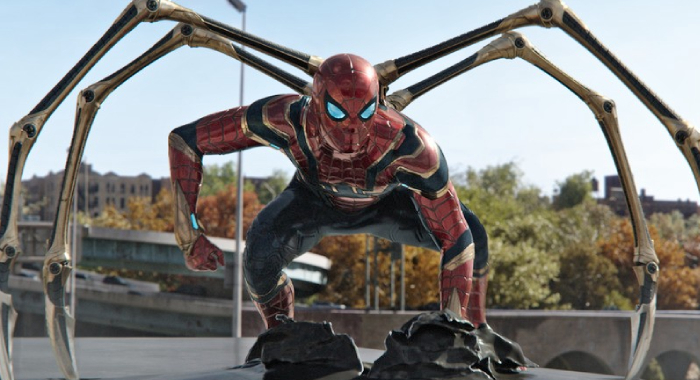 Next week, the conversation about the current state of theatrical exhibition will likely shift back to the positive. Spider-Man: No Way Home should best the $90 million opening weekend of the Venom sequel and ultimately the $224 million of Shang-Chi and the Legend of the Ten Rings. If it somehow misses either of those numbers, the industry could hit the panic button again, since this seems to be the most slam-dunk release of the year, and it could very well be the first film since 2019 to gross $300 million. Also opening is Guillermo del Toro’s remake of Nightmare Alley with Bradley Cooper and Cate Blanchett. Searchlight Pictures has not had a film gross $16 million since Jojo Rabbit did, pre-pandemic. Will adults come out for this R-rated film?