Today’s Ketchup brings you another ten headlines from the world of film development news, covering such titles as The Addams Family, Creed 2, The New Mutants, and Teen Titans Go! to the Movies.

THE DC COMICS SURPRISE LESS THAN A YEAR AWAY: TEEN TITANS GO! TO THE MOVIES 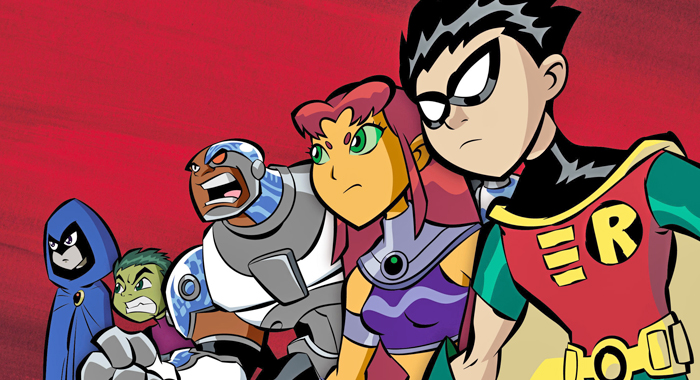 In this era when release dates are announced years in advance (what movie are you most looking forward to in 2020?), it’s really quite refreshing when a studio announces a surprise release. Two recent examples from last year include 10 Cloverfield Lane (Certified Fresh) and Blair Witch (not so Fresh). It’s rare for such a reveal to come from one of the two big comic book franchises, but that’s exactly what we have in the news that Warner Bros is theatrically releasing Teen Titans Go! to the Movies next summer on July 27, 2018. The animated film will be an extension of the popular Teen Titans Go! series on the Cartoon Network, which follows the adventures of Beast Boy, Cyborg, Raven, Robin, and Starfire, and will feature the TV voice cast, as well as Will Arnett and Kristen Bell. Although their voice roles haven’t been confirmed yet, Arnett does voice the LEGO Batman, so that’s one possibility. The other big movie currently scheduled for July 27, 2018 is Mission: Impossible 6.

When director Josh Boone had his breakthrough success with 2014’s teen drama The Fault in Our Stars, it may not have been immediately obvious that his career would turn to horror next. The spooky trailer reveal today (on Friday the 13th, no less) of his X-Men spinoff The New Mutants (4/13/18) indicates that’s exactly what’s happening. As evidenced by this animatic from last year, The New Mutants appears to be at least partly inspired by “The Demon Bear Saga” from 1984. In addition, Boone is also now working on writing (and possibly directing) an adaptation of the 1984 fantasy novel The Talisman, co-written by Stephen King and Peter Straub. Although King is seemingly “in” right now because of the success of IT, The Talisman actually has more in common with recent flop The Dark Tower.

Although animation director Conrad Vernon‘s most recent film was last year’s R-rated comedy Sausage Party (which he codirected), his previous movies are decidedly more “family friendly” (Shrek 2, Monsters vs Aliens, Madagascar 3: Europe’s Most Wanted). It sounds like Vernon will be returning to his roots, as he has signed with MGM to direct their animated adaptation of The Addams Family. The notion of a reboot of the characters created by Charles Addams has been kicking around for many years, including an Illumination Entertainment project announced in 2010 which would have been stop-motion and directed by Tim Burton. Previous adaptations of The Addams Family have included the 1960s live-action TV series, and three feature films in the 1990s.

Although she certainly hasn’t had any problems staying busy recently, Gal Gadot‘s star  has only continued to rise since the success of Wonder Woman. Warner Bros is reportedly hoping to start filming Wonder Woman 2 in the summer of 2018, but Gadot is now in talks for something to film before then. That movie is called Ruin, and it’s described as a thriller in the vein of Inglourious Basterds, centering on “an ex-Nazi captain in post-World War II Germany [seeking] atonement for his crimes by tracking down the surviving members of his former SS Death Squad.” Ruin will be directed by Justin Kurzel, whose filmography had been quite Fresh before last year’s video game adaptation Assassin’s Creed.

4. WILL SMITH AND TOM HOLLAND TO VOICE PIGEON SPIES IN DISGUISE

Like a lot of movie stars nowadays, both Will Smith (Deadshot in DC’s Suicide Squad) and Tom Holland (Marvel’s Spider-Man: Homecoming star) have starred in superhero movies, although for opposite sides of the “Big Two.” In 2019, however, Smith and Holland will be co-starring in a Fox Animation movie called Spies in Disguise (1/18/19), which will be an adaptation of the 2009 animated short film Pigeon: Impossible, which centered on a human spy who has a run-in with a pigeon. It’s unclear what species Smith’s and Holland’s characters will be. Spies in Disguise will be co-directed by Nick Bruno (Epic, The Peanuts Movie) and Troy Quane (Ice Age: Collision Course, Ferdinand). The other movie currently scheduled for January 18, 2019 is M. Night Shyamalan’s Glass, which is a sequel to both Unbreakable and this year’s horror hit Split.

When the Rocky boxing franchise spinoff Creed was a critical and box office success, it was also hailed for being a crucial next step in Hollywood’s move towards more diversity and representation both behind and in front of the cameras. After Creed, director Ryan Coogler moved on to Marvel Studios’ Black Panther (and he will presumably remain busy with the FX-heavy superhero movie well into early 2018). That might just be why we learned this week that the inevitable Creed sequel will not be directed by Coogler again, but by Sylvester Stallone instead. That makes Creed 2 Stallone’s fifth film as director in the Rocky franchise, following Rocky II (73%), Rocky III (63%), Rocky IV (39%), and Rocky Balboa (Certified Fresh at 76%). Michael B. Jordan will reprise his role as Adonis Creed in Creed 2, which will feature Ivan Drago (Dolph Lundgren), the Russian boxer responsible for (30 year old spoiler) the in-ring death of Adonis’ father Apollo in Rocky IV.

Tyler Perry is obviously best known for writing, directing, producing and starring in his series of Madea movies (including next week’s Tyler Perry’s Boo 2!: A Madea Halloween). Perry does, however, occasionally appear in other director’s more dramatic films, such as Alex Cross and Gone Girl. This week, he signed on for a film from a director who has also been more famous for his comedies in the past. Tyler Perry has agreed to co-star as Secretary of State Colin Powell in the director Adam McKay‘s Dick Cheney biopic, which doesn’t have an official title yet (though it might be Backseat). Perry joins a growing ensemble cast that includes Amy Adams (Lynne Cheney), Steve Carell (Donald Rumsfeld), Sam Rockwell (George W. Bush), Bill Pullman (Nelson Rockefeller), and its Dick Cheney, Christian Bale (who has been gaining weight for the role).

There were a lot of box office disappointments this summer, so it’s understandably easy to forget some of them. One example — which arguably suffered from poor scheduling when it opened opposite Christopher Nolan’s Dunkirk — was Valerian and the City of a Thousand Planets, from French action director Luc Besson (Lucy, The Fifth Element). The space opera starring Cara Delevigne and Dane DeHaan earned just $40 million domestically from a budget of $177 million. Besson’s EuropaCorp needs a cheaper hit next, so his next film, which will fall in the $25-$35 million range, will be Anna, featuring a British cast that includes Helen Mirren, Luke Evans, Cillian Murphy, and newcomer (and Russian model) Sasha Luss as the title character. That’s about all we can report right now, as the premise of Anna isn’t yet known, but it will have to be pretty awesome to turn around Besson’s Tomatometer.

2. WALT DISNEY PULLS THE PLUG ON THEIR GIGANTIC JACK AND THE BEANSTALK MOVIE

Until this week, the next three new movies we knew about on Walt Disney Animation’s schedule were two sequels and one original film: Ralph Breaks the Internet: Wreck-It Ralph 2 (11/21/18), Frozen 2 (11/27/19), and Gigantic. That third movie was at one time scheduled for 2018, and then moved to November 25, 2020, but this week, Gigantic was revealed to have been completely shelved. Gigantic was to have been a romantic adaptation of the classic fairy tale “Jack and the Beanstalk,” with Jack being a human adventurer who falls in love with a girl giant. Walt Disney Animation Studios is now developing a different, mystery project for Thanksgiving 2020, but they haven’t announced any details about what it will be (one lingering possibility is a Zootopia sequel). We’re calling this one of the week’s Rotten Ideas because Gigantic had what seemed like a sweet, promising premise as a take on a beloved classic tale.

1. DOZENS OF PLANNED MOVIES IMPACTED BY THE AFTERMATH OF THE HARVEY WEINSTEIN REVELATIONS

If you follow movies or just news in general, you’ve no doubt heard something about (former) Hollywood mogul Harvey Weinstein and the many allegations (still) being made about his behavior over the last 20+ years. To be clear, the real Rotten story here is Weinstein’s inexcusable and potentially criminal behavior, as well as the lasting effects of that behavior on his numerous victims, both personally and professionally. With that said — and not to downplay the real human cost of Weinstein’s transgressions — his departure from The Weinstein Company has also left a number of films (and the people involved) with uncertain futures. First of all, there are the films already produced by TWC, such as the historical biopic The Current War (11/24/17), the children’s film sequel Paddington 2 (1/12/18), The War with Grandpa, The Upside, and the Biblical epic Mary Magdalene. In addition, Lin-Manuel Miranda and his partners on the musical In the Heights now want to pull the film adaptation away from TWC, and Walt Disney Pictures has also removed Weinstein as a producer of their long-in-development children’s adventure Artemis Fowl. Other film development deals left floundering in Weinstein’s wake include Steven Spielberg’s Edgardo Mortara, the Richard Pryor biopic, and the TV series adaptations Knight Rider and The Six Billion Dollar Man.