Sonic 3 and Kung Fu Panda 4 are both on their way, Pac-Man goes live action, and new projects for Emily Blunt, Michelle Yeoh, and Brian Cox.

This week’s Ketchup brings you more headlines from the world of film development news, covering such titles as Sonic the Hedgehog 3, Kung Fu Panda 4, a live-action Pac-Man, and David Leitch’s The Fall Guy. 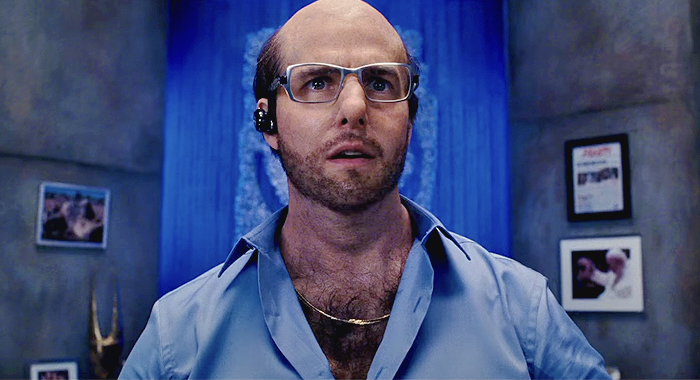 Tom Cruise’s Top Gun: Maverick (Certified Ferrsh at 96%) has now soared over $1.3 billion globally, even as the star has recently filmed Mission: Impossible – Dead Reckoning Part One (7/14/2023), and is now filming that franchise’s eighth film, Mission: Impossible – Dead Reckoning Part Two (6/28/2024). Both of the latter films are being directed by Christopher McQuarrie, who is also working with Cruise on three more projects, all of which McQuarrie is also writing. Tom Cruise will likely be dancing in two of them, as one is a “song and dance” musical with Cruise as the lead, and another is a Les Grossman solo spin-off project. Cruise originated his sleazy studio executive Les Grossman character in 2008’s Tropic Thunder (Certified Fresh at 82%), in which he also showed off his fat suit dance moves. The third upcoming collaboration between McQuarrie and Cruise is described as an action movie with the potential for branching into its own franchise. Also looming in Cruise’s future is the untitled project he will actually film in outer space, in collaboration with NASA and Elon Musk’s SpaceX. None of these four films have release dates, but they’re all likely for 2025 or later.

In the aftermath of Warner Bros. Discovery shelving the already filmed $90 million Batgirl movie, many fans have been left wondering about the the fates of several other DC Comics adaptations. The answer is that it’s “confusing” and varies from film to film. In one category, there are the filmed projects like Black Adam, Shazam! Fury of the Gods, and Aquaman and the Lost Kingdom (not so fast, The Flash), which are all still scheduled to open in theaters. The only new DC Comics picture recently greenlit is Joker: Folie a Deux (10/4/2024) starring Joaquin Phoenix, Lady Gaga, and the recently announced Zazie Beetz from the first film. Development of many DC Comics projects like Zatanna, Static Shock, and Ta-Nehisi Coates’ Superman reboot have slowed down. Two projects that are still expected to progress are the Latino-focused Blue Beetle (8/18/2023) and a solo spin-off for Jurnee Smollett’s Black Canary character from Birds of Prey (Certified Fresh at 79%). There may also be other unannounced film projects as part of the larger 10-year plan for DC Comics movies (such as the sequel to The Batman).

The SEGA video game character Sonic the Hedgehog (Fresh at 63%) has come a long way since his digital design in the first trailer was so mocked by fans that he was totally redesigned (to be closer to the video games). That was followed by Sonic the Hedgehog 2 (Fresh at 69%), which was one of the first box office hits of 2022. Paramount Pictures is apparently sticking to a two year plan, as Sonic the Hedgehog 3 is now scheduled to arrive in theaters as soon as December 20. 2024. It’s unclear which actors will return for the third movie (especially since Jim Carrey has talked about retiring from acting).

3. PAC-MAN TO GOBBLE HIS WAY INTO LIVE ACTION

The success of movies like Pokémon: Detective Pikachu and Sonic the Hedgehog continues to inspire a new wave of video game adaptations. The latest project announced is a live-action adaptation of the hugely popular 1980s Namco arcade hit, Pac-Man. It’s unclear what exactly a live action Pac-Man movie would look like, whether it be a human actor running through a maze or more of a CGI hybrid (which is probably more likely).

When movie fans in 2022 think of Ryan Gosling in a “fun retro adaptation,” they probably think of that image of Gosling as Ken in next year’s Barbie (7/21/2023). There is, however, another such project people might not be aware of yet, which is The Fall Guy, based on the 1980s stuntman TV show starring Lee Majors. The female lead in the TV show was Heather Thomas, and we now know who’s taking her place, because Emily Blunt has joined the project. The Fall Guy will be directed by David Leitch, whose previous films include Atomic Blonde (Certified Fresh at 79%), Deadpool 2 (Certified Fresh at 84%), and this week’s Bullet Train (Rotten at 54%).

5. STEPHEN KING NOVEL THE REGULATORS TO BE ADAPTED FOR THE BIG SCREEN

As an author, Stephen King’s prolific bibliography is almost matched by the number of movies and TV shows that have been adapted from his works. The latest Stephen King novel to start film development is his 1996 book The Regulators. In the novel, life in a quiet suburban neighborhood is disrupted when four vans full of shotgun-wielding “regulators” show up and start shooting people. It’s far too early in development for there to be any casting news for The Regulators.

Earlier this year, it was announced that the Russo Brothers (Avengers: Endgame, The Gray Man) are going to direct Millie Bobby Brown and Chris Evans in a futuristic sci-fi film for Netflix called The Electric State. That project has gone from having two fan favorites to having a legitimate star-studded ensemble as its cast now includes Michelle Yeoh, Jason Alexander, Brian Cox, Jenny Slate, and Stanley Tucci. Millie Bobby Brown will star as an orphaned teenager who sets off an adventure in the American West along with a robot and a mysterious drifter.

In late 2020, Matt Stone and Trey Parker, the creators of South Park, released a series of spoof videos called Sassy Justice which used “deepfake” technology on celebrities like Donald Trump, Michael Caine, and Mark Zuckerberg. At the time, these shorts just seemed like a side project demonstrating the dangers of deepfake technology, but they revealed this week that the videos sprang from something else. As it turns out, Sassy Justice was actually part of a feature film Stone and Parker were producing in early 2020, just as the COVID-19 pandemic slowed everything down. The project relied on “timely” humor (most likely the 2020 presidential election), which is why the film was scrapped.

Dropping late in the afternoon on Friday was the news that Universal Pictures and DreamWorks Animation have set a 2024 release date for a fourth installment in the Kung Fu Panda animated film franchise, which has also spawned three TV series and a number of short films. Jack Black stars in the series as the voice of Po, a bumbling panda who becomes an unlikely martial arts master and unites with a team of skilled warriors to battle evil. Though previous installments have included the voices of stars like Dustin Hoffman, Lucy Liu, Angelina Jolie, Jackie Chan, Seth Rogen, and David Cross, all we know about Kung Fu Panda 4 so far is its release date, so its cast (minus Black, who will likely return to reprise his role as Po), crew, and story are still a mystery.