Plus, Mr. Robot Is the Top Cable Drama of the Summer

Members of the Television Critics Association gathered at the Beverly Hilton Wednesday and Thursday for presentations from the NBC Universal family, featuring their upcoming slate of original programming. NBC and USA Network highlights included plans for Heroes Reborn, Celebrity Apprentice, Colony, and a new Tina Fey comedy. Plus, USA confirms the success of Mr. Robot and NBC sextuples down on Jimmy Fallon as host of The Tonight Show!

TIM KRING CONFIRMS THE DEATH OF A CERTAIN HEROES CHARACTER 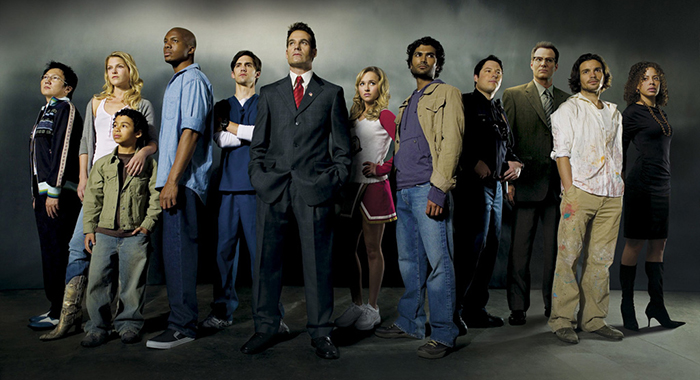 When Heroes Reborn, NBC’s reboot of the popular series Heroes, debuts this September, fans can expect some familiar faces, but not all of the characters will make the five-and-a-half year time leap.

“Some of the actors did not have the availability because they were involved in other things,” Heroes Reborn executive producer Tim Kring told reporters at Thursday’s TCA press session. “The story was really the thing that dictated who would come back,” Kring added, noting that the character of Claire Bennett aka The Cheerleader (Hayden Panettiere) is dead. Claire’s adoptive father, however, Noah Bennet aka H.R.G. (Jack Coleman) will appear in each of the series’ 13 episodes, and will serve as a guide to some of the show’s existing mythology.

Also returning from the original cast in some form or another are Masi Oka as Hiro, Sendhil Ramamurthy as Mohinder, Jimmy Jean-Louis as the Haitian, and Christine Rose as Angela Petrelli. Kring assured reporters that viewers needn’t know the backstory of Heroes to jump into the new version and that the upcoming limited series was written as a self-contained story with “a beginning, a middle, and an end.”

MR. ROBOT IS THE TOP CABLE DRAMA OF THE SUMMER 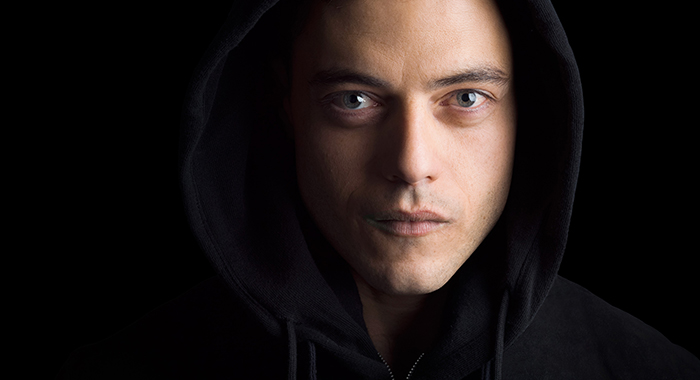 Before it premiered on USA Network, Mr. Robot was already one of the most buzzed-about shows of the summer. It won the Audience Award at SXSW, was the first TV series to be an official selection of the Tribeca Film Festival, and earned a second-season renewal before it even aired in June thanks to the 3 million viewers who sampled the pilot online.The ratings have been equally impressive, with USA head Chris McCumber declaring Mr. Robot the number-one rated new cable drama of the summer.

“On average, it’s getting over 100 percent L3 lifts on a week-by-week basis,” McCumber. “It’s the most viewed basic cable series across the Comcast universe, and it’s a top five series on iTunes.”

McCumber credits the show’s success, in part, because of its timeliness, but thinks that there’s another draw at play.  “We also think there’s a dedicated audience because there’s nothing else like it on television right now,” he said. “It truly is a unique series and USA [is] really, really proud to be the home of Mr. Robot. This series is a perfect example of how USA is evolving our programming direction.”

Season one of Mr. Robot is currently Certified Fresh at 97 percent.

TINA FEY IS HEADING BACK TO NBC WITH A NEW COMEDY 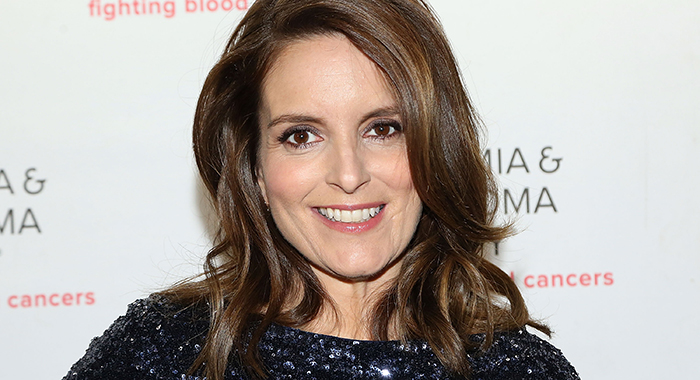 Given the success of Netflix’s Tina Fey comedy Unbreakable Kimmy Schmidt, including a pile of Emmy nominations this year, you might have wondered if NBC regrets dumping the project. Programming chief Bob Greenblatt didn’t exactly cop to regret during Thursday’s executive TCA session, but he did announce a homecoming for Fey, who will producing a new series for the Peacock along with Schmidt’s Robert Carlock, Tracey Wigfield, who Greenblatt referred to as Fey and Carlock’s “protege at 30 Rock,” who also won the Emmy for co-writing the finale with Fey. “Tracy has created a slightly autobiographical, very relateble comedy about an up-and-coming millennial woman, working at a cable news network where her mother happens to get a job after going back into the workplace.”

Greenblatt also announced that Michael Schur (Parks and Recreation) is doing a new series for NBC with the working title A Good Place. “I can tell you that the guy who brought Amy Poehler to primetime is going to be bringing us another strong and very complicated female lead character,” Greenblatt elaborated. “This is a high-concept comedy, like nothing seen before about a woman, wrestling with what it means to be good.” 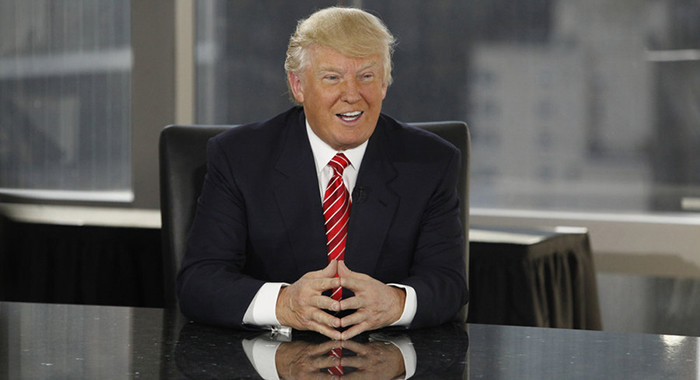 NBC will not be producing new episodes of Celebrity Apprentice with Donald Trump this season, but the series will be back for the 2016-2017 with a new host. “We’ve actually been overwhelmed with a number of really exciting people who have come forward and are interested in taking over the show,” Greenblatt explained. “As soon as we’ve settled on someone, we will get the word out and that will be big news.”

So, will NBC still be in business with Trump — and in particular, will they take his money for campaign advertising? “I don’t even know that we’ve thought beyond the Apprentice or the pageant businesses,” Greenblatt said. “I don’t think somebody who is running for President and might possibly be the leader of the free could be banned from NBC, but we’ll just have to see how this plays out.”

Personally speaking, Greenblatt thought that Trump had been very easy to work with at NBC. “He’s a lovely guy. He was very much a collaborator and worked with us closely on Celebrity Apprentice and is a really effusive great guy. We weren’t in any sort of adversarial position. It was a congenial, really great relationship.”

JIMMY FALLON WILL HOST THE TONIGHT SHOW THROUGH 2021 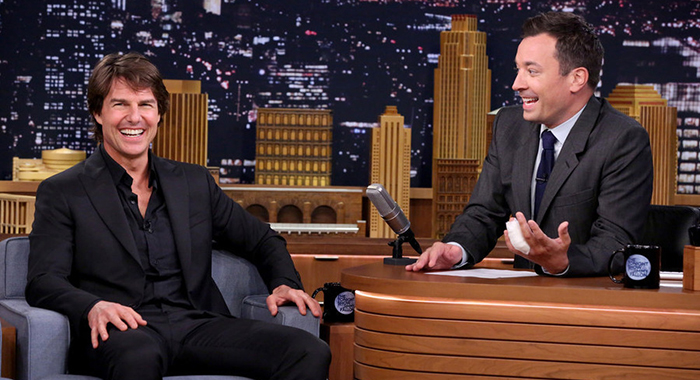 After a year hosting The Tonight Show, Jimmy Fallon is about to host a whole lot more (so we hope you like him). NBC announced Thursday that they have locked Fallon into six more years, signing him on through fall 2021.

“Jimmy Fallon is still simply the best there is,” NBC head Greenblatt told reporters at TCA. “The most personable star of a show anywhere in television.” Greenblatt also expressed happiness over Seth Meyer’s new format, ditching the monologue in favor of going straight to news of the day from his desk.

“This is hit strong suit and we’re happy to see the press and viewers respond so positively to this change,” Greenblatt said. “His show was already on a 20-week ratings high and heading into this, shall I say, crazy election year, I think it only gives Seth more and more momentum.”

COLONY IS NOT AN ALIEN INVASION STORY 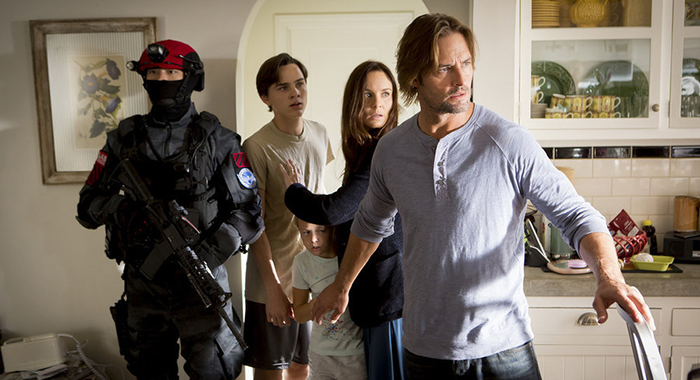 In the new USA Network sci-fi series Colony, starring Lost‘s Josh Holloway and The Walking Dead‘s Sarah Wayne Callies, Los Angeles is captured in the not-so-distant future by aliens. The series, however, begins after the invasion, and explores the story of what happens after the city is taken over.
“The mystery [is] what is this mysterious occupying force, what do they want? What are they doing here?” explained executive producer Carlton Cuse (Lost, The Strain). “They’ve installed this proxy government that’s running the colony and we wanted to make sure we weren’t doing another show that’s in the aliens-versus-humans genre. It’s really about the experience of colonization.”

The writers draw heavily on the Vichy French, who surrendered loyalty to their own people during World War II to collaborate with their enemy.

“We were very influenced by the images of Parisians during Nazi occupation, people in nice clothes drinking espressos as Nazi stormtroopers go by,” Cuse said. “We’re interested in the incongruity of maintaining the order in your life under oppression.”

In Colony, a number of the storylines will involve the characters confronting moral decisions under the occupation in a demarcated L.A., which is split into three major blocks and surrounded by a wall. The series will premiere Thursday, January 14 after WWE Smackdown!