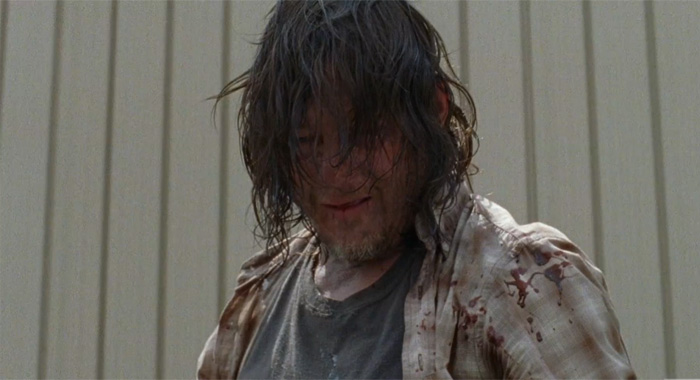 So many stories, so little time. But in a lot of ways, The Walking Dead fall finale wrapped up many of those stories Sunday night and gave fans a satisfying conclusion for the first half of season 7.

SPOILERS AHEAD!
STOP HERE IF YOU HAVEN’T SEEN EPISODE 8, SEASON 7 OF THE WALKING DEAD

The 90-minute “Hearts Still Beating” had viewers on the edge of their seats, because we all knew there would be blood. We just didn’t know whose death would bring tears to Rick’s (Andrew Lincoln) sad blue eyes.

Everything went to hell in a hand basket in 15 seconds flat. #TheWalkingDead @WalkingDead_AMC pic.twitter.com/TbPdKS7jXB

For a minute there, it looked like villainous Negan (Jeffrey Dean Morgan ― who, by the way, won a Critics’ Choice Award for the role on Sunday night) might kill Carl (Chandler Riggs) or Judith (Chloe and Sophia Garcia-Frizzi), because of all the time he spent in Rick’s house casually shaving his beard, making jokes, and cooking up dinner. But ultimately, he seemed to enjoy the awkward tension and the house’s many amenities, and some fans kind of liked Negan’s usurping approach.

Negan is that Uncle who comes over during the Holidays, acts as if he owns the place and overstays but you still love him. #TheWalkingDead

Others wanted Carl to remember that he wanted to kill Negan in the first place and try again. And then there are those who fretted over Carl’s health.

Plan was to kill this fool, consequences be damned. Mofo in the crib COOKIN. Stab him with a spoon! DO SOMETHIN' #TheWalkingDead #DemDeadz

Meanwhile, Spencer (Austin Nichols) tried to ingratiate himself with Negan in Alexandria.

Any time we've see Spencer on screen this season of #TheWalkingDead pic.twitter.com/6xOROGHfkW 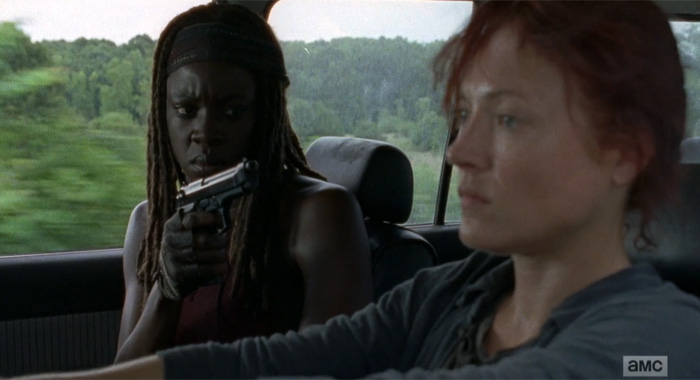 And Michonne (Danai Gurira), on a quest to take down Negan on her own, rode shotgun with a free-range Savior.

With all these storylines unfolding at once, fans seemed most grateful and frightened by the zombies in the lake, especially when it seemed like Aaron might die.

Drowning in a lake full of zombies is my new nightmare, so…thanks for that #TheWalkingDead

Rick and Aaron’s watery adventure reaped a lot of goods to give Negan, but it also introduced a shadowy mystery man who watched the pair as they packed up their truck and split. Yikes! 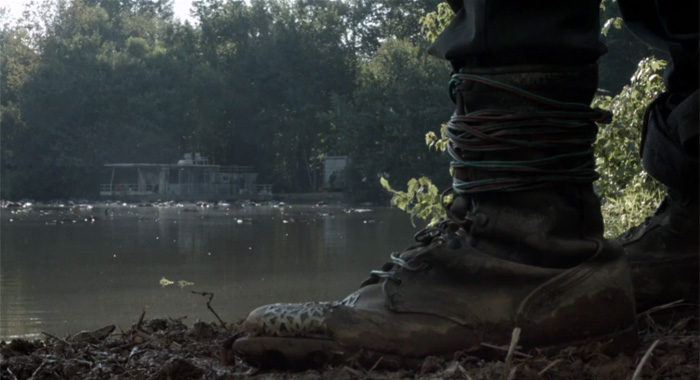 Is this guy with the weird boots a friend or a foe? Guess we’ll find out in February.

More than anything, fans wanted to see what it would take for Rick to be Rick again and fight back. Thankfully, it happened, but it involved a lot of death ― Spencer and Olivia (Ann Mahoney) ― and loss. Negan nabbed Eugene (Josh McDermitt), cut Rosita’s (Christian Serratos) pretty face, and took all of the supplies that Rick, Aaron, and Spencer brought in.

"it's because, you got no guts!" #TWD #TheWalkingDead pic.twitter.com/2nvHJmHO2r

To make matters worse, a couple of Negan’s henchmen beat up Aaron really badly. So by the time Michonne came home ready to get that old loving feeling back with her Sheriff boo, Rick had already decided it was time to fight and Twitter rejoiced.

As for Rosita’s crappy shot, which ended up inside Lucille instead of Negan, and Spencer’s gruesome death ― yeah, fans had thoughts on that scene too.

DAMMIT ROSITA U HAD ONE JOB #TheWalkingDead

I'm still flabbergasted as to how a perfect shot like #Rosita, somehow managed to miss #Negan… from two feet away. C'mon #thewalkingdead. pic.twitter.com/cYYBCYVHAG

Even Spencer’s foray into zombie life turned out to be sad and short-lived, because Rick killed him as soon as he turned. Rick had bigger fish to fry, and when he reunited with Daryl and the gang at the Hilltop, the reunion fired up fans who are ready for the gang to move onward and upward in the second half of season 7 ― and lay some serious hurt on homicidal Negan and his alt-Dead Savior drones.

Oh God it snuck up on me. Daryl & Rick reuniting has me balling my eyes out. #TheWalkingDead

Finally back together #TheWalkingDead pic.twitter.com/KmkmHmCuet

Oh, and Rick got his gun back too! Yay!

Definitely one of the best episodes of the Walking Dead in a long time. And Rick finally has his python back. #TheWalkingDead

@WalkingDead_AMC Finally! Rick has woken up! Bring back #Ricktatorship because they are screwing with the wrong people! #thewalkingdead #twd pic.twitter.com/fn530ZyXxa

the most respected squad in the world #thewalkingdead pic.twitter.com/FYVFuDcgGj

We're putting the band back together. #TWD #TheWalkingDead pic.twitter.com/mhdRo8s3oT

Y'ALL IT'S GONNA BE LIT ?#TheWalkingDead

Me because we have to wait until February for #TheWalkingDead again ? pic.twitter.com/ycohHv07Pl

All I'm saying is I CAN NOT WAIT. #thewalkingdead pic.twitter.com/259tVHEqQ6