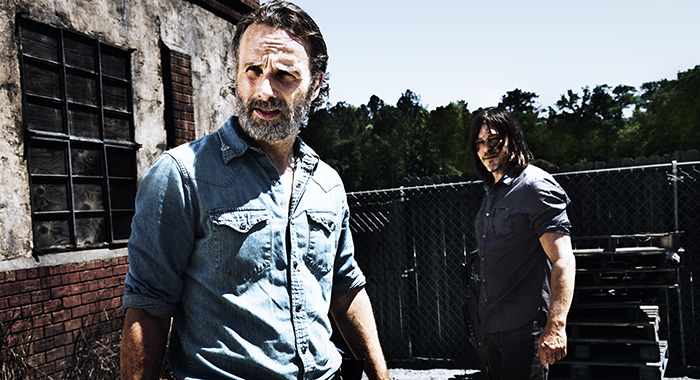 The Walking Dead’s cast and producers took to New York Comic Con last Saturday to give fans a peek at what’s to come in the “all out war” between the camps of Andrew Lincoln’s Rick Grimes and Jeffrey Dean Morgan’s Negan. 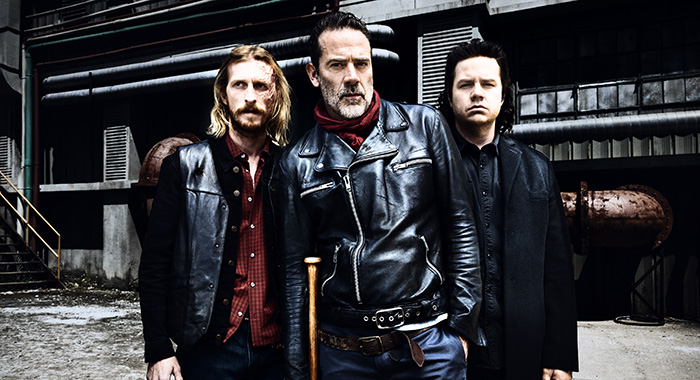 Comic book creator and series executive producer Robert Kirkman dropped the biggest news during the show’s public panel: a crossover episode expected next year between TWD and its Fear the Walking Dead spin-off.

We caught up with cast and crew in the press room to round up nine other must-know takeaways about the new season.

1. The 100th episode will be especially satisfying for longtime fans of the franchise.

If you’re a keen viewer of the entire The Walking Dead series, then you know full well how some scenes and specific shots sear themselves into your memory. Director Greg Nicotero said that this 100th episode is a televisual hour made just for you.

“The first episode has a lot of really interesting nods to previous seasons. If you watch it and you know the show pretty well, you will see things that are direct callbacks to previous episodes, even as much as me shooting, shot for shot, a sequence that was in an earlier episode,” Nicotero said. “We went into it really, No. 1, wanting to give the fans something exciting. People who have been with us since day one can react to the show and feel like they’ve been rewarded by staying with us for a hundred episodes. The new fans, and the new people that are going to watch the show, will get a completely cinematic experience with a tremendous amount of amazing stuff going on. I think we covered it pretty well.”

He did admit, though, that there will be a lot of exposition in this first episode of season 8: “We’re sort of setting the stage for our war.”

2. Those same fans will be surprised by the characters’ evolution. 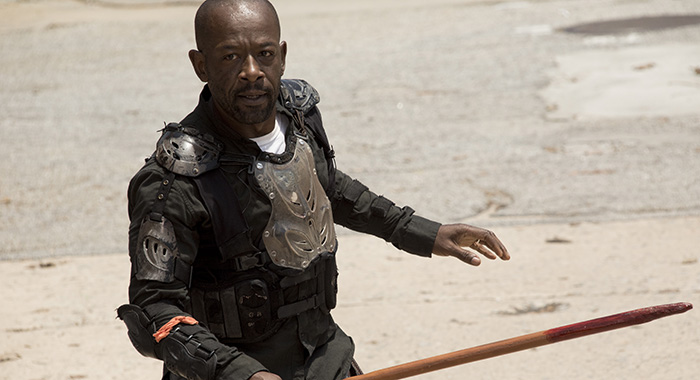 Just as with the direct callbacks to previous seasons and episodes, Lennie James, who plays Morgan in the series, says that season 8 will play especially well to longtime fans because they know where these characters — who have gone through years and years of pain and growth — originally came from.

“I don’t think that any of the characters set out thinking they’re going to be the ones that survive. I think one of the brilliant things about the characterizations in The Walking Dead and one of the brilliant things for us, as actors, is that people have evolved,” he said. “Now that we’re at the 100th episode, if you go back to the first season and look at who those characters were in the beginning, you would not have picked out Carol, for example, as being the one who is most likely to survive, the one that Morgan describes as our greatest warrior. You wouldn’t have picked her out to be that at the beginning, but that’s what she’s become.” 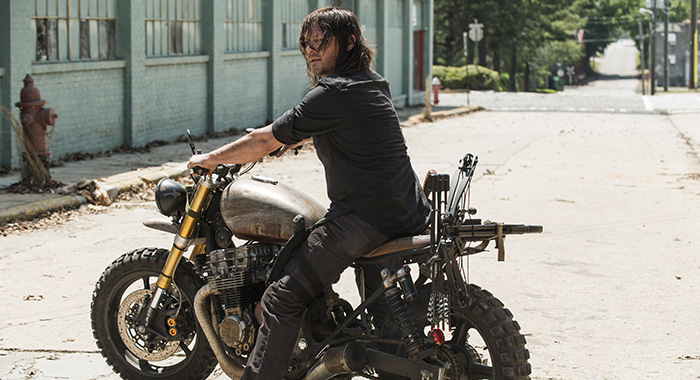 Norman Reedus and his character Daryl have seen everything the The Walking Dead world has to offer, so believe him when he said that season 8 is going to be huge.

“It’s very ambitious. It’s great writing and great acting,” he said. “Every single episode this season is full-on. It’s 100 miles an hour. All the things that you like, this whole seasons packed them all.”

He admitted, however, that that all can get pretty exhausting.

That’s all in part thanks to the technical side of things, headed by Nicotero.

“We really tried to change up the style. We wanted it to be fresh,” Nicotero said. “We had a lot of zoom lenses this year. And there’s not a tremendous number of crane shots. We wanted static, beautiful frames…. We’ve been going for really evocative frames. It adds a lot more coverage; it adds a lot more camera set-ups.”

His goal was to make any given frame worthy of a hanging on the wall. But that means that this season’s episodes were “the hardest…that we’ve ever shot.” And that goes for the storytelling, too.

“This season, [we’ve] been completing a lot of characters’ story lines in one or two episodes instead of letting them play out over the entire season,” he said. “It’s a very different way that we tell stories. Our production design team, visual effects — we’re constantly aware of what we’ve done in the past, and we’re always trying to top ourselves, which is very hard to do. The actors bring it and we have an obligation to continue to up the game for the show because it’s been eight years and we want people to not feel that the show is suffering from any fatigue.”

4. Rick is “stronger than ever before.”

Last season served as a major disappointment for many Rick-loving TWD-heads — and with good reason! No one likes to see their fearless leader become a pacifist for the Saviors. Luckily, Lincoln revealed that Rick is done playing Mr. Nice Guy, and season 8 sees him revitalized and ready to take on Negan.

“A new character took over as lead of the show [last season], pretty much,” Lincoln said. “[But] you’ve got to go somewhere to get somewhere. I think that they needed to break me down in order to come back stronger than ever before. I certainly feel like where we left last season is an indication of absolutely where we’ll go this season. This is the payoff for last season. The thing I love about doing the job — it’s eight years, it’s a hundred episodes — is that they keep pushing and pulling and nursing this man in new and fresh and unimaginable ways. I think [the writers] just enjoy watching me cry.”

Cry, sure, but he’s also willing to die for what he knows is right.

“He’s a man that is willing to die. He’s free,” Lincoln added. “He’s basically, for all intents and purposes, willing to put everything on the line. But I’ll never bow before [Negan] again. It’s basically a polar-opposite Rick that begins this season, and I’m so happy to be playing that man and not the last season’s Rick.”

5. Rick’s arc this season made Lincoln nervous in ways he hadn’t experienced before. 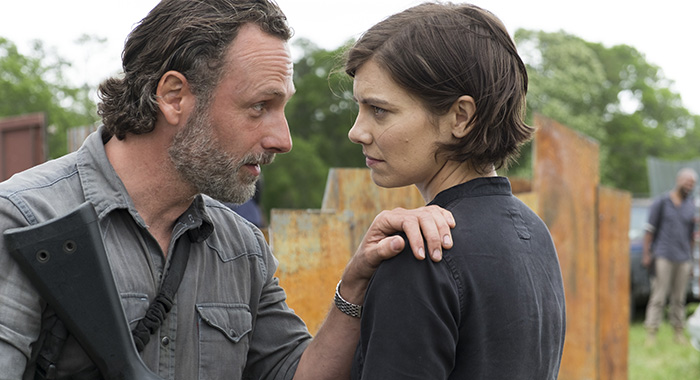 Lincoln praised the series and its writers for creating roles for actors that are like “gold.”

“You get to flex your muscles, you get to not just talk about a procedural drama. You get to deal with big issues of life and death. You get to do exercise, you get to work out as an actor and in a crazy, crazy place,” he said. “The beautiful thing is this season, more than any other, I’ve been really nervous about certain scenes. To be nervous going to work, after eight years, is testament to the writers’ room.”

6. Rick is a man of his word and intends to follow Maggie.

When asked if Rick will be reluctant to give up his position as leader, Lincoln said that “he’s getting tired; he’s been through a lot.”

“He’s not a politician — he’s a general. He’s a sheriff’s deputy, that’s where he comes from; that’s his DNA. That’s probably one of his strengths as a leader, is he listens to people. He takes counsel. He usually ignores it, but he does listen to people. Sometimes that’s why they’ve got through some of the difficult situations they’ve been through.”

When it comes down to it, though, Maggie may prove to be the better leader, politically speaking.

“Maggie is different. [She is] a future political leader, somebody that could run things. She’s industrious, she’s loyal, she’s respected on principal,” he said.

Rick, on the other hand, doesn’t desire power so much as he desires peace.

“He wants peace, he wants the future — because he had a taste of it, and then this goddamned Negan guy showed up,” Lincoln said.

7. Enid may become a new fan-favorite.

Season 8 marks actress Katelyn Nacon’s first outing as a series regular. While members of the press expressed an interest in learning more about her background — Nacon, for one, said that’s a great idea — the main arc for her this season will be about her growth from a teenager to a grown woman.

“When we first saw her, she was kind of like this angsty teenager, kind of closed off, had walls up around her. But now, we’re seeing her become a stronger warrior,” Nacon said. “She’s fighting, she’s trying to implement herself into the community. I’d like, that one day we will learn more about her past, because there’s a lot that we don’t know, there’s a lot that I still don’t really know.”

8. Carol has revenge on her mind going into season 8. 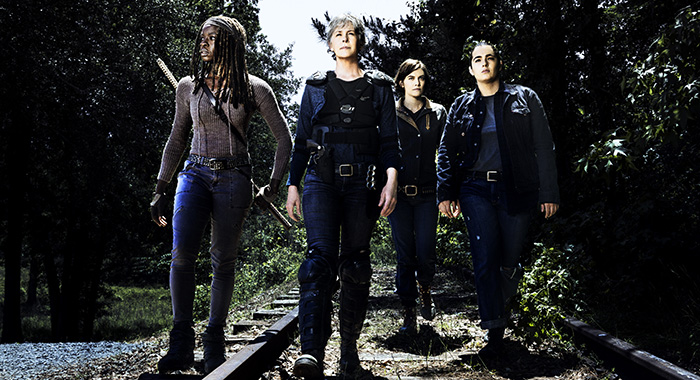 After a full season 7 of Carol (Melissa McBride) struggling with various moral conflicts, she’s now ready for the war Negan brought to her doorstep.

“We’ll see her fight, but she has to. It doesn’t mean she wants to,” McBride told reporters.

Teasing whether or not Carol and Negan will ever share the screen, Morgan quipped: “You could come and make cookies over here anytime.”

9. Kirkman is done with zombies after The Walking Dead. 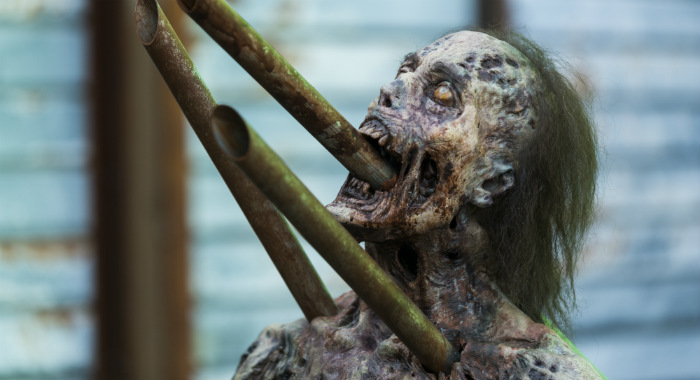 The Walking Dead premieres October 22 at 9 p.m. on AMC.