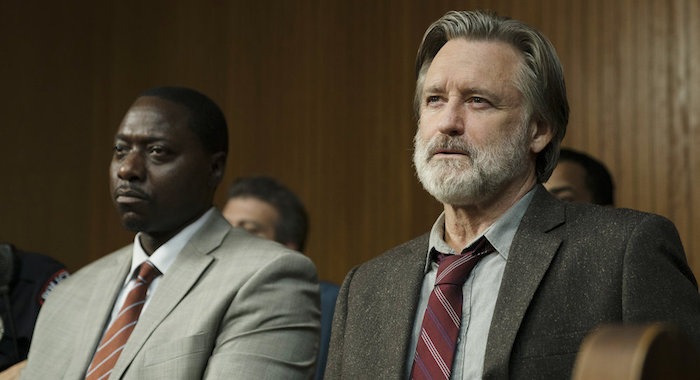 Pullman plays Det. Harry Ambrose, murder suspect Cora Tannetti’s biggest ally. Cora (Jessica Biel) is more than just a suspect, however; a crowded beach full of people saw her kill a man in broad daylight. Ambrose put it together that she has been re-enacting a previous scenario that was perhaps a case of self-defense. The season finale of The Sinner airing next Wednesday will reveal the truth, and perhaps the fate of Ambrose’s marriage, which he can’t solve quite as easily.

The Sinner has been a bit of a sleeper hit this summer. It’s earned a 94% Tomatometer score with 31 reviews since it premiered August 2 and has been Certified Fresh.

Pullman spoke with Rotten Tomatoes during a stopover in Martha’s Vineyard on the way to the Toronto International Film Festival for the premiere of Battle of the Sexes, and the actor has more movies in the works for 2018. 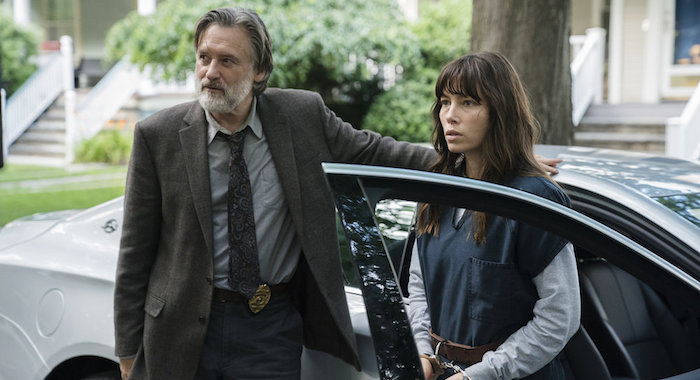 Fred Topel for Rotten Tomatoes: Has The Sinner been a real sleeper hit of the summer for you?

Bill Pullman: My expectations and hope were that it would find a certain audience. Then people might watch it afterwards or whatever, but it’s done much better than I thought. My representatives were saying, “Well, it premiered very well, but we’re used to declining numbers or they might plateau.” Everybody was managing expectations and I thought, “They’re probably optimistic — even so I have to be prepared.” But, it has climbed every week. I could tell by the television agent at ICM how excited he was to call me the day after each screening. I could see all those numbers meant a lot to him.

RT: Have you been aware of the good reviews too?

Pullman: You know, I try to duck out of reading those until it’s all over. I do go back and read some when it’s old news. People have been telling me there are some supporters out there for it. 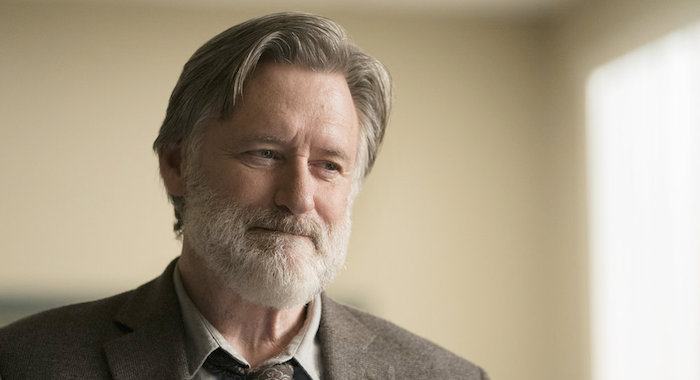 RT: You’ve had a beard in your last few roles. Is this your new look?

Pullman: I just shaved it! I had to say goodbye to the beard because I’m doing two parts and neither of them have a beard. I’m playing Nelson Rockefeller in Cheney, and he never had a beard. Then I’m doing a sequel to The Equalizer, and I didn’t have a beard in the first one.

RT: Why was it the right look for Ambrose in The Sinner?

Pullman: A couple of years ago, this Norwegian theater director had the idea that I should come to Norway and do Othello. I had a beard for that. When I came back, we were doing the sequel to Independence Day and when Roland Emmerich saw pictures of me in my wardrobe with this beard, because I hadn’t shaved it off yet, he said, “I like the beard. We’ll keep it for Whitmore.” Every movie it seemed like everybody said, “Let’s keep the beard. I like the beard.” I was ready for anything with [The Sinner creator] Derek Simonds and Tony Campos who was directing. They saw pictures of me with the beard and said, “You know, this really works for Ambrose.” It was a good run with the beard for two years, about five movies.

RT: If people have read the book, does the finale still have some surprises in store for them?

Pullman: Yes, there are still things they get to be surprised by. The weight and value of things are different too. There are things that can take a long time in the book that don’t so much in our story and vice versa. For one thing, the Ambrose character is not nearly as developed in the book as he is in the show. What he goes through in the last phase is more invented by Derek. 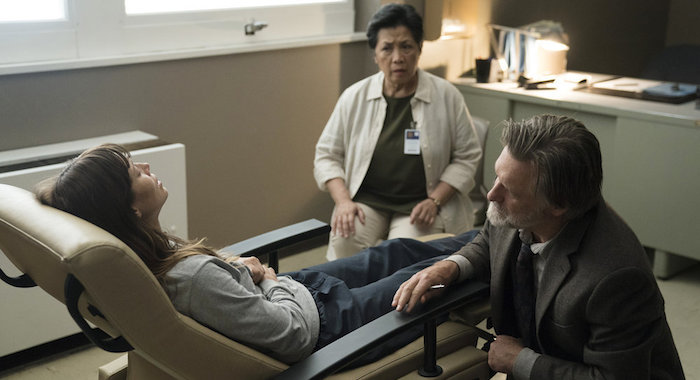 RT: Ambrose was right about the psychological repetition of the stab wounds. Has he gotten too close with Cora by the end?

Pullman: I think it’s the peculiarity of the human mind they’re trying to account for. It’s also a metaphor to repetition patterns that people get into, in ways they don’t recognize consciously. In both characters, in Ambrose and her, what patterns of behavior are we unconscious of? What caused it or what feeds it? Either unconsciously or semi-consciously, I think Ambrose is half aware. It’s more of a fugue state for her, almost pulling back the curtain on a lot of things for her. He’s at least more aware of behavior, at least dimly aware.

RT: Is there a resolution to his marriage?

Pullman: Yeah. I don’t think it’s something you’ll be prepared for. He can’t really sustain it without going through a lot more, at this point in the story. He’s not capable of it. He does everything he can to sustain it but it really is harder than he thought. In a way, his relationship [with Cora] becomes more intimate. There’s a lot more levels of intimacy, not sexuality, but intimacy that he probably hasn’t had for a while with anybody. 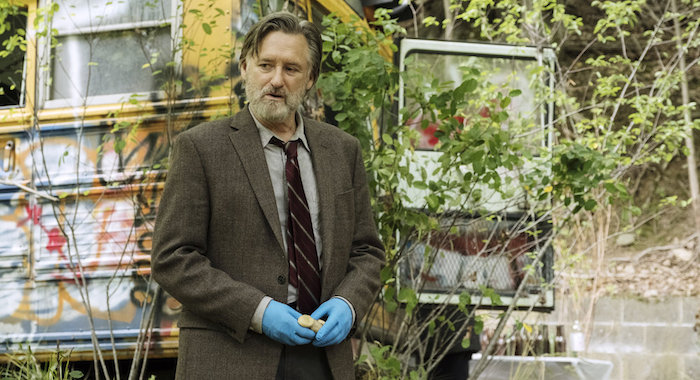 RT: Was it heartbreaking to film the scene where he’s watering his trees?

Pullman: It was so strange that we had the good fortune that it rained that day. There was a point where the first AD, the director, and Derek said, “Are we going to commit to rain? What if it stops raining and we have to keep shooting coverage?” I wasn’t even thinking about [the rain] too much except for the fact that everybody was coming up to me going, “Are you OK?” because I was so soaked. I didn’t want to be [distracted] with keeping warm or drying off or anything. Just keep going. I think the rain added this level of urgency to it all. 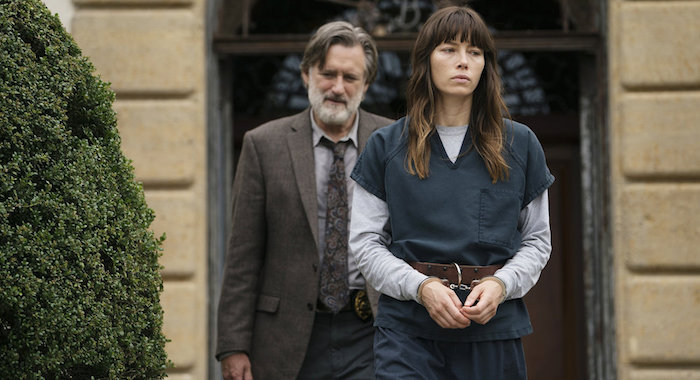 RT: Who do you play in Battle of the Sexes?

Pullman: I get to play Jack Kramer, who is the obstacle to Billie Jean King. He was a true-life guy who was quite a charismatic guy, good tennis player. He’s very important to American tennis. He led the strike at Wimbledon in ’73, when they allowed players to negotiate their own salaries individually for the first time and that made professional tennis playing possible so people could have careers and raise families. But the bridge too far was to get along with Billie Jean King. He believes that women are not as capable as men in playing tennis and that they’re not as resilient. They don’t have the strength and the speed. That makes him a male chauvinist pig, so I’m a good kind of antagonist.

RT: Actors always say you can’t judge your character, but when someone in real life had views like that does it still apply?

Pullman: When they first talked to me about it, I said, “You know, I don’t want to be the guy that’s just stuck in his own age, as a female empowerment movie where we all have the brilliance of our own modern day perspective and everybody else looks like they’re regressive personalities or something.” They were very interested in making it nuanced. I think honestly saying, “This guy is not an overbearing male chauvinist. He was part of a culture that believed this. That doesn’t mean he’s 100-percent bad guy.” All the characters are kind of compromised, but they’re still very human and you don’t ever disengage or give up on them as people.

RT: Do you play tennis in the movie? 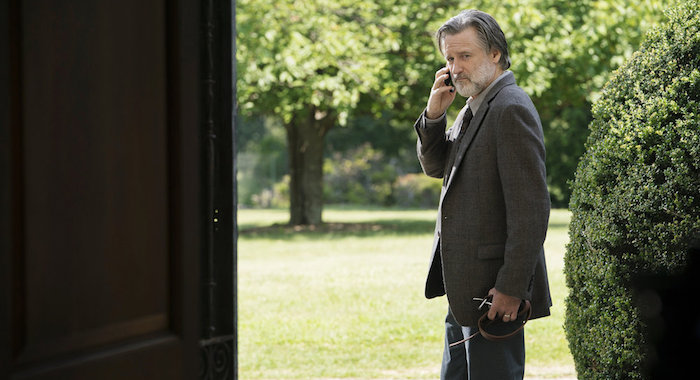 RT: For those who don’t know the historical connection, how was Nelson Rockefeller involved with Dick Cheney?

Pullman: I don’t know if you’re familiar with that whole idea of the Rockefeller Republicans. In the ’60s and early ’70s, the Republican party had a wing that was pro-environment and interested in setting up the EPA, which they did; pro– education and setting up a huge state system, which was largely Republican driven; then they started the NEA for the arts. At a certain point, there was a faction in the party that wanted to go hard right and scorched earth, no compromises with the other party. You’ll see in the movie how it turns out.

RT: Does your character fill the same role in The Equalizer 2?

Pullman: I didn’t know where my character was going. I’m not sure if it’s even resolved. Maybe there’ll be a third one and it’ll go in yet another direction.

The Sinner finale airs Wednesday, September 20 at 10 p.m. on USA. 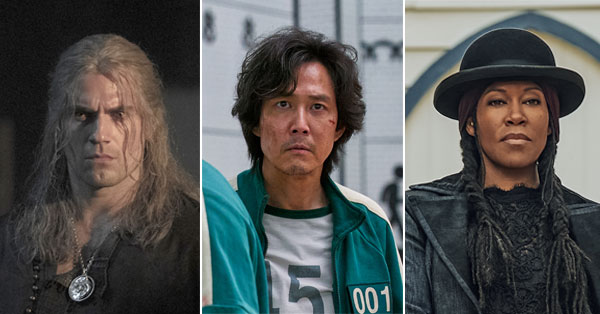 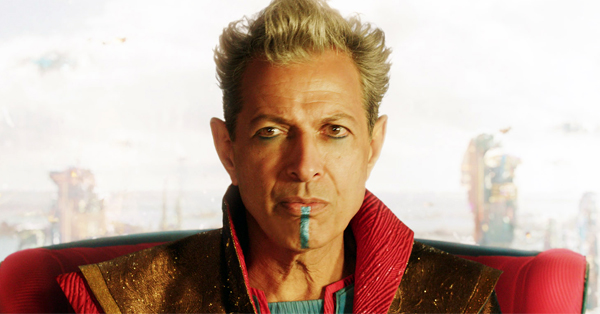