The Shape of Water Buzz: Critics Declare It's One of Guillermo del Toro's Best

Early reviews and social media posts hail it as the director's strongest work since Pan's Labyrinth. 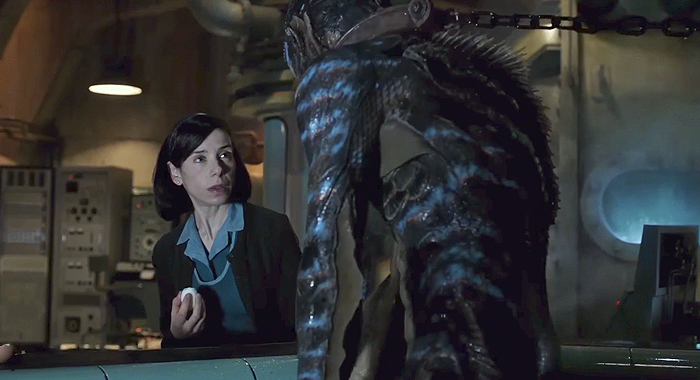 Guillermo del Toro has a new movie on the way, which on its own is very exciting. Plus, the trailer makes it look amazing, sort of like a cross between Hellboy and Pan’s Labyrinth. Well, it’s time to raise your anticipation even further, becauese The Shape of Water just premiered at the Venice Film Festival, and the response from critics is overwhelmingly positive.

The Shape of Water stars Sally Hawkins, Octavia Spencer, and frequent del Toro collaborator Doug Jones in a Cold War-set fairy tale of sorts, about a lonely woman who forms an unlikely new bond when she and a co-worker discover a secret experiment in the top secret lab where they work. Del Toro has been up and down with critical favor throughout his career, but more than half of his features as a director are Certified Fresh on Rotten Tomatoes, and his average review score is 77.8%. Currently, The Shape of Water has a unanimously favorable 100% score right out of the gate, and we can assume it will remain one of his higher-rated efforts.

Here’s what critics are saying in reviews and on social media:

A visually and emotionally ravishing fantasy that should find a welcome embrace from audiences starved for imaginative escape…del Toro’s most satisfying work since Pan’s Labyrinth.
– David Rooney, The Hollywood Reporter

For first half-hour or so, I thought The Shape of Water might be an all-timer. It’s not, but by far Gullermo del Toro’s best since Pan’s Labyrinth. Richard Jenkins is particularly fantastic.
– Paul O’Callaghan, Sight and Sound

I expected lots from The Shape of Water, but not for it to be, among other things, a musical. Surprising and delightful.
– Jill Lawless, Associated Press

There are elements of Beauty and the Beast, E.T., Amelie and The Creature from the Black Lagoon at play…something here for lovers of all kinds of movies — even silents and musicals.
– Alonso Duralde, The Wrap

An immense achievement…this is del Toro’s Beauty and the Beast with the delicate time period touches and social awareness of Far from Heaven.
– Brian Formo, Collider

Guillermo del Toro channels all the streams that make him unique into The Shape Of Water, pouring his heart, soul and considerable craft into an exquisite creature fable.
– Fionnuala Halligan, Screen International

Not only is The Shape of Water one of del Toro’s most stunningly successful works, it’s also a powerful vision of a creative master feeling totally, joyously free.
– Ben Croll, IndieWire

Like the best bath you’ve ever had, it sends tingles coursing through every part of you that other films don’t reach.
– Robbie Collin, Daily Telegraph

The Shape of Water opens in theaters on December 8.