The writer and co-director of Netflix's stop-motion animated film talks about capturing real-life moments in animation, using war as a backdrop for his films, and the challenges of songwriting. 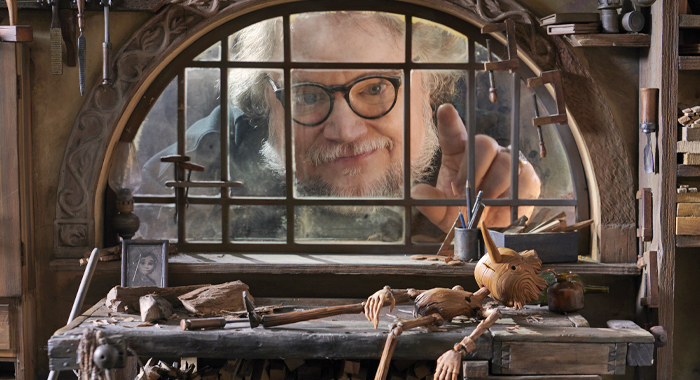 Guillermo del Toro‘s singular filmmaking style makes each of his projects feel both unique and familiar at the same time, whether it’s a giant blockbuster about robots fighting monsters, an Edwardian gothic romance, a dark fantasy set in fascist Spain, or a stop-motion reimagining of a classic children’s story.

After more than 15 years, del Toro is finally making his feature directorial debut in animation with Pinocchio. Based on Carlo Collodi’s The Adventures of Pinocchio, this take on the story is set in 1930s fascist Italy and places a bigger focus on Pinocchio’s relationship with his father Geppetto and his struggles with expectations than we’ve seen in other adaptations.

It is a beautifully animated film with character acting more detailed and nuanced than we normally see in Western animation and a finale that won’t leave a dry eye in the house. The film also boasts a star-studded voice cast that includes Ewan McGregor, David Bradley, Cate Blanchett, Tim Blake Nelson, Christoph Waltz, Tilda Swinton, and more.

Rotten Tomatoes met the Oscar-winning writer-director over Zoom to discuss his approach to animated acting, writing Mussolini as a character, and writing lyrics to musical numbers. 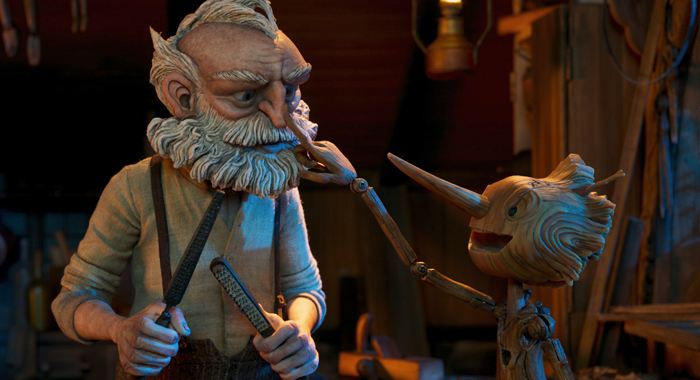 Rafael Motamayor for Rotten Tomatoes: You’ve talked about wanting the animators to have more agency over the characters’ performances, but how does that translate to the practical day-to-day of production? Where do your directions end and the animators’ improvisations begin?

Guillermo del Toro: In my movies, the camera never is on a tripod or static. In animation, I have to have some static shots, because with so many units shooting at the same time, we can’t have motion controls on all of them. I think animation sometimes is over-animated, both in the characters and the camera — it has sort of a sitcom-y rhythm. And we wanted to be very punctual with the gestures, almost like neurolinguistic programming — you know, little input, eye shaves, looking away, not looking at each other when the characters are talking, we dictated very punctually.

And then we said to the animators, “Look, this is what we want, but if you find something with the puppet during the course of the shoot—” because this is very much like live action, the shot is happening as they go along. And we said, “If you find a gesture or something you want to try, try it.” What this means is that whoever is giving them instruction has to be involved with production, because you’re gonna have to respond about giving somebody a day or two or three for an unnecessary gesture. If somebody’s gonna do an improv, a one-and-a-half-second movement, it could take as much as two or three days, and that’s money. That’s animator time, studio rental. And we wanted that that leeway to evoke sort of the expressiveness and quiet moments that you get in live-action, where you are watching an actor think or emote.

We dictated failed gestures like trying to close a door and having to do it two times, and some of the animators would do it on their own. My favorite that I saw, and it was a surprise, was Geppetto in the scene in the church, and he sits a little far away from the box with his paint, and he scooches over and then he goes for the box and he notices that a paint jar is open, tightens a lid, and then closes it. And that was a complete surprise. Neither Mark [Gustafson, co-director] nor I dictated that one. 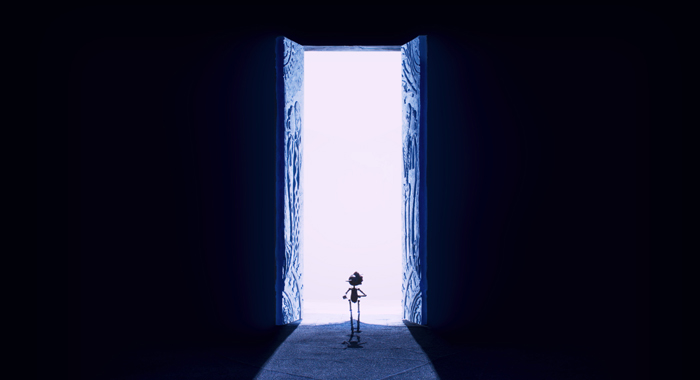 RT: One thing that was surprising and special about this take on the story is that you make Pinocchio explicitly immortal, and we see him die over and over again. Why was this important to you?

Del Toro: I love the idea of having a dialogue with things that are superior to you, like destiny or death or fate or God or an angel. And I thought it would be really nice to have the most innocent or the purest creatures, somebody like Pinocchio, who doesn’t remember who he is, but Death recognizes that the soul is Carlo’s soul, and knows her sister [the Wood Sprite] did it.

I love the idea of life being very generous, but in a haphazard way. And the life-giving entity just gives without thinking of the consequences, and death is very thoughtful. Death, more than anybody else, more than Geppetto or cricket, teaches Pinocchio to be a human being, and shows him that his lack of a real human lifespan doesn’t make him human. She gives him a choice, and this is very similar to Pan’s Labyrinth, where every decision is what makes it clear that Ophelia is a princess; her decisions are tests. 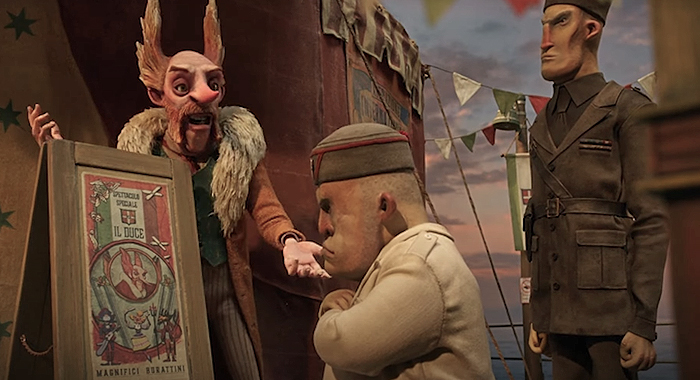 RT: Despite having some serious and complex themes, the film is also filled with humor. I particularly liked your portrayal of Mussolini. What inspired it?

Del Toro: Cartoons and politics go hand in hand, throughout history. There have always been cartoonists satirizing, editorializing, and diminishing the fact that most people that yield or wield power are very, very ridiculous people. And we thought it was interesting to have this country be in the hands of this ridiculously pompous tiny character, but if any recent events in our own history are to be taken as a model, we can all be governed by very ridiculous characters.

The other idea was the war in the movie, much like I did in The Devil’s Backbone. I like the war to exist in the horizon, in the periphery, but affect the lives of everybody. You know, in Devil’s Backbone, I wanted the war never to be near the orphanage, but all the dynamics of that war — death, jealousy, rebellion, pride, anger — all that is at play in the orphanage. The same thing happens in Pinocchio. We are never in a battlefield, but we got to the equivalent of Pleasure Island, which is the youth reeducation camp. You see the boys enjoying playing at war, and then it gets serious. Fascism was of a piece with the rest of the father and son stories. Fascism is an obsession of sorts with a paternal figure, a very corrosive paternal figure. It’s about weaving in and never letting it take center stage. It has to be balanced with the story of the fascist bureaucrat and the son, and Volpe and Spazzatura, and Pinocchio and Geppetto, and Geppetto and Carlo.

RT: Is that part of why you place dogs in the background during certain scenes? To show the effects of the war?

Del Toro: Yes. If you count the legs of the dogs, the first dog that appears in the school fountain is missing a leg, meaning that dog went to war. And then, the next time you go through the town, you see dogs and soldiers. So it’s a little bit like having characters that are not human indicating a little bit of the consequences of the war, or reminding you of that, and we wanted to do it early. Then the last dog appears when Pinocchio is going to the tent and Spazzatura is being beaten up by Volpe. I would ask for them very punctually; I said, “Put a dog here on the right,” or “Put two dogs here in the alley.” We had the dogs made in Guadalajara because we didn’t have any puppeteers that could make them, so they shipped the dogs from Mexico. 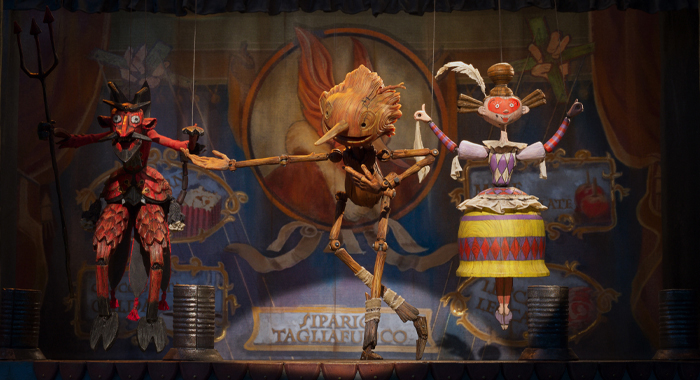 RT: This is also your first musical, but the songs don’t feel like traditional animated musical numbers. How was the experience of writing song lyrics?

Del Toro: Well, the first time we talked about making the movie, we talked to Nick Cave. This is when Gris Grimly was going to direct it. It was a very different screenplay, but with the same story points arranged completely differently. And it was really a great idea, I thought, for Nick Cave. Then when I took over the project, after we got turned down by every studio with the first incarnation, I went to Beck, but again, it became really hard to schedule the meetings. Eventually I said to Alexandre [Desplat], “Why don’t I take a crack at the lullaby, and maybe it will work.” So I wrote the lyrics to “My Son” alone. And Alexandre was very enthusiastic and very encouraging and told me to take a stab at all the songs, and I did, then Alexandre said “You need help. You’re not a lyricist.” But it helped that the basic ideas, like the words “Ciao papa, now I’m gone, I don’t know when I’ll come back,” even if they were not great lyrics, the idea of the lyrics is still there.

And then [Roeban] Katz, who had worked with Alexandre on a hit summer song Alexandre wrote in the ’80s called “Mon bateau” — they got together and Katz really shaped the lyrics, and they preserved some of my little figures. But other than “My Son” and the song that the rabbits sing, which I wrote with Patrick McHale, Katz and Alexandre did a good deal of the heavy lifting. But it’s great to hear some of the phrases on “Ciao Papa.” I don’t expect to be releasing an album any time soon.

RT: Lastly, I’m curious, did you get to keep any of the puppets used in the film?

Del Toro: Yes. Every movie I make, I have a clause that says that I can choose as many props as I want. I’m keeping a full set of the main puppets. The problem is, I don’t know, they’re gonna end up in the kitchen because I have no more space!