The Mandalorian: A Desperate Search for Grogu Heats Up in Chapter 15

Have you seen this Child? Frantic to find his little, green ward, Din Djarin faces an enemy force with the help of some friends in the latest episode of the Star Wars series.

As The Mandalorian nears the end of its second season, Din Djarin (Pedro Pascal) must make a difficult choice in his attempt to rescue Grogu. In doing so, he also offers an unlikely opportunity for a former foe. While not as focused on the larger universe as recent episodes, this week once again proved The Mandalorian is more than capable of telling its own tales on its own terms.

So let’s dive into Chapter 15: “The Believer” and discover why writer/director Rick Famuyiwa is overdo for his own Star Wars story.

The following contains spoilers about The Mandalorian, season 2, episode 7, “Chapter 15: The Believer.” Stop here if you have not watched the episode. 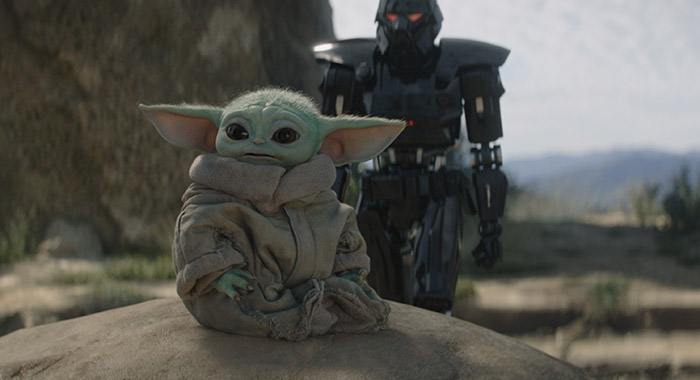 Arriving on Tython so Grogu can use Jedi temple ruins to contact a Jedi willing to train him, Djarin encountered Boba Fett (Temuera Morrison) and Fennec Shand (Ming-Na Wen). Fett’s main concern is the recovery of the armor Djarin took from Cobb Vanth (Timothy Olyphant) and offered to protect the child in exchange for it. Sadly, Fett and Shand’s help was not enough to prevent the Imperial Remnant from abducting Grogu. Djarin quickly formed a plan to save him, but it requires the assistance of former Imperial sharpshooter, Mayfeld (Bill Burr). 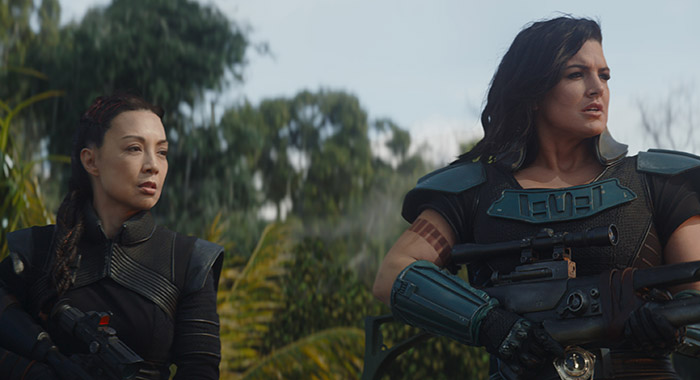 Instead of the prison break last week’s episode appeared to tease, Cara Dune (Gina Carano) uses her authority as a New Republic Marshal to secure Mayfeld’s release into her custody.

As part of Djarin’s plan, Mayfeld needs to use his knowledge of Imperial codes and procedures to ascertain the coordinates of Moff Gideon’s (Giancarlo Esposito) light cruiser. Once he hears Grogu’s life is in the balance, Mayfeld agrees to assist. Needing direct access to an Imperial terminal, he suggests setting course for the secret mining operation on Morak.

Once on the planet, Hess and Djarin disguise themselves as Shoretroopers to infiltrate a refinery for highly-volatile mineral rhydonium. When attempting to access an Imperial network in the mess hall with the terminal, Mayfeld backs out after noting Valin Hess (Richard Brake) among the officers. The two have history. Desperate to find Grogu, Djarin removes his helmet so the terminal can complete a facial scan. Unfortunately, all of their mucking about attracts the attention of Hess, but the Imperial officer only wants to congratulate them, as they were the only transport team to make it back to base. Things turn sour when Mayfeld darkly reminisces about the Burnin Konn engagement of Operation: Cinder, a mission which led to the deaths of roughly 10,000 troopers. When Hess dismisses the losses, Mayfeld shoots him.

The resulting firefight leads to Hess and Djarin’s escape, thanks to timely assists by Dune, Shand, and Fett. Djarin recovers his armor and Dune decides to let Mayfeld go after seeing him hit one of the rhydonium transports from the Slave I hatch and blowing up the entire Imperial base. 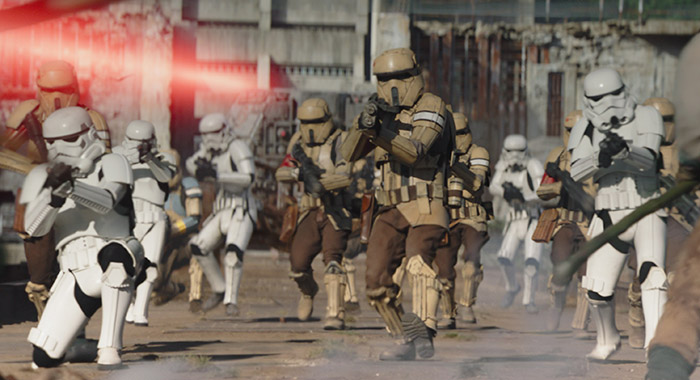 Mayfeld’s reappearance here is a surprising change from his more villainous debut last season in Chapter 6, “The Prisoner” — also directed by Famuyiwa. It is, nevertheless, a welcome change as Mayfeld shows a hidden depth under his quips. Concern for the loss of life is not a quality the Empire or the Remnant values, and this growing concern was clearly a key reason Mayfeld walked away from the Imps after Burnin Konn.

As it happens, Operation: Cinder was part of Sheev Palaptine’s contingency plan to cripple the galaxy — Rebels and Imperials alike — should he ever perish. While on its face, it was meant to bring ecological devastation to world like Naboo and Burnin Konn, the high casualty counts were also part of the design. It is doubtful Hess or Mayfeld knew the real reasons for the operation, though, or the other aspects of Palpatine’s plan, the retreat of certain Imperial forces to the Unknown Regions.

Nevertheless, their reactions here illustrates a distinct difference in character. Hess is a true believer in the Empire’s definition of “order,” while Mayfeld was probably a conditional Imp at best. As seen in Solo: A Star Wars Story and intimated by Luke Skywalker’s desire to leave Tatooine, people joined the Imperial military because they are out of options. Typically, the training crushes a person’s spirit and turns them into loyal goons like Hess, but sometimes a moral center survives.

It is clearly the point of Famuyiwa’s script as Mayfeld proved to be more honorable than the other characters he introduced in Chapter 6: “The Prisoner.” It also suggests Famuyiwa has a longer-form Star Wars story of his own to tell. His directorial debut in the galaxy, Chapter 2: “The Child,” was a fabulous self-contained adventure seemingly inspired by the simple question “What if Boba Fett fought Jawas?” Chapter 6, his debut as a writer (with Christopher Yost), continued with the seemingly one-off stories, while introducing a compelling set of miscreants, Mayfeld included. While it is possible he will stay on Morak to help the indigenous population fend off Imps and pirates — a worthy conclusion to his tale — it is also possible Famuyiwa has found a way to highlight the struggles of more common people caught between the never-ending conflicts in the galaxy.

And with Star Wars expanding its television footprint to 19 series(!) in the next few years, we have to wonder if Famuyiwa will apply his craft to, say, Rangers of the New Republic. He is a great a filmmaker, and it’s clear he can do great things in the Star Wars format, so we think it is time to set him loose on a series or a feature film. He is more than capable.

Although, considering Dune declared Mayfeld dead while letting him go, we also have to wonder if he will have to dodge those Rangers in the upcoming series or befriend them. 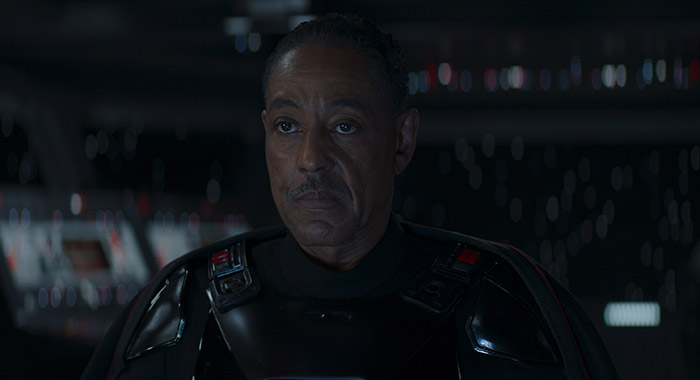 While we ponder Mayfeld’s future in New Republic space, we also have to consider the Remnant’s place in all of this.

Is Another Operation: Cinder Afoot? While Palpatine’s contingency plans were meant to cripple the Remnant and the New Republic in short order, both factions endured. Is the chaos Hess said would soon happen part of another contingency? The forces that will become the First Order and the Final Order are already ensconced in the Unknown Regions by this point, so sacrificing more Imps to hobble the New Republic feels on-point for the Sith Lord. Provided he’s still issuing commands in his bizarre afterlife, of course.

What Is The Remnant’s Command Structure? Expanding on a question we’ve asked before, it is still unclear if these Imperial Remnant enclaves are working in concert or independently of one another. In the Star Wars: Battlefield II campaign, directives regarding Operation: Cinder and other aspects of Palpatine’s contingency are delivered to high ranking Imps via prerecorded holo-messages from the Emperor himself. The secrecy involved suggests Palpatine may have encouraged Remnant forces to splinter as part of the plan to cripple anyone not in the Unknown Regions. At the same time, it is possible Gideon united the factions into one organized Remnant. But even if that is the case, it still leaves us to wonder if Gideon is working at Palpatine’s behest or for his own ambitions.

How Strong Is the ISB? The Imperial Security Bureau definitely gives our heroes pause, but its strength only seems to extend to Remnant controlled zones or specific operations directed by Gideon, himself a former ISB operative. Is the ISB a credible threat? If so, why did the ISB lose track of Djarin and Grogu following the events on Nevarro last season?

Why Did the Terminal Recognize Djarin’s Face? From Mayfeld’s explanation of the terminal system, we expected the facial scan to be another layer of the verification process. If that is true, why did it recognize Djarin’s face? The simplest explanation, of course, is that the scan is just a simple logging system instead of a security function. Which may mean Gideon will use the record of the Mandalorian’s face against him.

Will Djarin Really Carry On Under the Helmet? Although all the Imps who saw his face are dead and Mayfeld choose to ignore what he saw, we can’t help but wonder how Djarin can continue to wear the armor after being seen. On the one hand, he’s seen plenty of Mandos this season who do not live by the Way of the Mandalore. On the other, he’s still a religious zealot who has yet to reconcile the Way with the evidence of his own eyes. Perhaps, like Mayfeld said, Djarin will do what he must to get Grogu back and, after retrieving him, will leave the armor with Boba Fett; in fact, that feels like the right note to end the season on. We’ll know soon enough, though, as next week is the season finale.

The Mandalorian streams on Disney+.