The Last of Us Episode 2: A Major Character's Death Gets a Disturbing Makeover

The series' dedication to the game remains, while also breathing more life – and death – into the infection's backstory.

A few minutes into The Last of Us’ premiere — when Joel and Sarah’s biggest problem is locating the lost pancake mix — they catch part of a radio broadcast over breakfast. The reporter talks of some unexplained “disturbance” unfolding in Jakarta, Indonesia. We, of course, know what’s coming, but the series’ second episode still packs plenty of surprises for both fans of the game and franchise newcomers.

Speaking of the series’ audience, episode 2 pulled in 5.7 million viewers on Sunday night, a 22% increase from the series debut, marking the largest week 2 growth for an HBO Original drama series in the history of the network. And a week since its debut, episode 1 is reportedly tracking at 18 million viewers, four times its premiere night audience. With that, the video game adaptation is on track to be one of the best-performing shows of 2023.

Last week, we examined the premiere’s faithfulness to the game franchise. Let’s have a look at how the series did in episode 2, “Infected,” which has a 92% Tomatometer score so far.

Spoiler alert: The following contains details about The Last of Us season 2, episode 2, “Infected.” Stop here if you have not watched the episode. 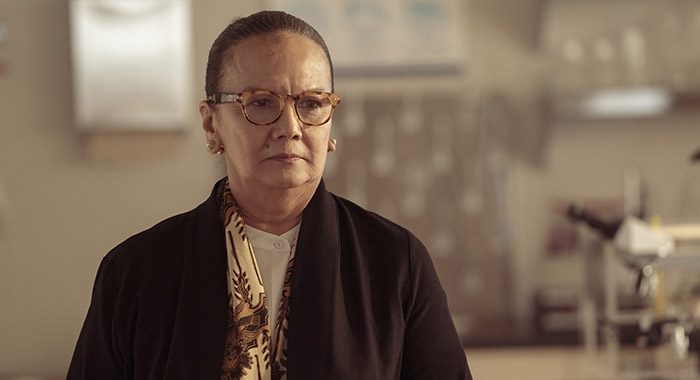 The episode opens in Jakarta, where the disturbance is given some terrifying context. A female professor of Mycology (Christine Hakim) is hastily escorted from her lunch to examine a body infected by the Cordyceps virus. Using a pair forceps, she carefully fishes a tangle of snaking tendrils from the victim’s mouth. More chilling than that discovery is her professional recommendation to the military officer seeking her help: “Bomb this city — and everyone in it.”

Like last week’s talk show prologue, this scene departs from the game’s narrative path to dive deeper into the science behind the virus. At this point in most zombie apocalypse stories, an outbreak’s origins have been abandoned in favor of fully focusing on the monster-slaying aftermath. The Last of Us, however, continues to set-up its apocalypse and scare us with its too-close-to-home pandemic.

When we return to Boston, where Joel (Pedro Pascal), Ellie (Bella Ramsey), and Tess (Anna Torv) are continuing their trek to the state house, we get another frightening peek into what went down immediately after all hell broke loose. Tess explains to a curious Ellie that the massive craters all over the city are the result of bombings ordered to slow the spread of the virus. We also learn Ellie was bit when exploring an old, boarded-up mall in the quarantine zone. 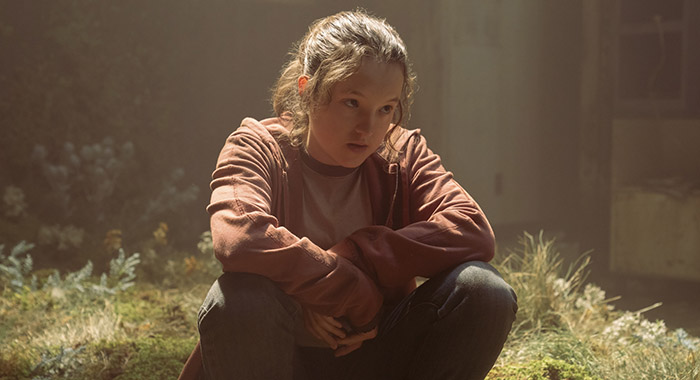 Of course, all these extra story bits are peppered with plenty of Easter eggs and call-outs to the source material. When faced with a flooded hotel lobby, for example, Ellie reveals to Joel and Tess she can’t swim. Fans who braved the game will recall this fact lead to them finding creative ways to ferry her across its soggier sections. These same fans will also appreciate the episode’s fantastic, game-mirroring shot of Ellie crossing a plank between buildings, with a bombed-to-hell Boston serving as a scary/stunning backdrop.

But before that familiar scene unfolds, we’re treated to more fresh intel on the virus. While looking at a sea of seemingly sleeping infected lying in the street, Tess tells Ellie how they’re all connected. The first episode established that the game’s airborne spores have been swapped for sickness-spreading tendrils. But more than just transferring the infection to new hosts – and looking absolutely terrifying in the process – these spidery appendages apparently serve as a creepy communication network. The tendrils commune underground, forming a sort of hive mind entity that somehow makes the show’s infected even scarier than the game’s fungal freaks. 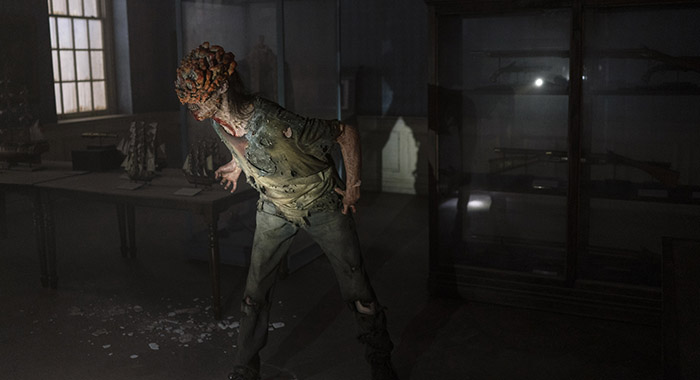 While episode 2, aptly titled “Infected,” strays from the game’s action and storytelling to teach us more about the Cordyceps virus and its origins, it’s not all talky exposition. On the contrary, its extended scene in a Boston history museum should have existing fans instinctively reaching for their PlayStation controllers. We’re introduced to “Clickers,” infected whose heads have gone full fungal, blinding them and leaving them reliant on echolocation to hunt their victims. The heart-pounding scene is similar to the game’s encounter, save for the fact the show doesn’t allow us to eliminate the ugly threats with the squeeze of a gamepad trigger. That said, it’s brilliantly realized here, delivering the sort of scary, pulse-quickening sequence that’ll inconveniently resurface in your mind just as you’re trying to fall asleep at night.

The episode continues to prey on our fragile psyches in its final scene, one that slightly alters an early bombshell reveal from the game. When the trio of survivors finally reach the state house, they’re not greeted by the Firefly group they’re expecting, but a room full of corpses. But it gets worse. Much worse. Tess reveals she was bitten back at the museum. In the game, she stays behind, sacrificing herself so Joel and Ellie can get a head-start from the pursuing FEDRA military.

Tess pulls the same selfless act in the series, but now it’s aggressive infected knocking at the door — having been alerted by the sound of Joel’s gun — rather than human threats. This plot tweak allows the series to showcase that aforementioned hive-mind coordination, as well as set up a far more disturbing demise for Tess.

After begging a reluctant Joel to continue the journey without her, and get Ellie to safety, Tess covers the floor in gasoline and grenades. But while struggling to ignite the trap, she’s subjected to an open-mouth “kiss” by one of the infected. While being force-fed a maw full of tendrils, she’s finally able to blow up the building.

Joel and Ellie watch the explosion from a safe distance before sorrowfully continuing on without her.