The series sticks close to the game's storytelling, while ratcheting up some of its emotional beats and, er, fleshing out the origins of its zombie-like infection.

You needn’t look further than your favorite social media platform to see The Last of Us – HBO’s new video game-based post-apocalyptic drama – is having a moment. This fact is further cemented by the show’s near-perfect Tomatometer score.

But while the series has clearly struck a chord with streamers and critics, how does it compare to the acclaimed game it’s adapted from? And, does its debut episode, dubbed “When You’re Lost in the Darkness,” suggest the show will offer a fresh take on the crowded, decaying corpse genre? Let’s peel back the premiere’s rotting flesh and find out.

Spoiler alert: The following contains details about The Last of Us season 1, episode 1, “When You’re Lost in the Darkness.” Stop here if you have not watched the episode. 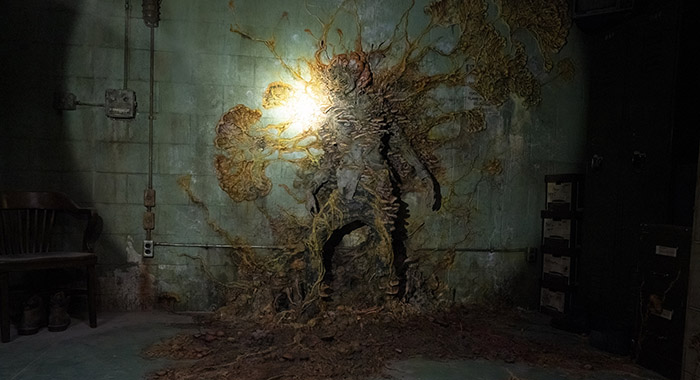 Developer Naughty Dog’s The Last of Us offered a slightly different spin on the undead apocalypse, trading your standard brain-craving monsters for mutated humans consumed by the cordyceps virus. While the game opens in 2013, on the day of the outbreak, the series goes all the way back to the ’60s to help set up this not-zombie infection.

During a talk show, scientists discuss pandemic threats and debate over the likelihood of a fungal outbreak. The audience initially scoffs at the idea of a mushrooms uprising, but one of the show’s guests offers a sobering scenario. Upon eerily explaining how some fungi “seek not to kill, but to control,” he goes on to describe how this has already been proven in insects – specifically ants, which the aggressive fungus controls like a puppet. Another scientist counters, saying this would be impossible in humans due to their increased body temperature.

But before the talk show cuts to a commercial, and The Last of Us rolls its opening credits, the first scientist replies with an ominous, if slightly heavy-handed, “But what if the world was to get slightly warmer.?” Dun, dun, duuuun… 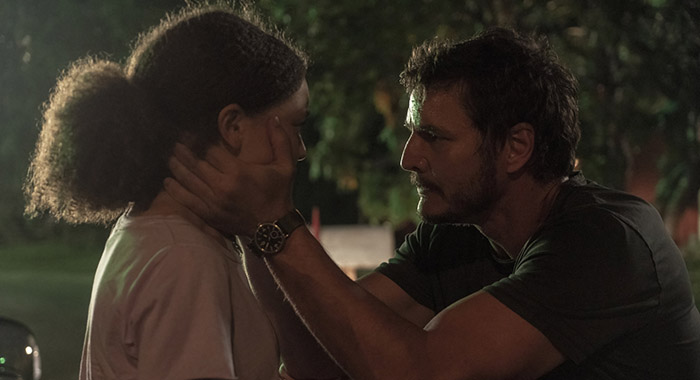 Cut to the episode’s second prologue, in 2003 (the adaptation alters the game’s timeline, moving its events 10 years earlier,) and it’s indeed warmer and the mushrooms are mobilizing. As in the game, we’re immediately introduced to Sarah (Nico Parker), a teen girl who lives in Texas with her construction worker dad Joel (Pedro Pascal).

In the game, players get to connect with Sarah, controlling her for a bit as the main character before all hell breaks loose. As a passive experience, the show obviously can’t offer this same interaction, so it spends much more time with the likable girl before things go south. She prepares a birthday breakfast for her dad, goes to school, has Joel’s watch repaired in town, and visits the neighbors. 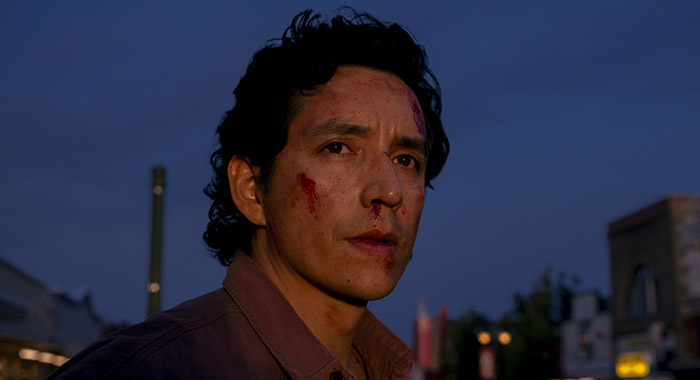 These scenes hit many of the source material’s same narrative beats – like the fixed timepiece – but go much further to establish the character. In doing so, the prologue’s shocking conclusion hits hard. Those who’ve played the game know what’s coming, as Joel, his brother Tommy (Gabriel Luna), and Sarah attempt to flee town once things get dicey. But newcomers will be absolutely gutted when Sarah, who’s so far been set up as a primary character, is shot and killed by a panicked soldier with an itchy trigger finger.

The extended, action-packed sequence leading up to Sarah dying in Joel’s arms tracks pretty closely with the game. There are some inconsequential differences, like Joel’s whereabouts when things initially go bad and which neighbor becomes infected and attacks him and Sarah, but it’s otherwise an accurate, often shot-for-shot recreation of the game’s events.

What is different – and very effective – are some earlier, not-so-subtle hints of what’s to come. Seeing a student’s hand twitching while Sarah attends class, for example, is pretty unsettling. But it’s a background, unfocused shot of her elderly, wheelchair-bound neighbor violently convulsing that will take up permanent residence in your nightmares.

Later, when the fungal outbreak begins firing on all cylinders, we also get more proof the infected aren’t your typical, foot-shuffling foes. Sarah stumbles upon that aforementioned senior citizen neighbor, who now appears to be devouring the corpse of a family member. But as she lifts her head, it’s revealed she’s not so much feasting on their flesh, but rather infecting them with spidery tendrils protruding from her mouth. Looking more extraterrestrial than undead, these grotesque growths are not in the game.

QUALITY TIME IN THE QZ 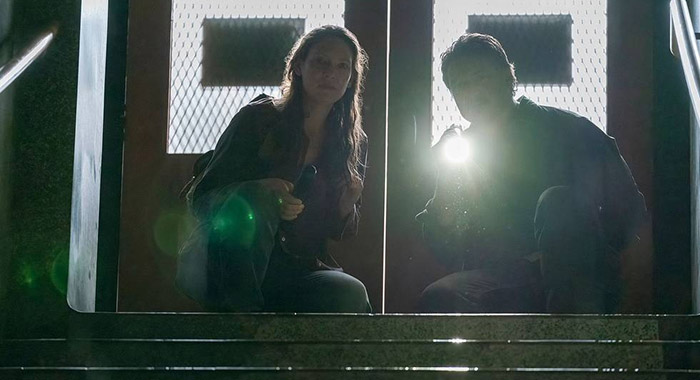 After we collect our jaws from the floor following Sarah’s heartbreaking demise, the series jumps ahead 20 years (to 2023 versus the game’s skip to 2033), and we’re introduced to Boston’s quarantine zone, where a much more physically weathered Joel – now a hardened smuggler – has relocated.

As with the virus and Sarah, the episode takes more time than the game does to set the table here. We first meet a young, infected boy, who’s stumbled into the QZ. He’s taken in by the Federal Disaster Response Agency, or FEDRA, a heavily militarized organization that oversees what’s left of the United States. A female FEDRA soldier seems caring and kind, offering the child medicine, food, and toys. “You’re safe,” she says, before he’s injected with a “little needle.”

Fast-forward to an outdoor fire pit, where Joel tends to a pile of burning corpses, including that of the sick boy. If that doesn’t establish FEDRA as one of the series’ main antagonists, the next scene – where they’re hanging civilians guilty of “unauthorized exit from a quarantine zone” – should do the trick. Joel, who’s just earned some ration cards for his work at the cremation pit, meets with one of the FEDRA creeps. The pair do some illicit dealings, and we learn Joel’s trying to acquire a vehicle to leave the QZ.

We get further context on this when he meets with a man who’s been trying to contact Joel’s brother. Tommy’s apparently moved to Wyoming, but hasn’t been heard from in over three weeks. Joel plans to search for him if he can secure that vehicle and a battery to power it. 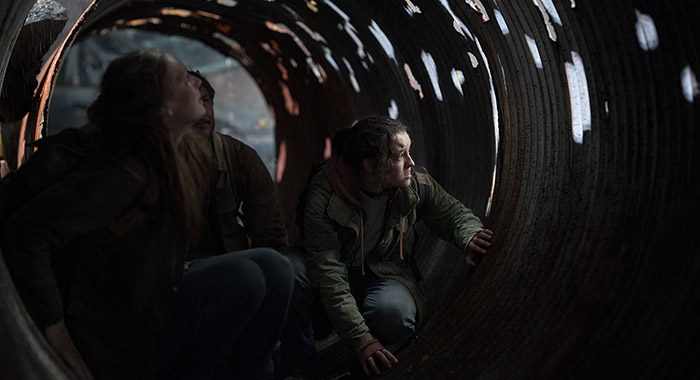 Much of what unfolds for the remainder of the episode sticks even more closely to the game’s events. Some of the smaller details have been altered, but most of the key plot points are intact. We meet scumbag Robert and Marlene (Merle Dandridge, who also voiced the character in the game) – leader of the Fireflies, an anti-FEDRA rebel group. As well as Tess (Anna Torv), Joel’s love interest and smuggling partner.

We’re also introduced to a “random girl locked in a room.,” who turns out to be Ellie (Bella Ramsey). She’s being held by the Fireflies and, in a meeting with Marlene, we discover Ellie’s been infected but isn’t susceptible to the virus. All these characters soon collide in a series of events that, again, while straying a bit from the game’s version of the story, ultimately lead to the same conclusions.

Robert’s a fellow smuggler, who’s double-crossed Joel and Tess by selling the battery they need for the car. When the pair hunt Robert down, they discover he’s been killed in an apparent firefight with Marlene and her crew (Joel’s responsible for Robert’s death in the game). Marlene’s also seriously wounded, complicating her plans to take Ellie West to help find a cure for the virus.

An uneasy deal is struck: Joel and Tess will ferry Ellie to the state house in Boston, where another group of Fireflies will meet them and continue Ellie’s journey. In return, Joel will get all the supplies he needs to continue his search for Tommy, who we learn is also a Firefly. Unaware of Ellie’s condition, Joel reluctantly agrees to the terms.

Joel takes Ellie back to his apartment, where they wait for nightfall before setting out. We discover he has a radio which uses era-specific music as coded messages – apparently, if an ’80s tune plays, trouble is afoot. Before the credits roll on the episode, the radio illuminates in the now-empty apartment. As the scene slowly switches to a wide shot of a bombed-out Boston, Depeche Mode’s “Never Let Me Down Again” spills from the radio’s tinny speaker. 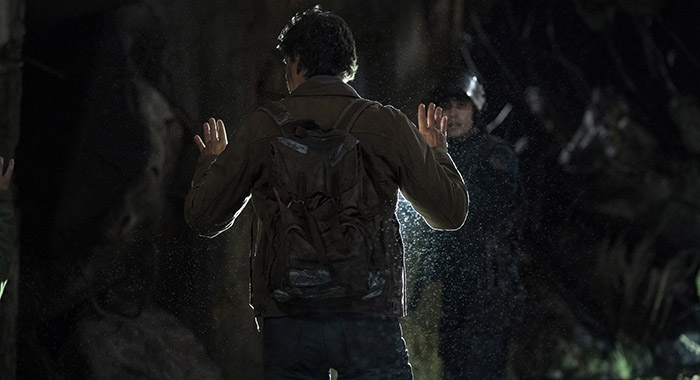 But before that ominous conclusion, we’re treated to a much bigger cliffhanger, one that departs from the game a bit to pack a harder emotional punch. While escaping the QZ, Joel, Tess, and Ellie encounter a patrolling FEDRA officer. It’s the same creep Joel met with earlier, but he’s even less likable now, ordering the group to their knees at gunpoint. In the game, the three are intercepted by two FEDRA foes, neither of which had been previously introduced.

As the soldier tests the trio for the virus, Ellie pulls a knife and stabs him in the leg. In the game, this results in a chaotic scuffle, with Joel and Tess ultimately disarming and killing the two grunts. In the show, however, it leads to the soldier angrily reacting and pointing his rifle at Ellie. The key difference here, is Joel’s reaction, as the standoff surfaces his memory – complete with a quick flashback – of Sarah’s shooting. He tackles the man and brutally beats him to death.

Of course, this all leads to Joel and Tess finding Ellie’s virus test results – which the soldier had dropped – and learning she’s infected. As in the game, Ellie pleads with them, insisting she’s shown no symptoms, even after three weeks. Looking at his bloody fists, and realizing more FEDRA goons are on the way, Joel has no time to react to this revelation. The three slip through a chain-link fence and into the unknown while the sirens of approaching FEDRA vehicles scream in the distance.