The Irishman First Reviews: A Mob Movie Masterpiece and One of Scorsese's Finest

Critics say the epic crime drama is everything audiences want from its accomplished director and cast, and it's a serious awards contender.

Martin Scorsese’s The Irishman isn’t just any run-of-the-mill awards season contender. It’s an epic collaboration between some of modern cinema’s most accomplished and celebrated icons, and it’s one of the most anticipated films of the year. So does this crime drama from the director of Goodfellas and The Departed — reuniting here with Robert De Niro, Joe Pesci and Harvey Keitel and now working with Al Pacino for the first time — live up to expectations?

Reviews out of the movie’s opening-night premiere at the New York Film Festival are resoundingly positive in that regard. Not even the length or the notorious de-aging special effects can hold down what’s being called one of Scorsese’s best.

Here’s what critics are saying about The Irishman:

Has Scorsese got another gangster masterpiece on his hands?

It’s the film that, I think, a lot of us wanted to see from Scorsese… rippling with echoes of the director’s previous Mob films but [it] also takes us someplace bold and new.
– Owen Gleiberman, Variety

The Irishman has both the frenetic swagger of his mob movies and the more contemplative gut wrench of his most spiritual films, like 1988’s The Last Temptation of Christ and his most recent film, 2016’s Silence.
– Alissa Wilkinson, Vox

This is Scorsese’s least sentimental picture of mob life, and for that reason his most poignant.
– A.O. Scott, New York Times

Scorsese is at the top of his game.
– Johnny Oleksinski, New York Post

The Irishman may not be as groundbreaking as Mean Streets or Taxi Driver, but then again, what is?
– Caryn James, BBC.com

So it’s not just another Goodfellas wannabe?

This is not Goodfellas. This is not Casino. This is Scorsese at his most reflective, crafting a masterwork that finds the filmmaker reflecting on everything he’s done, and what it’s all amounted to.
– Chris Evangelista, Slashfilm 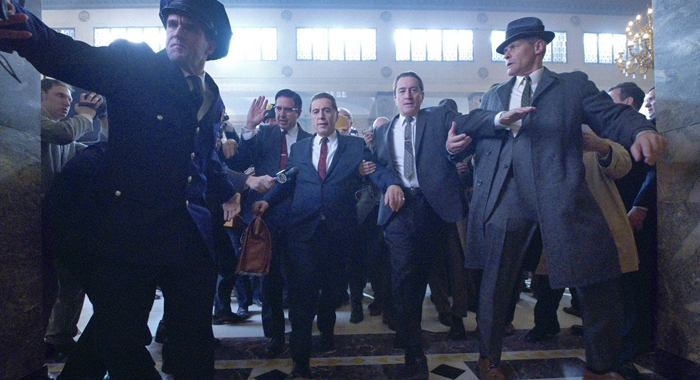 Is it reminiscent of any other movies?

The Irishman reminded me a bit of Unforgiven: It feels, at last, like a critical eulogy for an era of crime fiction that Scorsese and De Niro and Pacino built.
– A.A. Dowd, AV Club

There are aspects of The Irishman that recall David Lynch’s work on The Return.
– Joe Dieringer, Screen Slate

Move over Braveheart. Move over Air Force One. Move over Field of Dreams, Gladiator, The Right Stuff, Ben Freaking Hur. The Irishman could well be Dad Movie of the Century.
– Taylor Antrim, Vogue

How are Robert De Niro and Joe Pesci?

De Niro is in top form… he hasn’t been this good in years, and his rather understated performance really carries the movie.
– Brett Arnold, Consequence of Sound

De Niro’s superb performance is a close cousin to his work in GoodFellas.
– Owen Gleiberman, Variety

What a joy it is to have Pesci back on the screen and to see him deliver such soulful work in the process…. the film really belongs to Pesci.
– Chris Evangelista, Slashfilm

Joe Pesci emerges from retirement to give a superbly measured performance… the polar opposite of the lit-fuse firecrackers Pesci famously portrayed for Scorsese.
– David Rooney, Hollywood Reporter

And when they’re together?

De Niro and Pacino play off one another beautifully, with De Niro often playing the calm straight-man to Pacino’s loudmouth comedian. A warmth radiates between the two.
– Chris Evangelista, Slashfilm

When [Pesci] and De Niro are onscreen together, you believe in the power of art.
– A.O. Scott, New York Times 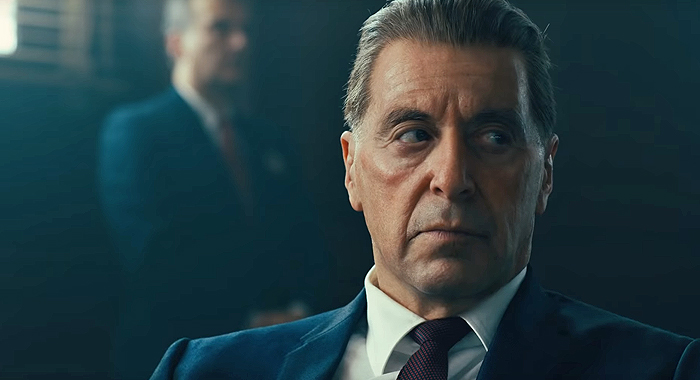 What about Al Pacino?

Pacino arrives almost a third of the way into the film and instantly electrifies it.
– Caryn James, BBC.com

Pacino shines among an incredible cast. [It’s] his best display of rampant emotion and thoughtful characterization since Heat. He is Hoffa.
– Robert Daniels, 812filmreviews

More than just a believably magnetic Hoffa, Pacino kicks the film into the realm of pure, delicious crazy.
– Joshua Rothkopf, Time Out

Pacino’s over-the-top presence borders on parody, but at the same time, feels attuned to the larger-than-life shadow that Hoffa cast in his prime.
– Eric Kohn, IndieWire

How distracting is the de-aging effect?

Is the de-aging process perfect? Of course not… the process is still amazing, and there’s a strange, singular way that it works for the movie.
– Owen Gleiberman, Variety

The de-aging is… pretty good. I’d say the best I’ve seen so far… you do get used to it.
– Mike Ryan, Uproxx

The eyes adjust to the illusion. Moreover, this magic trick speaks to the unreliable unreality of memory itself… a “problem” with (potentially accidental) resonance.
– A.A. Dowd, AV Club

After a while, you adjust, or rather, you get tired of probing the slightly-off evidence of your eyes and the headache it produces. There’s a lot of fun to distract you.
– Joshua Rothkopf, Time Out

Now and then I had to stave off a PTSD flashback to Robert Zemeckis’ Polar Express.
– Stephanie Zacharek, Time Magazine 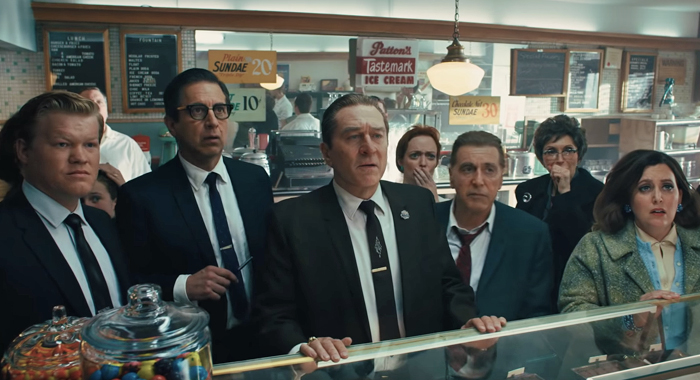 What about the runtime?

The film, which clocks in at 209 minutes — even longer than The Return of the King and Avengers: Endgame — barely feels its length.
– Karen Han, Polygon

This is a remarkably brisk three-and-a-half hours — Scorsese, at a ripe 76, still directs with the energy of a hungry young filmmaker.
– A.A. Dowd, AV Club

The material would have been better served by losing an hour or more to run at standard feature length, or bulking up on supporting-character and plot detail to flesh out a series.
– David Rooney, Hollywood Reporter

I’m not sure The Irishman needed all 209 minutes… even when the characters are younger, [it] moves at a leisurely (or even elderly) pace.
– Matt Singer, ScreenCrush

Its last half-hour is deeply moving in a way that creeps up on you, and it’s then that you see what Scorsese was working toward all along.
– Stephanie Zacharek, Time Magazine

[Steve] Zaillian’s messy script, an ambitious assemblage of timelines, takes its time to fully immerse the viewer into its world… the second half is more lively.
– Jordan Ruimy, World of Reel

It’s a film that only gets further under your skin after you leave the theater (or close your Netflix browser, as the case may be).
– Karen Han, Polygon 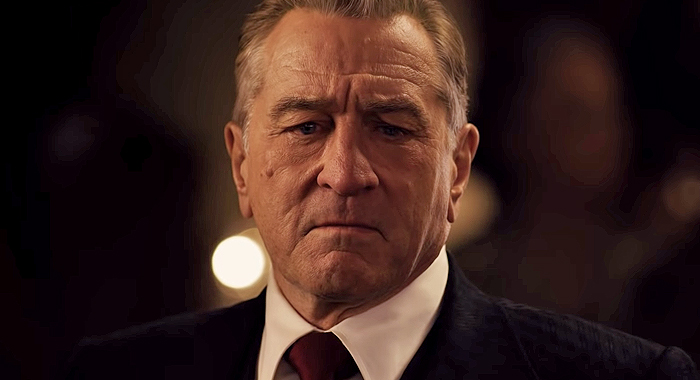 Does it need to be seen in a theater?

The film, by design, is episodic in a way that’s small-screen-friendly.
– Owen Gleiberman, Variety

It should go without saying but yes, if you can, definitely see a new Martin Scorsese movie on the big screen first.
– Frazier Tharpe, Complex

What about the film’s female characters?

If one fault could be found with Scorsese’s latest work, it’s the waste of intriguing women characters.
– Robert Daniels, 812filmreviews

For much of The Irishman, the women are at the margins — wives and daughters, always around, rarely saying anything. This isn’t atypical in Scorsese’s work, which rarely centers on women.
– Alissa Wilkinson, Vox

The movie lacks a strong female voice but such limitations speak to Sheeran’s character flaws more than those of The Irishman.
– Eric Kohn, IndieWire

It’s a shoo-in for the Oscars, though, isn’t it?

In terms of the Oscar race, The Irishman is what we thought it was, a likely Best Picture contender with a chance at a truckload of nominations.
– Gregory Ellwood, The Playlist

If the Best Supporting Actor Oscar came down to Pacino and Pesci, I have no idea who I’d support. Both performances are transcendently good.
– Brett Arnold, Consequence of Sound

The Irishman opens in limited release on November 1 and releases on Netflix on November 27. 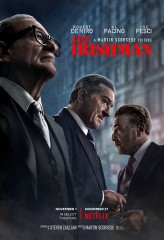