The Golden Globes May Be Over, and Here's Why

Need a full-blown explainer on this Golden Globes situation? We're breaking down the Hollywood Foreign Press Association's path to its critical split with broadcaster NBC. 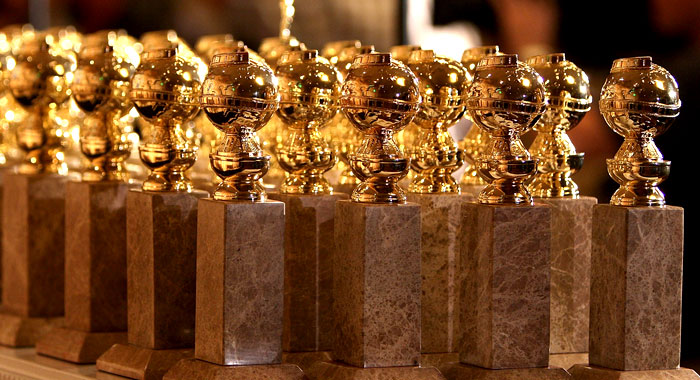 On Monday morning, NBC announced that it would not broadcast the 2022 Golden Globe Awards in what was seen as a crippling blow to the Hollywood Foreign Press Association (HFPA), the organization that hands out the annual prizes and which has been mired in bad headlines over the past several months. The statement from NBC, which is a part of Rotten Tomatoes’ parent company NBCUniversal, read:

“We continue to believe that the HFPA is committed to meaningful reform. However, change of this magnitude takes time and work, and we feel strongly that the HFPA needs time to do it right. As such, NBC will not air the 2022 Golden Globes. Assuming the organization executes on its plan, we are hopeful we will be in a position to air the show in January 2023.”

Though many entertainment insiders have long derided the HFPA for its lack of diversity, unprofessional actions by its members, and the extravagant gifts those members receive, most believed the group was immune to any real reform. However, today’s announcement from NBC, which comes on the heels of fallout from a bombshell LA Times report back in February that detailed decades of self-dealing, unethical actions, homophobia, sexism, and racism by several members, may prove to be the end of the organization as we know it.

But why exactly is NBC – along with entertainment powerhouses like Netflix, Amazon, Warner Bros., and Tom Cruise(!) – cutting ties with the once-coveted awards show? Here’s a breakdown… 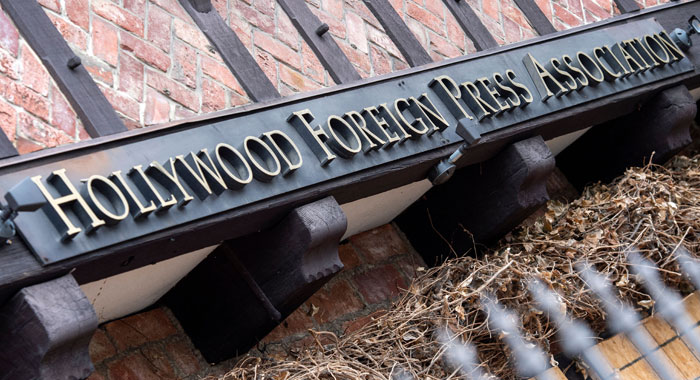 First, let’s talk about the organization itself. The Hollywood Foreign Press Association is a small group of around 90 journalists who cover entertainment for international audiences while based in Southern California. The group, which has been around since 1944, has been the subject of several controversies, criticized for everything from a poor selection of nominated films to blatant bribery. Some say that some of the HFPA’s members have tenuous ties to Hollywood and/or lack journalistic bona fides, and in the Times report, it was confirmed that the group had not had a Black member in over 20 years. The report also noted that several seemingly qualified journalists have been rejected for membership, with one applicant suing the organization just last year, dubbing them an entertainment “cartel.”

Five-time Golden Globes host Ricky Gervais himself once compared the Globes unfavorably to the Oscars in 2012, saying the former was “a bit louder, a bit trashier, a bit drunker, and more easily bought – allegedly.” His comments drew big laughs and big applause on the night because many in the room judged the quip to be all too true. 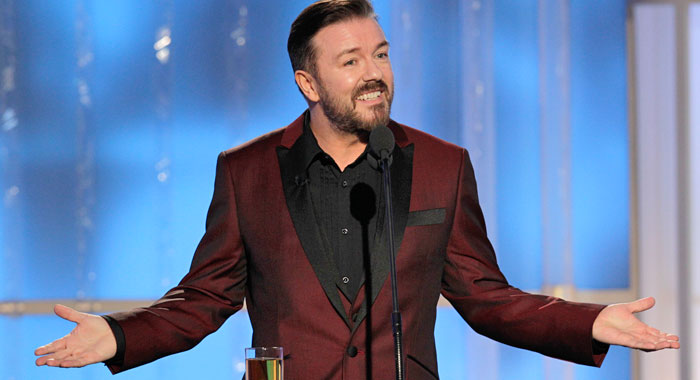 The questionable nominations had also been the talk of the industry since well before the Times report. This year, pop star Sia’s controversial film Music earned two nominations despite being blasted by critics to the point that its Tomatometer score stands at just 8%. (Its Audience Score is a similarly paltry 13%.) The assumed justification for this is that, because Sia is very camera shy, the nomination would compel the musician to make herself available for interviews and selfies – something the HFPA has become notorious for asking of every celebrity. In 2017 after Tom Ford, the fashion-designer-turned-director of Nocturnal Animals, gifted HFPA members a swag bag of his own branded fragrances, his star Aaron Taylor Johnson was chosen as Best Supporting Actor over eventual Oscar winner Mahershala Ali (Moonlight), a decision that left many scratching their heads and some crying foul. The backlash was so loud the group was told to return the gifts by the HFPA board. In any given year, pundits point to a handful of confounding nominations that are attributable less to the quality of performances and more to the HFPA’s desire to have certain famous faces show up for their red carpets.

Still, despite the constant controversy and silly choices, the show was considered a fun watch by most; organizers’ choices of tables instead of theater seats allowed A-listers to mingle together and perhaps tip a glass with Oprah, Beyoncé, Tom Hanks, or Lady Gaga… all while we watched, looking for fun, meme-able moments. It’s worth noting too, that the Globes have also managed a relatively consistent viewership, save its Zoom-filled event this year, which came just weeks after the LA Times piece but was still on par with an Oscars ceremony that boasted full attendance and a red carpet. (Hosts Tina Fey and Amy Poehler, as well as HFPA members, had to address the controversy during the show.) All the glitz of the event, plus those ratings, are largely why many Hollywood players have begrudgingly played along, hoping to help their Oscar chances with a win or good moment and boost awards-season ticket sales and ratings for the nominated films and TV shows. 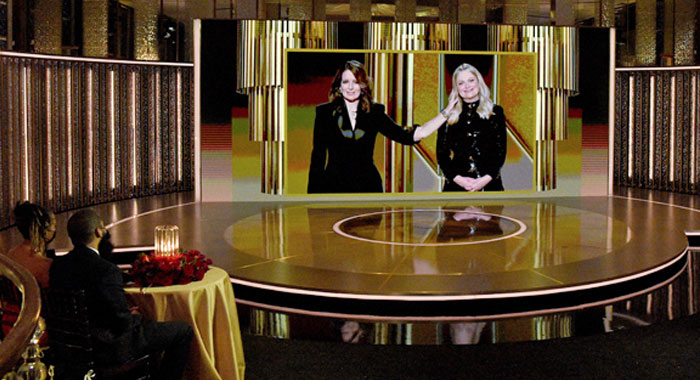 Studios have been all too happy to participate in pricey private HFPA press conferences, send members glitzy swag (sometimes), host dinners for them, and even fly them out to set visits at luxury locales. Last year, for example, the entire HFPA was flown to Paris to visit the set of Emily in Paris and treated to a stay at a 5-star hotel, which was brought up quickly after the group gave the widely panned Netflix series two nominations. Netflix, however, was not the only or the most egregious offender; in fact, that was how most of the town operated – because the incentives outweighed the downside. That was until now.

After the LA Times story broke, the HFPA was quick to say a change was coming. The membership, which had long bristled at adding new members and diversifying its ranks – in order to guarantee predictable results, according to the LA Times – was now under immense pressure to do just that or risk losing its lucrative television contract, the group’s primary source of revenue. The HFPA quickly hired a diversity consultant and crisis PR management team to help facilitate the change they announced was coming, first via a statement and again during the live awards show broadcast. 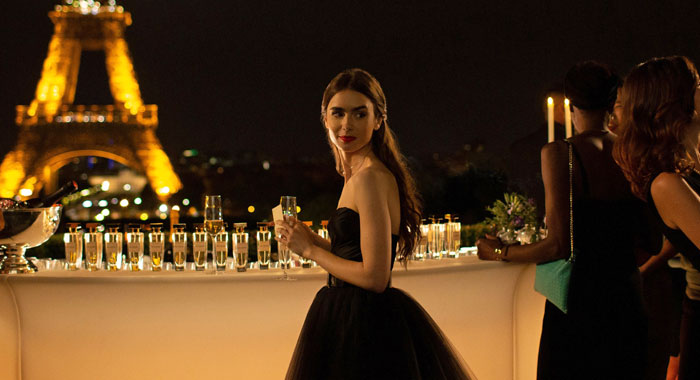 As the talks happened behind the scenes, the industry’s most powerful PR agencies banded together on March 15th with a pointed warning that they would no longer engage with the group unless the changes were substantial, quick, and long-lasting. This was significant, as PR firms typically try to avoid weighing in on such controversies, but as the gatekeepers to the top talent in Hollywood, they hold immeasurable power over whether the HFPA can have those desirable A-listers attend their show. Moreover, the idea of high-powered competitors banding together on anything like this is a clear illustration of how frustrated they are with the situation and how committed they are to fixing the underlying issues. The HFPA replied that they were taking time to consult various stakeholders, including NBC, the awards show’s producers, Dick Clark Productions, and industry leaders, and their plans would be announced on May 5.

The proposed reforms and the new timeline they released after NBC pulled the TV Contract are as follows:

The initial proposals were leaked before the deadline without a clear timeline, and the reaction throughout Hollywood was a swift and immediate chorus of “do better.” No word yet on how the new timeline will be received, but the HFPA was clear these measures would be enacted regardless of the 2022 television broadcast. Still, many are unsatisfied primarily because, more than the membership and self-dealing, the HFPA has been accused of shameful bouts of unprofessionalism over the years. Stories from Ava DuVernay, Shonda Rhimes, and Brendan Fraser have detailed abuses that many viewed can’t be fixed by the initial proposals, which were also considered too slow-moving to address the membership issues. 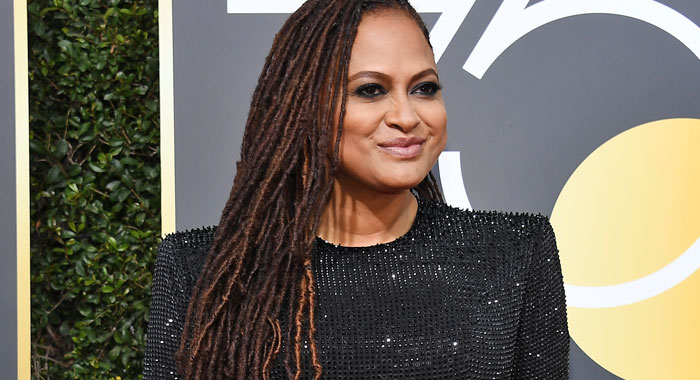 Inclusivity activist organization Time’s Up released a statement that decried the proposed changes as window dressing, while the PR firms who first proposed a boycott of HFPA events were slightly more measured, saying this was a good step but not near enough and far too slow for a group of so few members. Then on Friday, a letter from Netflix Co-CEO Ted Sarandos took what was already a crisis for the HFPA and turned it into a full-blown disaster when he announced Netflix would not participate in any HFPA events until more changes were made and made quickly. In a message directed to the organization, Sarandos stated: “Today’s is an important first step, however, we don’t believe these proposed new policies — particularly around the size and speed of membership growth — will tackle the HFPA’s systemic diversity and inclusion challenges, or the lack of clear standards for how your members should operate.” Amazon and Warner Bros. soon followed with similar statements.

It was a game-changing move. In truth, for everything said up to this point, if the studios were satisfied with the HFPA’s proposals, nothing was going to change, as they held all the power. But with the weight of the increasingly powerful streamers and a major studio joining in, the winds were shifting.

It didn’t help that at the height of the organization’s current woes, both the diversity consultant and PR crisis manager discontinued their work with the HFPA, nor that fresh issues have emerged: A couple of weeks ago, a current member mistook Daniel Kaluuya for Leslie Odom Jr. in the Oscars press room – a gaffe that left Kaluuya stunned and for which the journalist has refused to apologize. It’s little wonder that this week three-time Golden Globe winner Tom Cruise sent his awards back to the HFPA in protest of their actions. 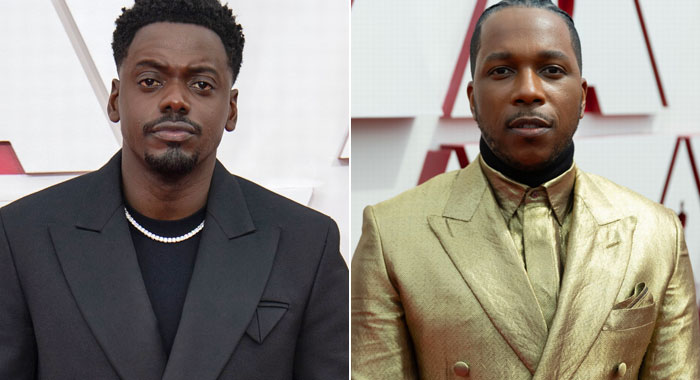 With NBC’s announcement that it will not air the broadcast they had paid $60 million to secure just last year, the crisis is now existential for the HFPA. As things compound, many cannot help but ask, “Can the Golden Globes survive?”

Some have suggested the HFPA can indeed weather the storm with a severe overhaul, while others say the situation is too far gone to repair, and perhaps NBC and other networks should look at a different set of awards to spotlight with a major broadcast, as some have suggested. It’s difficult to dislodge anything with this much history in Hollywood, and funnily enough, all of this has happened before.

In 1968, NBC pulled their TV contract with the Golden Globes when an FCC report detailed that the HFPA “substantially misleads the public as to how the winners were chosen and the procedures followed in choosing them.” At that time, the group did not actually vote on category winners, as it was assumed, but rather decided winners via a lobbying committee. After changes were made and a professional accounting firm was hired to compile the vote, NBC ended up televising the show, and that is what we think will likely occur this time around.

If the Golden Globes disappear, that leaves a gap in the awards calendar in early January, something that second-tier shows like the Screen Actors Guild Awards or Critics’ Choice Awards could fill. But unless they’re partnered with a major broadcaster like NBC – with its global reach and top hosting and presenting talent from a pool of SNL alums and late-night leaders – it’s unlikely they would hold into it if NBC and the Globes eventually make nice. For now, we can all agree that the Globes must make swift changes, or they will cease to exist; it still remains to be seen, however, if that is possible, given the current membership’s reputations.