It's gross, it's inane, it's poorly crafted, and it wholly deserves its Zero on Rotten Tomatoes. 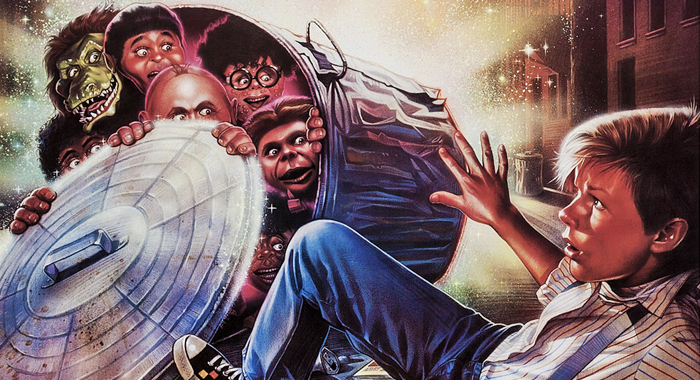 The Garbage Pail Kids Movie’s roots can be traced back to Topps’ Wacky Packages cards, which offered kid-friendly spoofs of popular brands, logos, and mascots. The parodies recalled Mad Magazine at its grossest and most scatological but also at its most savagely satirical.

Before he wrote the seminal graphic novel Maus, Pulitzer Prize-winning cartoonist Art Spiegelman was among the geniuses who helped make Wacky Packages an oasis of subversion in the trading card aisles. Zippy cartoonist Bill Griffith and superstar caricaturist Drew Friedman were also among the big names in Topps’ roster of ringers, but it was the talented and prolific John Pound who created the unpublished Wacky Pack card that led first to the Garbage Pail Kids, then the Garbage Pail Kids phenomenon/controversy, and then, sadly, The Garbage Pail Kids Movie.

The John Pound sketch is as brutal as it is funny. He undercut the maudlin sentimentality of Cabbage Patch Kids — the adorably ugly, high-priced baby-doll orphans that conquered the hearts and minds of our nation’s children in the 1980s — by making his doll a gleefully discarded piece of trash, a baby that was tossed into a garbage can and abandoned, but came with adoption papers to be sent to the Department of Sanitation.

Topps chose not to publish the Wacky Packs’ Garbage Pail Kids parody. Instead, it decided to launch an entire line of Garbage Pail Kids trading cards taking aim at the Cabbage Patch Kids phenomenon so directly and with such stomach-churning glee that, in 1986, Coleco, the owners of Cabbage Patch Kids, successfully sued Topps for copyright violation.

The Garbage Pail Kids were controversial for other reasons as well: teachers hated them and schools regularly banned them as unnecessary — not to mention aesthetically unpleasing — distractions for moppets without much of an attention span in the first place. 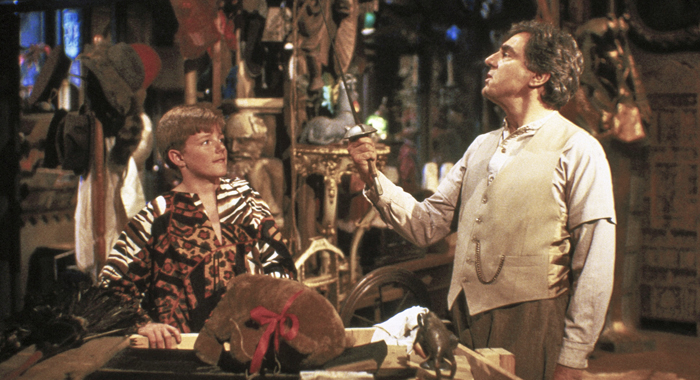 First, there’s Nat Nerd, whose signature move is soiling himself whenever anxious. The Garbage Pail Kids Movie hopes you find this hilarious, because it’s a running gag it returns to over and over and over again until you begin to wonder whether the filmmakers were motivated more by weird fetishes than a desire to make a passable children’s film.

There’s also Valerie Vomit, whose trademark quirk you can probably figure out by her name; Windy Winston, an iconoclast who uses his singular penchant for explosive flatulence to win bar fights, make friends, and change the world; and Greaser Greg, a switchblade-wielding 1950s Andrew “Dice” Clay wannabe who, in one horrifying sequence, is found playing a very sexual game of “Doctor” with one of his fellow “Kids.”

Dodger pines for Tangerine from a distance but spies an opportunity to win her over when she gets excited about a jacket designed and sewn by the Garbage Pail Kids in the style of Michael Jackson-by-way-of-Corey Feldman.

Tangerine, an evil woman with only greed and larceny in her cold, Grinch-like heart, implores the lovestruck Dodger to crank out more clothes for her to pretend she designed herself, leading to many riveting montage sequences of the Kids crafting tacky outfits on a tight deadline. Street fashion and zeitgeist-capturing trading cards about belching, farting, vomiting monsters might seem like a strange fit. But the genius of The Garbage Pail Kids Movie’s fashion-centered premise is that it takes a movie ostensibly laser-targeted at disgusting eight-year-old boys and makes it all about clothes and kissing pretty girls. 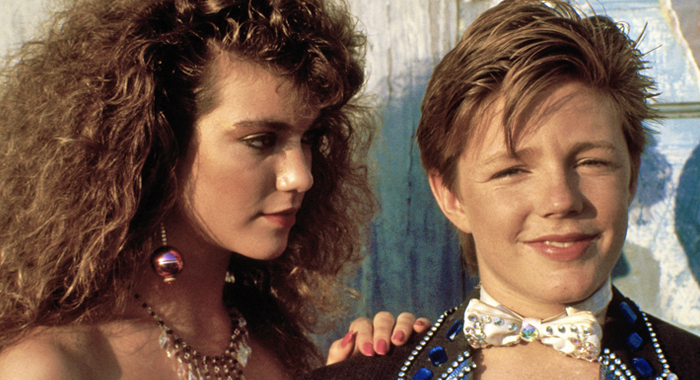 If Astin and Newley are castaways from some lost 1960s live-action Disney movie, its bullies and love interest dress and act like New Wave twenty-something punks from a Cannon exploitation movie. Tangerine, for example, has the name, skimpy fashion-forward wardrobe, and magnificent perm of a hooker who might seek Charles Bronson’s protection in a later Death Wish sequel. The filmmakers know that the only thing its target audience likes more than clothes and teamwork are weirdly one-sided, vaguely masochistic, quasi-romantic relationships between lovestruck man-children and emotionally damaged, much tougher mean girls.

Newley, God bless him, is an oasis of professionalism in a sea of terribly executed bad ideas. He delivers twee lines like, “Funny people should call this junk, isn’t it, when every single piece is a diary of the human spirit!” and “Ugliness is cruelty, meanness of spirit, greed,” as naturally as possible, with mixed success. The good Captain’s honeyed words may be true, but I would add “the Garbage Pail Kids’ physical appearance in this god-awful movie” to his definition of ugliness. The Garbage Pail Kids aren’t just hideous on an external level, they’re just as ugly on the inside. Though the filmmakers might have aspired to the ugly-cute appeal of E.T., they’ve instead created the kind of deeply scarring images that can never be unseen.

As Captain Manzini muses at one point, “We cannot choose the way we look, but we can choose the way we behave.” Of course, this is The Garbage Pail Kids Movie, so every zen-like koan of wisdom is punctuated by an explosive blast of flatulence, ever so slightly undercutting its syrupy message.

The Garbage Pail Kids Movie accidentally invents two singularly unpalatable sub-genres: kiddie body horror (think David Cronenberg for tots, especially the Kids’ “Baby” character Foul Phil, who is unnerving in ways that are difficult to even put into words) and kiddie noir. In multiple ways, it’s extraordinarily dark for a film aimed at small children. It operates in a shadowy realm of monsters, tawdry, scheming femme fatales, and bullies who will pummel you relentlessly with their fists, just because. Visually, the filmmakers try to use darkness and shadow to hide — or at least obscure — the amateurish, half-finished, vomit-inducing ugliness of its Kids. They do not succeed. 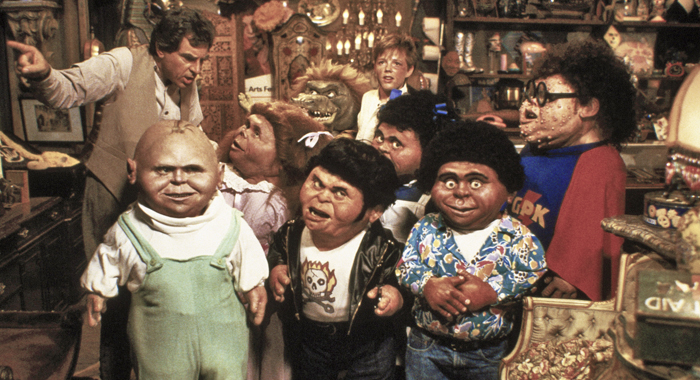 But the film’s bracingly inappropriate darkness is thematic as well. It centers, after all, on a seemingly orphaned fourteen-year-old boy who makes inhuman child monsters from outer space toil in sweatshop-like conditions to manufacture cheap clothing for a vaguely sociopathic girl, one who, by the way, is clearly sleeping with a twenty-something bully who robs and physically assaults Dodger on a regular basis.

The Garbage Pail Kids Movie is so inexplicably, excessively dark that when it reaches its climax, and pint-sized Dodger is pummeling Juice in the face over and over again while weeping in rage and confusion, the brutality feels oddly justified, as if the movie pushed him into this corner and violence was his only recourse.

Then again, it’s not easy getting audiences to root for and be emotionally invested in characters whose defining feature is their inability to regulate their bladder or their flatulence. It turns out you can’t generate a Spielbergian sense of awe about the unknown wonders of the world and prominently feature telltale characters like Valerie Vomit.

Newley’s performance and a production number about the joys of working together to help a sad little boy try to woo an evil schemer are like a big ball of sugar dumped right into the middle of a wretched fart stew of a movie.

“To be blessed with unusual features is an adventure,” old twinkly-eyed Captain Manzini tells the Kids in an attempt to make them feel better about being God’s deeply regretted mistakes.

That may be true in some instances, but here, it’s actually more of a waking nightmare. 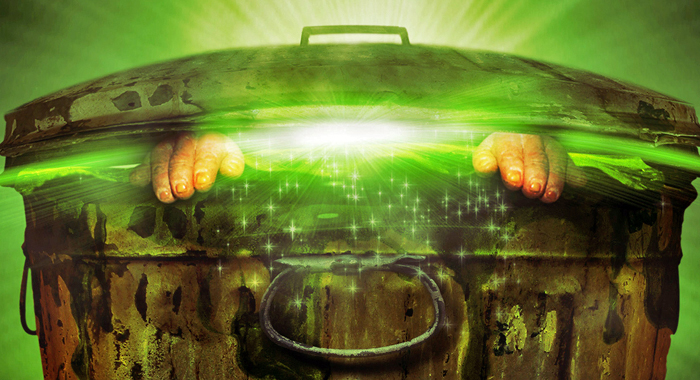 This might be a case where a zero might actually be overly generous. The filmmakers somewhat notoriously neglected to finish their animatronic Garbage Pail Kids costumes before filming started. That’s an ominous omen for a costume-based film like this, but it’s nowhere near as devastating as the filmmaker’s inability to make an actual movie. This is pure trash, appropriately enough, and not even the fun type.