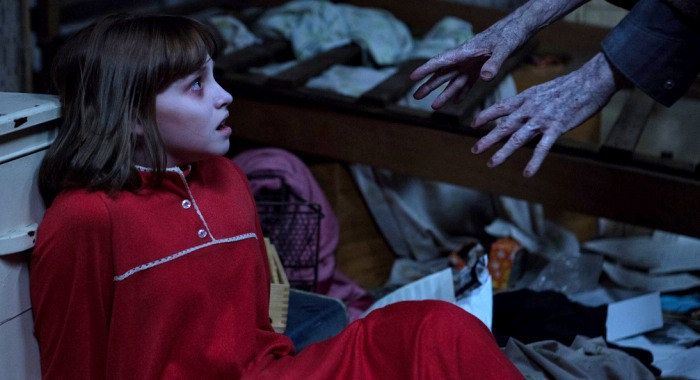 Fans of the hit The Conjuring are anxiously awaiting the sequel The Conjuring 2, which opens in June and is based on another frightening case investigated by real-life paranormal specialists Lorraine and Ed Warren (played by Vera Farmiga and Patrick Wilson). The director of the first film, James Wan, returns to helm the sequel, but Frances O’Connor joins the cast this time around as a single, working-class mother in need of protection from supernatural forces tormenting her and her children. The Warrens to the rescue!

But the spookiness isn’t limited to the screen; when a priest who’s authorized to perform building exorcisms — but not those of individuals — blessed the set at the beginning of production of both films, strange things happened behind the scenes. So, do the actors believe in the supernatural? During a set visit last year, Rotten Tomatoes got to ask them.

Vera Farmiga felt she needed to buy into the supernatural “hook, line, and sinker” because she plays real-life paranormal investigator Lorraine Warren, “and she believes it.” But that’s not to say she didn’t already have beliefs of her own. “I believe in negative mysticism; I believe in positive mysticism,” she said. “I have forged my own spiritual narrative in terms of what I believe.” Certain psychological challenges made working on the first The Conjuring film hard on Farmiga, but they are no longer problematic: “I was really challenged by the first one. It was harder for me — especially in pre-production — all the research that went into it was very difficult for me psychologically. I was very spooked and at all times would look over at the kids to make sure they weren’t levitating. Living in fear. My life was drenched in fear and that’s very different this time around… I like to think I have armor now.”

And while Patrick Wilson doesn’t believe much in the supernatural  — “I believe that they believe,” he said of the folks with real-life experiences — he does believe “there’s another force out there, whether that delves into religion or just spirituality.” On the other end of the spectrum, Frances O’Connor was raised Catholic and does have some supernatural beliefs. She even bought crystals that she wears sometimes when she’s feeling a “little freaked out.”

Similar to the reports of ghostly occurrences on the set of The Enfield Haunting, a British import miniseries starring Timothy Spall about the same Enfield poltergeist spotlighted in the film, we at Rotten Tomatoes got to hear first hand about what went on while making The Conjuring 2, and the cast members were eager to discuss their own personal experiences with us. Here are the scary — or just plain odd — ghostly stories we were told. 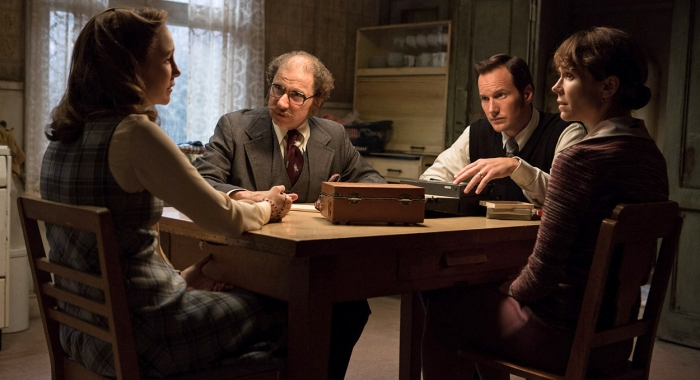 Frances O’Connor told us that she’s had several supernatural-ish occurrences and that she does believe in some of the eerie stuff portrayed in the film. Once, on a road trip with her husband (boyfriend at the time), the pair stayed in an Oxford, MS hotel that spooked the actress. Upon entering the room, O’Connor “just got a horrible feeling about it.” When she slept, she dreamt of a man with a red moustache in a military uniform – she was reading his tarot cards. “And the numbers were, like, 13, 1, 1, 1,” she said. When the dream woke her, she felt her husband lying behind her. She continued, “But I opened my eyes and he was on the other side of the bed. And I swear to God, I could feel someone lying behind me. I got up and I jumped on my husband, who really wasn’t very happy. I said, ‘There’s somebody in the room!’ So we turned the lights on and there was nothing.” Afterwards, as she lay in bed, she thought she felt somebody flick her hip. The next morning the two noticed a huge plaque announcing that the hotel was built where many confederate soldiers died. They hadn’t seen the plaque until that next day. 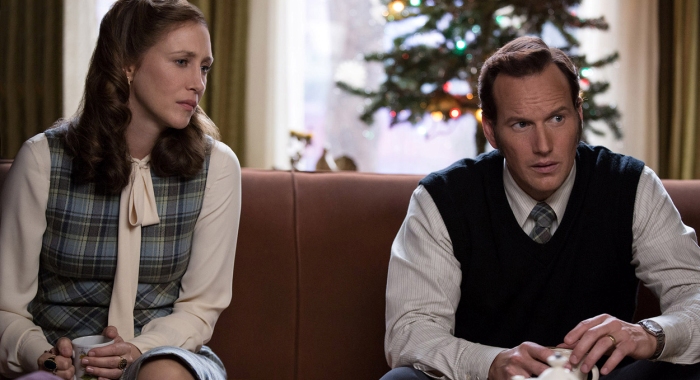 Vera Farmiga has been party to multiple supernatural experiences. Witnessing a teacup flying off a shelf in a Massachusetts rental house is just one. Farmiga recalls the production of the first film, when she initially accepted the role of Lorraine Warren over the phone with James Wan after learning Patrick Wilson was confirmed to co-star. Prior to the call, she had been researching Warren online because she was previously unfamiliar with the real-life paranormal investigator, and when she reopened her computer screen, she was surprised to see what looked like three digital claw marks running diagonally from the upper right corner to the lower left.

Fast forward to the day she finished filming. She returned to her upstate New York house and went to bed, only to be “woken up to three claw mark bruises across my thigh.” Farmiga still has the photograph on her phone, which she showed us on set. “There’s evidence there, but I was adamant about not feeling fear,” she continued. “It’s emotional armor; you figure out how to build it around yourself, even though there’s clear evidence of some strangeness that’s occurred. My husband did not do that to me; I did not scratch some mosquito bite.” 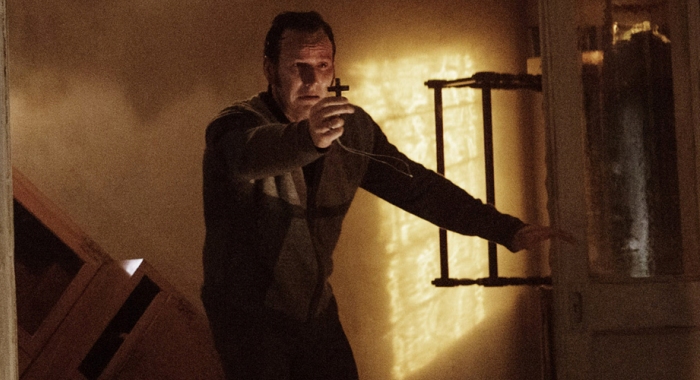 One day, Patrick Wilson was walking on the studio lot to get his coffee and passed through an area where he had run into the assistant to filmmaker Zack Snyder a week earlier – they had worked on Watchmen together. The assistant told him that Snyder was in London and wasn’t sure when he would be back. Wilson told us, “Just as I’m walking there, I start thinking, ‘I wonder where Zack is.’ And he literally comes around the corner. I have not seen the guy in years. Is it coincidence? Probably. But I don’t just hang out there, you know? Those to me are like little moments where you feel like there’s something else out there.”

STRANGE THINGS HAVE BEEN HAPPENING ON THE SET 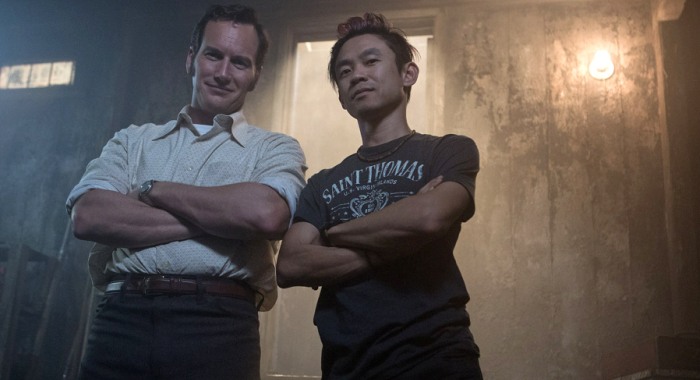 Aside from the cast having their own personal experiences, a publicist for the film informed us he’d been receiving reports of little weird occurrences on set. There were reports of drilling happening below the stage when nobody was down there, along with unexplained hammering sounds. Leigh Whannell, the film’s still photographer — who also worked on Insidious 2 and Insidious 3 — visited the set one day, and we were told that, while he was on set, his Insidious photographs suddenly popped up on his iPad. Those particular photos, however, had never been on his computer or his iPad, and now he was unable to delete them. The publicist tried to help Whannell delete the pics, but when they plugged the iPad into the computer, they would mysteriously disappear. The pictures, however, remained on the iPad.

The same publicist informed us that a Warner Bros. security guard who moonlights as a ghost hunter divulged that Stage 4 — one of the stages being used for The Conjuring 2 — is “notoriously haunted; it’s one of the most haunted stages on the lot.” The guard believes the ghosts that haunt the set are former Warner Bros. employees, benign in nature, who enjoy playing harmless practical jokes.