The latest monster to take up residence in Gotham City is familiar to fans already. 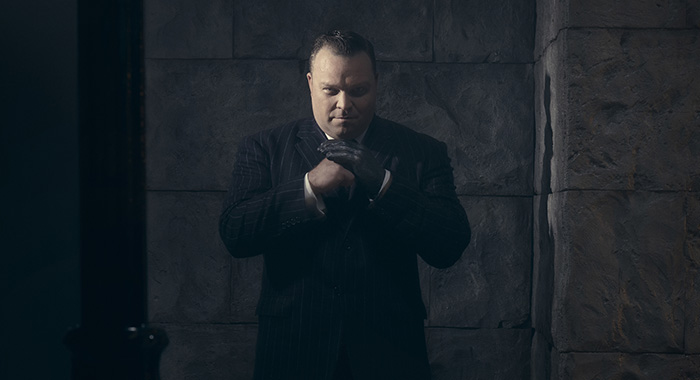 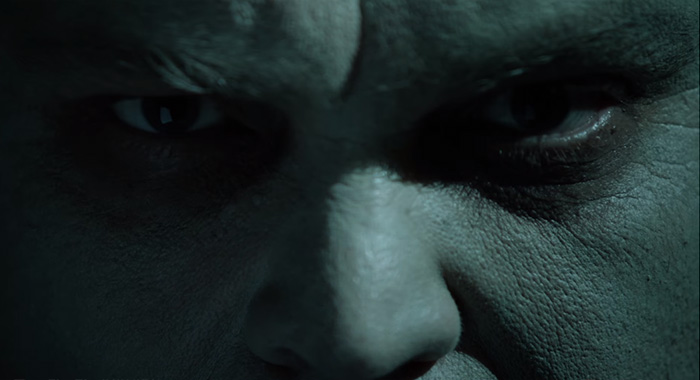 And as Butch prepares to make his return as Grundy in this week’s episode of Gotham, “A Dark Knight: The Blade’s Path,” let’s take a look back at some of Grundy’s exploits in comic books. While Gotham might be his most high profile appearance, he has a long history in both mediums.

Born on a Monday

Grundy has been part of the DC Universe for a very long time. Created by sci-fi legend Alfred Bester and artist Paul Reinman in October 1944’s All-American Comics #61, Grundy first appeared as an adversary of Alan Scott, the Golden Age Green Lantern. He began as a 19th century merchant named Cyrus Gold. In 1894, his dubious dealings caught up with him and he was left for dead in an area near Gotham City called Slaughter Swamp. Reanimated after 50 years, the part man/part swamp creature had few memories of his other life. One of the few things he could recall was that he was born on a Monday. Recognizing the phrase from an English nursery rhyme, a group of transients dubbed him Solomon Grundy. He took to it immediately.

He quickly turns to a life a crime, attracting the attention of Scott, who operated in Gotham during the 1940s as Green Lantern. Grundy proved to be a tough opponent as his body was mainly composed of wood – a substance immune to Scott’s mystical version of the Green Lantern power. He eventually got the upper hand by throwing Grundy under an oncoming train, but not before Grundy murdered several people.

The brute was brought back to life sometime later with a chlorophyll serum and set loose by a mysterious professor. Imprisoned after a rematch with Green Lantern, Grundy eventually broke loose and wrecked the Justice Society of America headquarters in hopes of finding his nemesis. This time, it took the aid of Hawkman and Dr. Mid-Nite to take him down. Scott left Grundy on the Moon, but he soon found a way to return to the Earth, assume a new identity, and continue his private war with Scott and the JSA.

Grundy eventually became an ally of Scott’s daughter, the hero known as Jade, and her second-generation team Infinity Inc. But his affection for her was manipulated by the original Harlequin (no relation to Harley Quinn at all) in Infinity Inc #55; leading to a series of tragic events and the dissolution of the team. Jade and Scott fought with the monster again after the team disbanded, turning him into petrified wood in the process.

In the Legion of Doom 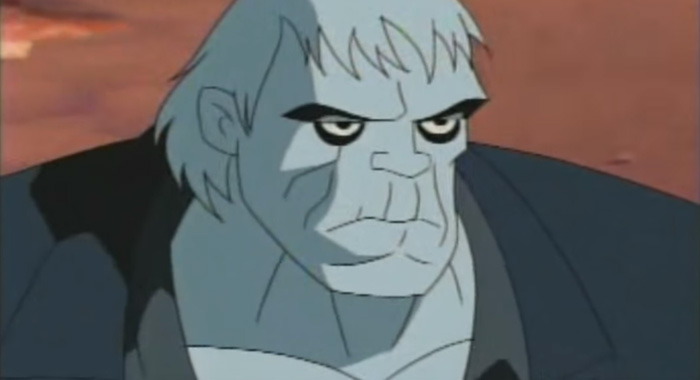 To a generation of kids, Grundy is best recalled as a member of the Legion of Doom on ABC Television’s Challenge of the Superfriends. Depicted in with his classic broad shoulder and rotting coat, he was also a smarter version of Grundy; capable of talking to his fellow villains and orchestrating schemes on his own. Unlike his comic book counterpart at the time – a perennial antagonist for the Justice Society – this Grundy was an on-going adversary of the Justice League.

His presence was so striking that producers of shows like Justice League Unlimited, The Batman and Batman: The Brave and the Bold would include him as a special guest character. Though, his abilities, intellect, relative menace and size would vary as required by the story.

After breaking free of his petrified prison, befriending Two-Face and fighting Batman, Grundy moved from Gotham to the sewers of Opal City. In 1995’s Starman (Vol. 2) #10, the city’s hero, Jack Knight, discovered Grundy had changed into a thinner, childlike version of his former self. Befriending him and nicknaming him “Solly.” Jack introduced this gentle version of Grundy into his odd family of previous Starmen, including his father Ted – a contemporary of Alan Scott – and the alien Starman Mikaal Tomas (imagine a Bowie-esque superhero fallen on hard times). Solly and Mikaal formed a particular bond as pale-skinned outsiders. But their attempts to integrate into Opal City society were cut short when a building collapsed on them. Solly sacrificed his life to save Mikaal despite knowing death would turn him back into Grundy. In Starman #34, Jack enlisted the help of Alan Scott, Batman and another plant-based villain named The Floronic Man to ensure the Solly persona would regenerate, but sadly, the brutish Grundy returned once more.

In a somewhat hopeful postscript, Grundy took a bullet for Mikaal in Starman #49, but claimed he had no idea why he did it.

From then on, the character would re-emerge every so often to battle various heroes like Batman, Superman and Green Lantern. Each time, his appearance and intelligence varied; suggesting a number of resurrections since his time as Solly.

Echoes on The CW 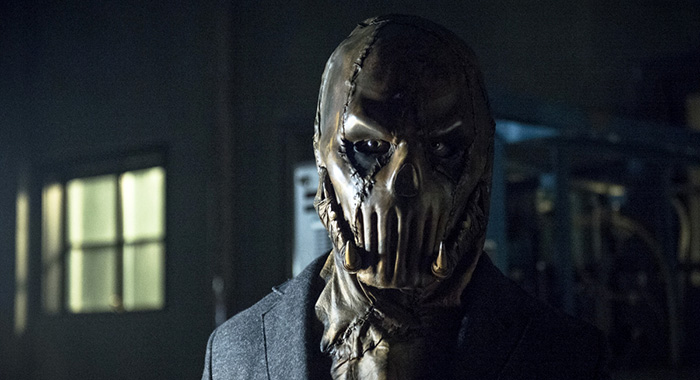 Thanks to Grundy’s storied history, Drew Powell is not the first person to play him in live action. Mickey Morton first took up the role in the infamous 1979 television special Legend of the Superheroes. The makeup effect was surprisingly accurate, but the less said about that, um, roast of the DC Comics characters, the better. John DeSantis would play him for a brief moment in an episode of Smallville, but Grundy – or at least Cyrus Gold – was also a recurring character in the so-called Berlantiverse on The CW.

In the second season of Arrow, Graham Shiels was introduced as “Brother Gold,” a member of Brother Blood’s (Kevin Alejandro) cult and the lone survivor of experiments with the Mirakuru drug. Receiving some enhanced strength and regenerative abilities, Gold helped Blood steal equipment from Queen Consolidated, which would allow the Mirakuru to be produced on a mass scale. Oliver (Stephen Amell) eventually defeated him by causing an acid-filled machine to explode. A subsequent search of Gold’s home revealed a book of poems featuring the “Solomon Grundy” rhyme.

Arrow never followed up on the ideas, presumably as Gotham’s development prevented the series from using several characters tied to the Batman mythos. But as previously lost characters like Deathstroke (Manu Bennett) return to Arrow, perhaps, someday, a Berlantiverse hero will learn about a swamp monster who was “born on a Monday.”

In hindsight, the connections between Butch and Grundy should have been obvious. And while it’s doubtful creator Bruno Heller always meant for Butch to become Grundy, the character’s life lines up with Grundy in surprising ways.

For one, his loyalty and tendency to latch onto others recalls the Grundy of Starman and Infinity Inc. In fact, his loyalty to Fish Mooney (Jada Pinkett Smith) was so unwavering, Victor Zsasz (Anthony Carrigan) brainwashed him into working for Penguin (Robin Lord Taylor). During that time, his loyalty to Penguin was total and complete. He eventually escaped Penguin’s control, but soon found someone to shower his sense of loyalty upon: Tabitha Galavan (Jessica Lucas); and despite finally obtaining a gang of his own (shades of the Superfriends Grundy), he still felt left out when Penguin and the Riddler plot Gotham City’s future.

But it all comes to naught as Barbara Kean shoots him in the face and an overcrowded hospital dumps him into Slaughter Swamp.

Now here’s where it will get interesting. Like so many of Grundy’s lives, will Butch forget all of the people he lost along the way? Will he come to Gotham with an unspecified rage whenever he spots a photo of Penguin? Will he attempt to rebuild his loyalty to Tabitha? Or will Barbara manage to put one over on him, like Harlequin did in the pages of Infinity Inc? 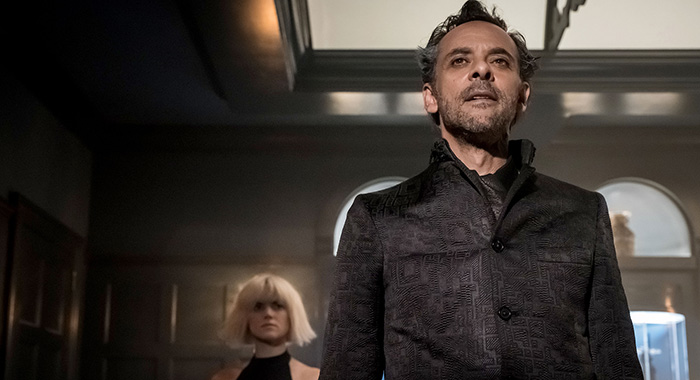 It also remains to be seen if Butch will be a plant-matter zombie. Gotham has managed to power down some of the more fantastical DC Comics characters while retaining a surprising amount of their look and appeal. But a literal zombie is more than the show has attempted. At the same time, the program is going full Lazarus Pit for Ra’s Al Ghul (Alexander Siddig) – suggesting he is at least 2,000 years old – so maybe some of those waters will give Gundy a means of becoming unstoppable.

Or, perhaps, Grundy will just inherit Butch’s knack for surviving terrible things. Although, he might be happy to have his hand grow back.