The Clone Wars Is Coming Back, Predator Promises Plenty of Blood, And More Comic-Con News

Plus Jodie Whittaker hits the reset button on Doctor Who and we meet Stargirl in our Thursday Comic-Con Ketchup.

We’re breaking down the biggest news, announcements, and other happenings coming out of Comic-Con every day, and on opening day it was all about a potty-mouthed sidekick, a reborn Star Wars property, and a brand-new Doctor in the house. Check out the stories below.

“F–k Batman”: The DC Universe Gets Even Darker with Titans

DC Universe fired up Con-goers Wednesday night with its in support of the opening of pre-orders for the subscription streaming service ($74.99/year or, at launch, $7.99/month – if you’re interested). The clear highlight of its presentation – if online reaction is anything to go by – was the new trailer for Titans, a gritty take on the Teen Titans franchise that stars Brenton Thwaites as Dick Grayson (a.k.a. Robin) and Teagan Croft as Rachel Roth (a.k.a. Raven), a girl possessed of a strange darkness. Just how gritty? Well, Robin at one point says “F–k Batman” before beating a bunch of guys into a bloody pulp. The trailer dropped online Thursday morning and the world went wild.

The Cosplayers Are Bringing It 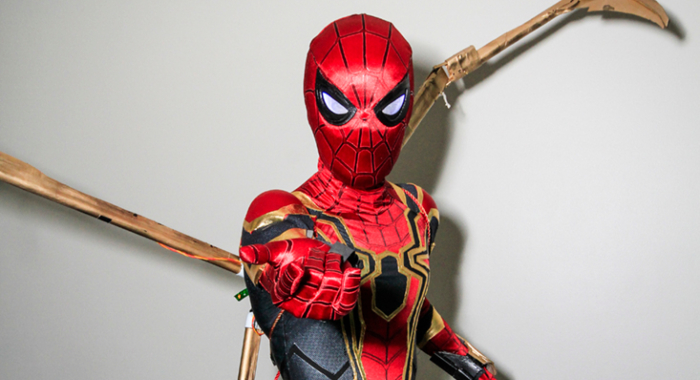 We’re roaming the Convention Center and its surrounds for the best cosplayers at the Con. And even on day one, the creative fans in San Diego are not disappointing. And yes, the now world-famous Infinity War Spider-Man is in town. Check out Rotten Tomatoes’ full Comic-Con Cosplay gallery here.

The Predator Is Definitely Going to Be A Quip-Filled, Violent-As-Hell Shane Black Film

The cast and crew of this year’s The Predator reboot took the stage for the first Hall H panel of the day, hosted by Rotten Tomatoes’ own Grae Drake. And what a cast and crew it was: Director Shane “Iron Man 3” Black was swarmed by stars Sterling K. Brown, Olivia Munn, Jake Busey, Keegan Michael Key, Thomas Jane, Augusto Aguilera, and  Trevante Rhodes, who many will remember as the older Chiron in Moonlight.

The crowd was treated to two extended clips from the movie. The first showed a number of the characters waiting for Olivia Munn’s Casey Bracket to wake after being knocked out – and if you had any doubt that this was a Shane Black movie, those doubts were wiped away by the quick, bleep-filled banter and the big laughs. As Ethan Anderton, an editor and writer at Slash Film put it:

First @Predator clip shows chemistry between the ensemble soldier cast as they wake up a passed out Olivia Munn after some kind of incident involving The Predator. More comedy than I expect. Lots of quick, fast-talking banter as you'd expect from Shane Black.

The second clip was much more traditional Predator fare, showing the new film’s bigger, badder, more predator-y Predator fighting a regular-sized Predator and totally destroying him – the scene ended with the enhanced Predator tearing the other Predator’s head off, along with his spine.

Damn! We just watched a clip of a giant Mega-Predator ripping the head off a regular Predator.
“Well, we got ourselves an R rating, so that helped… And that shot isn’t finished – there’s even more blood coming.” – Shane Black #SDCC pic.twitter.com/bYRqT9UOe5

Another panel highlight? This moment when Sterling K. Brown made a Wookie sound:

Thursday was the first day of Comic-Con, and the first night of Rotten Tomatoes’ live fans vs. critics showdown, Your Opinion Sucks. We witnessed heated debates about Wonder Woman and The Little Mermaid (really, a fan called it Rotten and almost convinced the room she was right!). Rob Liefeld, comic legend and creator of Deadpool, surprised those at the event, and joined a team of fans to sound-off – and compete – against critics in a game called Street vs. Elite (and to take issue with Deadpool‘s Tomatometer score!). You can see the full episode below.

Your Opinion Sucks continues Friday and Saturday night. If you’re in San Diego, doors open for the free event at 4.15pm each night at Bar 207 at the Hard Rock Hotel; if you’re not at the Con, be sure to check back at Rotten Tomatoes for Friday’s highlights, or tune into our live stream on Saturday. You can set a reminder here.

Fans warmly welcomed Doctor Who‘s new Doctor, Jodie Whittaker, and friends to Hall H. While Whittaker made massive headlines by becoming the first woman to play the Doctor, during a press conference before the panel, she was quick to do away with the idea that the Doctor has fundamentally changed with her casting: “I have two hearts; there are really no rules.”

During the panel, however, producer Chris Chibnall and executive producer Matt Strevens indicated that fans should be ready for something new. “There will be little things [fans will] recognize, but what we want to see is where the show goes next,” Chibnall said. “We have 10 standalone stories, and lots of new characters for you to fall in love with. My big message to you is that this year is the perfect jumping-on point for that person in your life who’s never seen Doctor Who. Set them down for Jodie’s first episode and say, ‘See!?’”

Read more about what we learned about the new Doctor and the new season in our expanded Comic-Con coverage of Doctor Who.

The Clone Wars to Return for a Seventh Season

New episodes of animated series The Clone Wars are coming, with Disney showing off new footage at the Clone Wars 10th Anniversary Panel at SDCC. The trailer featured a shot of Ahsoka Tano, Padawan learner to Anakin Skywalker. She told him that it’s been a long time. Chills!

Producer Dave Filoni said that the show is coming to Disney Direct Consumer first, which is Disney’s upcoming streaming service. No signs of exactly when, yet. The new episodes come with high expectations: the original series has a Tomatometer score of 95%.

When asked in a SDCC press conference if he thought Breaking Bad‘s Aaron Paul, who played Jesse Pinkman on the 2008 AMC series, would make an appearance in season 4 of Better Call Saul, star Bob Odenkirk replied, “I do — I’m speaking as a fan.”

After the press room’s laughter died down, Odenkirk elaborated: “Look, here’s what I know: I know that Hank Schrader [played by Dean Norris on Breaking Bad] knows Saul, right? Because when they meet in the hallway, they give each other sh–. They know each other — if you remember the first time [they shared a scene]. So Hank knows Saul. And, I think, because of what Jesse says to Walt[er White (Bryan Cranston)], ‘You don’t need a criminal lawyer; you need a criminal lawyer’ — you know, that line. Obviously, Jesse saw Saul’s commercial on TV. We saw that on Breaking Bad.”

Odenkirk went on to deduce that the commercial wasn’t enough for Jesse to recommend Saul; that he had to have known him by reputation.

Michael Mando, who plays Nacho Varga in Better Call Saul, reminded the room that Jesse worked for Krazy-8 (Max Arciniega) in Breaking Bad, and that Krazy-8 is practically family to Nacho.

Therefore, look forward to a little Paul in your Saul. 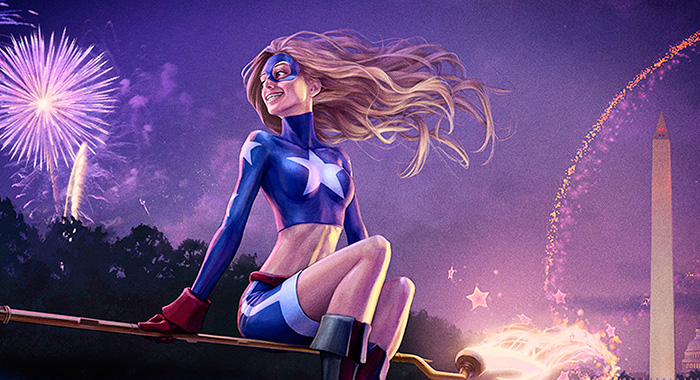 Johns also revealed he will reunite with artist Dale Eaglesham for ongoing comic book series Shazam!, which will debut on November 21. He also premiered a Batman: Three Joker first look by artist Jason Fabok that will be will be published under the DC Black Label imprint. Read more about the DC Universe streaming service here.

A Discovery of Witches Gets U.S. Distributor 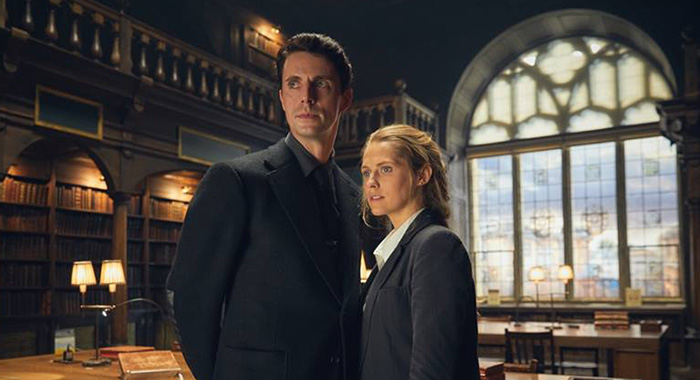 A Discovery of Witches has found a home at Sundance Now and Shudder, the streamers announced Thursday. Based on the bestselling novel of the same name by Deborah Harkness, the eight-episode drama-fantasy stars Matthew Goode (The Crown, Downton Abbey), Teresa Palmer (Warm Bodies), Alex Kingston (ER, Doctor Who), Valarie Pettiford (Being Mary Jane), and Owen Teale (Game of Thrones). Goode plays vampire and geneticist Matthew Clairmont to Palmer’s brilliant historian and reluctant witch Diana Bishop, who stumbles upon a bewitched manuscript that propels her into the heart of a dangerous mystery. The series’ U.S. premiere date is to be determined, but it will air on Sky One and Now TV in the U.K. starting September 14.

Be sure to check out Rotten Tomatoes’ own live event during Comic-Con, Your Opinion Sucks. It’s the ultimate fans vs. critics face off, and you can watch it live in San Diego or on video at Rotten Tomatoes.