Sound off at the critics once again as the ultimate movie and TV debate show heads back to San Diego.

The ultimate Fans vs. Critics face-off is coming back to San Diego! 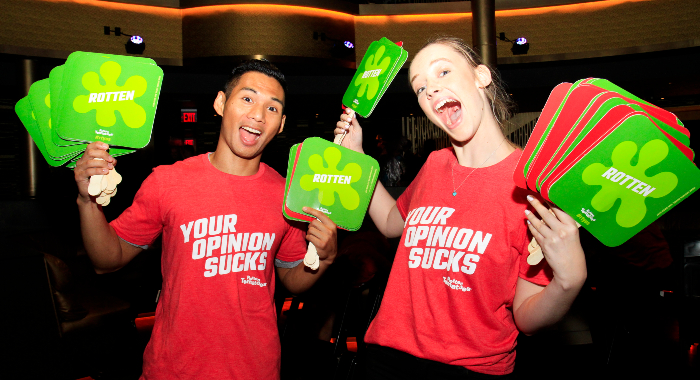 Ever disagreed with the Tomatometer – vehemently? Ever thought to yourself: These clueless critics need a piece of my mind!? Well, Rotten Tomatoes is giving you the chance to give them just that, with three special San Diego editions of our debate-tastic live show, Your Opinion Sucks.

What exactly is Your Opinion Sucks? It’s the live show that gives fans the opportunity to sound off at a panel of  critics, telling them which movies and TV shows they got completely wrong, and reminding them that, yes, their opinion totally sucks. As well as fiery debates and piping hot takes, you can also expect fun games – study up on your Tomatometer stats, kids – and a special appearance or two. All will occur under the watchful eyes of co-hosts and Comic-Con royalty, Mark Ellis and Grae Drake.

Guests are admitted on a first come, first in, basis.

Join the Conversation on Social With #RTYOS 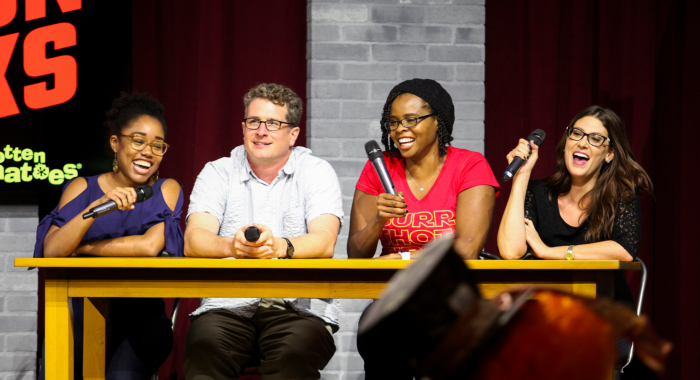 Whether you’re with us live at the Hard Rock or somewhere else during Comic-Con – or heck, you just wanna get the debate started early… like now! – you can join the Your Opinion Sucks conversation by using the hashtag #RTYOS. (That stands for Rotten Tomatoes Your Opinion Sucks, in case you’re wondering). And be sure to be following @RottenTomatoes throughout Comic-Con.

Here’s how to have your say. Pick a topic, movie, or TV show, and then sound off:

“Marvel is marvelously overrated – DC 4 lyfe! #rtyos”
“Why so serious, DC? Maybe lighten up and your Tomatometer will get a tiny bit redder! #rtyos”
“Marvel or DC? Meh. A plague on both their houses. Dark Horse rules. #rtyos”

Watch a Live Stream of Your Opinion Sucks

Mark Ellis
Mark Ellis is a comedian, actor, and stand-up who has played to sold-out shows all over the world and on TV. You might also recognize him as the co-host of Schmoes Know, from his correspondent duties at Rotten Tomatoes, or from his movie show, which has 300K subscribers and 70 million views on YouTube. Mark also regularly appears as a commentator on Spike, MTV, VH1, E!, Reelz, and network programs. He can be seen daily on Collider Movie Talk, and is a weekly regular on Jedi Council.

Grae Drake
Host and journalist Grae Drake is a Senior Editor at Rotten Tomatoes. She lives at the center of the entertainment universe with her highly acclaimed sit downs with Hollywood’s A-list. Her piercing wit and one-of-a-kind expert analysis of all things media have made her a go-to entertainment insider for programs including The View, World News Tonight, Redeye, and Weekend Express, and across multiple TV networks including ABC, Syfy, CNN, and HLN.