The Biggest Moments of the 2020 Golden Globes: Shocks, Tears, and Brutal Zingers

Tom Hanks and Ricky Gervais left folks in tears -- for very different reasons -- as seismic upsets struck in both the film and TV categories.

In a Golden Globes ceremony full of jaw-dropping surprises and bunch of moving speeches (some personal, many political), a few moments stood out from the pack on Sunday evening. From grumpy uncle Ricky Gervais on hosting duty to tears from America’s sweetheart Tom Hanks and Phoebe Waller-Bridge reminding us that Fleabag has a special relationship with a former president, the Hollywood Foreign Press Association’s 77th annual party gave viewers plenty of shocks and awwwws and – host network NBC a few good bleeps.

Read on to learn about those big wins and more of the best moments of the night.

Ricky Gervais Gives Not One F— in His Opening Monologue

It was his fifth time hosting, and Ricky Gervais hit the stage with guns blazing, taking aim at the HFPA, NBC, Felicity Huffman, and many of the guests assembled for the awards ceremony.

“Let’s go out with a bang. Let’s have a laugh at your expense,” he warned, then said that his limo’s license plate was made by Huffman, who served 11 days in jail for her role in the college admissions scandal. Tepid laughter and uncomfortable smiles everywhere.

He called Joe Pesci “Baby Yoda” and the room generally “perverts,” suggesting that Ronan Farrow was coming for them. He said that Martin Scorsese was too short to go on amusement park rides, which The Irishman director agreed with.

Tom Hanks’ face during the monologue was everything.

Gervais plugged his own streaming show, After Life on Netflix, after offering the streaming giant all the awards. Gervais attacked Cats, of course, saying that James Corden is a fat pussy (and also starring in the film) and Dame Judi Dench likes licking her private parts, which he followed with a hairball joke. He paused midway through that last joke because it was so rough he almost couldn’t deliver it.

He accused Apple of running sweatshops in China and name-checked Amazon and Disney in the same breath along with ISIS. His point: winners should keep their speeches short, because out-of-touch actors and filmmakers have no business lecturing the public about politics (which many actors and filmmakers, of course, went on to do later in the program – moments which you can find online but which we’ve left out here).

Shocking Upsets Hit in First Acting Awards of the Night

After insulting them for working with Apple, Gervais turned the stage over to Jennifer Aniston and Reese Witherspoon. What were expected to be easy wins for Bill Hader for Barry and Jared Harris for Chernobyl, the first two awards of the night, for Best Performance by an Actor in a Television Series – Musical or Comedy and Best Performance by an Actor in a Limited Series or Motion Picture Made for Television, went instead to Ramy star Ramy Youssef and Russell Crowe for The Loudest Voice.

“This is thanks to God and Hulu. Look, I know you guys haven’t seen my show. Everyone’s like, ‘Is this an editor?’” Youssef joked, in an earnest speech that helped cut the tension in the room. “My Mom also, by the way, was rooting for Michael Douglas. Egyptians love Michael Douglas. I don’t know if you know this.”

Crowe hadn’t flown in for the event. Aniston noted that he remained in Australia to protect his family from bushfires and delivered a message from him attributing the devastation in his country to climate change.

The surprises would continue in the male acting categories with Chernobyl’s Stellan Skarsgård, who attributed his win to his eyebrows, taking Best Performance by an Actor in a Supporting Role in a Series, Limited Series or Motion Picture Made for Television, a category most prognosticators expected to go to anyone but him. 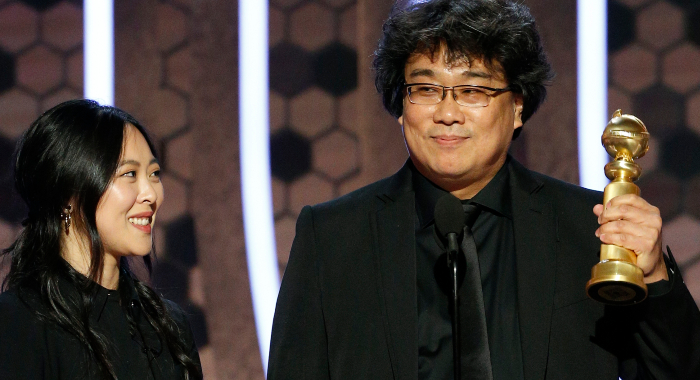 In a night full of surprises, one of the least shocking moments came when Korea’s Parasite was named Best Motion Picture – Foreign Language. The movie, which is an Oscar frontrunner for Best Picture, was as sure a thing as you could get. Nevertheless, the win did give us a surprisingly touching moment (at least if you haven’t seen moment-making writer-director Bong Joon-ho on stage before). Joon-ho took the stage with a translator and delivered one of the biggest applause lines of the night, telling the audience and the world watching: “Once you overcome the one-inch–tall barrier of subtitles, you will be introduced to so many more amazing films.” On a night when foreign-language film contenders included incredible movies like Pain and Glory, Portrait of a Lady On Fire, The Farewell, Les Misérables, and his own Parasite, the point hit home.

Buzz, Woody, and the Gang Just Got Put Back In Their Box 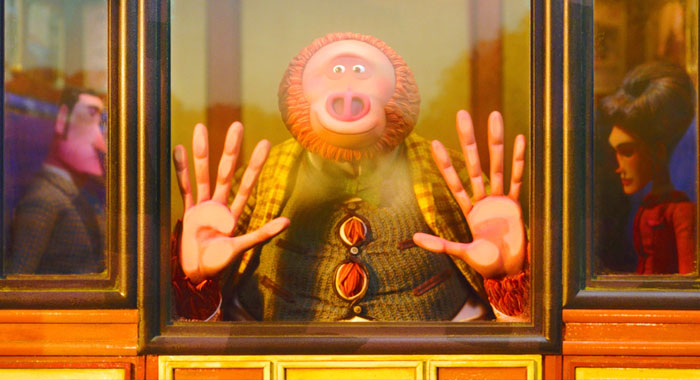 “Well, I’m flabbergasted,” admitted Missing Link co-director Chris Butler when he accepted the award for Best Feature – Animated with co-director Arianne Sutner. So were we. This was Toy Story 4’s award to lose: The Certified Fresh Pixar sequel is considered a lock for the Oscar in the category, and was a huge smash with audiences and critics. But it was the underseen Missing Link, the stop-motion Big Foot movie from Kubo and the Two Strings and Coraline studio Laika, that won the Golden Globe and made this year’s animation races a touch more exciting moving forward.

Tom Hanks Doesn’t Usually Get This Emotional, He Swears

Tom Hanks proved why he’s the most liked person in Hollywood (the world?), delivering one of the night’s most moving speeches while receiving the Cecil B. DeMille award from Charlize Theron for “outstanding contributions to the world of entertainment.” Hanks started things off emotionally, struggling to speak as he shouted out his wife and five kids, then delivered some laughs (to Scorsese: “Boy, let’s see the outtakes from that movie, by the way”), before closing with a few more almost-tears (“I have checked the gate”). “I swear to God I’m not nearly this emotional at home,” he said at one point. We’re glad he let himself go this time.

In her acceptance speech for Fleabag’s win for Best Television Series – Musical or Comedy, series creator Waller-Bridge reminded everyone that she’s as much of a fan of President Barack Obama as he is of her show.

“Personally, I’d like to also thank Obama for putting us on his list,” Waller-Bridge said, referring to the president’s end-of-the year list. “And as some of you may know, he’s always been on mine. And if you don’t get that joke, please watch season 1 of Fleabag really, really quickly.”

The NSFW scene she’s talking about can be seen on YouTube.

Next up are my favorite movies and TV shows of 2019. Of course, there’s also American Factory, a film from our own production company, Higher Ground, that was recently shortlisted for an Oscar. Here’s the full list: pic.twitter.com/PEcgwotcxm

There was no direction needed for Sam Mendes to act genuinely shocked after winning Best Director – Motion Picture for 1917: he was visibly shook. So was much of the room, who were likely expecting Quentin Tarantino, Bong Joon-ho, or the man Mendes himself said in his speech stands above all others, Martin Scorsese, to take the prize. Mendes’ win for Best Director was only the beginning of a surprisingly good night for his WWI drama. The movie would go on to win for Best Motion Picture – Drama, too, beating out The Irishman and Marriage Story. Opening wide in theaters next week, a strong showing at the Box Office could put the film in the frontrunner seat for Best Picture at the Oscars.

And… Olivia Got “A Little Boozy,” Again

After confessing she got “bladdered” at last year’s Oscars, Olivia Colman confessed – on stage – she was “a bit boozy” tonight when she won her award for Best Performance By An Actress In a Television Series – Drama for The Crown. We thank her for the helpful reminder – on behalf of a number of presenters and recipients this evening – the booze was flowing in the ballroom.