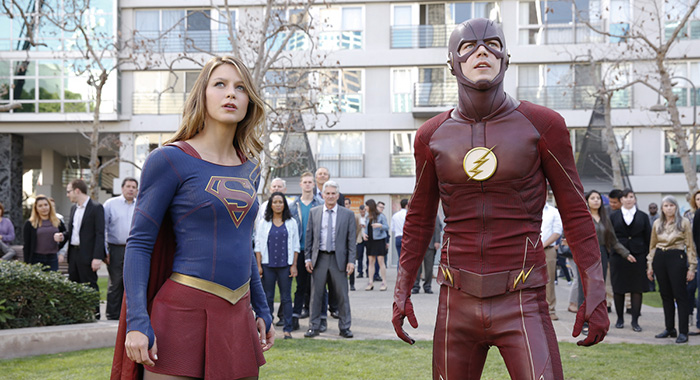 Sunday was all CW all the time for the Television Critics Association. CW President Mark Pedowitz spoke about renewed and upcoming series, and producers on panels for Riverdale and the DC superhero shows offered news on their other series, and all before the Golden Globes red carpet began.

Greg Berlanti confirmed the longstanding rumor that The Music Meister would be the villain in the Supergirl-The Flash musical crossover episode. Neil Patrick Harris voiced Music Meister in animated series, but Berlanti said they were not out to casting, so could not decide on Harris or a new actor. Berlanti and producer Sarah Schechter said they are finishing the script this weekend and songs have not been decided yet. Andrew Kreisberg added that the music would be intrinsic to the ongoing stories, with both Barry and Kara a pivotal crossroads in the two-part episode. Kreisberg also confirmed Parasite and Livewire returning this season.

Constantine Is Back on CW Seed

The CW announced a new DC animated series on CW Seed. Constantine brings back Matt Ryan as the voice of John Constantine. Berlanti’s DC team and David S. Goyer, who created the live-action NBC series Constantine, are producing five or six 10-minute episodes to premiere in the 2017-18 season. Later, Berlanti added that that he’d just been told about Constantine on Friday so had not thought about other characters from the NBC series returning. Pedowitz also said he’s open to having Ryan reappear on other DC shows, as he did for an episode of Arrow.

Executive producer @GBerlanti and writer David S. Goyer will be reanimating #Constantine on @cwseed, with @mattryanreal casting the spells! pic.twitter.com/85ltkqHE1y

Paul Hewitt, EVP of Communications for the CW, began the day by announcing early renewals for Arrow, The Flash, Supergirl, Legends of Tomorrow, Supernatural, Jane the Virgin, and Crazy Ex-Girlfriend. Pedowitz said he’d keep renewing Supernatural “as long as the boys want to do it.” Keep up with renewals and cancellations on our list of renewed and canceled series.

CW Wants to Renew The 100 and iZombie Too

The 100 and iZombie return this spring, and CW has not announced renewals yet. Pedowitz hopes to renew iZombie, having seen 12 rough cuts already, and says The 100 only needs to keep being as good as it is every year. During an iZombie panel, executive producer Rob Thomas said he was building towards a fourth season he hopes to make.

Why the Charmed Remake Is a ’70s Period Piece

Last week, The CW announced a remake of the WB series Charmed, from Jane the Virgin creator Jennie Snyder Urman. Today, Pedowitz said that it was Urman’s idea to make it a ’70s period piece, which will be self-contained from the 1998-2006 version. Pedowitz said “we’ll see” if original Charmed cast members could be incorporated as the series goes on. For now, it is a standalone separate series.

The O.C., Gossip Girl and Chuck creator Josh Schwartz and Stephanie Savage are developing a Dynasty reboot for The CW. Pedowitz confirmed that the new series would retell the story of the Carringtons, as opposed to series like Dallas, which incorporated the original generations of their families. He also said the reboot would introduce new characters. Pedowitz has not seen the script yet.

The Flash producer Andrew Kreisberg announced Gorilla Grodd would return in a two-parter for episodes 13 and 14, which would take place in Gorilla City and Earth-1. He also announced Keith David as the voice of Solovar, another sentient gorilla.

Andrew Kreisberg said that Black Flash would appear on multiple DC shows, fulfilling his Grim Reaper function from the comic books. He didn’t rule out actor Teddy Sears returning, but acknowledged Sears is busy on 24: Legacy.

Greg Berlanti said Alex Danvers’ coming out story was first proposed last season, but he felt they’d have more time to do it justice this season. Already, fans have shared emotional stories of how it impacted them. One comic shop retailer shared the story of a fan who was suicidal until seeing Supergirl. Berlanti related to her. “I wish that I’d had some of these kinds of things when I was a kid,” he said. “It’s nice to be a part of that, so I wish her the best.”

So, I want to tell you all what happened in the store today. It's probably the single greatest moment I have ever experienced working here.

Another story of a Supergirl fan harassed on a Delta flight for watching the coming out episode surfaced. Delta upgraded the passenger, and Schechter was gratified the show could empower fans. “It’s everything,” Supergirl E.P. Sarah Schechter responded. “It’s why we do it. Both [stories] made me cry.”

So, yesterday on my flight to Vancouver I was watching Supergirl, more specifically, the episode where Alex comes out to Kara.

While on the panel for the Archie based series Riverdale, CCO of Archie Comics Roberto Aguirre-Sacasa said the company has plans for new series about other Archie properties, including Sabrina the Teen Witch as a dark horror show akin to Rosemary’s Baby, very different than the half-hour Melissa Joan Hart comedy version that aired in the ’90s.

Frequency and No Tomorrow Could End Online

Neither of The CW’s new fall shows Frequency and No Tomorrow were renewed today. Pedowitz said that both series were near wrapping for the season, so could be out of production before news of cancellation hit. However, Pedowitz has plans to film tags for the CW’s digital platforms that would wrap up the shows should they be canceled. Neither show received orders beyond 13, though Pedowitz said he always intended them to be 13-episode seasons to make room for Riverdale and returning iZombie and The 100 this year.

Greg Berlanti is producing the Black Lightning series for Fox. He said those characters would probably not crossover onto the CW Arrowverse shows. “If we’re lucky enough that that show exists, I don’t think those worlds would cross over,” Berlanti said.

The CW’s new series Riverdale began its life as a movie pitch. Aguirre-Sacasa had discussed Warner Bros. executive’s pitch to make an Archie time travel movie. On today’s panel he said one suggestion was to have Louis C.K. play Archie in a movie. The Riverdale you will see on The CW starting January 26 features teenage Archie, Jughead, Betty, and Veronica. (Look for RT’s interviews with cast before the series premiere.)

Greg Berlanti said he hopes to have Tyler Hoechlin return for more episodes of Supergirl as Kara’s cousin Kal-El/Superman. Getting DC to allow Superman to appear on the show was already a big hurdle, but Berlanti hasn’t ruled out a Superman show. “In success I think all those things are possible,” Berlanti said. “I’m always the guy who says yes if there seems to be an appetite for it, and the people involved are really nice.”

With The Vampire Diaries ending this year, Pedowitz dodged questions about Nina Dobrev returning by saying, “Julie [Plec], Kevin [Williamson], the studio, and CW promise a fantastic series finale.” When pressed again after the finale on any perceived ambiguity on Dobrev returning, Pedowitz repeated the same line.