What does this mean for Kara, and who are Teri Hatcher and Kevin Sorbo playing? 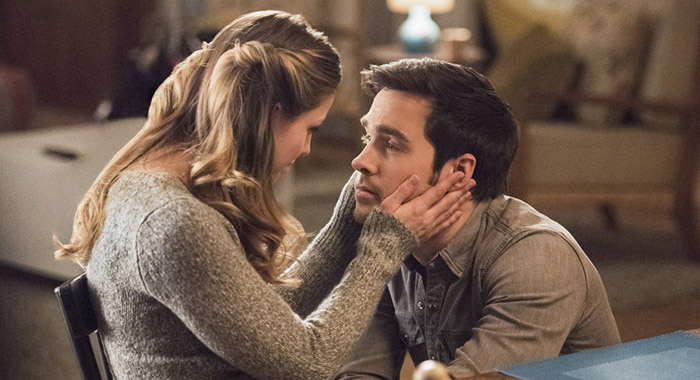 All hail, the Prince of Daxam.

#Supergirl #2×15 Mon-El's been The Prince of Daxam all along. Curious to learn exactly how much of his story he told Kara is actually true!!

The scene next week has guest stars Teri Hatcher and Kevin Sorbo having dinner with Kara and Mon-El, calling him the Prince of Daxam. Since they were introduced on their own ship as “your highnesses,” that would make them the king and queen and therefore Mon-El’s mom and dad!

"Hail Mon-El. Prince of Daxam." karamel are having a family dinner with the mon-el's parents aksjshs when's the wedding? @SupergirlStaff pic.twitter.com/GvXS8NKm30

@ComicBook @TheCWSupergirl Fairly certain they're the King and Queen of Daxam and they're looking for the Prince, being Mon-El.

WOW, they've already exposed that Mon-El's parents are gonna arrive & that he's the prince of Daxam in the next "ep" PROMO?!?! #Supergirl

LOIS LANE AND HERCULES ARE MON-EL'S PARENTS AND THEY'RE COMING FOR HIM OMG! #PRINCEOFDAXAM #Supergirl

Karamel (that’s Kara and Mon-El)  shippers are excited there’s even more to their relationship.

MY PRINCE OF DAXAM HAS PROBABLY HAD 100s OF WOMEN & I BET MY LIFE HE NEVER LOOKED @ THEM THE WAY HE LOOKS @ KARA @SupergirlStaff #Karamel pic.twitter.com/q0YXVuaFdj

Some are worried though. Kara already had a hard time seeing past her Daxamite prejudices. This could be too much. But likely her comment “This changes everything” is taken way out of context in the promo. It could change everything for the better. Or she could be talking about taco day at the DEO cafeteria.

uh oh kara is mad that she found out mon-el is a prince of daxam ?

Not everyone is on the Karamel ship though.

Yes kara finally finds out mon el is the prince of daxam. I really hope they end up braking up.

Mon-El has had many backgrounds in the comic books, including different names like Lar Gand, Halk Kar, Valor and M‘Onel. His home planet has been alternatively called Thoron. Some Supergirl fans called this a while ago.

Finally, the theory has been confirmed. Mon-El is the prince of Daxam. #Supergirl

why is anyone shocked that mon el is the actual prince of daxam and not a servant? cause i called that months ago. and i do mean months ago

@nerdhalfway villains. lol we were right about him being the prince of daxam haha

we all knew he was the prince of Daxam

Knew Mon-El was the prince of Daxam, guessed it right ??? #Supergirl

Not quite everyone though:

Finding out Mon-el is the actual Prince of Daxam:#Supergirl pic.twitter.com/KwkPp1M719

I am shocked by the news that #MonEl is the prince of #Daxam, but at the same time happy for the first appearance of #darrencriss

Some still don’t want to believe any of it.

i know it! I know that bastard is lying!

What do you think? Did you predict Mon-el was the prince? Will this make Kara and Mon-El stronger or tear them apart? Vote in our poll and tell us in the comments.

Supergirl returns March 20 at 8/7 C on The CW and crosses over with The Flash for a musical episode on March 21. Read Rotten Tomatoes’ interview with Chris Wood here.