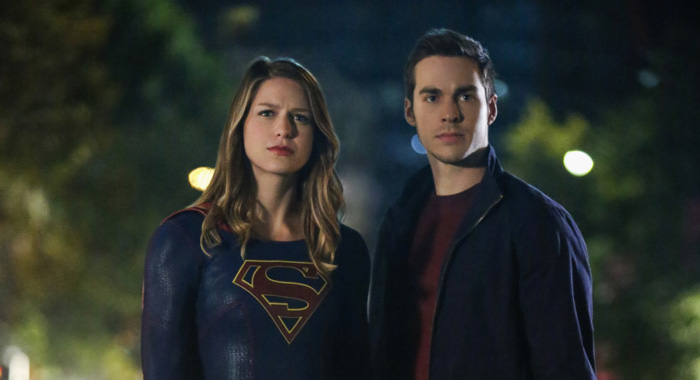 It must’ve been hard to come up with a character Supergirl (Melissa Benoist) didn’t like. She’s nice to everybody, even her tough-as-nails former boss Cat Grant (Calista Flockhart).

But when Mon-El (Chris Wood) landed on Earth, a descendant of Krypton’s rivals on Daxam, Kara distrusted him and bickered with him incessantly. It turns out, of course, that Kara and Mon-El have more in common than she thought, and she’s now teaching him how to use his Daxamian powers to help people on Earth.

Wood spoke with Rotten Tomatoes before the 2017 return of Supergirl on The CW. He wasn’t allowed to talk about the musical crossover with The Flash, but discussed upcoming villains and Mon-El’s path to being hero.

At the Television Critics Association, producers Andrew Kreisberg had said that Livewire and Parasite would return. The Vampire Diaries also promises that fan-favorite characters will return for the final season, and some sign of Wood’s villainous mutant witch Kai would definitely make a lot of TVD fans happy.

Read on to learn more about Wood, his superhero status, and his other projects. 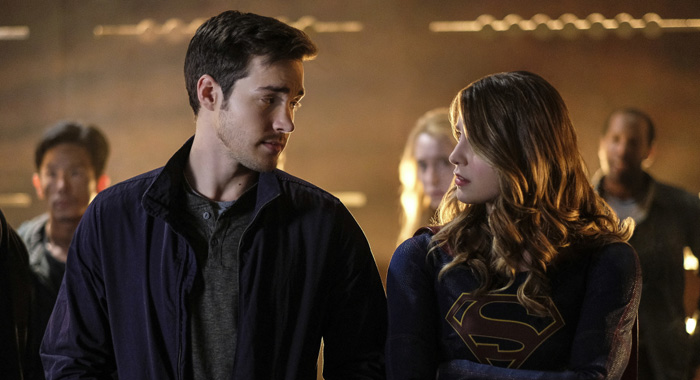 Fred Topel for Rotten Tomatoes: Was a romance with Kara always the plan when you got the role of Mon-El?

Chris Wood: Yes, it was. That was part of the initial projection for the character that Greg [Berlanti] and Andrew Kreisberg told me about when I sat down with them about the role.

RT: Was it fun playing the “will they/won’t they” when you knew where it was going?

Wood: Oh sure. There’s a good deal of that throughout the whole season. I know where we left at episode 8; there’s sort of a big cliffhanger. They kiss, but then they didn’t talk about it really honestly, so now we’re wondering where that leaves them. It takes them another few awkward encounters before they’re able to figure that out. Like any good love story, it’s a bit of a back and forth.

RT: Had you seen the season 1 finale with the ship landing before you got the role?

Wood: No, I had not. That was something I did once I was talking to them about the role.

RT: Should you be called upon to sing in the musical episode, have you any experience singing?

Wood: [Laughs] Yes, I came from the theater. I did a lot of musicals growing up. 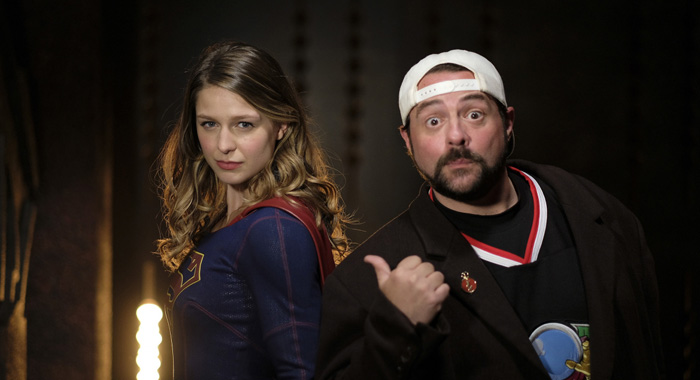 RT: Where exactly does Monday’s episode pick up?

Wood: It’s directed by the brilliant Kevin Smith. It’s a really solid adventure episode where Kara and Mon-El end up traveling to this other place to try to locate this girl. They end up exposed to this red sun which sucks their powers away, and they’re essentially human while they’re there. They’re forced to deal with everything in a slightly different way than they’re used to. It puts them in a nice rapport. It’s very funny and sweet and touching. I think it’s going to be a nice jolt back into the momentum of the season.

RT: Now that Mon-El has had a taste of how good heroism feels, is he jonesing for more?

Wood: Yeah, I think that’s definitely something that he’s going to experience. Every time he’s gotten to see Kara in action, it has a propelling effect on him where he is inspired. That part of him, whether or not — I don’t know if everyone sees it, but there’s something in him that Kara sees, that he can do this. Not that she needs to convince him, but he needs to find that place within himself just like he did. Because she also didn’t just pop down and do this the whole time she was on Earth. She took having an encounter and actually trying to help for the first time, realizing she really wanted to do this.

He still needs to have that ah-ha moment. His isn’t a huge stopping a jet from flying into a bridge moment. His is a series of small inspirations and failing a few times. Ultimately, that thing that Kara sees that makes her think that he can do this is going to be the thing that eventually will wake up. This is one of the steps towards that. 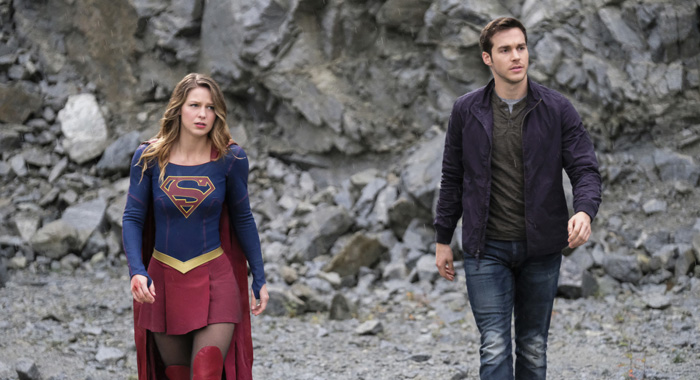 RT: Will he have more relapses where he falls back into using his powers for self-interest?

Wood: Not necessarily that he goes all the way back to there, but a couple steps forward, a little step back. He still has instincts from what he was used to being while growing up. On Daxam, he’s got some habits that just take time to work through. As long as she’s patient and he still wants to help out, everyone will be fine. But it is a TV show so there will be drama.

RT: Do you remember doing the body scan for your digital double for Supergirl?

Wood: Oh yes. I’ve done many body scans. Every time your character fights in a different look, they’ll rescan you. Because my character has taken so long to get a super suit, every time Mon-El fights, he’s in something different. I think I’ve done 11 body scans by now. I did three last week because I have a bunch of different looks for one episode. 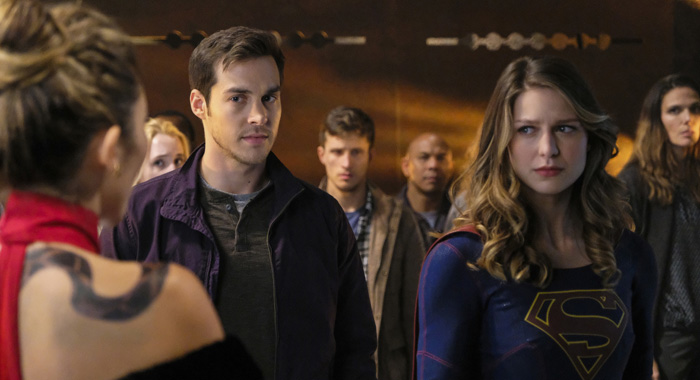 RT: You fought Parasite. When Livewire returns, is she a match for Mon-El?

Wood: I think when Livewire comes back, she’s a tough one to deal with. You just hope that everyone’s got their full capabilities when they finally face off with Livewire so that they’re able to send her back where she’s supposed to be.

RT: And Cyborg Superman is still out there.

Wood: He sure is. There’s a lot of threats out there right now. They’ve definitely got some encounters along the way as the season picks back up.

Wood: [Laughs] Mon-El and Kara have a bit of ping pong. It takes them a second to work this out and Eve is definitely still at CatCo and around, so she’s someone that could definitely factor into that. 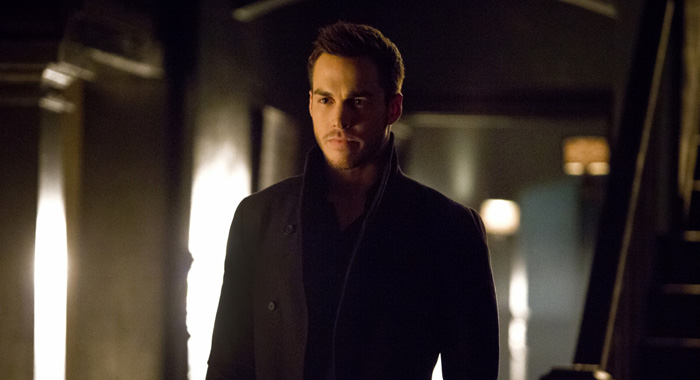 RT: Are the visual effects on Supergirl any comparison to The Vampire Diaries?

Wood: Every year there’s big steps forward. I just watching Star Wars yesterday — because I am a nerd and I’m obsessed. Looking back even to those graphics from the [1997] rereleases of the original, it’s come such a long way. Our television show has higher quality CGI than some of those features, and it wasn’t that long ago. It’s always cool to see what they’ve done with the digital version of you that you didn’t even have to go to set for.

RT: Could we see you on Vampire Diaries again?

Wood: [Laughs] I don’t know. I know there are some rumors circulating about his return. I don’t really know much about it to be honest with you.

RT: Given that it’s the series’ last season, would it be satisfying for you to get one more shot at Kai?

Wood: Hypothetically it would be a fantastic thing. 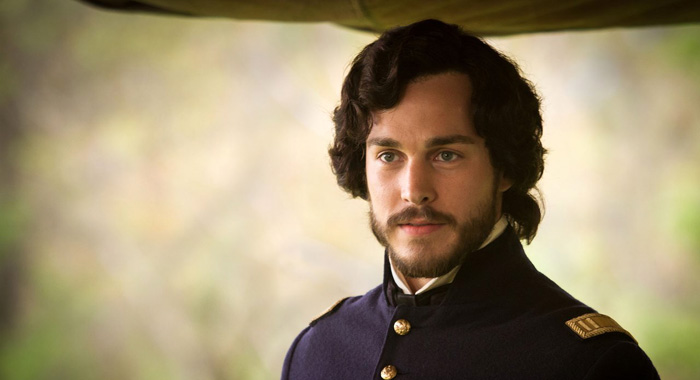 RT: Whot are you playing on Mercy Street?

Wood: I play Captain Lance Van Der Berg, who’s a Union captain who ends up staying with the Confederate family who’s been taken over by the army when they come into the city in Virginia. He strikes up a romance with the youngest daughter in the house, which obviously causes some issues for the family. I will be hard to recognize in my curly brown locks and my beard.