Netflix shocks everyone with The Cloverfield Paradox, and Donald Glover's young Lando Calrissian makes quite the impression. 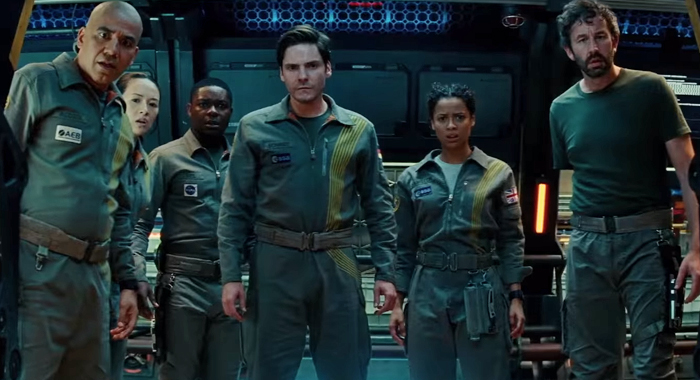 Movie trailers have become a tradition for the Super Bowl, but it’s not every year that a movie as big as Solo: A Star Wars Story holds back footage until the NFL championship event, just a little over three months before its release. And yet, the first teaser for the Han Solo origins movie wasn’t even the biggest shocker of the night for film fans. That distinction goes to Netflix for confirming its acquisition of the third Cloverfield movie in a teaser that also revealed the film’s official title — The Cloverfield Paradox —  and announced that it would be available to watch right after the game. You were stunned, and so were the pros. See how the critics reacted to these and other Super Bowl trailers below.


The irony about the hype for this trailer is that nobody is really talking about the content of the teaser or the movie it’s selling. Reactions were all about the history-making release strategy, which could be a game-changer. Netflix itself was clearly aware of the magnitude of the bold move, as indicated by its official Twitter account.

The really smart Cloverfield play is that everyone watching after the game will be (a) soused and (b) happy to be avoiding This Is Us.
– Alissa Wilkinson, Vox

I love how the series changes the game every time out of the gate. Next they’ll reveal you’ve already seen Cloverfield 4, it came out 35 years ago.
– Alex Zalben, TV Guide

I think the next Cloverfield marketing stunt is to *retroactively* make something a Cloverfield movie. Like on Oscar night, J.J. Abrams gets on stage and is like… “Guess what? There was a *fourth* Billboard outside Ebbing, Missouri until the Cloverfield monster knocked it down.
– David Ehrlich, IndieWire

I am as excited as everyone else for the new Cloverfield film tonight, but this, on Super Bowl night, is another nail in the coffin for theatrical, yes?
– Tomris Laffly, Film School Rejects

Imagine a glorious world in which Cloverfield convinces us to end our obsession with trailers.
– Conner Schwerdtfeger, CinemaBlend

The Cloverfield Paradox is the philosophical term for when you think it’s really cool Netflix is surprise-premiering a movie after the Super Bowl yet you don’t want to watch it.
– James Poniewozik, New York Times


This was just a teaser for a trailer scheduled to debut tomorrow, but it was enough to get people excited. Well, excited for one thing, at least: Donald Glover as a young, suave Lando Calrissian.

I joked that maybe they were just gonna rename Solo “Lando” but maybe they are???
– Katey Rich, Vanity Fair


What aired during the game was just a teaser for a full trailer that was posted online, and for some critics, it served to remind them how badly they needed another M:I movie from Christopher McQuarrie.

Best trailer of the night so far has been Mission: Impossible – Fallout. Fight me.
– Matt Goldberg, Collider

After this, Mission: Impossible – Fallout is now my most anticipated movie of 2018. And it’s not close.
– Sean O’Connell, CinemaBlend

I will never not be excited about a Mission:Impossible movie.
– Chris Nashawaty, Entertainment Weekly


And lastly, we have Skyscraper. Nobody seems to be particularly excited by the premise of the film — or the idea of another action flick starring Dwayne Johnson — but let’s be honest. This movie just begs to be compared to a certain older action flick set in an office high-rise, and pretty much everyone picked up on that.

I thought Skyscraper was a disaster flick. Didn’t realize we’re finally getting The Rock in a Die Hard knockoff. Also I guess they finally made that “Die Hard in a building” movie someone pitched de Souza.
– Brian Collins, Birth.Movies.Death.

$10 the pitch for Skyscraper was “Die Hard outside of a building.”
– Sam Adams, Slate

What was the pitch for #Skyscraper? ‘It’s like Die Hard in a … wait.
– H. Perry Horton, Film School Rejects

So Skyscraper looks a lot like Die Hard in a skyscraper… oh wait…
– Max Evry, ComingSoon.net

For a full roundup of all the movie and TV trailers that aired during the Super Bowl, pop on over to our spiffy poll here.