STEVEN SPIELBERG SAYS WE MIGHT GET A FEMALE INDIANA JOAN 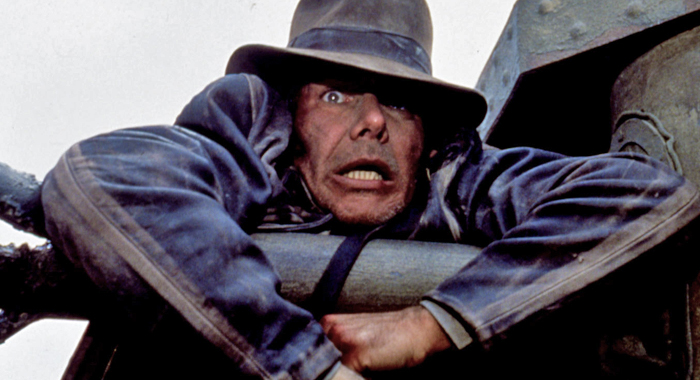 Next April, Steven Spielberg is going to start filming the fifth Indiana Jones, which is expected to be Harrison Ford’s last film as his classic 1930s adventurer archaeologist, and which will be released in theaters on July 10, 2020. That invites questions about what the franchise will become after 2020. Will there be a new actor who reboots Indiana Jones? Will Disney and Lucasfilm just stop making Indiana Jones movies? Is there a third option? Speaking to the British tabloid newspaper The Sun, Steven Spielberg implied the answer might just be a gender change to a female Indiana Jones. Reportedly, Spielberg said, “We’d have to change the name from Jones to Joan. And there would be nothing wrong with that.” (The story as it ran in The Sun has been picked up by mainstream entertainment news outlets like The Hollywood Reporter,  Deadline, and Vanity Fair so it appears that the quotes are accurate.) All of this leads to the next question: which actress currently working in Hollywood would make a good Indiana Joan? Obviously, Alicia Vikander, the new Tomb Raider (and the franchise Indiana Joan would be directly competing with), is off the table, so who else is there?

The 2016 reboot of Ghostbusters didn’t lead to the franchise’s revival the way those involved probably hoped, which also meant that a few of its stars didn’t receive the big screen career bump they might’ve otherwise received. Specifically, Saturday Night Live star Kate McKinnon remains on the periphery when it comes to feature films (this August’s The Spy Who Dumped Me is McKinnon’s next lead role). The latest creative type hopping on the Kate McKinnon bandwagon appears to be British director Danny Boyle (Trainspotting, Slumdog Millionaire). Although it’s still true that Boyle will start filming James Bond 25 later this year, he’s also squeezing in an untitled musical that will start filming soon. Kate McKinnon is the third talent to join the untitled musical set in the 1960s/1970s after Lily James (Baby Driver, Downton Abbey) and Himesh Patel (TV’s EastEnders).

2. GUILLERMO DEL TORO LANDS NEW DEAL WITH STUDIO BEHIND THE SHAPE OF WATER

Director Guillermo del Toro has had so many unrealized film projects that there is a Wikipedia page devoted specifically to the subject, and it has over 25 entries. Many of these are projects that GDT had set up at Universal Pictures, the studio behind Hellboy II: The Golden Army and Crimson Peak. One of them was a remake of Creature from the Black Lagoon, and when that didn’t happen, del Toro eventually made The Shape of Water for Fox Searchlight instead, and the rest is now Academy Awards history. Taking a chance on del Toro’s crazy “Beauty and the Fish-Beast” love story may have been a huge win for Fox Searchlight, where Guillermo del Toro has now signed a new production deal, which will shepherd new “genre feature content like horror and science fiction.” The first project set up under this new deal is called Antlers, about “an elementary school teacher who takes in a troubled student keeping a mysterious and deadly family secret,” from director Scott Cooper (Crazy Heart, Hostiles, Black Mass).

Last year, Master of None costar Lena Waithe made history by becoming the first African American woman to win an Emmy for Outstanding Writing for a Comedy Series. Of course, by that point, Waithe had also already wrapped her supporting role in last weekend’s Ready Player One. That film serves to further raise Waithe’s profile, and talking to The Hollywood Reporter this week, she talked about what her dream project right now is, and the answer was perhaps surprising. Lena Waithe would like to adapt After All, the 1995 memoir and autobiography by groundbreaking 1960s and 1970s TV sitcom star Mary Tyler Moore. She said, “I don’t think people are expecting that from a black lesbian from the south side of Chicago. But, I read her autobiography more times than I can count… I feel like, I want to tell her story. That is what I want to d., I’m only concerned with doing what I want to do. I don’t want to follow a certain path. I just want to just make dope s—.”

5. THE LAST STARFIGHTER REMAKE — AND SIMILARLY-THEMED ARMADA — TAKING OFF

The box office success of last week’s Ready Player One (already $241 million worldwide) is quickly having an impact on other projects. Author Ernest Cline’s second novel Armada similarly heavily involves pop culture references, and also has a premise similar to the 1984 science fiction film The Last Starfighter. In that film, an alien race uses video games to find quality pilots for recruitment in the cosmic war they’re engaged in. Want to guess what two titles moved forward in development this week? Screenwriter Gary Whitta (Rogue One: A Star Wars Story) teased Twitter with concept art from a remake of The Last Starfighter that he’s apparently now working on. As for Armada, screenwriter Dan Mazeau (cowriter of Wrath of the Titans), who’s working on The Flash and a Van Helsing reboot, is also now working on that film for Universal Pictures and one of the Ready Player One producers.

Generally, The Weekly Ketchup tries to avoid “rumors”, but every once in a while, an unconfirmed rumor seems like it might be likely enough to be worth reporting. This story comes from The Playlist (and before that, the Meet the Movie Press podcast), which reported that Matt Damon may have turned down playing one of the villains (or the villain) in the sequel to last year’s Spider-Man: Homecoming (7/5/2019). We don’t yet know which villain (or villains) will be featured in next summer’s sequel, but it’s been known for a while now that two of the long-running villains Sony wants to add to their Spider-Man movies are Mysterio and Kraven the Hunter. Damon seems an unlikely choice to play Russian villain Kraven, so it might be Mysterio he turned down. If not Mysterio or Kraven, which Spider-Man villains would you like to see featured in next summer’s sequel? Someone new, or one we’ve already seen?

As dialogue in the film community has focused more and more on female representation behind the camera, one of the key subjects has been the concept of white male directors “failing upwards“, and white privilege in general. A frequent target in all of this has been director Colin Trevorrow, who landed the plum project Jurassic World after directing just one indie film, 2012’s Safety Not Guaranteed. Trevorrow did not return for this summer’s Jurassic World: Fallen Kingdom. The movie he directed instead was last summer’s The Book of Henry, which was both a box office bomb (just $4.5 million) and a critical failure with a Rotten Tomatometer score of just 20%. Well, guess who’s still failing upwards? Steven Spielberg has confirmed that Jurassic World 3 (6/11/2021) will be written and directed by none other than Colin Trevorrow.

In the sea of petitions that exist on the internet, every once in a while there’s one that actually stands out enough to attract mainstream attention. Currently, there is a petition that is just over 500 votes shy of its target goal calling for a Star Wars casting change, and boy, is this one a doozie. The petition calls for Lucasfilm to replace the late Carrie Fisher as Princess Leia in Star Wars Episode IX (12/20/2019) with Meryl Streep, who played a fictionalized Carrie Fisher in 1990’s Postcards from the Edge. Mark Hamill responded to a question about the petition, saying, “I think it would be tough recasting because she’s so indelibly linked to that character… They’ve already ruled out the idea of computer generating her performance like they did with Peter Cushing, so gee, that’s got to be a really, not an insurmountable problem, but … I know the script had been developed enough so when we lost her they had to go back to square one. She’s irreplaceable as far as I’m concerned.”

1. DWAYNE JOHNSON MAY NOT RETURN FOR FAST & FURIOUS 9 DUE TO FEUD WITH VIN DIESEL

In 2016, we first heard about possible friction between Fast & Furious franchise stars Dwayne Johnson and Vin Diesel. Some of what we’ve heard over the last 18 months seems to revolve around the spinoff movie(s) that Johnson’s character will be receiving (along with Jason Statham), the first of which is scheduled for July 26, 2019. In a recent interview, Johnson confirmed that he did not film any scenes for the 8th film with Vin Diesel, and that he may not co-star in Fast & Furious 9 either (4/10/2020). He cited “fundamental difference in philosophies on how we approach moviemaking and collaborating. It took me some time, but I’m grateful for that clarity. Whether we work together again or not.”