When Spike Lee’s debut feature film She’s Gotta Have It premiered in 1986, it did more than just herald the arrival of a film visionary. Tracy Camilla Johns’ portrayal of Nola Darling provided a feminist, black, sexual female protagonist for the ages and of a Brooklyn, New York, like we’d never seen onscreen before.

Lee’s new adaptation of the film as a series for Netflix reimagines Nola Darling (this time played by DeWanda Wise) and the ongoing rotation of her so-called “loving bed” for 2017. Even all these years later, its characters and messaging — particularly arcs that are undercut with sexual assault, gentrification, and Black Lives Matter — feel as vibrant, fresh, and vital as ever. 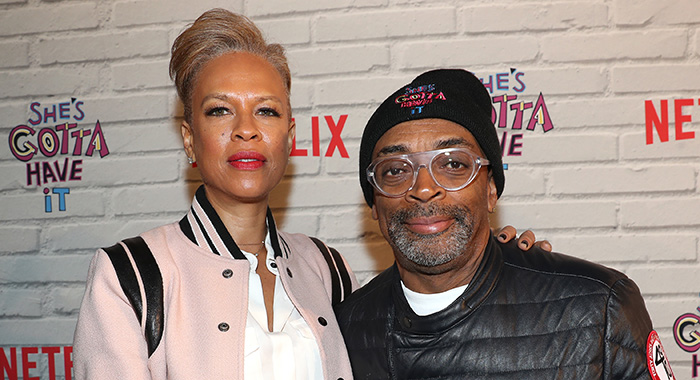 Rotten Tomatoes spoke with Lee, his wife and executive producer Tonya Lewis Lee, Wise, and co-star Lyriq Bent who plays Jamie Overstreet in the series to learn more about the series, due to drop in full on Thanksgiving Day. Find out why this Nola Darling is a feminist icon we need today.

1. Nola Darling gets an update. 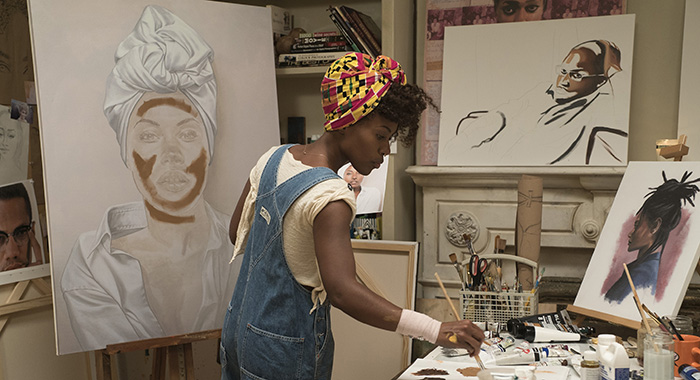 Perhaps it comes as little surprise, seeing as the film is 90 minutes long and the series is 10 half-hour installments, but this new adaptation for the small screen allowed the writers to dive deeper into all its characters, but especially Nola.

“We had this really beautiful opportunity to fill her out and flesh her out,” Wise said.

And one of the driving intentions of this first season was simply a matter of thinking about “a woman like Nola Darling — what’s her life like in 2017?” Lewis Lee said. “Our world has changed very much in the 30 years since Nola first appeared. The idea to be able to explore this black woman’s life in gentrified Fort Greene just seemed right.”

The streaming, episodic format, however, didn’t change Lee’s approach behind the camera.

“I never approached it as TV. It was just making a long movie,” said Lee, who directed all 10 episodes. “The way it was shot, it was a cinematic approach, not television. And if people want to watch it like this [on their phones], they’re missing out, because this is framed for people’s big screen TVs and the theaters.”

2. Nola is a modern spin on the traditional “feminist.” 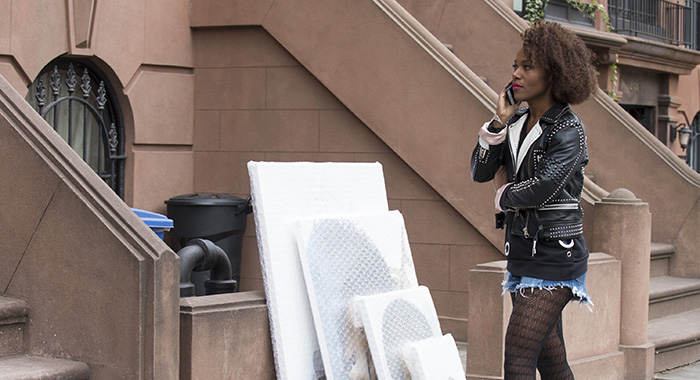 She might not explicitly define herself as a feminist, but the way that Nola carries herself in the world and the ideals she holds close to heart make her one just the same. As Wise said, it’s “in her DNA.”

“What’s fascinating about it in the present context is the personal is political when we talk about reproductive rights, and [when] the choices that we make in our homes have become fodder for the political battlefield,” Wise said. “And so, I just think what you’re seeing in season 1 is a woman — like many women — who is going about her life and being confronted with the challenges, both the larger ones … and those kind of daily insidious things that happen that deter us from being the full human beings that we’re meant to be. So I think she is, in her DNA a feminist.”

“But there’s another element,” Lee added, “because when the film came out, the Nola character was not universally loved. There were many feminists that felt that Nola’s character was backwards, Nola’s character was the same old characterization of oversexed black women, people like bell hooks and Michelle Wallace. On the other hand, you had black women who were happy about their representation on the screen. So especially with my films and dealing with black folks, it’s never gonna be like everybody’s gonna think the same. So it’ll be interesting to see what the old feminists and the new feminists say about Nola Darling’s character.”

3. Nola has varied tastes in men and — new to the series — women! 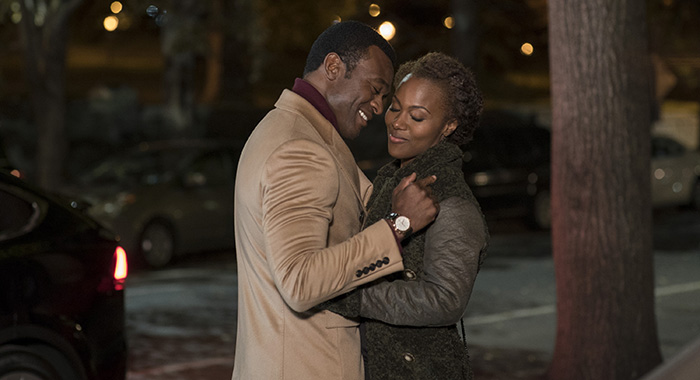 We’d be getting into spoiler territory were we to reveal too much about Nola’s same-sex relationship in this series, but the three men she’s notoriously juggling like in the original movie are the aforementioned Jamie Overstreet, Greer Childs (Cleo Anthony), and Mars Blackmon (Lee in the original film and here played by Hamilton’s Anthony Ramos).

“[Jamie is] the oldest. He’s the most stable in both iterations; he’s the professional business man. In our’s he’s the banker. He just represents stability,” Wise explains. “There’s definitely like a little paternal thing in there, but he’s always represented like this kind of deep love. We’ve complicated it in ours [because] he’s a married man now.”

Turning to Mars, she said that he’s “the most friendship-love of all the three guys… He’s hilarious and he definitely is the guy she goes to parties with. Mars is that dude who you don’t have to dress up [for] or try too hard. He’s the guy you could just like go over to his house and hang out and play video games.”

And lastly, pretty boy Greer: “Greer is, in our iteration, a bit more cultured. In the first version he was definitely like a straight-up meathead. But in our version we were playing around a lot. His archetype is [the] prince, which you’ll see very clearly. And he’s a photographer, so in addition to being the guy she has the wildest sex with and the most like visceral, physical attraction, he also speaks French and introduces Nola to things that she wouldn’t otherwise have come across in her life.”

4. They wanted the series to be about more than just Nola’s three lovers. 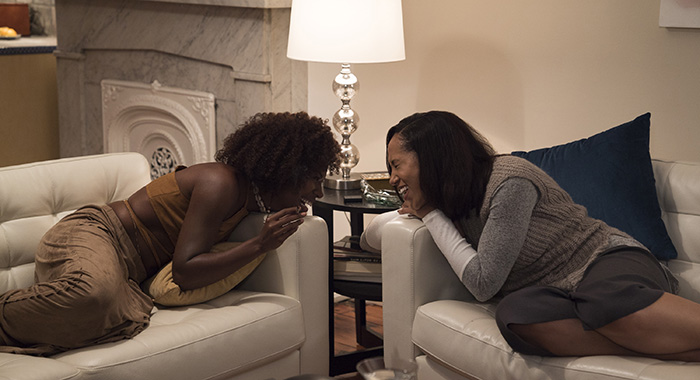 With Nola having three lovers, the film broke the mold in its depictions of confident and fearless sexuality. Back then, Lewis Lee said, a woman with three lovers was “really shocking,” but “today, that’s not such a big deal.” So the creatives embraced the opportunity to let audiences “really experience her fully, to really understand her as an artist, [and] understand her relationships that aren’t just sexual. Understand who she really is as a full-fledged woman.”

“I’ve always grown up with really strong female friendships,” Wise said. “That’s what I’m accustomed to and I just feel like it’s a glaring omission in the cinematic landscape to act like … women are [only] at each other’s throats. We’re here and we’re present. And yeah that was, to be real with you, my favorite amendment or update.” 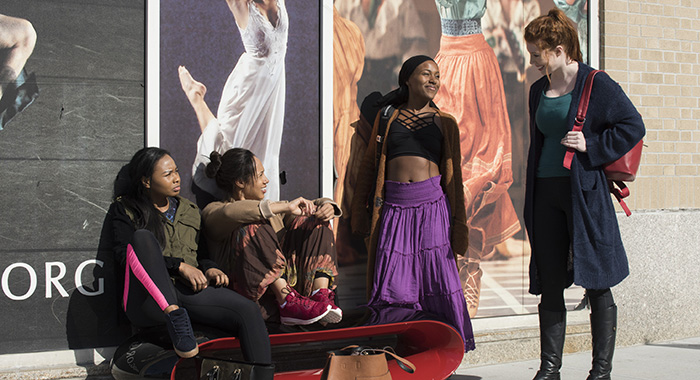 Of course having the insight of Wise and Lewis Lee on set helped mold many of the series’ female-centric narratives, but She’s Gotta Have It also benefited from Pulitzer Prize–winning playwright Lynn Nottage (last year’s Sweat on Broadway) and others, including Radha Blank, Joie Lee (sister and oft-collaborator to Spike), and Eisa Davis. This choir of strong voices from women of color provided “strength and energy as our anchor,” Wise said, adding that the show “is a love letter to women.”

Lee said that “Tonya had her notes in here, even my daughter.” He admits that with the film, “the whole thing is told through a male gaze, because I wrote it, I directed it, and I was in it. But this was totally different. We wanted those type of writers who are black women in the room.”

“There’s just something that feels right about [women writing this series] and just resonates with me in terms of storytelling,” Bent later concurred. “For a very long time now, we’ve seen things one way, which is through the eyes of men. Quite frankly, I’m a little bit bored by our stories and the way we perceive things … It resonates with me the way women tell stories, the way they see things, and the way they attach what they see to certain emotions. It was so important that women were involved in She’s Gotta Have It, because it’s about a woman’s opinion. It’s about her views of herself, and the world around her, and how the world perceives her, and finding that ground for herself — not even a common ground, but that ground for herself in which she can walk on firmly with confidence.”

Lewis Lee said the female writers room changed the narratives that might have resulted from a room full of men.

6. Wise embraced the opportunity for body empowerment onscreen with her male co-stars. 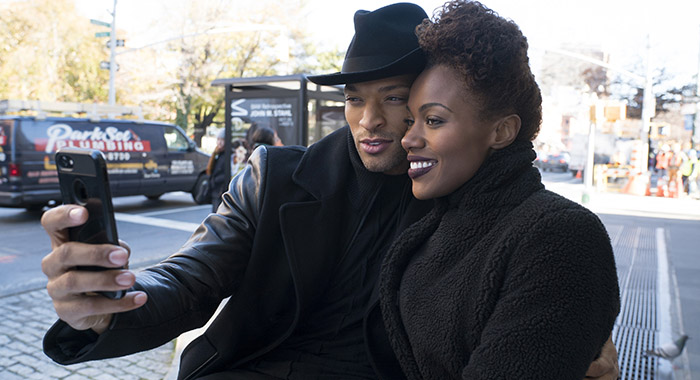 Considering it’s a series that’s in part about a sexually adventurous woman’s trio of lovers, She’s Gotta Have It required Wise to show a lot of skin onscreen. She didn’t flinch at the prospect.

“There’s no preparation,” Wise said when asked about how she readies for a sex scene. “I think part of the reason I’m here is because I’m a bold artist. I believe in storytelling, I believe in filling out the life of these dope characters. So you know, it’s an honor to step into that space and live in the kind of freedom that Nola lives and breathes and walks in.

“And thank goodness, fortunately, I was never raised with body shame,” she related. “My mother was ‘friend mom,’ you know? So I was never raised with the kind of conditioning, the stigma of sex. It was something we talked about. So yeah, my point of view on Nola came from a place of love and understanding. Whether or not I’d ever dated three guys at once or I’m the married woman I am is kind of besides the point.”

7. She’s Gotta Have It comes at a time when women are ‘tired’ of the ways of the world. 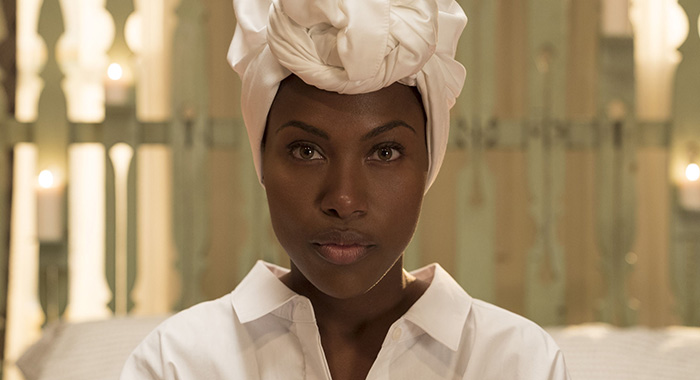 One of the main goals of the show is to “do a decent job of integrating heavy entertainment and craziness and fun and sexiness with issues that I care deeply about, whether it’s like that kind of sexual autonomy or even talking about black-female body issues,” Wise said.

The series’ star hopes that “radical reform where other people don’t feel like they have ownership over women’s bodies” is on the horizon. The goal is that through the hot-button social issues it’s depicting onscreen (Nola, for instance, is assaulted in the series’ opening episodes), She’s Gotta Have It is a step in the right direction to incite real-world conversation.

“Someone interviewed me and they were like, ‘You know it’s fine now, right? Women can do what they want.’ And I just had to counter, like, ‘No! I think the reason why we’re at where we’re at and why women are just being more bold is because we’re tired,’” Wise recalls. “We’re tired. We’re over it. You know what I mean? And that requires a certain heightened posture of resistance. That’s what Nola stands for, and I’m really honored to represent for that.”

She’s Gotta Have It premieres on Thursday, November 23 on Netflix.