Tawny Newsome, Ben Schwartz, Diana Silvers, and Jimmy O. Yang clue us in on season 2 of the Netflix comedy.

The first season of Netflix’s space-themed workplace comedy Space Force set us up to get to know General Mark Naird, Steve Carell’s Chief of Space Operations for the sixth branch of the United States Armed Forces, and his cohorts, who have been tasked by the POTUS to get “boots on the moon” by 2024.

Things went … askew, shall we say. Mark had to uproot his wife, Maggie (Lisa Kudrow), and his teen daughter. Erin (Diana Silvers), from Washington, D. C., to Colorado; Maggie was devastated by the move, and for some reason that remained a mystery throughout season 1, she landed in prison, with a 40-year sentence. Erin missed her friends and bonded with astronaut Angela (Tawny Newsome) more than her school peers; Mark butted heads with “F. Tony” (Ben Schwartz), Space Force’s slick social media director; Mark also suspected his ally and lead scientist, Dr. Adrian Mallory (John Malkovich), of being a spy and outed him in the process; and Dr. Chan Kaifang (Jimmy O. Yang), Adrian’s assistant, tried to forge a social life while also proving himself to Adrian at work.

It all pays off in the shortened – seven episodes – sophomore season, as the characters evolve in lovely ways, and new connections lead to the emergence of a work family ready to take on anything the government, the political agendas of military rivals, and romantic entanglements may throw their ways.

Rotten Tomatoes talked to Schwartz, Silvers, Newsome, and Yang about the new season and came up with a few reasons you might want to consider a Space Force binge in your weekend plans. 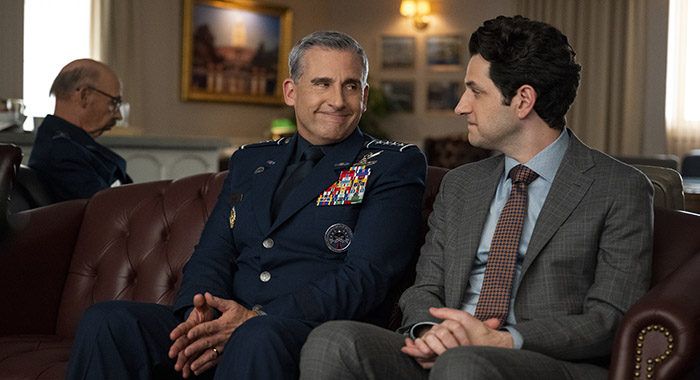 Tony, we learn, has been somewhat misunderstood, and his relationship with boss Mark takes a turn that, along with his own maturation, makes Tony one of the most endearing members of Space Force.

“It was something that we were trying to play with a little bit in season 1, and I got to talk to all the writers and (series co-creator) Greg (Daniels) kind of met with all of us separately … and we talked about things that we thought, and I was like, ‘We really think that Mallory’s the person that Tony can talk to, but Mark Naird is the person he always wants to impress,’” Schwartz says.

And, as the audience learns, there’s a really good reason why Tony looks to Mark for a mentor/father figure bond.

“It was great to play,” he continues. “It’s always so fun to play a comedic character that also has a grounded nature to it. And you can also see where the comedy comes from and where the pain comes from. So all that stuff was super fun.” 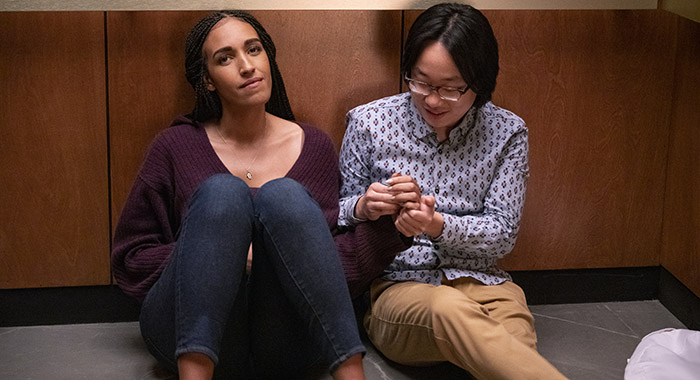 Romance takes center stage in season 2, for Mark and Maggie, and also for Chan and Angela, though it’s not smooth sailing for either couple.

“I like how they developed this year, and there’s a lot of interpersonal growth between the two,” Yang says of the new workplace couple. “So in a way, maybe they’re OK without each other, but also they still like each other very much, without giving too much away. So it really could go any way possible, but I think I want to see a happy ending.”

Newsome jokes about what she sees for Chan and Angela’s future: “I’m going to be bold, and I’m going to say marriage, and five kids.”

Erin spends a lot more time with her dad’s coworkers this season, and that has a big impact on her decisions about her future. Silvers has some fantastic bonding moments with Malkovich’s Adrian, and – spoiler alert – guest star Patton Oswalt who plays … well, you’ll see. But it’s a brilliant scene that helps Erin choose a surprising path that actually makes a lot of sense in the end.

“The episode was just so well-written,” Silvers says. “That was one of those episodes, I think, that it was so pivotal, and the intention was all there, so it was very easy to be connected to Erin and come to that conclusion and that decision.”

Yang pulled double duty in his role as Chan and as one of the Space Force writers this season. 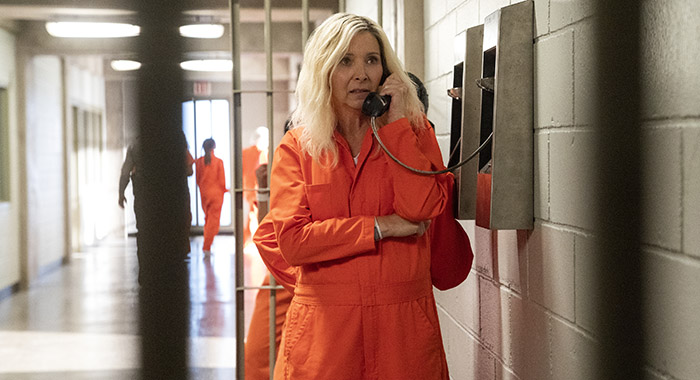 And finally, that question that was left hanging at the end of season 1 may or may not be answered this season. So we asked the cast what their theories are about why Maggie is going to be in prison for the next four decades.

Says Newsome: “It has to be some kind of a federal crime, because her prison, the security seems real lax, so it doesn’t seem like a place that houses violent offenders. And I don’t think Maggie would’ve done anything violent. So I don’t know. I think she sold some secrets or something, but I don’t know how that doesn’t get Mark Naird canned. My best guess is treason.”