The series’ star teases the challenges and epic train battles to come, as Layton leads a new crew toward freedom, Wilford races to get his train back, and Snowpiercer heads into uncharted territory in the new season coming to TNT.

Snowpiercer, the sci-fi series with a high-speed 1001-carriage train at its center, has always had forward momentum and an extreme sense of urgency. Still, expect season 3 to speed things up.

In the series, Earth’s only known survivors of a planet-killing disaster are on a never-ending ride with dwindling hope that a return to normal life outside of the train is possible. The situation naturally devolves into Lord of the Flies–like scenario.

The retelling of Bong Joon-ho’s Certified Fresh 2013 movie of the same name, which found Chris Evans taking a Marvel-superhero break, is a tale of revolution and class warfare. In its first two seasons, the TNT series built upon that concept while fleshing out multiple storylines involving a diverse cast of characters — led by Daveed Diggs’ revolutionary leader Andre Layton and Jennifer Connelly’s Melanie Cavill — and inspiring hope that there’s a warm spot out there where the crew and passengers can build a new civilization.

The villainous Mister Wilford (Sean Bean) appeared in season 2 to kick those aspirations down a few pegs. While the Tailies fought for their equality, Wilford struck back with force and influence, showing his megalomaniacal drive to remain the captain of this ship, no matter who got hurt in the process.

But a rebellion did happen, leading one train to become two. Now Layton is leading this pirate train away from Wilford and toward an inhabitable destination that has yet to be discovered. Are they on the verge of finding a warm spot or just driving, forever, through the endless frozen oblivion?

Heading into season 3, the emotional stakes appear higher, the story pacing more urgent, and, as Diggs revealed to Rotten Tomatoes, there will be “a fair amount of pirate action” this time around. 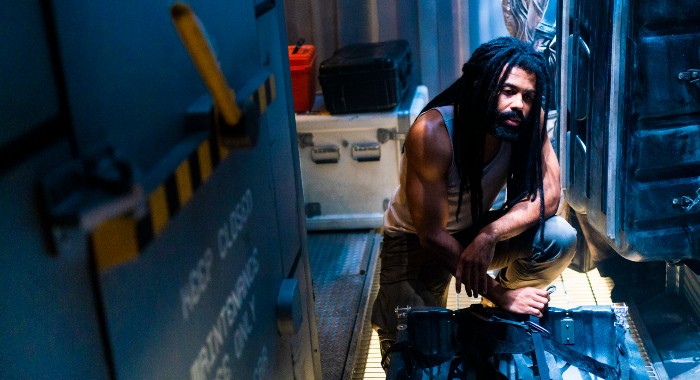 Aaron Pruner for Rotten Tomatoes: So much has changed since last we checked in with Layton. He’s captain of the ship now. How are things going for him heading into season 3?

Daveed Diggs: Well, it’s not easy for him but, in some ways, when we meet him, at least he’s a lot more settled than in season 2. The trains split and Layton’s really with his closest friends on this pirate train, trying to maybe find Melanie (Jennifer Connelly), maybe complete Melanie’s mission of finding warm spots. I think that they’ve been gone for about six months now separated from the train and they’ve become a really good crew.

Nothing like some on-the-job training to get you there.

Diggs: And Layton has become a lot more grounded in his role as a captain. And so he’s a little more comfortable being a leader. But there’s a lot of stuff going on. Zarah (Sheila Vand) is pregnant, and he hasn’t seen her for six months. She’s on another train where he doesn’t really know what’s going on there. But Wilford controls things, so it’s probably not good. Josie (Katie McGuinness) is on this train, who Layton is clearly in love with. But they have a very long history together and they’re trying to be professional.

Diggs: It’s definitely a lot. In Snowpiercer fashion. It’s always a lot. But I think they are trying to, yet again, figure out if there’s any new way to live on the planet, because the way they’re living isn’t working – which sounds familiar.

Layton’s been in this dire situation on the train for so long. Now that he’s found this sense of power, what does pursuing a life outside of the train mean to him, deep down? As bad as things are on Snowpiercer, does he really want to give this all up?

Diggs: I think it’s terrifying. The particularly terrifying bit of it for Layton is he doesn’t know if that actually exists. They have yet to prove that. So he is really riding on faith right now, which is a tricky thing when you’re leading people, just asking them to jump on your faith train. And so there’s a lot going on there. It’s hard to be able to imagine a circumstance outside of the one that you’ve lived in. And so he doesn’t know what’s going to happen. I think it’s the prospect of having a child that, for me, has really been driving Layton forward.

You used the term “pirate train” earlier. Is it safe to call Layton and his crew pirates now? Since there are two trains, will there be some pirate ship–style train battles coming?

Diggs: There’s a fair amount of pirate action going on. The first few episodes have a very kind of Pirates of the Caribbean and Master and Commander kind of feel to them. The train battles are a new thing. We always were inter-linked, but two trains is a new experience for all of us in terms of how you shoot something like that. It reminded me of watching Star Trek and seeing the spaceships fight each other. There’s a lot of movie magic going on. And they pulled it off, I think, in a really impressive way, given how silly some of it felt.

This may be a common question, but given how freezing everything always looks, what is the average temperature on set?

Diggs: We were shooting actually in the biggest heatwave in the history of Vancouver last season. None of the houses have air conditioning. Everyone was trying all the hotels in the city, and they filled up because people couldn’t live in their houses, which was wild because a lot of them are older houses and when have you ever really needed AC and Vancouver? So it was hot out there, and we do exterior scenes this season in those breach suits and those are just sweat boxes. It was — an interesting experience.