This week’s Ketchup brings you more headlines from the world of film development news, covering such titles as Knives Out 2, Star Wars: Rogue Squadron, and Transformers: Rise of the Beasts. 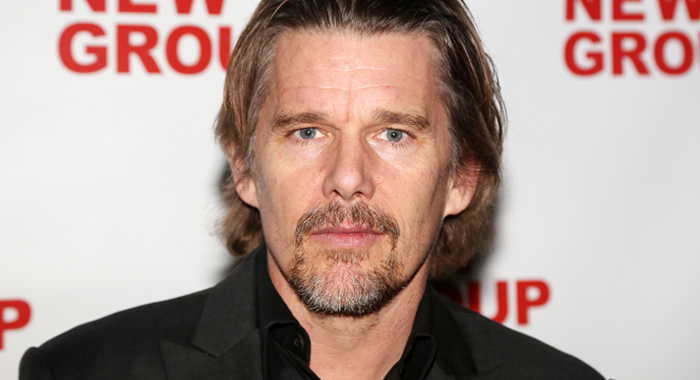 Murder mystery movies typically require ensemble casts because the audience needs to have multiple suspects to consider while trying to guess the identity of the killer, and writer/director Rian Johnson followed that template with 2019’s Knives Out (Certified Fresh at 97%). Following the lucrative $400 million deal to produce two sequels for Netflix, the casting of Knives Out 2 has been similarly ambitious, including MCU alumni Dave Bautista, Kathryn Hahn, Jessica Henwick, and Edward Norton, as well as Kate Hudson, Janelle Monae, and Leslie Odom, Jr. Filming of the sequel has begun on location in Greece, and several photos of the cast quickly appeared online. As more photos emerged, fans were pleasantly surprised to discover the presence of Ethan Hawke (Boyhood, Before Sunrise, Reality Bites), who hadn’t previously been announced but who appears to be pointing a gun at Hudson and a spectacularly (half) dressed Bautista. In related news, Quentin Tarantino answered a question about whether he will direct a Kill Bill Vol 3 by saying that if he did, he would cast Stranger Things co-star Maya Hawke (Ethan Hawke’s daughter) to take over the role from her mom, Uma Thurman. Having reported that, we should also note that Quentin Tarantino has a long history of “dream casting” his own movie ideas which never ended up being produced.

It was during Disney’s ambitious Investor Day event in December that we first heard about Patty Jenkins (Wonder Woman, Certified Fresh at 93%) directing a Star Wars: Rogue Squadron movie for release on December 22, 2023. Around that time, Jenkins was asked about the film’s screenwriter, but she refrained from identifying the writer, saying he should have “his own proper announcement.” What we didn’t know at the time was that it would be another six months before that announcement was made, but we can now report that screenwriter Matthew Robinson is currently “furiously keyboarding away on a draft” of Star Wars: Rogue Squadron. Robinson made his feature film debut in 2009 with Ricky Gervais’ The Invention of Lying (Rotten at 56%), co-wrote Dora and the Lost City of Gold (Certified Fresh at 85%), and has also adapted the Little Shop of Horrors musical and the sequel Live Die Repeat and Repeat (neither of which has been produced yet). Patty Jenkins reportedly wants to direct the “greatest fighter pilot movie ever made,” inspired by her father’s own experiences as a fighter pilot.

2. RON PERLMAN TO VOICE OPTIMUS PRIMAL IN TRANSFORMERS: RISE OF THE BEASTS

One of the most infamously “bad movies” ever made was 1953’s Robot Monster (Rotten at 36%), about an alien robot that looked like a huge gorilla suit with a diving helmet for a head; we’ve had precious few movies about robotic gorillas in the years since. The Transformers franchise has heard that challenge, and filming will soon begin on Transformers: Rise of the Beasts, which will introduce characters from the Beast Wars spinoff. The new characters will include the Maximals and their leader, Optimus Primal, who is a Transformer who turns into a gorilla. Paramount Pictures only officially announced Transformers: Rise of the Beasts (6/24/2022) a week ago, and we now know that Optimus Primal will be voiced by Ron Perlman, the prolific star of such monster movies (or monster-adjacent movies) as the 2004 Hellboy (Certified Fresh at 81%) and its sequel, Pacific Rim (Fresh at 72%), and most recently, the video game adaptation Monster Hunter (Rotten at 45%). Perlman is the fourth cast member announced for Rise of the Beasts following Peter Cullen (reprising his voice role as Optimus Prime), Anthony Ramos (In the Heights), and Dominique Fishback (Judas and the Black Messiah), with Steven Caple Jr. (Creed II, Certified Fresh at 83%) directing the film, which is basically a 1990s-set sequel to 2018’s Bumblebee (Certified Fresh at 90%).

3. TILDA SWINTON TO REUNITE FOR WES ANDERSON’S NEXT SECRET PROJECT

In an era during which it seems we sometimes know too much about a movie before it even starts filming, it’s perhaps refreshing that there are still directors like Wes Anderson (Moonrise Kingdom, The Grand Budapest Hotel) who are still somehow capable of filming their movies without most of us knowing what they’re about. That state of mystery most recently applied to Anderson’s upcoming The French Dispatch, which is now scheduled for October 22, 2021 after being delayed for over a year by the COVID-19 pandemic. That delay also means that Anderson will start filming his next film in Spain in September, a full month before The French Dispatch is released. The only details known thus far about the not-yet-titled project is that it will reunite Anderson with Tilda Swinton, who has worked with Anderson multiple times, and that it’s believed to be set in a desert (but that it’s probably not a “Western”). We can probably expect Swinton to be just the first of several actors cast in the film — and likely the first of many returning collaborators — as Wes Anderson usually uses large ensembles.

In March, during the same week we learned Steven Spielberg was directing a movie based on his own youth, the news also broke that Elizabeth Banks’s next film will be Cocaine Bear, based on the surprisingly true story of a Georgia brown bear that died in 1985 after consuming 40 packets of cocaine. Although we don’t know for sure how this story will be adapted, it’s probably likely that it will focus more on the humans behind the cocaine smuggling than on the bear itself (our apologies to anyone hoping for the Scarface of talking bear movies). As such, Banks and Universal Pictures have lined up an ensemble cast that includes Alden Ehrenreich (Solo: A Star Wars Story), O’Shea Jackson (Straight Outta Compton), Keri Russell (TV’s Felicity), Jesse Tyler Ferguson (TV’s Modern Family), and perhaps for some gangster movie bonafides, Ray Liotta (Goodfellas).

When 16-year-old Isabela Merced (who’s now 19) was first announced as the star of Dora and the Lost City of Gold (Certified Fresh at 85%), the decision no doubt caught many people off guard since they were more familiar with Dora as a child of about half that age, but the Tomatometer score suggests the casting worked. Merced was cast this week as one of William Shakespeare’s most famous characters (sort of) as a modern twist on Juliet Capulet from Romeo & Juliet. She will play Juliet in Rosaline, a spinoff that focuses the story on Juliet’s cousin Rosaline (Kaitlyn Dever from Booksmart, Certified Fresh at 96%), “a sharp but idealistic young woman—who happens to be Romeo’s recent ex.” Karen Maine (Yes. God, Yes, Certified Fresh at 93%) will direct Rosaline for 20th Century Studios from a screenplay by the writers of (500) Days of Summer (Certified Fresh at 85%).

Movies are sometimes criticized for being “rushed to production,” but there are plenty of films that take over a decade to get made (and some projects never make it out of development). One such project that has been in the works since at least 2009 is the horror film Last Voyage of the Demeter, which essentially aims to be a spinoff of Bram Stoker’s original Dracula novel, in which the Demeter was the ship that transported Dracula’s coffin from Transylvania to England. Last Voyage of the Demeter has finally started production under the direction of Norwegian filmmaker André Øvredal (Trollhunter, Certified Fresh at 82%; The Autopsy of Jane Doe, Certified Fresh at 87%; Scary Stories to Tell in the Dark, Certified Fresh at 78%). Øvredal’s cast will include Liam Cunningham (Davos Seaworth from Game of Thrones), David Dastmalchian (soon to be Polka-Dot-Man in The Suicide Squad), and horror stuntman Javier Botet (Slender Man, The Conjuring 2) as Dracula himself. Hopefully, Last Voyage of the Demeter will explain how the ship ever left Transylvania… which is landlocked.

Following two separate musical careers as the lead singer of both Stone Temple Pilots and the supergroup Velvet Revolver, professional rock star Scott Weiland died on a tour bus in Minnesota in 2015 at the age of 48. Weiland’s death came just a few years after the publication of his memoir Not Dead & Not for Sale: A Memoir, and now the movie rights to that book have been acquired by the producer of the Joy Division biopic Control (Certified Fresh at 88%). That won’t be the title of the planned biopic, however, as the producers have instead announced it to be Paper Heart, which comes from the Stone Temple Pilots song “Trippin’ on a Hole in a Paper Heart.” Producer Jennifer Erwin is now adapting “Weiland’s life [by  melding] rock stardom with a moving love story, the rock band frontman plunged into addiction and then fighting his way back to the top with comebacks.”