Marvel's Agents of S.H.I.E.L.D. Cast Is About to Film the Series Finale

That It: Chapter Two trailer. Plus, updates on His Dark Materials, Evil, Stumptown, and Nancy Drew.

Downtown San Diego is swarming with costumed superheroes and more of your favorite comic, film, TV, and video game characters — which means it’s time for San Diego Comic-Con again. This is the convention’s 50th year, and the first day brought panels for fan-favorite novels-turned-HBO series His Dark Materials, Marvel’s Agents of S.H.I.E.L.D., The CW’s new dark mystery Nancy Drew, and more. Read on for the biggest news from Thursday’s TV panels.

Marvel’s Agents of S.H.I.E.L.D. Briefs Fans On Their Final Mission 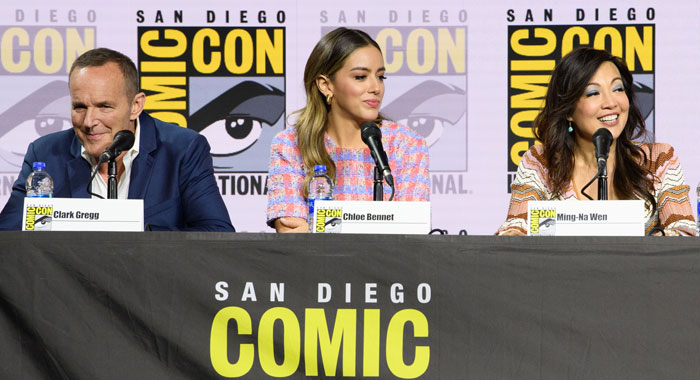 Marvel’s Agents of S.H.I.E.L.D.’s first Hall H appearance at Comic-Con was bitersweet following the Thursday announcement that the series’ upcoming seventh season will be its last. In fact, as executive producer Jed Whedon revealed, the cast assembled earlier in the week to read the series finale script together.

Gregg called the whole series a “magical journey” — particularly since it seemed his character, Agent Phil Coulson, died in Marvel’s Avengers. But as he recalled, Avengers director Joss Whedon pulled him aside one day and said, “you might not be dead.”

Coming back to the final year, which is set to air in 2020, Loeb said, “It’s going to be an ending you deserve because S.H.I.E.L.D. fans rock.” He thanked those in attendance for helping the show, which was often on the edge of cancellation, to reach a total of 136 episodes. “It’s the flagship show of Marvel Television, and it’s the show I love most,” he added.

Hamilton creator Lin-Manuel Miranda is quite fond of author Philip Pullman’s His Dark Materials trilogy. As he told the audience at the show’s Hall H Comic-Con panel on Thursday, he and his now-wife first bonded over a shared reading of the books. So when he was offered the part of Texan airship pilot Lee Scoresby — a dashing man with more than few traits of the traditional fantasy rogue — Miranda thought, “If they can see it, I’ll find it.”

In the world of His Dark Materials, souls are anthropomorphized as animal companions (known as “daemons”) for each of the major characters. Scoresby’s is a bunny.

“Sorry, an arctic hare,” Miranda said, correcting one fan’s question about Scorsby’s daemon. “[He’s] about a knee high. This ain’t no Thumper,” he explained, adding that arctic hares “survive in anything — they’re survivors and so is Lee Scoresby.”

The series, which also stars Dafne Keen, Ruth Wilson, and James McAvoy, takes viewers from the heart of this unusual world to many others (some of which can be glimpsed in the first full trailer for the series, which debuted during the panel). But for the lonely Scoresby, it means a chance to find new companions besides his demon.

The latest drama from The Good Wife and The Good Fight creators Robert and Michelle King is, like their other series, a procedural with deeper roots. Except instead of sociopolitical commentary, Evil, which premieres this fall on CBS, tackles the existential question of the origin of evil and its place on the dividing line between science and religion. A skeptical female psychologist teams up with a priest-in-training and a carpenter to investigate the backlog of unexplained mysteries and supposed miracles, demonic possessions, and hauntings in the Catholic church, and find out if there’s a logical explanation for each of if supernatural forces are at work.

“What’s fun is we’re looking at a lot of the same ideas we were exploring in our legal shows,” Michelle King told the crowd at the series’ San Diego Comic-Con panel following a screening of the premiere episode. “There’s crime, there’s evil, but we’re addressing it in a different way.”

Added star Mike Colter, a.k.a. Marvel’s Luke Cage, who plays the aforementioned priest, “All of us are trying to find a truth, and I think that’s what my character wants more than anything. …It’s that sort of thing that drives his character.”

Cobie Smulders Says Her Stumptown Character Is No Superhero

This fall, ABC will debut the graphic novel-based series Stumptown starring Avengers-adjacent Cobie Smulders as a private investigator with a gambling problem. In the series’ first SDCC panel, she told the crowd that her character doesn’t have much in common with the superheroes her Marvel character, S.H.I.E.L.D. Agent Maria Hill, deals with. The series takes a much more grounded approach to crime-fighting.

“She’s not a superhero. She’s not really highly skilled. She’s a scrapper and the fight scenes will be very dirty and very realistic,” she teased.

The CW’s new dark murder-mystery drama adapted from a beloved children’s literary series is Nancy Drew, which sees the titular teen detective embroiled in a murder mystery. Yes, it’s a dark and gritty take on the character much like Riverdale‘s versions of Archie Comics characters.

“We were huge fans of the 1970s show, and when we were putting this together, we started from [what] we all loved about Nancy Drew,” creator Stephanie Savage said. “She was brave, and smart, and fearless, but she wasn’t just the good girl. She had a little darkness about her.” 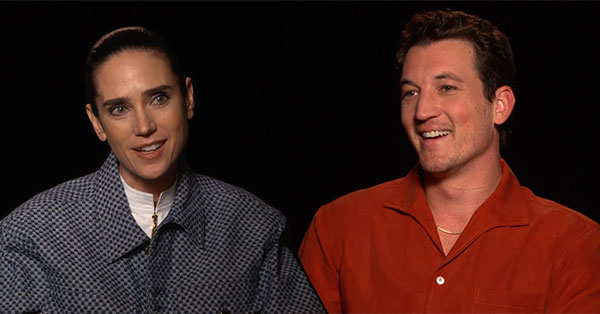