"Rotten Tomatoes Is Wrong" About... Spider-Man 3 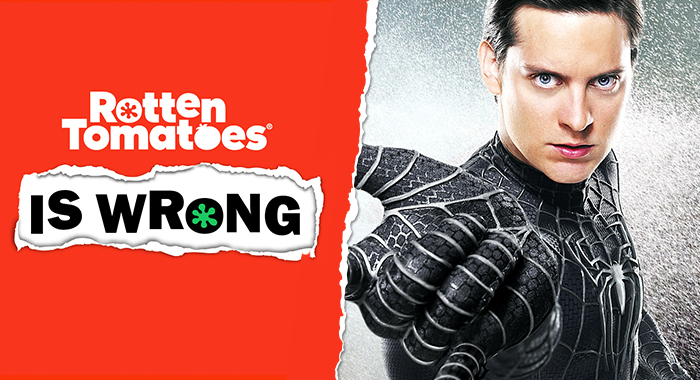 In 2007, Sam Raimi’s Certified Fresh run of Spidey movies came to an end with Spider-Man 3, the barely-Fresh and definitely bloated threequel that saw Tobey Maguire’s Peter Parker doing battle with not one, not two, but three villains – while the audience had to battle with a cinematic villain of their own, the jazz-loving Emo Peter.

Today, the movie is largely seen as a big misstep for all involved, the film that ended the Maguire Spider-Man era and precipitated the 2010s reboot franchise with Andrew Garfield. (See the 51% Audience Score, the lowest of any live-action Spider-Man movie.) But at the time of its release, critics were happy-ish with what they saw, with enough reviews tilting Fresh for the movie to be sitting at 63% on the Tomatometer.

Who’s right? Who’s wrong? And – we can’t stress this enough – what the hell was with that dance sequence?

Spider-Man 3 is the subject of the first episode of our brand-new podcast series, Rotten Tomatoes Is Wrong (A Podcast from Rotten Tomatoes). Each week, hosts Jacqueline Coley and Mark Ellis and guests go deep and settle the score on some of the most beloved – and despised – movies and TV shows ever made, directly taking on the statement we hear from so many fans: “Rotten Tomatoes is wrong.”

This week, swinging with them through the 2-hour-and-19–minute clash of awesome FX and bizarre soap that is Spider-Man 3, is pop-culture commentator and unabashed Spidey 3 fan girl Roxy Striar, who believes that, despite its flaws, the much-maligned film is Fresh AF; our hosts don’t quite see it that way. In this episode, the trio digs into how the glow of Spider-Man 2 might have boosted that score for Spider-Man 3, what went on off-screen that led to an all-in villain fest on-screen, and whether the movie holds up 13 years later in the wake of The Dark Knight trilogy and the MCU.

Is Rotten Tomatoes “wrong”? Tune in to find out and join the discussion.