Robert Pattinson and Nicholas Hoult Vying to Be Youngest Batman Yet

Catch up on the caped crusader casting drama plus the rest of the week's big news, including James Wan's Mortal Kombat and Chris Rock's Saw spin-off.

This Week’s Ketchup brings you another 10 headlines from the world of film development news (those stories about what movies Hollywood is working on for you next), covering such titles as The Batman and… wait, you only want to know about The Batman, right? OK, here we go…

Robert Pattinson In Talks for The Batman, Along with Nicholas Hoult 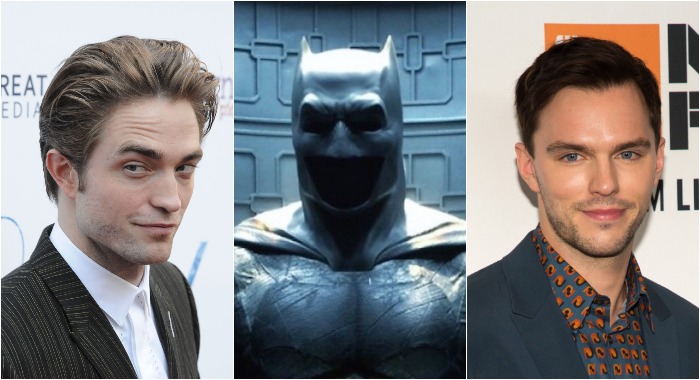 British actor Robert Pattinson made his film debut as Cedric Diggory in 2005’s Harry Potter and the Goblet of Fire but he’s probably still most recognized for playing the vampire Edward Cullen in the five Twlight Saga films. Now in his 30s, Pattinson has lately been focusing on independent and non-Hollywood films like Good Time, High Life, The Rover, and The Lost City of Z. Thursday night, the news broke that Pattinson is now in talks to continue his relationship with Warner Bros. (which produced the Harry Potter films) in one of their highest-profile upcoming projects, the DC Comics adaptation The Batman. That report came from Variety, but some competitors are cautioning that the deal with Pattinson is not final, with Nicholas Hoult (Tolkien, About a Boy) also in the running, if Pattinson does not sign on. The Batman will be the first solo movie for the DC Comics superhero since The Dark Knight Rises, and will be directed by Matt Reeves (Cloverfield, Let Me In), whose most recent film was 2017’s War for the Planet of the Apes. Pattinson’s next film for Warner Bros. will be an untitled Christopher Nolan’s project (July 7, 2020), with The Batman scheduled nearly a year later on June 25, 2021.

1. The Next Star Wars Trilogy, Kicking off in 2022, Comes Via the Game of Thrones Showrunners

Much has been made this week about the declining Tomatometer scores for the last two episodes of Game of Thrones, but seen from the big picture, the show still retains an impressive 91% Tomatometer score. Having said that, Lucasfilm and Walt Disney Pictures may have been better off announcing this week’s news earlier in the month. Last week, Disney confirmed that the Star Wars franchise will take a three-year hiatus after Star Wars: The Rise of Skywalker (December 20, 2019) with new films every two years thereafter (December 12, 2022; December 20, 2024; December 18, 2026). This week we learned that the first of these new Star Wars films in 2022 will be produced by Game of Thrones showrunners David Benioff and D.B. Weiss. That revelation came with almost no other details, but there are lingering rumors that their Star Wars project will be set in the same era as the Star Wars: The Old Republic video games. Star Wars: The Last Jedi director Rian Johnson is also reportedly working on a new Star Wars trilogy.

2. The Real Mandarin will appear in the MCU

As it turned out, Thanos was the “big bad” of the first 20 or so films of the Marvel Cinematic Universe. If we look back to the original Iron Man, however, the villain that was being teased was the Mandarin, one of Iron Man’s oldest arch-nemeses. The road to the Mandarin continued in 2013 with Iron Man 3, and the “All Hail the King” Marvel One-Shot short film, but we have not yet seen the Mandarin in his classic form. This week, in a Reddit AMA, Marvel Studios President Kevin Feige directly addressed The Mandarin, answering “Yes” to a question about future plans for the character. As to when we might see the Mandarin, one strong and obvious possibility is the Shang-Chi movie, which is currently in active development.

Something that we point out all the time here is that there have been so many Marvel movies by this point that many new films have at least a couple of Marvel stars (especially if we can include the Fox movies). Jessica Chastain (who’s joining the club with next month’s Dark Phoenix) is producing and starring in a new international spy movie called 355, which will start filming on July 8 in Paris before moving to London and Morocco. 355 will feature several female costars, including Lupita Nyong’o (Black Panther), Penelope Cruz, and Fan Bingbing (Blink from X-Men: Days of Future Past). We can now also add to the cast Sebastian Stan, a.k.a. the Winter Soldier, and Edgar Ramirez (who costarred with Penelope Cruz in TV’s The Assassination of Gianni Versace: American Crime Story). (Marion Cotillard had previously been attached to costar but has recently dropped out.) The title 355 is a reference to “Agent 355,” a female spy during the American Revolution.

Bohemian Rhapsody star Rami Malek recently signed on to star in the next James Bond film as the its villain, and this week, he signed on for another new project. Malek is in talks with Warner Bros. to join Denzel Washington in the police crime thriller The Little Things. Washington will play “a burned-out cop up in Kern County who teams with Baxter (Malek), a crack detective from the LA Sheriff’s Department, to catch a serial killer.” The Little Things refers to Washington’s character’s ability to see the “little things that can help solve a case.”

Walt Disney Pictures is proceeding, a few movies a year, in their far-reaching plans to adapt their classic animated movies into live-action films (including next week’s Aladdin). Just last week, Disney announced a release date of December 23, 2020 for Cruella, their live-action reimagining of the villain character from 101 Dalmatians. Emma Stone has been attached for a while to play Cruella in the film, which will be set in the world of high fashion of the 1970s. Another Emma, Emma Thompson, signed on this week to play the film’s antagonist, which also gives us a better idea about the premise (basically, it’s a prequel to 101 Dalmatians). Stone’s version of Cruella will be “a brilliant clothing designer who nonetheless toils as a lowly department store worker. One day, a posh woman known as the Baroness (Thompson) enters the store, wearing Cruella’s special locket that was given to her by her mother,” leading Cruella to plot against her. Cruella is scheduled to come out five days after Coming to America 2 and Steven Spielberg’s West Side Story, and the same day as The Croods 2.

Every few years or so, we get another movie that brings together a few older movie stars. Tommy Lee Jones starred in Space Cowboys (with Clint Eastwood, James Garner, and Donald Sutherland), and then in 2013, Robert De Niro and Morgan Freeman costarred in Last Vegas (for just two examples). The latest such movie is called The Comeback Trail, and the stars this time around will be De Niro and Freeman again, plus Jones. De Niro will play a man in debt to a mob boss (Freeman) who “creates an insurance fraud by casting washed-up, suicidal cowboy/movie star Duke Montana (Jones) in a poorly written Western with the intention of killing him during the first days of filming.” Zach Braff (of TV’s Scrubs) will also costar in The Comeback Trail as De Niro’s business partner.

Way before James Wan directed movies like The Conjuring and Aquaman, he was actually the director of the very first Saw movie in 2004 (and he produced several of the sequels). The torture-trap horror franchise is on its way back to theaters for next year (October 23, 2020), but it’s coming to us via a celebrity producer in the form of Saturday Night Live alum Chris Rock. Rock is reportedly a longtime fan of the Saw movies and came to the untitled Saw spin-off with his own pitch for how to start a new story that is not a reboot, but one that will “work within the existing Saw mythology.” The new Saw movie will be directed by Darren Lynn Bousman, the director of Saw II (37%), Saw III (28%), Saw IV (18%), and 11-11-11 (7%) – but could the involvement of Chris Rock and James Wan turn things around?

Last week’s Pokémon Detective Pikachu may have broken box office records, and also have the first ever “Fresh” Tomatometer score for a video-game adaptation, but one movie doesn’t make for an instant rebound for the entire concept. Regardless, Hollywood is still chugging along with its collective plans for video-game movies, and this week, we learned that Mortal Kombat is one of the already attempted (a few times) video game franchises that’s coming back. Producer James Wan is on board this attempt at rebooting Mortal Kombat, which is scheduled to start filming in Australia later this year. It’s not yet clear which Mortal Kombat games or characters will be adapted for this new movie.  The first Mortal Kombat was “Rotten” with 46%, and its sequel Annihilation was much lower with just 2%. With Wan on board, the reboot could nudge Fresh territory, but we’re waiting to see.

1. Can Paramount Take On Marvel With Obscure Atlas Comics Movies?

The biggest challenge for any movie studio that’s not Disney or Warner Bros. in challenging their superhero movies is that there is only one Marvel Comics, and only one DC Comics. Sure, there are other comic book companies, but none of them are the “big two.” One company that briefly tried to get into their space in the 1970s was Atlas Comics, formed by Martin Goodman, the original founder of the 1930s company that later became Marvel Comics. Atlas Comics launched with dozens of titles and some notable writers and artists, but they mostly were all cancelled within three or four issues. Paramount Pictures has regardless started an agreement to adapt Atlas Comics titles into superhero movies. The possible movies include such titles as The Cougar, Ironjaw, Tigar-Man, Grim Ghost, and The Hands of the Dragon. We’re calling this play by Paramount one of the week’s Rotten Ideas just because taking on Marvel and DC seems crazy: Atlas Comics was never going to, and still isn’t, ever going to compete with titles like The Avengers, Justice League, or X-Men. But then again, remember when folks thought Iron Man was too obscure to launch a franchise…