If You Suck, You’re Doing It Right: Pete Holmes on Life as a Comedian and Crashing 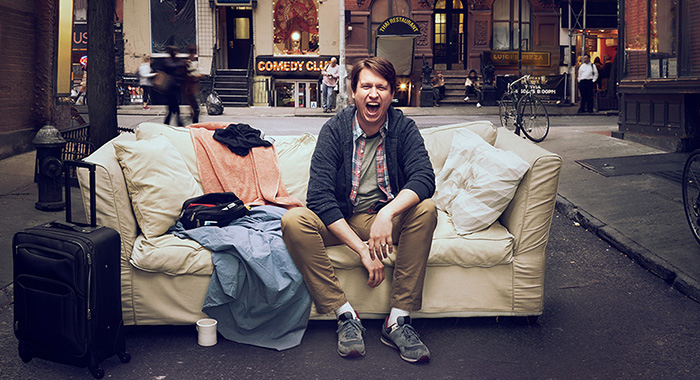 New half-hour HBO comedy Crashing stars Pete Holmes in a largely autobiographical look at his early days in comedy, when he was a struggling comedian whose wife had just left him.

Crashing is a collaboration between creator Holmes and Judd Apatow, who executive produces the series and directed the pilot. Holmes told Rotten Tomatoes that he credits Apatow with distilling Holmes’ real life into an interesting and humorous TV format.

“I like to think the emotion of the story is 100-percent true, but the events have been changed — not like a crime show, ‘to protect the innocent,’ but it’s to make it funnier and more eventful and more interesting,” Holmes said. “What I think Judd is very, very good at as a director and producer is taking the emotional truth of a story like mine, but making it very, very funny and interesting. If we did it exactly like it happened, it would have been a lot slower and drawn out and more montages of me eating ice cream.” 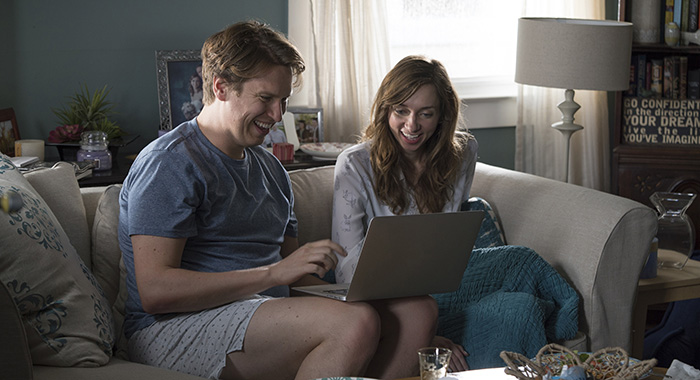 But make no mistake — even after condensing the material and punching things up, Crashing is still a story of Holmes’ struggles. The title has a double meaning; not only is it about Holmes bombing on stage, but it’s also about him crashing on other comics’ couches after catching his wife in bed with another man. 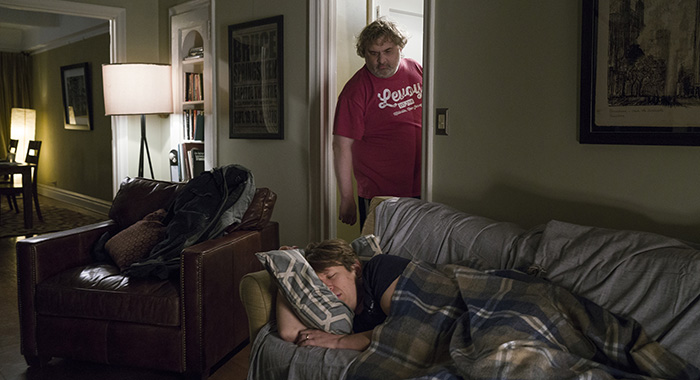 “The thing that I love about the engine of the show is we get to introduce all these guest stars,” Holmes said. “I see the true application of that premise lasting probably two seasons and then maybe resetting if Pete were to get to the next stage and maybe go to L.A., because that is what happens. When comedians move from New York to L.A., they kind of start over and start crashing on new couches.

“And even if Pete finds an apartment at some point when he gets his act together, I think there will be ways to find those bottle episodes where we can have like Sarah Silverman for one episode. When you’re a comedian, you’re like a troubadour, and you have maybe 15 friends where you see most of them only once or twice a year.” 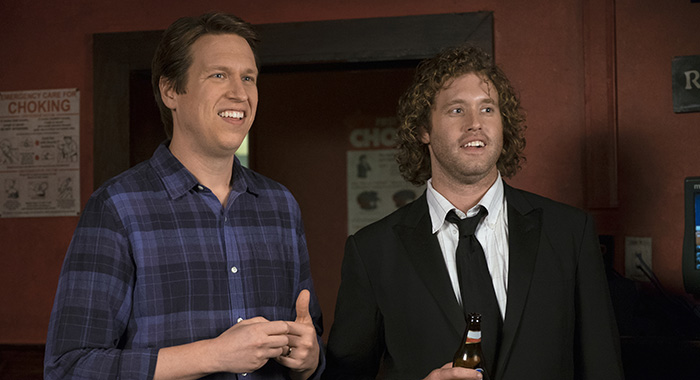 With most of the guest stars playing on-screen versions of themselves, we had to ask if they have been exaggerated for Crashing or if they are mostly staying true to what they’re really like. Holmes says by and large, the comedians are truly playing themselves.

“Some of them might have been nudged up a notch or two just to make it a little bit funnier. Something that comes to mind is TJ, in the second episode, becomes combative and argues with Artie about the order of the show and that’s something TJ would never do in real life. He’s representing an attitude that comedians have sometimes. So with TJ we definitely ramped him up a bit,” Holmes revealed. “But with Artie and Sarah and some of the others, that is almost exactly how they are. We’re not doing the thing that the great show Extras did, where we’re taking the character and what they’re known for and exaggerating it.” 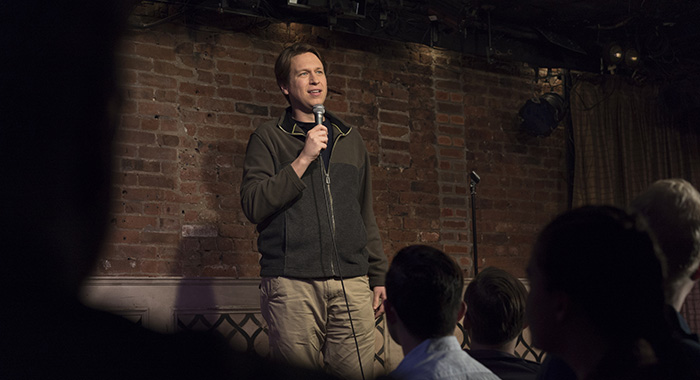 Another way the show is staying very true to life is highlighting Holmes’ penchant for clean comedy and peppering in references to his Christian upbringing and continuing spirituality. Holmes says that being openly religious can be a challenge in the world of comedy because “almost everybody that [he knows] in show business is an atheist or an agnostic.”

But what he’s been trying to do with his podcast, You Made It Weird, is to find common ground with his friends.
“What’s so funny when we push past those labels and we really talk,” he said, “like people say they don’t believe in God, and then you uncover that I don’t believe in that God either — the one that they’re not believing in — then you get to a nice space where people are appreciative of the mystery and the strange game that we’re all stuck in and all the different poetic and mystical and scientific ways to interpret that. I’m happy to say that given some time and the right format, I find that even my atheist friends and I have more in common than they originally thought.” 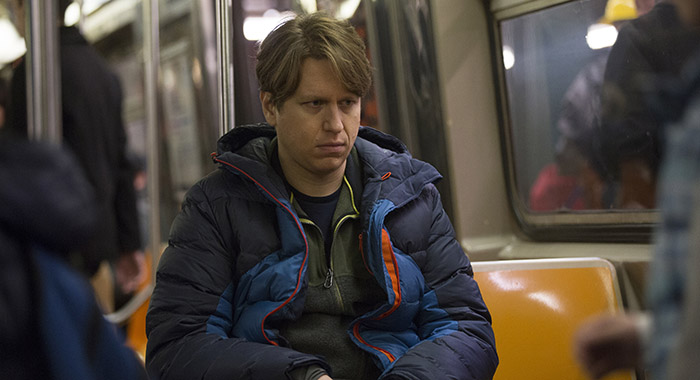 But he does agree that being a clean comic can be a challenge at times.

“I remember Jim Gaffigan, who is clean, he told me once that swearing is like steroids — it does work, but it’s not necessarily the most interesting way to do a good show or a good joke. I love swearing now, for me I just want to express myself as honestly as I can, and it turns out I enjoy swearing from time to time, but I don’t like doing comedy that I find ugly, things that are tearing things down and making people more upset or more fearful or whatever it may be. So even if I’m swearing, I like to keep it light in a certain way. But there’s no doubt in my mind that doing clean comedy is more challenging and can be more artful than someone painting with every color they can possibly paint with.” 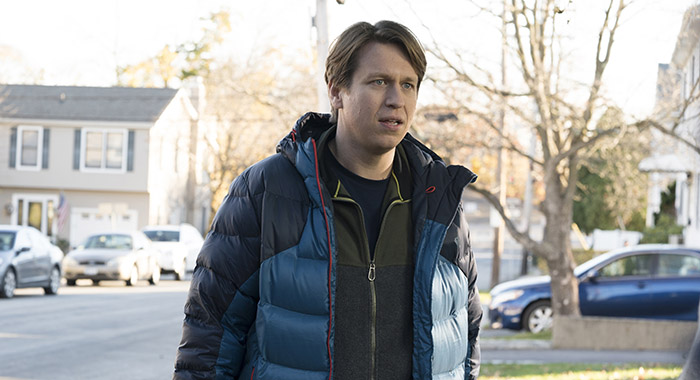 Holmes says that’s part of what Crashing is exploring: When you’re a clean comic starting out, you tend to stick out and not necessarily in a good way.

“Pete is trying to be a comic like Jerry Seinfeld or Ray Romano, and the truth is that when you’re starting out, it’s going to be three comedians talking about their genitalia and then there’s you. You don’t just get to start at Carnegie Hall with people in nice evening attire listening attentively,” Holmes said with a laugh. “You start in a shitty club and people are drunk, and if the past three people are talking about everything imaginable, and you’re trying to get people laughing about ice packs or cotton balls or something a little more cerebral — the truth is that it’s really hard, because nobody’s there to see you, so you just stick out like a sore thumb.” 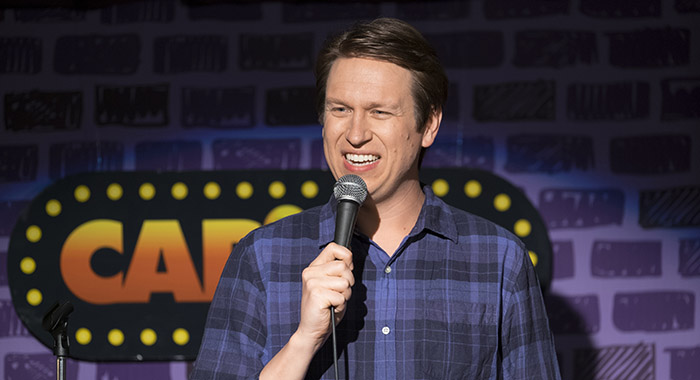 Holmes sticking out among his peers is something to like about Crashing, because instead of having him rocket to instant success, he bombs (repeatedly) on stage in the first few episodes. You don’t actually see him have a good night on stage until the fourth episode. It’s hard to watch because it’s it can be so true to life.

“That’s exactly what we’re going for. We’re trying to slow it down and tell the true story of what it’s like when you’re starting,” Holmes said. “The truth is — and I’m not the only one who says this — is that comedians are bad for five years. That’s the average, unless you’re Eddie Murphy or Dave Chappelle. Most people, myself included, are bad for at least five years. So we’re telling that story. You might have a good job here or have a good set there, but it’s surrounded by the very interesting and very funny struggle.” 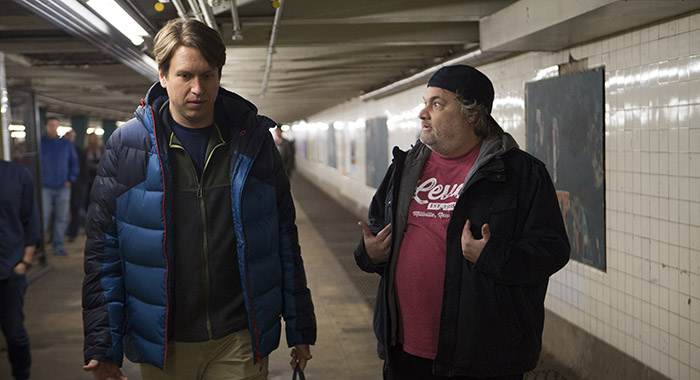 It might make people wonder how comedians don’t just quit after bombing night after night, but Holmes says to be a successful comic, you have to operate under a small bit of delusion when you’re starting out.

“Every comedian I know has a — this is a strange phrase — a healthy sense of delusion. Not ego, but a feeling that at some point if you just don’t quit, you’ll be better,” Holmes said. “I remember Mike Birbiglia, who is a consultant on the show, in his movie Sleepwalk With Me, he said that every comedian has to be delusional because you have to go up every night, do terribly, and then come off stage and go, ‘That went pretty well.’ And that’s true.

“Some comedians never get good, and they get what we call ‘laughter ears,’ a condition where you think you did well and you didn’t,” he revealed. “It’s a perversion of the little kernel of delusion that we each have.” 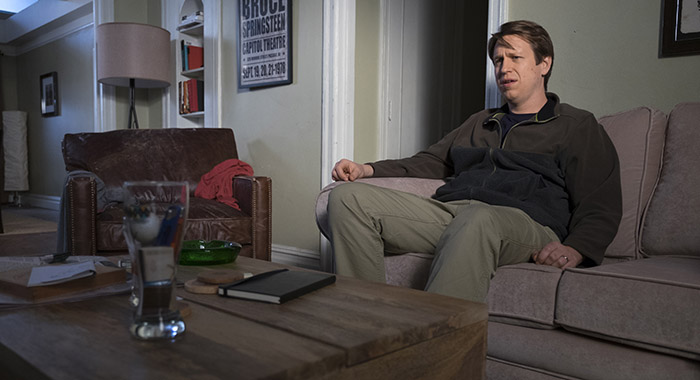 But it’s like a comedian says in episode four: If it sucks, you must be doing something right.

“It’s supposed to be terrible, and if it’s terrible, you know you’re doing what Jerry Seinfeld did and Louis C.K. did and Bill Burr and Sarah Silverman did,” says Holmes. “These terrible little breadcrumbs that let you know you’re on the right path, because talk to every comedian and they’ll tell you how hard it was starting out. But they’ll also tell you if you keep doing it, you’re bound to get better.”