The show's cast and creators preview the new season and a violent fascism that Alfred, Thomas Wayne, and Martha Kane fight against.

Could music icon David Bowie have experienced the same level of fame in the England portrayed in Epix drama Pennyworth? Creator Bruno Heller and executive producer Danny Cannon doubt it.

“I think he would be allowed to release that awful first album with ‘Laughing Gnome’ and all that,” Heller told Rotten Tomatoes when we talked to him, Cannon, and cast members recently. “He never would’ve met Mick Ronson, and he’d still be floating about singing about elves.”

Considering the program’s use of anachronistic music – like The Clash and Roxy Music – the disappearance of Bowie from the cultural scene may be the clearest indication of Pennyworth’s nightmare world. It is easy to image Lord Harwood’s (Jason Flemyng) vision of England has little room for him.

“I think David Bowie would probably be put into stocks and have vegetables thrown at him,” Cannon added. 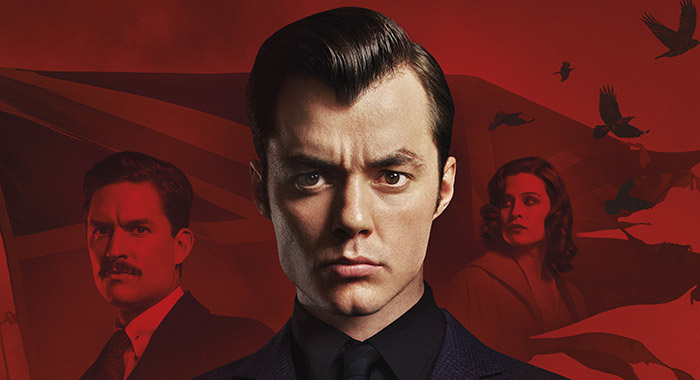 Despite the easy jokes about making a show centered on Batman’s butler, Pennyworth distinguished itself by re-framing the adventures of Alfred Pennyworth (Jack Bannon), Thomas Wayne (Ben Aldridge), and Martha Kane (Emma Paetz) against the style of the early 1960s and a thought experiment in which the English Civil War did not occur until the time of Queen Elizabeth II. The result was an unexpectedly satisfying debut season and an order for more episodes on EPIX.

When the program returns for season 2, one year has passed since Alfie, Thomas, and Martha stopped Harwood’s coup and rescued the Queen. It has also been one year since Alfred killed his father during the senior Pennyworth’s attempt to bomb the entire British aristocracy out of existence. In the ensuing chaos, Harwood, Bet Sykes (Paloma Faith), and her sister Peg (Polly Walker) escaped the Tower of London with Harwood resuming his attempt to take over the country. He may not have claimed the title of Lord Protector just yet, but with London, Manchester, and a few other smaller towns resisting his authority, the situation is pretty dicey. 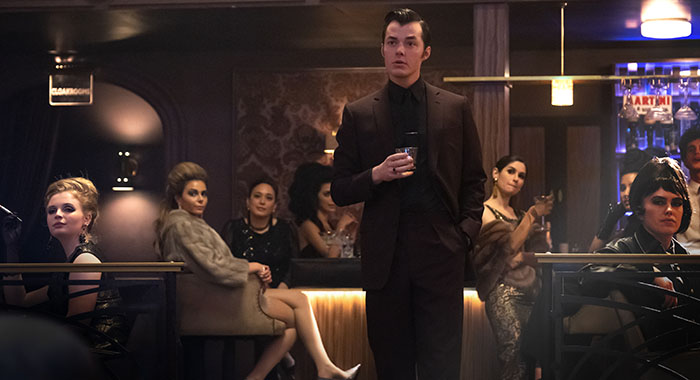 Meanwhile, Alfie has worked his way into running a nightclub.

“He’s taken it over from a good friend of his,” Bannon explained. “But really his main focus is to save up some money and get out of [England].”

The work keeps him busy and away from thoughts about his father. But considering he comes from a generation expected to just carry on through traumatic stress, Alfie’s nightmares linger, and Bannon doubts he’ll ever find help for his various issues.

“I think it would be something perhaps that he should look into,” he joked. “I’m sure if he lived nowadays in the modern world, he would look into it. Last year, it was something he was experiencing very much on his own and this year people are noticing perhaps that … Maybe not that he’s unraveling, but there are cracks appearing.”

The nightclub itself serves as a glamorous respite from the battles on the front line and another example of that British resiliency.

“We wanted London to reflect not just being at war, but the way that they could still celebrate and party in terrible circumstances, which is very British,” Cannon explained.

Bannon was, nonetheless, surprised when he arrived on set and saw how swanky the club turned out to be. Expecting a more rundown nightspot, he said, “Mark Scruton, our production designer, had got carried away basically and built this enormous club that was decadent and wonderful and brilliant.”

As one of the few new marquee sets, it stands out almost immediately. But the club, and the trouble Alfie gets into in the early part of the season, reflects a tougher challenge ahead — getting his mother to immigrate with him.

“She’s got to come with him to America,” Bannon said. “I don’t think he would leave her behind. The problem is convincing her that America is a good idea. That’s the hard bit for him.” 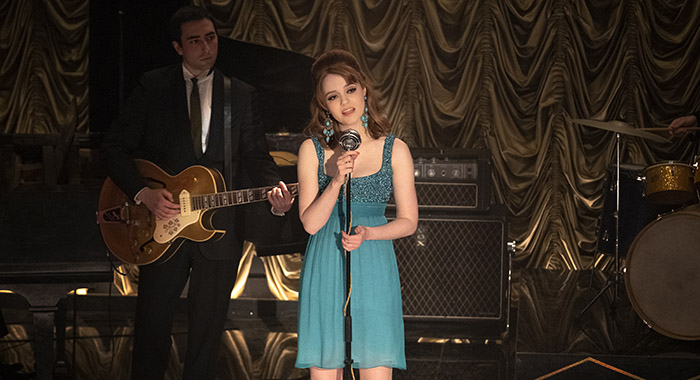 Also, for fans of Sandra (Harriet Slater), Bannon thinks Alfie loves her “in his own way,” but it may lead to other conflicts in the future— especially as Esme (Emma Corrin) is still the love of his life.

The deteriorating situation in England brings Thomas back to the realm. Now appointed the British station chief for the CIA, his assignment comes with an unspoken directive: the U.S. may be willing to back Harwood over the Queen if the tide of war turns in his favor.

“[Thomas’s] initial intentions of working with the CIA were for reasons that he believed in,” Aldridge said. “I think he’s gone on this journey [and] ending up incredibly cynical and detached from his work.”

It makes for a more conflicted Thomas than we’ve seen so far. Nonetheless, Thomas continues to exhibit a boyish nature Aldridge believes only comes out around Martha. 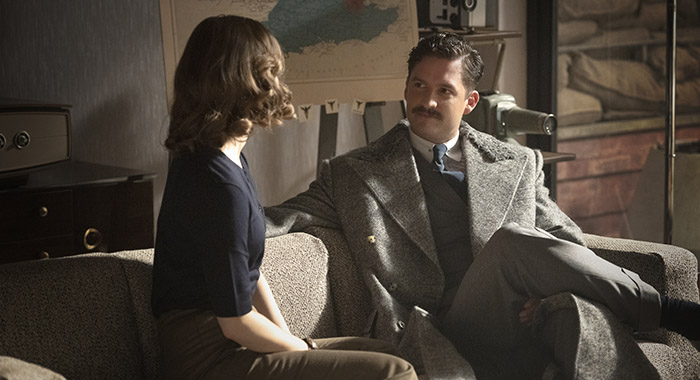 “He’s trying to do a very good job of playing an adult — I think he was even trying to play kind of older and more responsible than he is — but I think around her, there’s kind of an honesty switch that happens. He’s less able to bullshit her,” he said.

There’s also the possibility that the way he presents himself is all a cover for the “beast” Crowley (Jonjo O’Neill) discovered within him.

But Aldridge suggested the beast is more an echo of his son, saying, “I love that was brought into it, and the idea was that it’s something that he shares with Bruce.”

That said, working for the Company in his new capacity may force Thomas’s beast to reappear.

Fighting the good fight all this time, though, is Martha. In the wake of the season 1 bombing, she continued to ally herself with the remnants of the No Name League and the Queen’s loyalist coalition.

“She’s kind of willing to sacrifice anything for that, almost to like a selfish degree,” Paetz said. 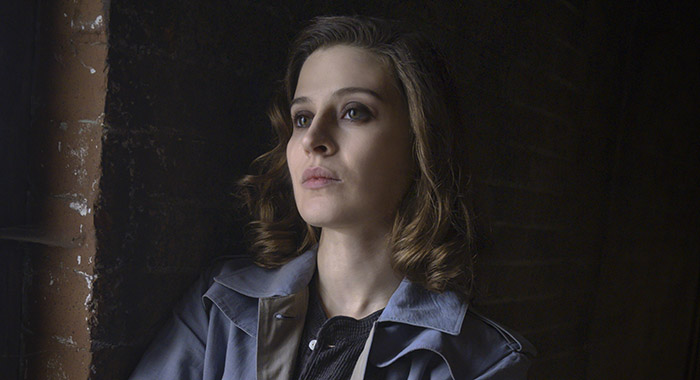 It means she spends plenty of time on the front lines. and it quickly becomes clear she likes the thrill of it all. Which leads to one question about future events: Will she be able to let that go some day to settle down in Gotham?

“I don’t think that she can really, entirely, now,” Paetz said. “It brings up questions like, ‘What does it mean to be a vigilante?’ [and] ‘Do you feel like you’re doing something for the good of everyone, or actually, is it satisfying something in you, because it feels good for you to do it?’ In theory, she’s fighting a very noble cause that she does believe in, but it really satiates something in her that doesn’t really have anything to do with the cause itself.”

Martha’s thirst for adventure and justice in the series represents one of the largest expansions of the character in any medium. A happy addition, to be sure, even if it seems at odds with Batman’s memories of her.

Although, it is always possible Bruce just doesn’t acknowledge the lives his parents led.

“A lot of people say to Ben and I, ‘Oh, there’s like this kind of almost stoic archetype that Thomas and Martha fall into, as his parents, how was it stepping into those roles?’ But I think that, to me, a lot of that seems like it’s centered around Batman in the comics,” Paetz said. “Thomas and Martha are [the memory] of someone whose parents had died tragically young, [and] is their idea of who they might’ve been — airbrushed and edited out and idealized, more than they actually were.”

If that is the case, it allows for Batman’s eventual parents to become more fully realized here than ever before. 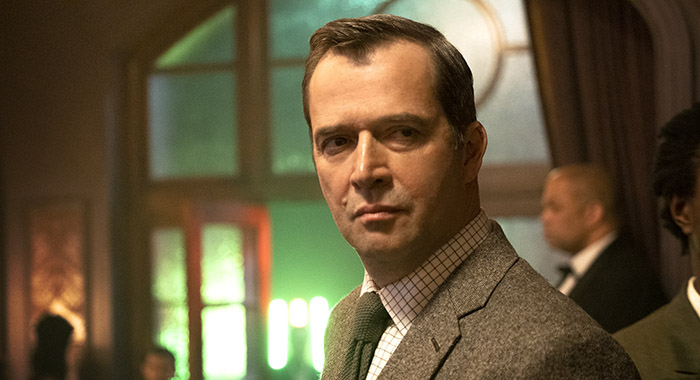 A handful of new faces will also be joining the show, including Simon Manyonda as Lucius Fox, Jessica De Gouw as Melanie — described by Heller as a “dangerous character. The more you’re attracted to her, the more dangerous she becomes.” — and James Purefoy as Alfie’s old commanding officer, Captain Gulliver Troy. He also happens to be Melanie’s husband, which will add another layer of danger to Alfie’s interactions with her.

But the first fresh face viewers will meet is Salt, a high value target to the Queen’s league played by Edward Hogg. Though unassuming in his first few scenes, Heller noted “authoritarians come in all shapes and sizes” when asked about the character.

“Everyone dismisses [someone like Salt] as too low class, too provincial, too vulgar, not a heroic enough a character. Those people can, especially in times of change, in times of conflict, push their way to the front,” Heller said.

The producer noted Hogg plays both “the very real, serious threat” hidden in the character and “an amount of pantomime villainy” necessary in a show sharing its ancestry with Gotham. 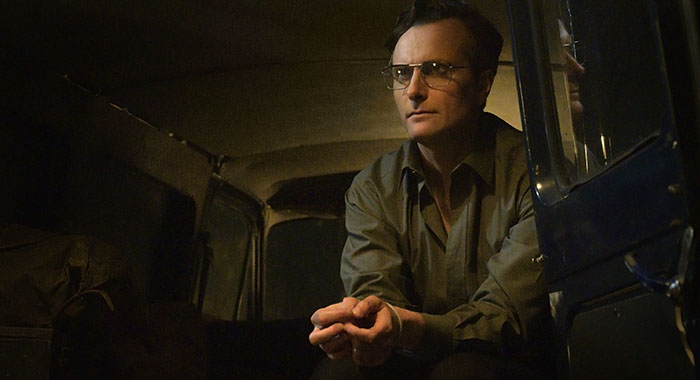 And much like Harwood, Salt represents part of the rising tide of fascism within the series’ antagonists. To Heller, fascism is a tough opponent to crack as it is seductive — “What man has not pictured himself in knee-high leather boots?” he joked — and noted even Batman exhibits certain fascistic tendencies in his war on crime.

“He doesn’t form a political party. He doesn’t make it political. He makes it personal,” Heller explained. “If you think the solution [to Gotham’s problems] is destruction, that’s sort of fascism. That’s the essence of it. Batman is precisely struggling with Christian charity and the old eye-for-an-eye stuff.”

Paetz, meanwhile, hopes the tide of authoritarianism can subside.

“Can anyone be inherently evil and therefore, will evil manifest itself in fascist forms of government throughout history? I hope the answer is no,” she said. “That people are not inherently evil, there is good, and we can nurture and fight our way out of this.”

Bannon joked: “Bruno keeps writing things that keep happening in real life and we keep begging him, ‘just write a nice world where everyone gets on and it’s all fine,’ but he keeps telling us that’s not very interesting for a TV show.”

Heller’s writing also makes the cast apprehensive about what they may find if the show ever moves to Gotham City. Paetz would like to see a kitschy America where “everybody is served by movie star.”

Aldridge admitted he wouldn’t want to see the myth of America dispelled, even if it seems at odds with the U.S. that Thomas actually knows.

“Whenever Thomas references Gotham, he says that it’s complete chaos on the streets,” he said.

Bannon, meanwhile, said, “I’ve stopped trying to guess things with Pennyworth because I always get them wrong, or anything I guess is by no means as exciting as what Bruno comes up with. So who knows? I mean, I dread to think.”

Thanks to the COVID-19 pandemic, EPIX will run four episodes across the next month. The final six episodes of season 2, which will feature the arrival of Batman’s ally Lucius Fox in larger role, will air later in 2021.