We go inside the exclusive event to learn how Quentin Tarantino plans to make history, which film is the true Oscar frontrunner, and who were the most conspicuous no-shows. 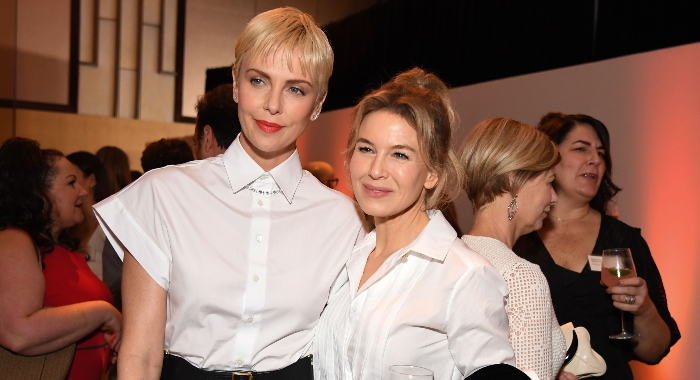 The Academy Awards held its annual nominee luncheon Monday at a new location, the Dolby Ballroom at the Loews Hotel in Hollywood. The Academy of Motion Picture Arts & Sciences made the decision two years ago to shorten this year’s awards season by two weeks, which resulted in the loss of their preferred home for the event, the Beverly Hilton.

A final chance to socialize with fellow honorees and snap the iconic class photo, the AMPAS luncheon is often touted as a highlight of the season. Littered with stars like Brad Pitt, Leonardo DiCaprio, Robert De Niro, and Charlize Theron, it’s hard to walk three steps without bumping into an iconic filmmaker. We spotted Matthew A. Cherry, director of animated short favorite Hair Love, snapping a picture with Knives Out director Rian Johnson and chatting animatedly with double-nominee Cynthia Erivo (Best Actress, Best Song), and Robert De Niro laughing with co-star Al Pacino in front of the DJ booth.

But the event isn’t just about star-gazing – though it definitely is that. Read below for our recap of highlights from this year’s Oscar nominees luncheon.

A shortened season keeps some stars away 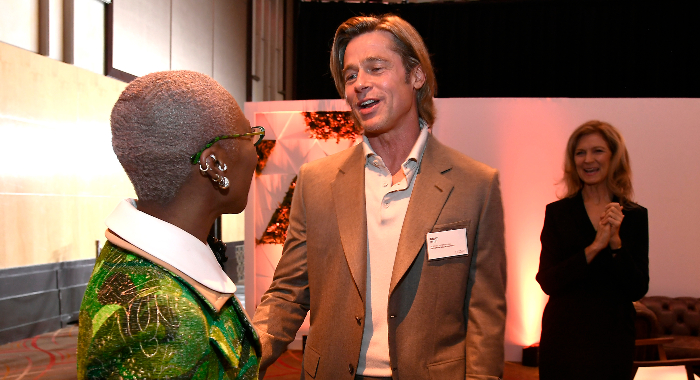 As always, the luncheon was a star-studded affair, but it was hard not to notice the note-worthy names who opted to stay home. Supporting Actor nominees Tom Hanks, Joe Pesci, and Anthony Hopkins did not attend, while Best Actor noms Antonio Banderas, Adam Driver, and Joaquin Phoenix also skipped the lunch. Banderas is still on the stage in Spain, while Driver just finished a week at SNL, and our media-shy Oscar frontrunner Phoenix (an advocate for the luncheon’s choice to feature a plant-based menu) is likely taking a breather before the last stretch. Bombshell nominee Margot Robbie, who’s currently on the Birds of Prey press tour, and Saoirse Ronan were also absent. Most shockingly, double nominee Scarlett Johansson stayed away from her first invitation to the event. Another unfortunate casualty of the shortened awards season is that many stars are likely too exhausted from the non-stop stream of parties, screenings, awards shows, and speeches. 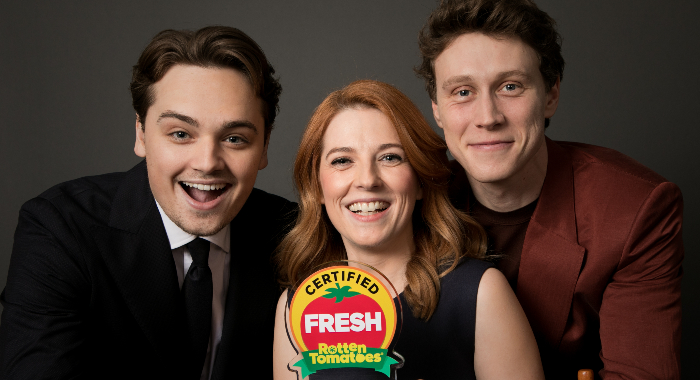 1917 stars George MacKay and Dean-Charles Chapman showed up to celebrate with cinematographer Roger Deakins, director Sam Mendes, composer Thomas Newman, and co-writer Krysty Wilson-Cairns who, were all nominated. The lack of acting nominations didn’t dampen the two young actors’ spirits, either. “Are you kidding? Today’s great!” said MacKay when we asked how he was doing before the event kicked off. And he has reason to be optimistic: 1917 has been raking in the hardware, recently adding a Producers Guild win and a Directors Guild win for the “one-shot” WWII epic. Mendes also seems to have finally embraced his frontrunner status; gone is the shocked expression he gave after his Best Director and Best Drama wins at the Golden Globes. The Skyfall director walked into the luncheon beaming, later snapping a comical photo with fellow nom Rian Johnson, who forwarded it to friend Edgar Wright, who then affectionately posted it on Twitter. Cinematography favorite Roger Deakins also took his buzz in stride, as is his famously laid-back nature; he has been here before, he joked, adding, “I just try to enjoy the day.” 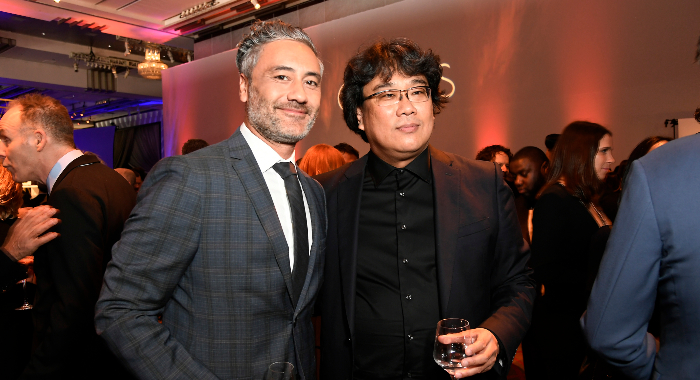 Last year, Lady Gaga was the biggest source of fascination for the Oscar elites. This year, that distinction falls to Parasite director Bong Joon-ho and his ever-present translator and fellow filmmaker Sharon Choi. Choi, who has been everywhere with Joon-ho this season delivering perfectly timed translations, joked that she might stumble at the finish. She told Rotten Tomatoes, “I am almost scared the Oscars is where I might finally mess up.” We’re betting that won’t happen, but we’re all but assured to see Choi on the Oscar stage and the film’s team will undoubtedly continue to own every room they step in. A constant of the season has been that when “Team Parasite” arrives, everyone – from Brad Pitt to Quentin Tarantino – takes notice. Parasite helmer Bong had to hop a flight to Rotterdam straight after the luncheon, where he is set to premiere a black-and-white print of his socio-political thriller at the Rotterdam Film Festival.

QT looks to make history with another Screenplay win 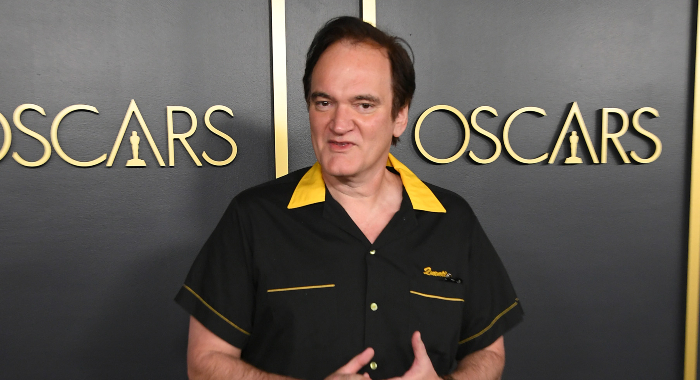 Once Upon A Time In Hollywood writer-director Quentin Tarantino also made an entrance, sporting a throwback bowling shirt and a pretty happy disposition considering the grind of the season. With a steady energy that hasn’t wavered over the past weeks, the two-time Oscar winner chatted animatedly with his fellow nominees and the assorted press. He told Rotten Tomatoes that he obviously hopes the film wins in every category, but the Best Original Screenplay Oscar would be especially meaningful for him. “It’s a historic thing… only one other guy has won three Original Screenplay Oscars,” he said. If he wins for Once Upon A Time In Hollywood, he would join Woody Allen (he’s the “one other guy”) and be on track to maybe surpass him with his rumored final film.

And the class favorites are… 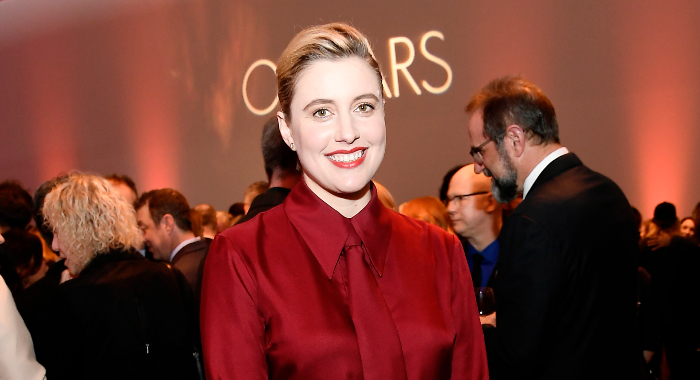 As we have said before, it’s slightly poor form to do too much prognosticating in a room full of nominees, but as the room is also filled with Oscar voters, one can take a sort of unofficial poll: who gets the loudest applause as they walk to the risers. Who were this year’s unofficial winners of “Most Popular?” Greta Gerwig and – no surprise – Bong Joon-ho.