11 Things to Expect on The Flash, Supergirl, Arrow, and Legends of Tomorrow

When there are four shows in the DC Arrowverse on The CW, how can you pick a favorite? Easy — make like PaleyFest and don’t choose. Instead of focusing on one of the superheroes, the week-long TV celebration invited cast members from Arrow, Supergirl, The Flash, and Legends of Tomorrow to participate in one panel alongside their producers.

Before the panel, Rotten Tomatoes spoke with Melissa Benoist, Grant Gustin, Candice Patton, Brandon Routh, and producers of all four shows on the red carpet, and they dished on the big week ahead for the Arrowverse — which includes The Flash musical crossover; Supergirl‘s impending reveal that Mon-El (Chris Wood) is the prince of Daxam; on Arrow, Oliver Queen’s (Stephen Amell) capture by Adrian Chase (Josh Segarra); and the Legends going to war.

Below, find 11 exciting developments coming up on Supergirl, Arrow, The Flash, and Legends of Tomorrow that we learned at Paleyfest, including season finale and future season plans! 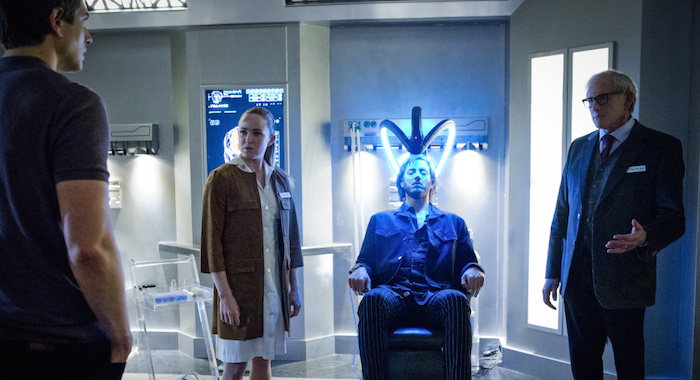 Legends of Tomorrow showrunner Phil Klemmer told Rotten Tomatoes on the red carpet that season 3 will reboot the Waverider with some new Legends, just like the team did in the beginning of season 2. Producer Marc Guggenheim revealed that one of those newbies is pre-existing, but with a catch.

Perhaps it’s time to start watching other DC-based movies and TV shows that invented original characters to narrow down who might be the new hero poised to join the team. “That’s what I would do,” Guggenheim suggested.

2. NO TIME TRAVEL, NO SPEEDSTER VILLAIN IN THE FLASH SEASON 4 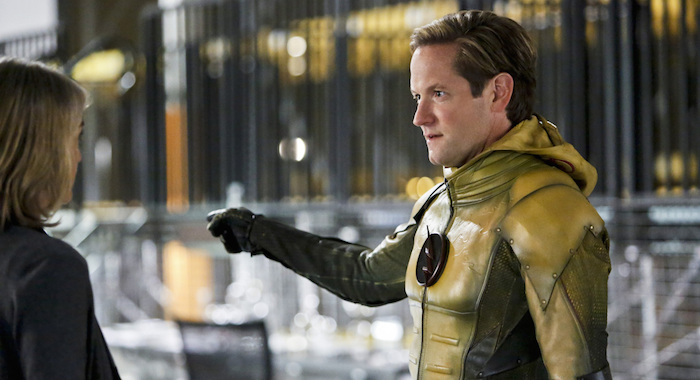 During the panel, producer Andrew Kreisberg said that regardless of which DC villain ends up being the big bad of The Flash season 4, it will not be another speedster. Considering the show has already seen Reverse Flash, Professor Zoom, and Savitar, that might be prudent.

“Next season we’re not going to have a speedster as the villain,” Kreisberg said on the panel.

On the red carpet, day-to-day showrunners Todd and Aaron Helbing said they also expect to back off the time travel and alternate reality concept next season. “We haven’t really talked that much about season 4 yet, but I don’t think we’re going to do as much time traveling,” Todd said.

Added Aaron, “We like playing with the timelines and the different time periods and future and past. For now, I think we’re going to focus on the present.”

3. WHY KARA TOLD MON-EL “THIS CHANGES EVERYTHING”

The teaser to this week’s Supergirl revealed guest stars Teri Hatcher and Kevin Sorbo hailing Mon-El as the prince of Daxam. Kara (Benoist) tells him, “This changes everything.” On the red carpet, Benoist elaborated on why Kara feels Mon-El’s title changes things.

“Well, when you find out that the person you love hasn’t been honest with you about who they really are, and when you disagree so wholeheartedly with the way they were raised and where they come from, it’s not going to bode well for them romantically,” Benoist said. “The title definitely stirs up some old feelings. Kryptonians and Daxamites do not agree. It’s a little Hatfield/McCoys, Romeo and Juliet sort of thing.”

On the panel, producers of The Flash said that the musical episode is not just a gimmick. It addresses where both Barry (Gustin) and guest star Kara are in their love lives, and Todd Helbing explained why the musical fantasy is a period piece.

“Music Meister transports whoever he whammies into a universe that they create,” he said. “Why they’re in the musical stems from something that was born out of Barry’s childhood.”

On the red carpet, Benoist and Gustin described filming the ’20s-style song-and-dance numbers.

“I had been in Thoroughly Modern Millie and we sort of sometimes did genre songs on Glee,” Benoist said. “We did ‘Diamonds are a Girl’s Best Friend’ so sometimes we got to dress up and be in period clothes. This time, being so immersed in that world was awesome.”

Gustin’s fast feet came right back to him in real life. “I started as a tap dancer as an 8-year-old and did it until I was 17, and haven’t tapped really in 10 years,” Gustin said. “They sent me a video of all the choreography and I started to run over it at home. My feet were figuring it out before my brain was.”

Iris West (Patton) appears in the musical as a different character named Millie Floss. “I’ve got a wig situation,” Patton said on the red carpet. “She’s completely different and she’s very much a part of helping Barry and Kara remember that love is the most important thing.”

Showrunner Aaron Helbing said two of the five original songs written for the episode should be available on iTunes or the CWTV website after the episode airs.

5. THIS WEEK’S ARROW GETS DARKER THAN THE TEASER

The teaser for this week’s episode shows what happens to Oliver after Adrian Chase finally captured him: torture. Arrow showrunner Wendy Mericle told Rotten Tomatoes on the red carpet just how dark it gets.

“Oliver goes through arguably the toughest thing he’s ever been through with Adrian Chase,” Mericle said. “Stephen gives this performance that he’s more or less broken at the end of the episode.”

6. THERE’S HOPE FOR BARRY AND IRIS ON THE FLASH 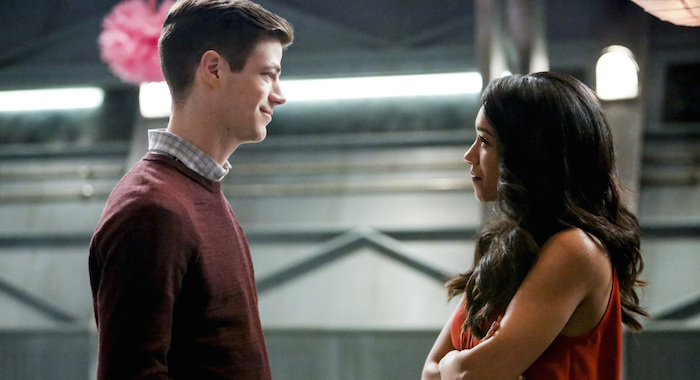 Barry has always loved Iris, but his proposal might’ve ruined the future they had together (since he only popped the question in an attempt to change the future and save her life). On the red carpet, though, Patton said she still has hope for the couple.

“I think for Barry and Iris there’s always a way to come back,” she said. “They are really and truly each other’s true loves. They just have to get on the same page and stick with it.”

Todd Helbing added that the musical episode gives a hint as to where Barry and Iris are heading. “You’ll see at the end of the musical where Iris and Barry are,” he said. “It sort of kickstarts the last six episodes. There’s another episode further down the line were Barry does something to get a key piece of information to help them, and that really snowballs into the last couple episodes.”

7. THE ARROW FINALE IS DIFFERENT THAN ANY OTHER SEASON 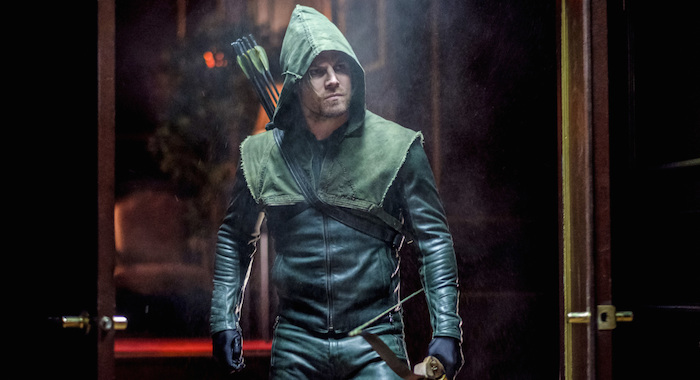 Arrow is now in its fifth season, so by now fans noticed a particular formula for each of the prior four season finales. But with Adrian Chase/Prometheus as the villain, Mericle said Arrow is changing it up.

“I’ll just say this: Star City is not in jeopardy,” she said on the red carpet. “As we’ve joked before, there’s always a terrorist attack on Star City in May. Not this time. Prometheus is a very personal villain, very psychological villain and the ending will be appropriate to that.”

Arrow also introduced Talia al Ghul (Lexa Doig) this season, and her presence could complicate things for Oliver by the end of the season. Producer Marc Guggenheim said it runs in the family.

“I would say that she probably bears more of a resemblance to her father than [her sister] Nyssa does,” Guggenheim said.

8. THE CW WANTS A FOUR-WAY CROSSOVER EVERY YEAR 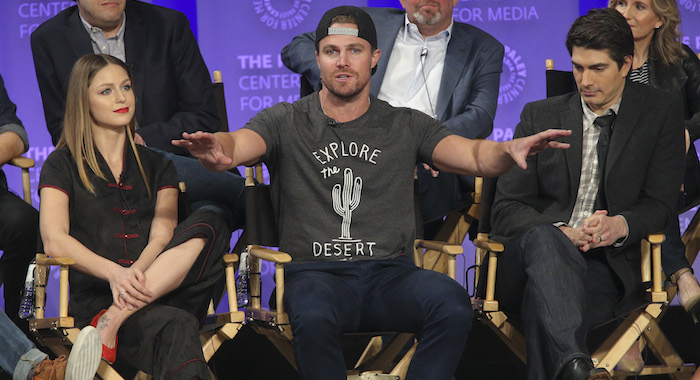 With Supergirl on The CW, the network managed to stage a four-show crossover in the Fall. While the producers admit scheduling crossovers is difficult, they’ve still got more ideas. They may not have a choice, either.

On the panel, Amell shared a story of a dinner he had with CW president Mark Pedowitz. “I say, ‘Mark, we’re gonna do a crossover every year, right?’” Amell recalled. “He goes, ‘You’re f—ing right we are.’”

Kreisberg felt the “Heroes Vs. Aliens” event was not the best they could do. “We’re going to try to do a real, true four-way crossover with all four shows,” Kreisberg promised on the panel.

9. ABRA KADABRA AND A VISIT TO THE FUTURE ON THE FLASH 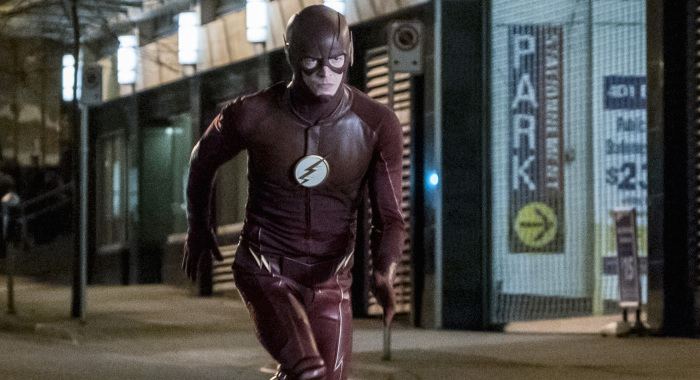 Teasing some of the post-musical episodes on The Flash, Kreisberg said on the panel that DC villain Abra Kadabra would play a major role in defeating Savitar.

“[Episode] 18 has Abra Kadabra, who’s also a villain from the future,” Kreisberg said. “He knows who Savitar is and it becomes a moral conundrum to Barry and the team to let Abra Kadabra go in order to get Savitar’s identity. It’s one of those great morality plays. Can you be a hero if you do one bad thing for the greater good?”

In the following episode, Barry himself goes to the future. “Nineteen is called ‘The Once And Future Flash,’” Kreisberg said. “Barry decides that the only way he can find out what he needs to know is in the future.”

10. LEGENDS GO BACK TO WWI, THEN AN ALTERNATE REALITY 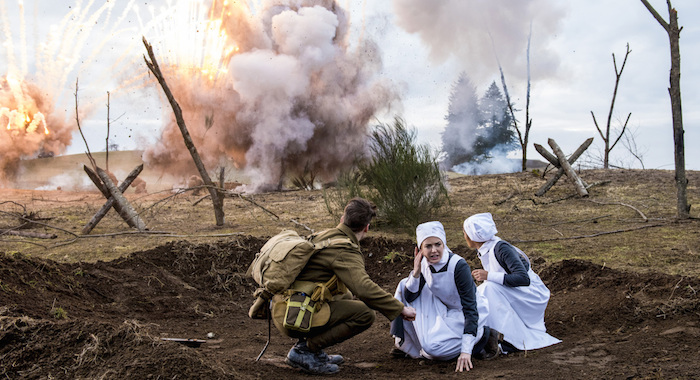 The Legends of Tomorrow go back to World War I this week. On the red carpet, Routh said to expect some trench warfare. “We’re in trenches, which is pretty cool,” Routh said. “They built trenches and that was kind of fun to be in.”

Klemmer added that before the end of the season, the show plays with reality beyond time bending. “We’re going to get into some very strange, mind-bending, experimental alternate kind of reality action,” Klemmer said.

11. THERE’S HOPE FOR FELICITY ON ARROW 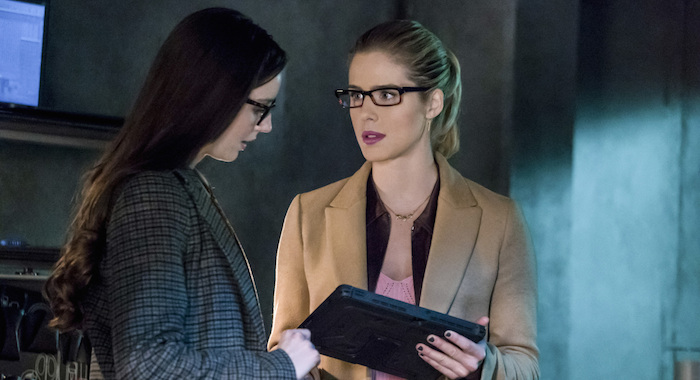 Working with an ex is complicated, as exemplified by Felicity’s (Emily Bett Rickards) Team Arrow conundrum. But just because she’s accepted the invitation to join Helix doesn’t mean there’s no hope for her to find a way back into the light.

“She got involved with Helix and she’s now in this really dark space,” Mericle said. “We’re going to see how she comes out on the other end of that. There’s always hope on Arrow. As dark as we get, ultimately I think there’s a lot of hope on the show.” 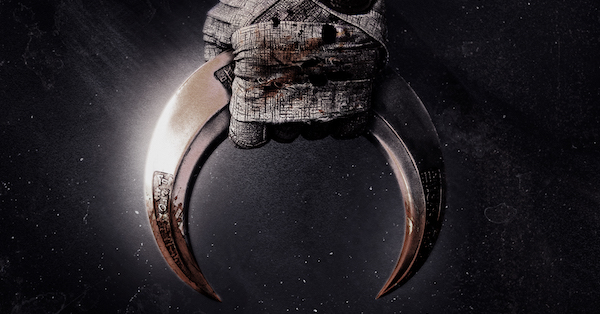